Bulla Regia
(detail of the theatre at Thugga)

The only attraction in the immediate neighbourhood (of Jendouba) is the ruined city of Bulla Regia, called Henchir Hammam Darradji by the natives, situated about 7 kil. from the station, at the foot of Djebel el- Arabia, one of the hills which bound the north side of the valley of the Medjerda. Its position was no doubt determined by a copious spring of sweet water, which, in this region of brackish rivers, was a priceless treasure. It was probably the residence of some of the Numidian kings, and it subsequently became a "liberum oppidum" (free town) under the Romans. It is mentioned in the Itinerary of Antonine (a directory of Roman roads) as a station on the route from Hippo Regia to Carthage; but beyond this, little is known of its history, and there are no inscriptions existing on the spot as at Chemtou (Simitthus).
1895 Murray's Handbook for travellers in Algeria and Tunisia 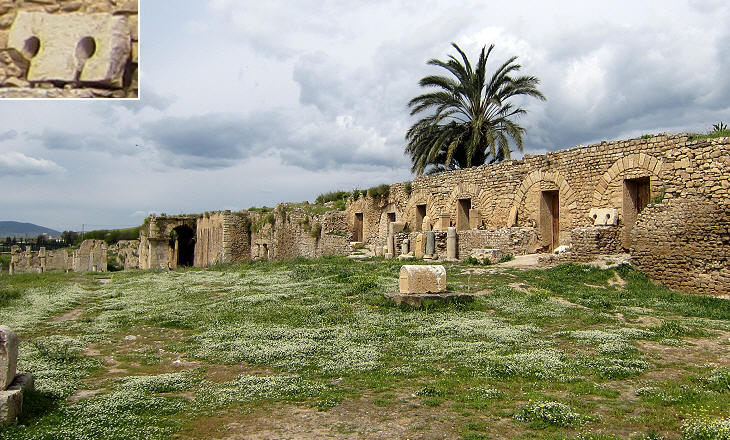 In 1877 a French company started the construction of a railway from Tunis to the border of Algeria through the Mejerda River valley. In 1879 the railway reached Jendouba, a provincial town near the border. The construction of the railway led to the discovery of the ruins of Bulla Regia and to some extent to their destruction.
Immediately in front of a nymphaeum was an archway built of large blocks of very compact and finely cut limestone. This was destroyed in the most reckless manner to supply building material for the railway. (..) There are many other edifices, some of great size. One has all its chambers and vaulted roofs in perfect preservation, and was used as a residence by the workmen engaged in laying down the water-pipes. Murray
Today the first thing of Bulla Regia a visitor sees is a series of eight contiguous cisterns of great size which are used as warehouses. 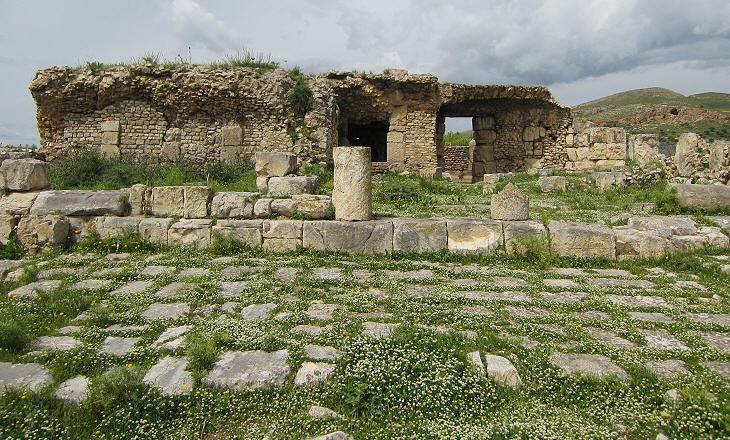 Bulla Regia was the capital of a small Numidian kingdom which was included in the Roman Province of Africa in the Ist century BC. It became a municipium at the time of Emperor Augustus and a colonia (the highest status of Roman cities) at that of Emperor Hadrian who granted Roman citizenship to its inhabitants.
Bulla stands on the slope of a hill. The main buildings were situated in the lower part of the town, while in the upper part archaeologists have unearthed a residential neighbourhood. Lower down the valley are the Thermae. Like all the other buildings here, this has been destroyed by an earthquake; huge masses of masonry lie around, disjointed and overthrown, in a manner that could not have been effected by any other agency. One high arch still remains entire. As the rest of the structure is buried in debris nearly to the crown of the vaults, there is great hope that valuable works of art may one day be found here; in the meantime the earth and the ruins that encumber it ensure their preservation. Murray 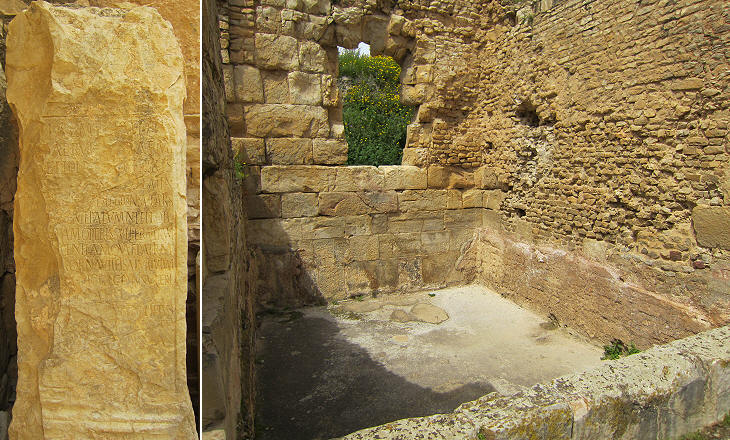 Baths: (left) inscription with the name of the donor; (right) a hall with a "natatio" (pool)

At the beginning of the XXth century the baths were cleared from the debris and an inscription was found which provided some details on their construction. They are dated early IIIrd century as they were built by Julia Memmia, daughter of Memmius Julius Fidus Albius, a native of Bulla Regia who was appointed suffect (additional) consul by Emperor Commodus in 190. 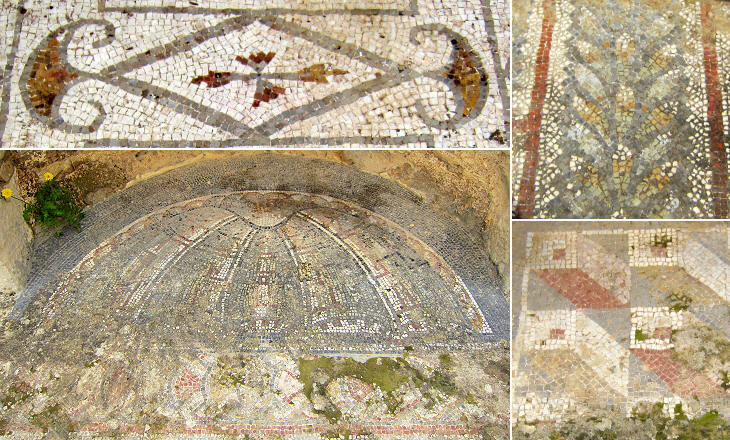 Mosaics of the Baths

The fragments of mosaics found at the baths are of a geometric/decorative type; it is possible that those which depicted pagan deities or mythological episodes (similar to those found in the private houses which are shown in page two) were removed in the VIth century, during the Byzantine tenure of the town. 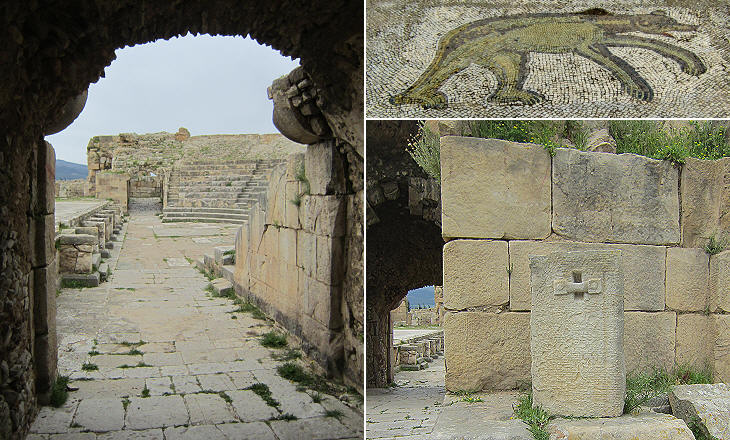 Theatre: (left) side entrance; (right-above) mosaic portraying a bear, (see a mosaic depicting the beasts which fought in the amphitheatres); (right-below) a pillar with a hole for tying horses similar to those found at Sicca Veneria in Jamaa El-Kebir

Between the spring and the baths, but a little to the east, is the Theatre also much buried in earth. One can descend in some places into the corridor and form a good idea of the nature of the building. The masonry is of the finest cut stone. The Auditorium is entirely filled up. Murray
Around 400 St. Augustine, Bishop of Hippo Regius (today's Annaba in Algeria) visited Bulla and addressed the local Christian congregation in the theatre. There he urged his fellow Christians to forsake the model of Carthage and its urban mass entertainments and to embrace instead the one presented by the citizens of Simitthus who elected to follow a path of virtue by closing down their local theatre.
In his sermon (301.1) he mentioned prostitutes and salacious plays by mimes as being something for which the town had a reputation.
O fratres Bullenses, circumaquaque prope in omnibus civitatibus vicinis vestris lascivia impietatis obmutuit. Non erubescitis, quia apud vos solos remansit turpitudo venalis? An delectat vos, inter frumentum, vinum, oleum, animalia, pecora et quaecumque in romanis, vel nundinis venundantur, etiam turpitudinem emere et vendere? Et fortassis ad talia commercia huc veniant peregrini, et dicitur: Quid quaeris? Mimos, meretrices? Bulla habes.
(Rough translation) Brethren of Bulla, impious behaviours have disappeared in almost all the towns surrounding yours. Are not you ashamed that only at Bulla these behaviours are allowed? Or perhaps are you proud to sell them together with wheat, wine, oil, sheep and all the other commodities you supply to Rome and markets? Having heard about them foreigners come to Bulla and you ask them: "What are you looking for? Mimes, prostitutes? Bulla has them. 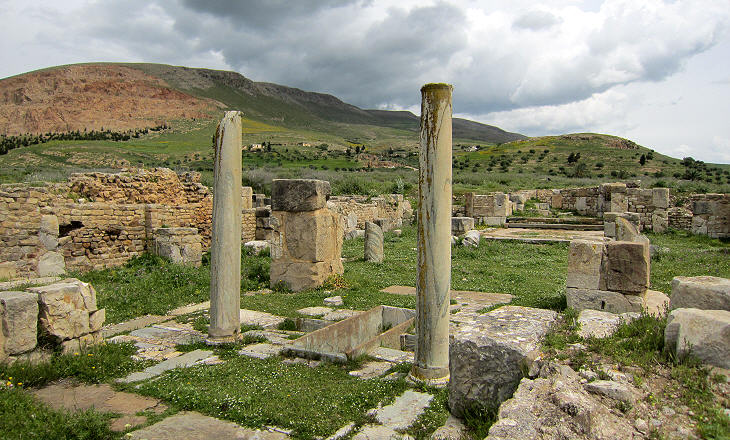 Christian basilica: in the foreground two "cipollino" columns and a baptismal font; the image used as background for this page shows a mosaic at the basilica

Archaeologists have identified the site of the Forum of Bulla and of a series of temples behind the theatre. They are marked by the presence of a few broken columns and reconstructed steps, whereas the statues of gods and Roman emperors which were found there were moved to the Museum of Bardo in Tunis.
Apparently the temples were not turned into churches, because these have been identified in a different area of the town. 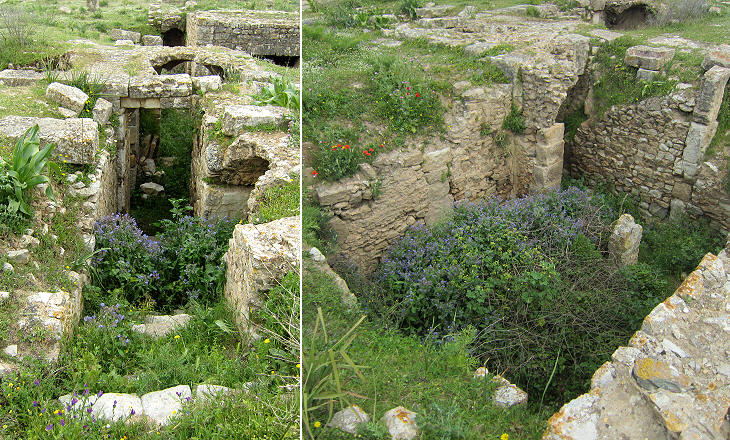 Poor maintenance away from the recommended tour

A series of highly decorated houses which were partly built underground constitutes the main attraction of the archaeological area. Unfortunately those which are not along the path leading to the House of Amphitrite, the "must see" of Bulla, are not properly cared for.

Move to page two and see the houses which are properly maintained.