Carthago (Carthage): Punic memories
(detail of the theatre at Thugga)

Queen Dido's curse on Aeneas and his descendants (the Romans) ended with the destruction of Carthage in 146 BC at the end of the Third Punic War.

(left) Bourghiba Avenue, the main street of today's Carthage; (right) map of the archaeological sites of Carthage covered in this section

Carthage was rebuilt by the Romans in the Ist century BC and destroyed a second time by the Arabs in 698. Today a few remains of the ancient city can be seen in the modern elegant quarter of Tunis which was built in the XXth century. It stretches for several miles along the coast and only the very rich can afford to live there. Ancient columns were placed here and there to embellish its avenues. 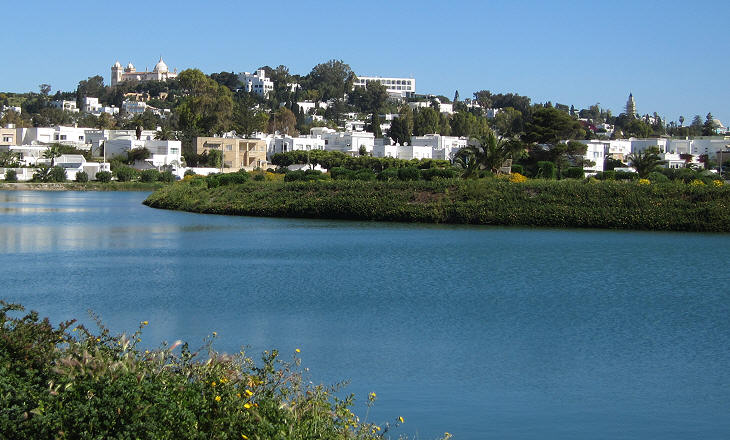 Site of the ancient Punic military harbour and in the distance Byrsa, the acropolis of Carthage, where the French built a huge cathedral dedicated to King St. Louis IX who died at Tunis in 1270

When the Romans destroyed Carthage they burnt all the facilities of its two harbours, but because eventually they had to rebuild them to house a large mercantile fleet, their location is still clearly identifiable. The military harbour was dug to form an artificial circular island around which the ships were moored. It was protected by high walls so that the merchants could not see what was going on from the nearby commercial harbour. 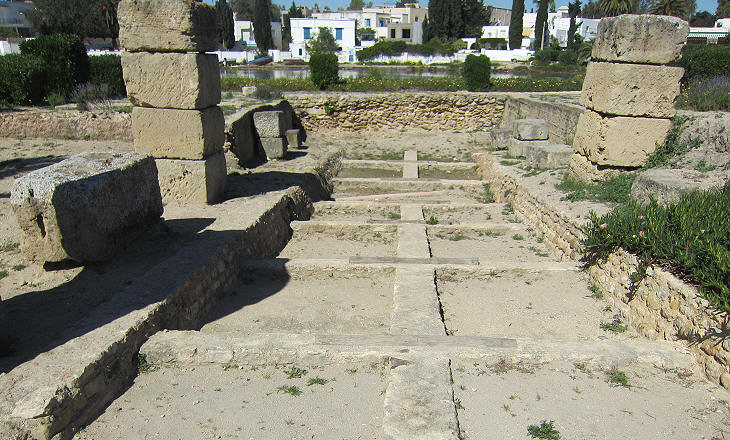 According to Roman historians the shipyards of the military harbour could house more than two hundred ships. The fleet was the main defence of Carthage and the most trusted one, because the army was mainly manned by mercenaries. The Carthaginians were of Phoenician origin and even centuries after the foundation of the city, power was entrusted with families of Phoenician descent. For this reason Carthage could not rely on the wholehearted support of other towns of the region which had accepted its hegemony, but resented the ethnic-based Carthaginian power system. 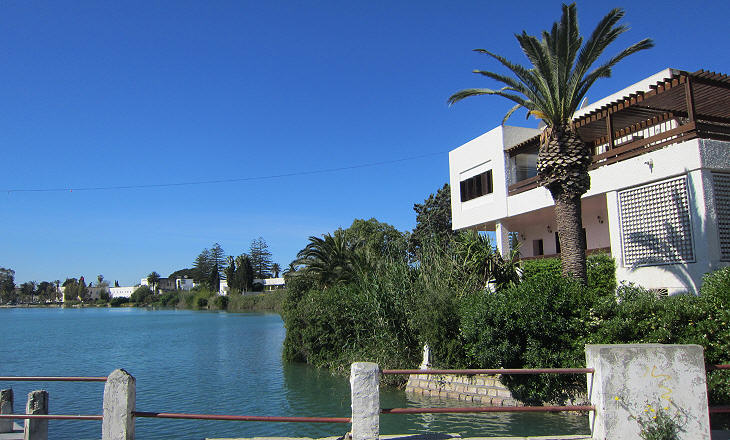 The commercial harbour was much larger than it appears today. It had a rectangular shape. A narrow passage gave access to the military harbour, similar to what can be noticed in the Phoenician harbour of Mahdia. When the Romans destroyed Carthage they established their first province on African soil and set the residence of the Roman proconsul at Utica, an allied town at the mouth of the Mejerda River. Over time however the harbour of Utica silted and Carthage became the main port from which grains were shipped to Ostia (you may wish to see the mosaic of the Carthaginian shipping agency at Ostia). 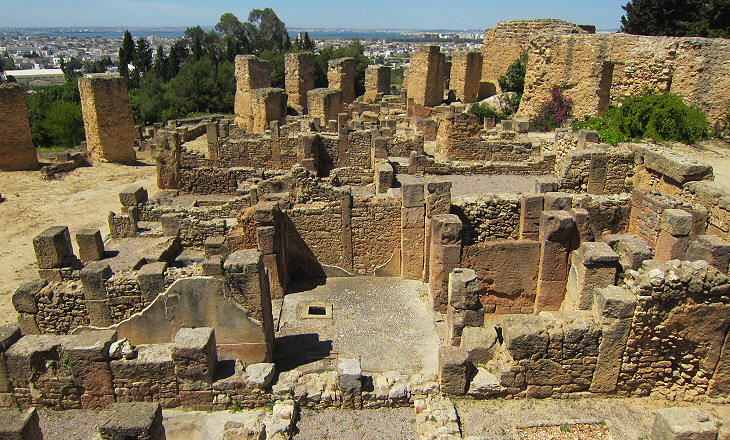 Archaeologists found out that the terraces upon which the Roman forum stood were supported in part by walls of previous buildings and they unearthed a small section of the Punic city. It appears that the houses had several storeys; rooms and courtyards were rather small which indicates that the city was overcrowded. According to tradition, Queen Dido, the founder of Carthage, was allowed by the local king to build her city on the piece of land covered by an oxhide. Dido cut the hide into a continuous string and with that she surrounded the top of a hill overlooking the sea. Probably the account originated from the relatively limited area of the Punic city. Each house had the shape of a long rectangle; a hall after the entrance was the public area of the building. At its end steps led to the upper storey where the bedrooms were situated, and a passage to a small courtyard which was the main source of light. A channel for eliminating household waste into sewers in the street is very evident. The floors were made with broken terracotta jars which were mixed with small pieces of white calcareous stones. You may wish to see Kerkouane, the only example of a Punic town which was not modified by the Romans. 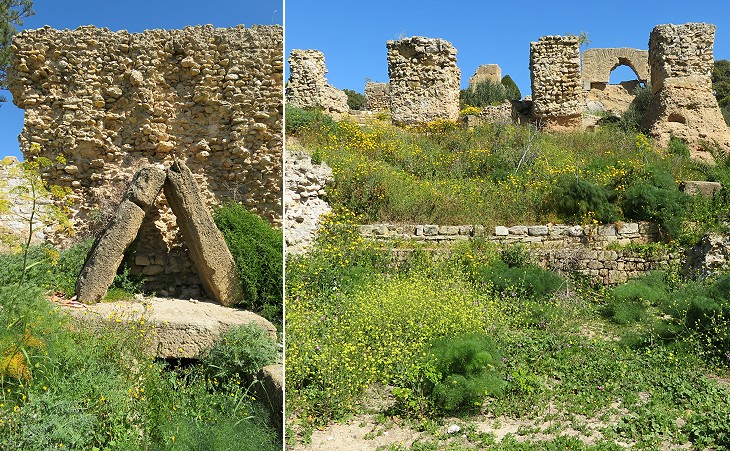 Byrsa - Acropolis: site of a necropolis near the Punic quarter

This necropolis is dated VIth/Vth century BC so it belongs to the initial phase of the development of the town. The "official" date of the foundation of Carthage is 814 BC, but initially it was just one of several colonies founded by seamen from Tyre until the influence of the latter town declined in the VIth century BC. In the Vth century BC Hanno, a Carthaginian general explored the coast of Africa beyond the Strait of Gibraltar. He is said to have founded colonies along the coast of Morocco. Other Carthaginian colonies were founded in Algeria, Spain and Sicily. 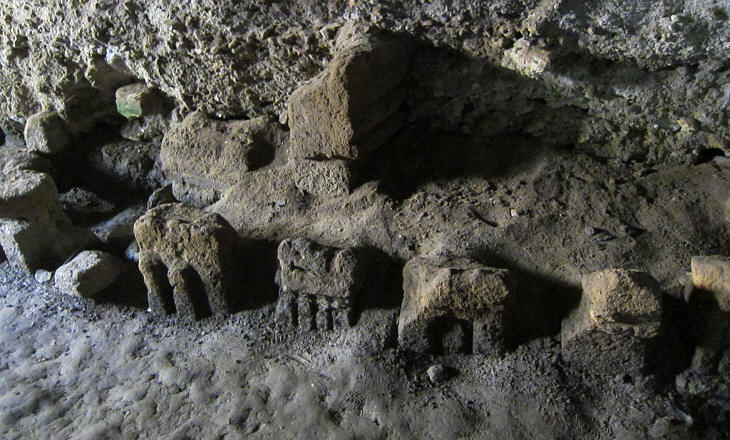 Tophet: layers of tombs still to be excavated

In 1862 French writer Gustave Flaubert, the author of Madame Bovary, published Salammbo, a historical novel set at Carthage after the First Punic War. In Chapter XIII he described the sacrifice of infants to end a drought: the babies were placed on the hands of a bronze statue of Baal, the main Phoenician god, from which the priests made them fall into the fire. Flaubert based this part of his novel on the accounts of some Roman sources and chiefly of Tertullian, an early IIIrd century AD Christian author from Carthage.
In 1921 the discovery of a large cemetery containing the charred bones of infants near the harbours of Carthage seemed to confirm the Carthaginian practice of sacrificing their first male child. The cemetery was called Tophet with reference to the biblical term which indicated the site near Jerusalem where the Canaanites sacrificed children by burning them alive. 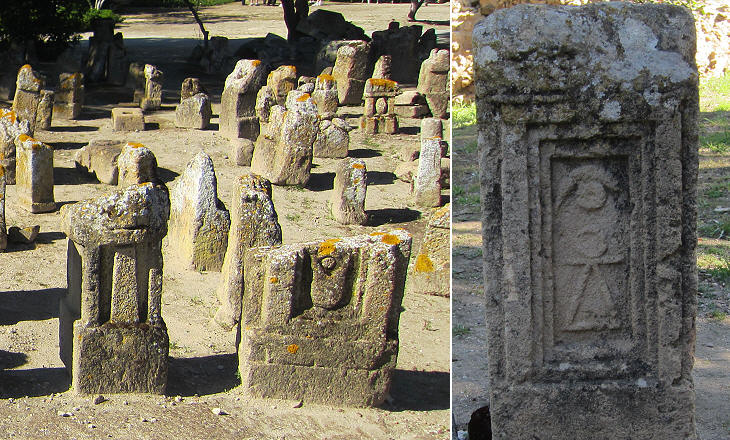 Tophet: tombs of different shape and belonging to different periods some of which show a relief of Tanit, a Carthaginian goddess and of her symbols: a half-moon and the sun (see her symbol in a house of Kerkouane)

Today the Carthaginian practice of sacrificing children is questioned. It is not mentioned by Livy, nor by Virgil. Tertullian, a Christian, wrote about the practice in a text in which he defended his fellow co-religionists from a similar charge, rather than in an essay on the history of Carthage. Some archaeologists take a middle-of-the-road stand by claiming that the Carthaginians might have sacrificed stillborn babies or those who died immediately after birth.
The image used as background for this page shows a reconstruction of the maritime walls of Carthage by the German Archaeological Institute in Rome in the Museum of Carthage on the Acropolis.

Move to: Carthage - Roman period or Carthage in the Museums