Byzacium (*), a district of Africa, is a champaign country of such singular fertility as to render grain one hundred and fifty fold.
Pliny the Elder - The Natural History - Book XVII - Translation by John Bostock and H.T. Riley
The many parts which I have seen of the ancient Bizacium (*), or Winter circuit, fall vastly short in fertility of the character which has been attributed to them by the ancients.
Thomas Shaw - Travels or Observations relating to several parts of Barbary and the Levant - 1738
(*) a reference to Valeria Byzacena, a new province which was created by Emperor Diocletian when he reorganized the territorial structure of the Roman Empire in 285-292 and which corresponded to today's Central Tunisia. Mactaris is situated at 3,000 ft on a plateau which is part of Dorsale Tunisienne, a range which separates the fertile valley of the Mejerda River to the north from semi-arid areas to the south. In antiquity this climatic distinction was not as considerable as it is today and Central Tunisia was extensively farmed. In addition to climatic changes which have affected Northern Africa, the abandonment of traditional agricultural activities is a consequence of the invasion of the Banu Hilal in the XIth century. They were Bedouin tribesmen from Arabia and they spread nomadism where agriculture had been dominant. 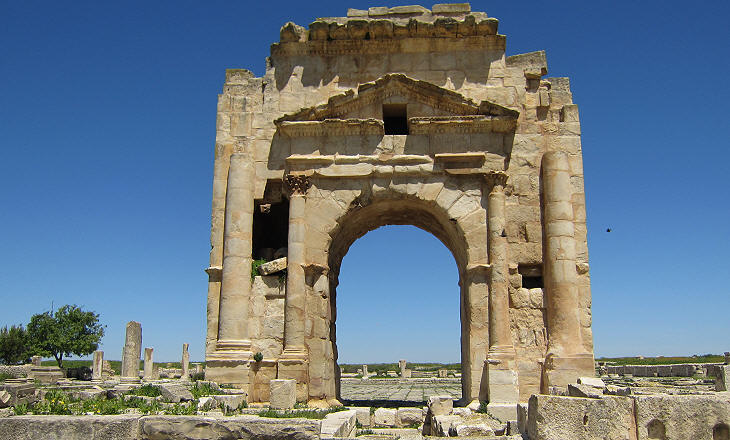 Mactaris was most likely a Numidian fortress because of its position almost at the highest point of the plateau. After the end of the Third Punic War, its population was increased by refugees from Carthage.
Similar to many other towns of the region, Mactaris experienced a period of economic growth in the late Ist century AD which led its inhabitants to build a new large forum at the entrance of which they built an arch. 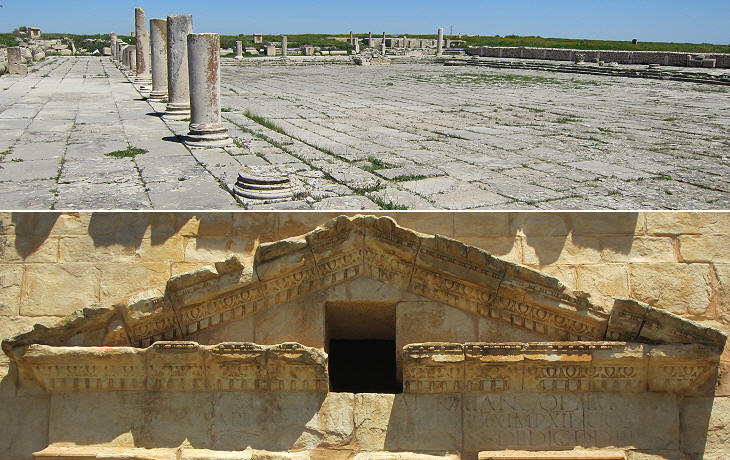 The arch was dedicated to Emperor Trajan, who had granted Roman citizenship to the most important inhabitants of Mactaris. The arch was erected by the proconsul of Africa, but it was paid for by the local community.
It was built in 115, the very last period of Trajan's reign. A comparison of the inscription with that of Colonna Traiana in Rome shows that at Mactaris the epithet "Parthico" (a reference to the last campaigns of the emperor) replaced "Dacico" on the column (a reference to the Dacian wars).
You may wish to see other triumphal arches in Africa: at Musti, Pheradi Majus, Sufetula and Thugga in Tunisia, at Cuicul and Thamugadi in Algeria, at Volubilis in Morocco and at Oea (Tripoli) and Leptis Magna in Libya. 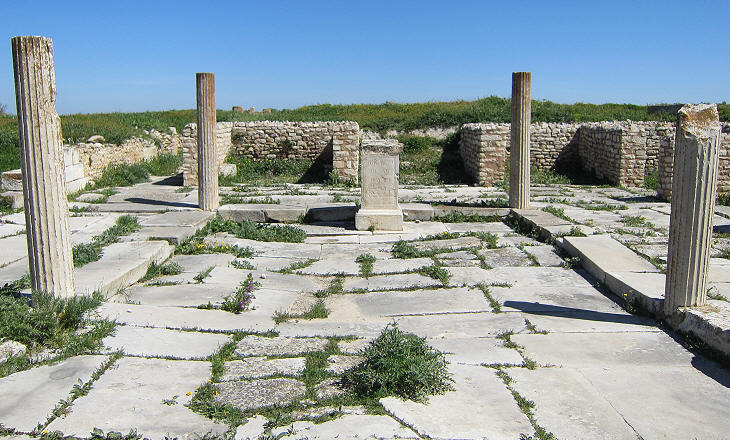 The Forum was adjoined by a marketplace where tradesmen built a temple to Mercury as they did at Thugga and Thuburbo Majus. Unlike these towns the Forum of Mactaris did not house a Capitolium, a temple dedicated to Jupiter, Juno and Minerva, the three deities who were worshipped on the Capitol Hill of Rome. Archaeologists believe that the Capitolium of Mactaris was located near the old Forum. 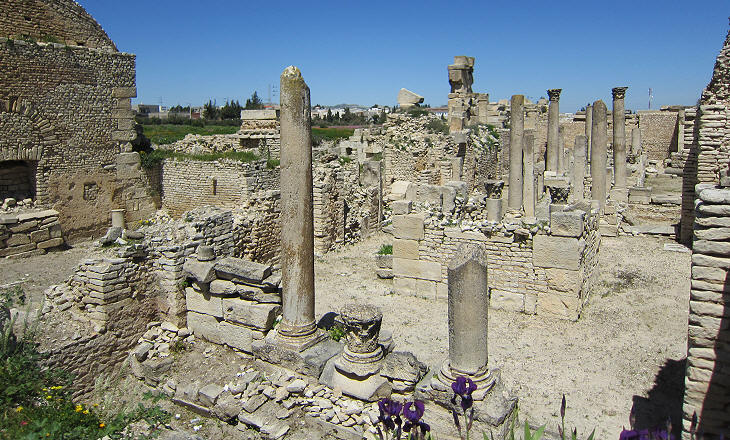 Western Baths built at the time of Emperor Marcus Aurelius

Emperor Marcus Aurelis granted Mactaris the status of "colonia" (Colonia Aelia Aurelia Mactaris), which meant that the town was regarded as an ally of Rome and it had a larger level of self-government. This decision was part of a policy pursued by the emperors of the IInd century and it was aimed at recognizing the contribution of the provinces to the well-being of the Empire. 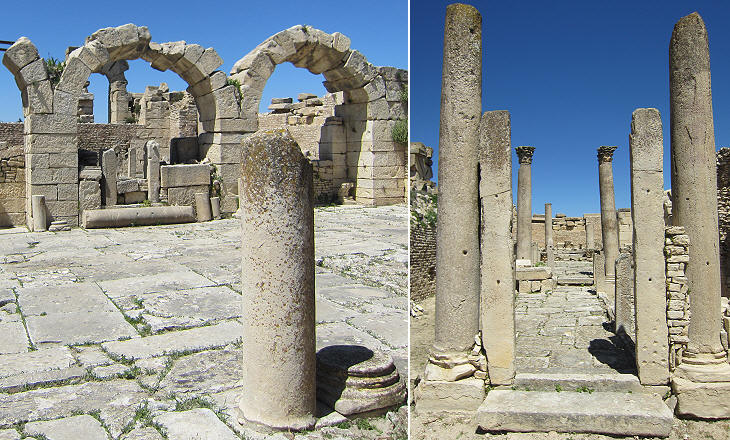 Mactaris had a reduced population until the XIth century, so its Roman monuments were modified to house other activities than those for which they were originally built. It is interesting to notice the loss of the old construction techniques. The main nave of the church built inside the Western Baths was very narrow and the roof was supported by an extremely high number of columns, as if the use of arches was unknown. 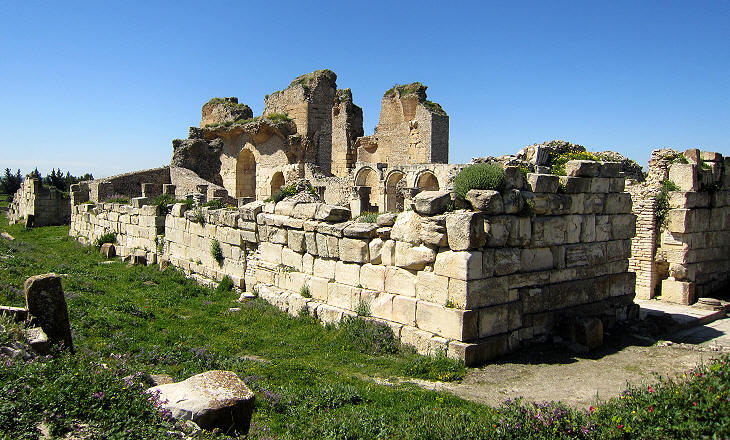 New larger baths were built during the reign of Emperor Septimius Severus at the end of the IInd century. They were turned into a small fortress in the VIth century and later on olive presses were installed in their halls. The baths had ancillary buildings which were pulled down to isolate the fortress. 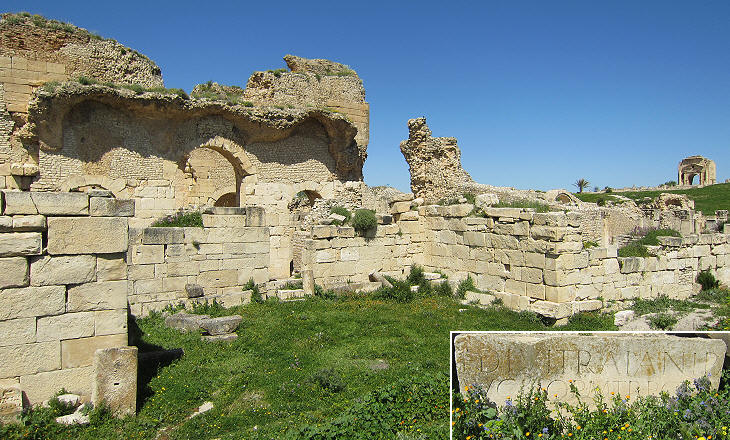 Entrance to the Southern Baths; (inset) fragment of a large inscription making reference to Emperor Septimius Severus (as a descendant of a long list of emperors including Trajan)

The new baths were built at a considerable distance from the Forum. Mactaris was a large town and its expansion was not hampered by natural obstacles. It has not been entirely investigated, and most likely it never will be, because a modern town (Makthar), founded at the end of the XIXth century, occupies parts of the old one. Makthar is situated along a minor road linking Kairouan with El-Kef (Sicca Veneria) and its archaeological area does not attract many visitors. 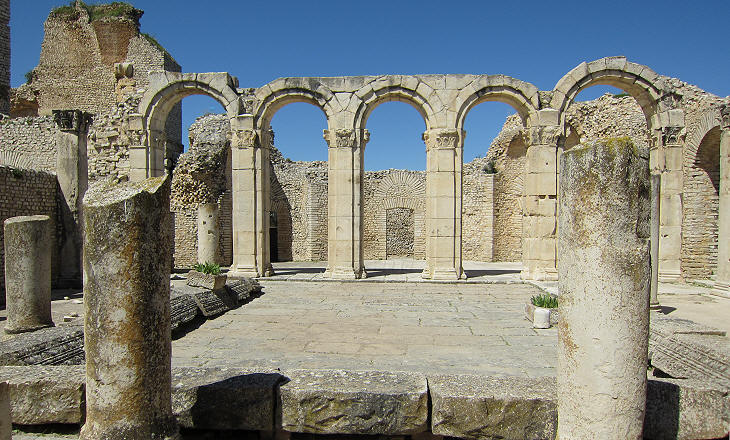 Archaeologists have reconstructed with materials found on the site some of the decorative elements of the baths which testify to the wealth of Mactaris, which had at least two other public baths. 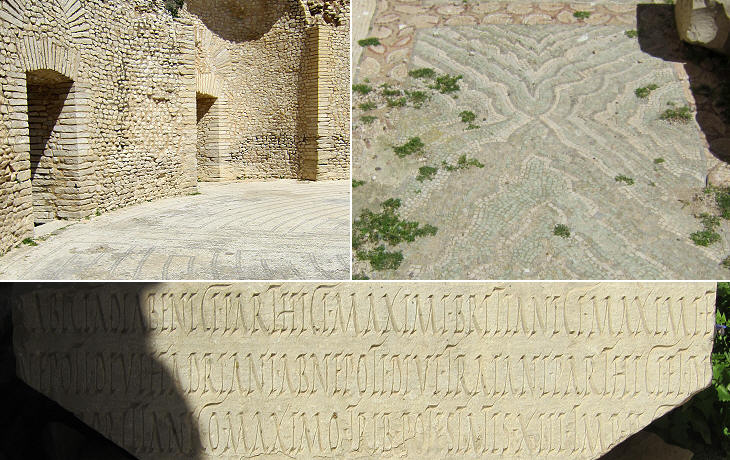 Southern Baths: (above) mosaics: (left) black and white depicting a Labyrinth pattern; (right) coloured using fragments of "cipollino" (green) and Simitthus (red) marbles; (below) inscription celebrating Emperor Septimius Severus for his many campaigns including that in Adiabene, a province of the Parthian Empire east of the River Tigris and south of Amida (today's Diyarbakir)

The image used as background for this page shows a relief portraying Pegasus, the mythical winged horse which was a symbol of Legio III Augusta, the Roman Legion stationed in the Province of Africa.