Sufetula (Sbeitla)
(detail of the theatre at Thugga)

We came to Spaitla, the ancient Sufetula. This city lies about twelve leagues to the south of Keff, and is one of the most remarkable places in Barbary for the extent and magnificence of its ruins.
Thomas Shaw - Travels or Observations relating to several parts of Barbary and the Levant - 1738. 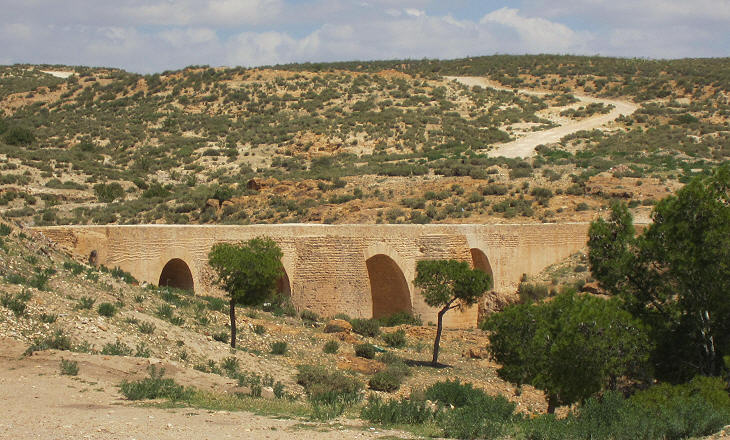 Spaitla is pleasantly situated upon a rising ground, shaded all over with juniper trees. A little brook glides along the N.E. side of it, which afterwards loses itself in the sand. Shaw
Sufetula is located in the interior of Central Tunisia, a region which was a great producer of olive oil at the time of the Roman Empire. Today it is a poor part of the country and by comparing the description of its landscape in 1738 with current images one feels that things have probably worsened since then. Some attempts have been made to restore olive oil production, but esparto, a grass employed for the manufacturing of cords and baskets, has been the main crop of the region for the last centuries. Today baskets, sunhats, embroidered shoes, etc, made out of woven esparto are sold in the bazaars of the holiday towns along the coast, but it is a small business. The paper made from esparto by a State company has excellent printing qualities, but the glossy magazines for which it was made have gone out of business. 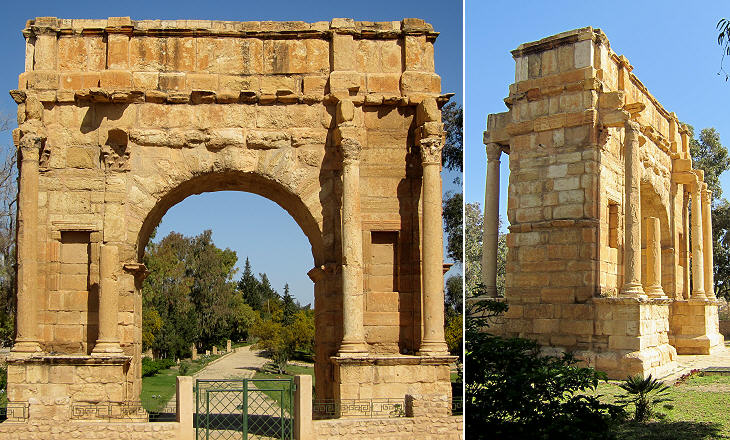 Triumphal arch celebrating Emperor Diocletian at the entrance to the town

It was built with perfectly cut stones which the centuries and the sun of Africa have given that reddish and golden tint which so much adds to the beauty of the ancient monuments.
Free translation from Victor Guérin - Voyage archéologique dans la Régence de Tunis - 1862 (with reference to the Arch at Pheradi Majus, but the comment applies to Diocletian's Arch too).
Sufetula was founded by veterans of Legio III Augusta, the Roman legion stationed in Africa, at the time of Emperor Vespasian. It has the typical design of Roman towns with a grid of perpendicular streets. It was situated along the Roman road which linked Carthage to Theveste, a town in today's Algeria where the legion was stationed. You may wish to see other triumphal arches in Africa: at Mactaris, Musti, Pheradi Majus and Thugga in Tunisia, at Cuicul and Thamugadi in Algeria, at Volubilis in Morocco and at Oea (Tripoli) and Leptis Magna in Libya. 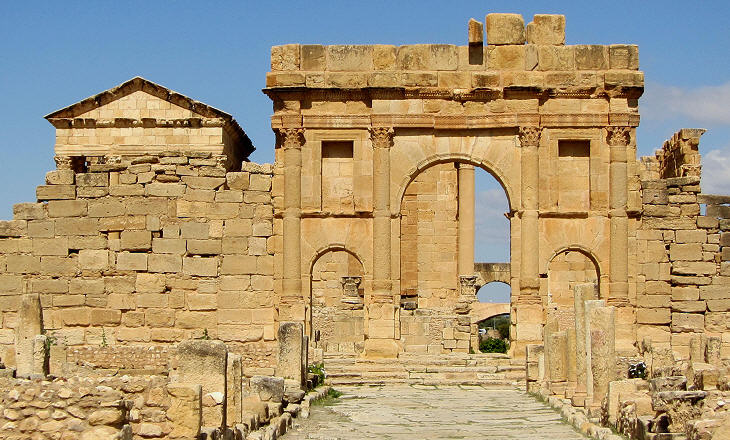 Arch of the Antonines

For there is first of all a sumptuous triumphal arch of the Corinthian order, consisting of one large arch, with a lesser one on each side of it, with these few words of the dedication remaining upon the architrave "Imp. Caesar Aug./Onin//Suffetulentium/Hanc edificaverunt/et DD.PP." Shaw
Today the arch is believed to have been built at the time of Emperor Antoninus Pius. It gave access to the Forum of Sufetula, which, similar to what occurred at many other locations (e.g. Thugga and Musti), was turned into a fortress by the Byzantines in the VIth century. You may wish to see the walls of the fortress in the introductory page and a large Byzantine fortress at Thignica. 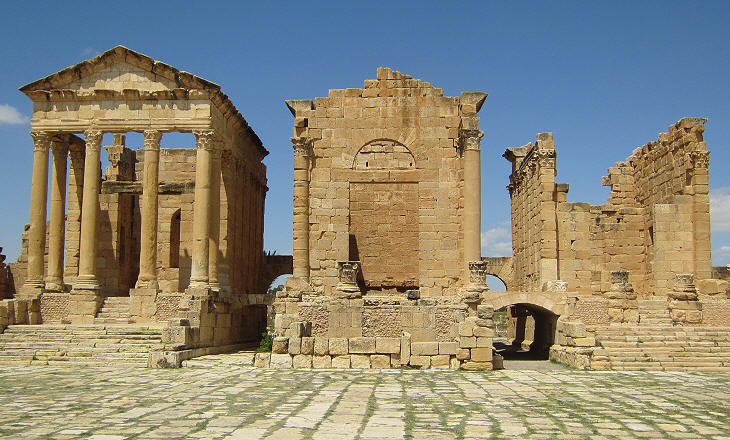 From this arch (..) we pass (..) to a spacious court. Here we have the ruins of three contiguous temples, whose several roofs, porticoes, and facades, indeed are broken down, but the rest of the fabric, with its respective columns, pediments and entablatures, remain perfect and entire. Shaw
The Capitolium was a temple dedicated to Jupiter, Juno and Minerva, the three deities which were worshipped on the Capitoline Hill of Rome.
The design of the Capitolium of Sufetula is almost unique because the statues of the three deities were placed in separate cellae and yet it would be erroneous to speak of three temples because bridges linked them and allowed access to the central cella which did not have steps. 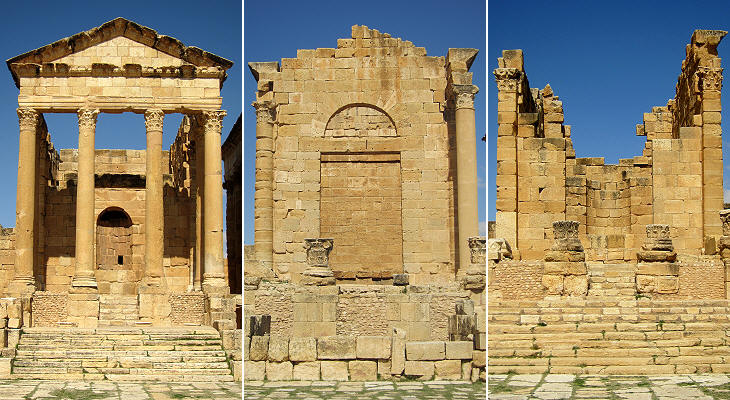 The Capitolium was built at the same time as the arch and as other similar temples at Thugga and Thuburbo Majus. These temples were mainly meant to celebrate the achievement of a higher status of the town in the Roman administrative system or the granting of Roman citizenship to its inhabitants.
During the IInd century AD the Roman Empire experienced a long period of peace and economic growth. One of the consequences was that Rome was no longer perceived as the centre of a foreign power, but as that of a community which the citizens of the provincial towns were proud to be part of. 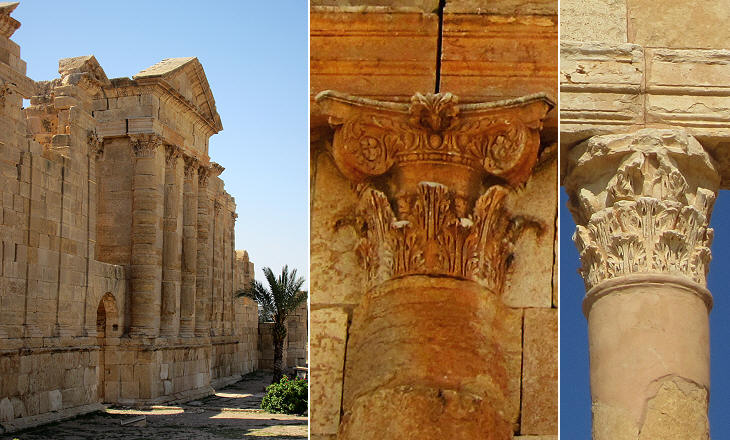 Capitolium: (left) rear side; (centre/right) capitals on the rear of Jupiter's cella and on the front of Juno's one

Sufetula was a town of some 5,000 inhabitants in the interior of the country and, even though the Romans founded towns in the oasis of Southern Tunisia, it was almost at the border of the Empire. Yet its temples were accurately decorated with mouldings and capitals, which indicates a wide circulation of treatises on architecture and engineering. Vitruvius, the Roman writer of De Architectura, a treatise on such matters, said that a building should have firmitas, utilitas, venustas i.e. that it should be solid, useful and beautiful and at the Capitolium of Sufetula his guidelines were fully complied with. 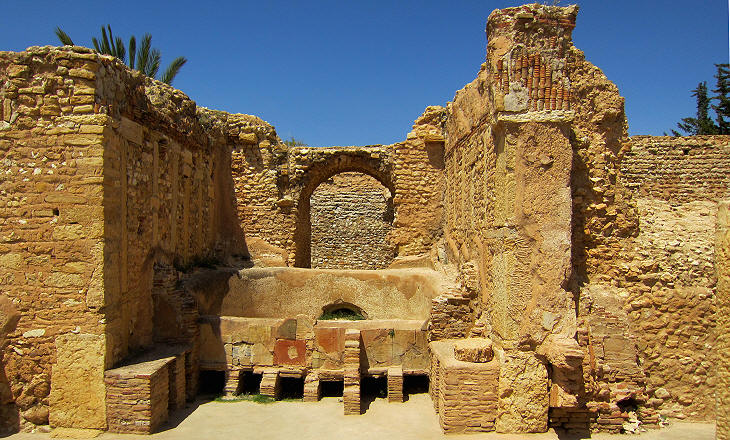 Hall of the Great Baths

The main baths of Sufetula were located a short distance from the Forum. Archaeologists have identified a twin set of halls which has led them to believe that a section of the baths was utilized in winter and the other one in summer. Inscriptions making reference to restorations indicate that the baths, which were built in the early IIIrd century, were in use during the Byzantine period, possibly until 647 when Sufetula was plundered by Arab raiders. 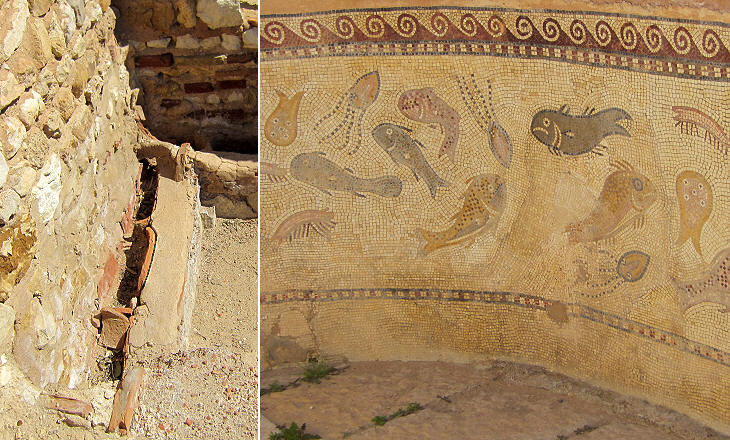 One of the small baths: (left) heating system; (right) detail of a mosaic (another detail can be seen in the image used as background for this page); see in the second page how the decoration of small basins of the baths led to that of baptismal fonts of early churches

Archaeologists have identified at least four other baths, one of which was part of a private house which has been in part destroyed by the construction of a modern road. Professional excavations at Sufetula started in 1906 and were abandoned a few years later. Unfortunately steps were not taken to forbid building in areas which were likely part of the ancient town. 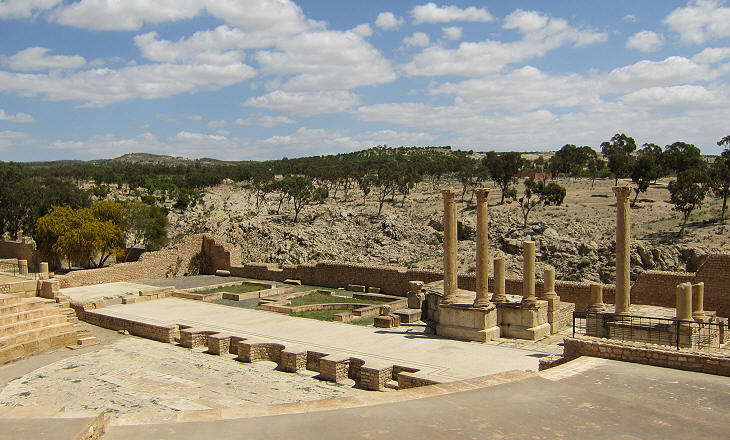 The theatre of Sufetula was built at the edge of a ravine created by the small river to the east of the town. What we see today is largely a modern reconstruction.
From Kerouan to Sbeitla. This is a journey in which some privation must be expected, but the traveller will be rewarded by seeing the most beautiful, the most extensive, and the best-preserved ruins in North Africa.
Murray's Handbook for travellers in Algeria and Tunisia - 1895
Sufetula is still a "must see" among the archaeological sites of Tunisia, but Sbeitla, the modern town, does not benefit much from its visitors, who rarely spend a night there, as they usually see it on their way from Kairouan (north-east of Sufetula) to the oasis of Southern Tunisia. 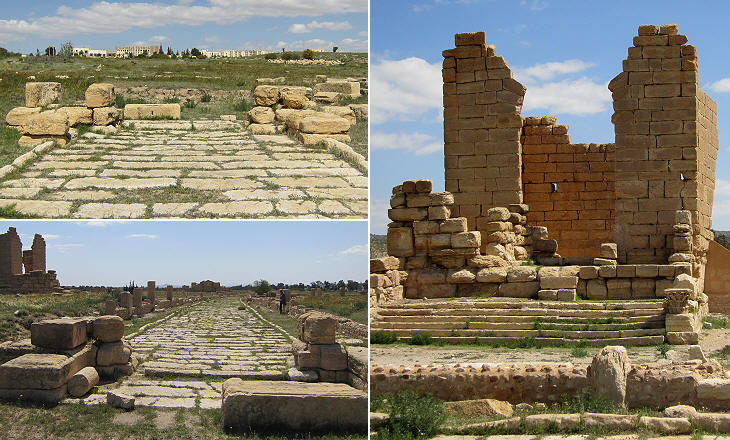 (left-above) Site of the arch dedicated to Emperor Septimius Severus and behind it that of the amphitheatre; (left-below) view from the arch showing the straight road leading to the Forum; (right) temple near the arch (unknown dedication)

The Amphitheatre is at the N. of the city. It was circular in form, but is now entirely destroyed. Many other important ruins exist, but they sink into insignificance when compared with the temples. Murray
The north-western part of Sufetula is still to be entirely excavated. An arch dedicated to Emperor Septimius Severus marked its northern entrance and beyond the arch the site of a small amphitheatre has been identified. 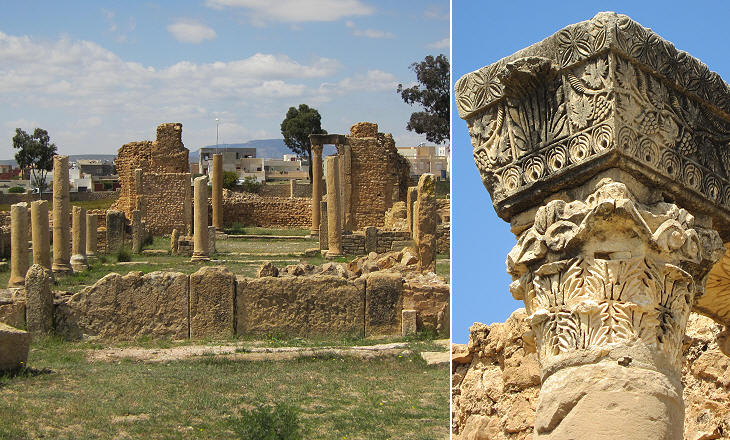 (left) House of the Four Seasons; (right) detail of its decoration; the lintel has typical Byzantine features (see some Byzantine capitals at Philippi in Macedonia)

Even as late as the Arab invasion Sufetula continued to be one of the most important cities in Byzacene ("Valeria Byzacena", a province created in Central Tunisia by the territorial reforms introduced by Emperor Diocletian in 285-292). Murray
A large Roman house indicates that the part of the town near the northern entrance was mainly a residential one. The house was enlarged by acquiring parts of other adjoining houses and it was used in Byzantine times. It is named after a mosaic portraying the Four Seasons which was moved to the Museum of Bardo in Tunis. 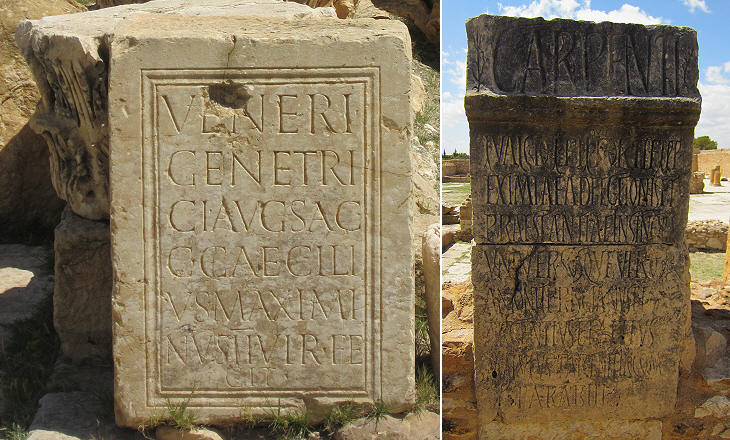 Inscriptions: (left - in the Forum) dedication to Venus Genetrix: Julius Caesar built a temple to Mother Venus in his forum in Rome. Venus was the mother of Aeneas, the Trojan hero who landed on the shores of Latium, a descendant of whom founded Rome; (right - in the Great Baths) dedication to L. Valgius by his parents. He was a "flamen", an officer appointed to superintend the ceremonies in honour of the emperors. The inscription is preceded by the heading "Carpenti" which could mean that he donated a "carpentum", a highly decorated carriage used in ceremonies