You may wish to see an introductory page to this section or the nearby Punic town of Kerkouane first. 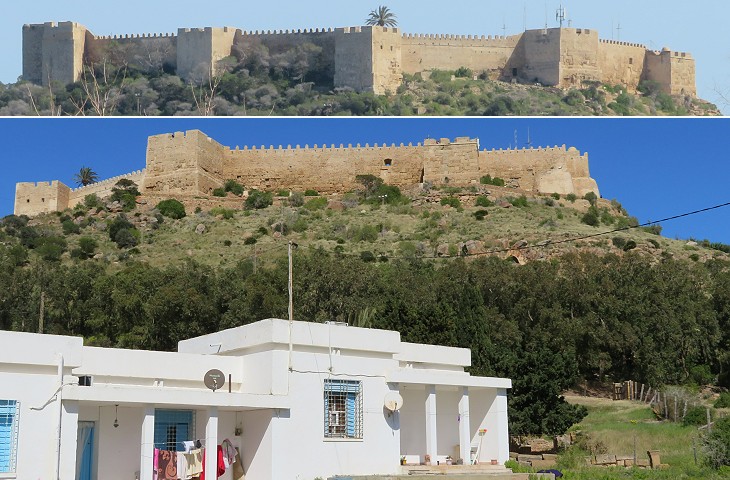 Five Leagues to the S. by E. of Cape Bon, is Clybea, The Clupea or Clypea of the Latins (..) This City was built upon the small Promontory which being in the Figure of a Shield or Hemisphere, gave Occasion to the Name. There is nothing standing of This antient City: for the Castle is a modern Structure; and what They now call Clybea, is a miserable Knot of Hovels, at a Miles Distance.
Thomas Shaw - Travels, or, observations relating to several parts of Barbary and the Levant - 1738
Clipeus was a Roman round shield, hence the name given to a medallion on sarcophagi or paintings.
We began the day by visiting the acropolis of the ancient town. It occupied a flat rock by the sea having a circuit of 1 km. It is high 150 m. It is currently crowned by a fortress which some say was built by the Spaniards and others by the Muslims. It is almost square with three towers on each side.
Free translation from Victor Guérin - Voyage archéologique dans la Régence de Tunis - 1862 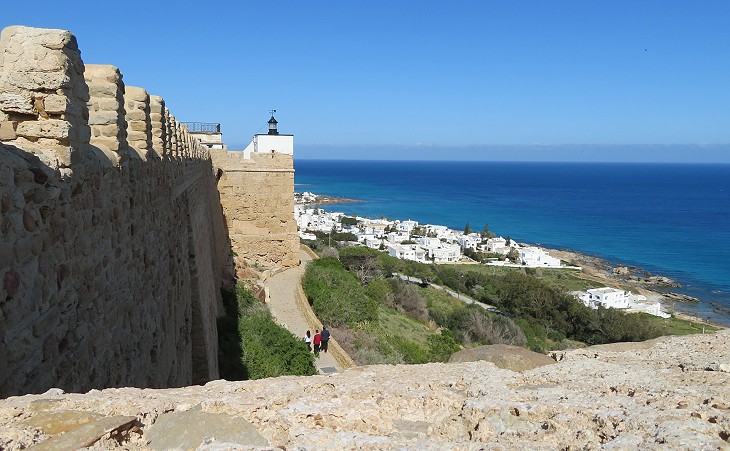 I was well informed, that, sometimes in fair Weather, They could discover the Mountains of Sicily from This Place. Shaw
From there we could see 80 km on the sea eastwards the isle of Pantelleria, which the Arabs still call Cossura, its ancient name. Guérin
The Gulf of Tunis is closed on the east by the peninsula of Cape Bon, the ancient Promontory of Mercury. It has the shape of a finger pointing towards Sicily which is distant 145 km / 90 mi. Kelibia is situated south-east of the cape. The Italian island of Pantelleria is midway between Cape Bon and Sicily. 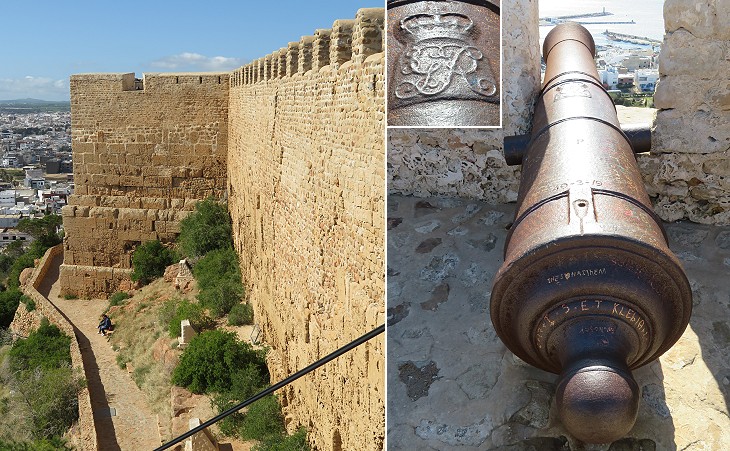 (left) A tower; (right) a gun of King George IV

Having been given permission we visited the fortress which has a small garrison of some twenty soldiers. Among the guns I noted a Spanish one. It would not be difficult to clean and maintain the fortress, but the Muslim neglect is well known; it does not destroy much, but it lets everything to rot without attempting to repair it. Because of this attitude parts of the fortress, which enjoys a strategic position, are falling apart. Two towers have almost lost their upper parts. Guérin
During the XVIth century there was a long conflict between Emperor Charles V and Ottoman Sultan Suleyman I for the control of Tunisia. In 1535 the Spaniards conquered Tunis and in the following years they built or strengthened a number of coastal fortresses including La Goulette and Bizerte. In 1574 the Ottomans managed to expel the Spaniards from Tunisia and they rebuilt/repaired some of the fortresses. 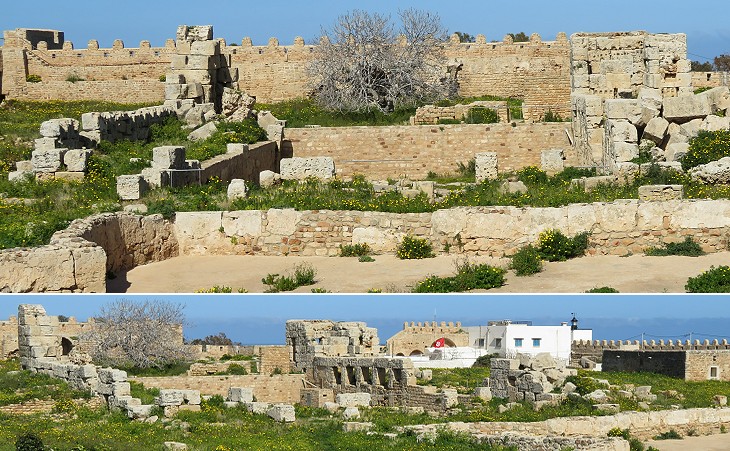 The interior of the fortress is full of debris. At its centre among trees, bushes and cactuses there are the remains of an ancient castle having a rectangular layout with a tower at each corner. The walls have largely fallen, but one of the towers is still in good condition and gives a good idea of those which do not exist any longer. (..) Clypea was the seat of a diocese and the last town abandoned by the Byzantines when the Arabs conquered the province. Guérin
The Byzantines conquered Tunisia in 533, nearly a century after the country had been invaded by the Vandals. They had the control of the sea thanks to a technically advanced large fleet, but their army was pretty small and the size of the many fortresses they built using stones from ancient monuments testifies to it. At Thignica there is a better preserved example of a similar Byzantine fortress. 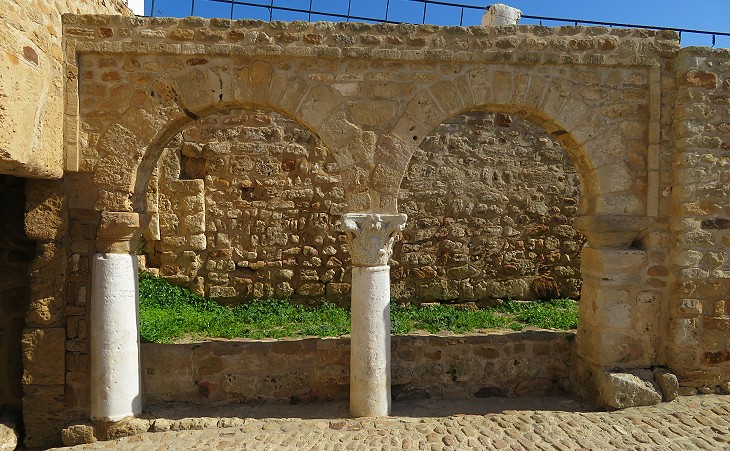 Ancient columns inside the fortress

Pliny the Elder lists Clypea as a free town, which indicates it was an active port at the time of Emperor Vespasian. The Peninsula of Cape Bon, apart from the cape itself and a range of hills in its central part is a plain which was intensively farmed and Clypea was the harbour from which grain and other crops were shipped to Rome. 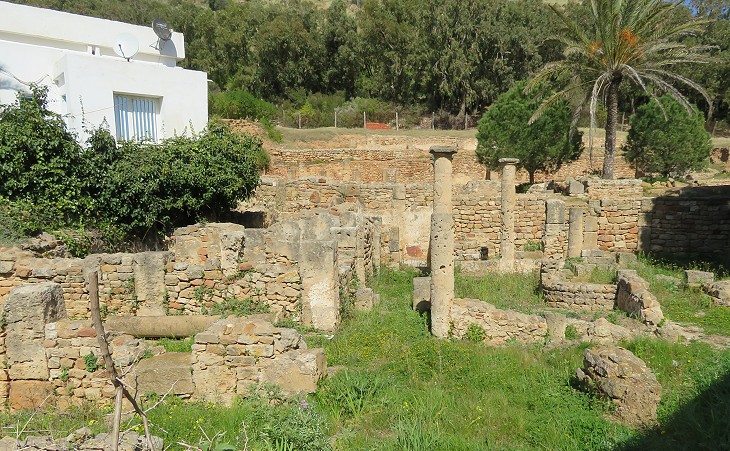 We then walked on the site of the ancient town, almost entirely razed to the ground, at the foot of the hill along the sea. Fragments of the town walls can be identified; they had several gates of which one was still standing until seven years ago when it was demolished to utilize elsewhere its well cut stones. Of the town itself there are only uninteresting remains, which continue to disappear every year. Guérin
The Arab town where Guérin stayed was in an inland location a mile distant from the ancient one. Archaeological excavations were carried out chiefly in the 1960s; they identified a number of Roman monuments, including a house with a small peristyle. 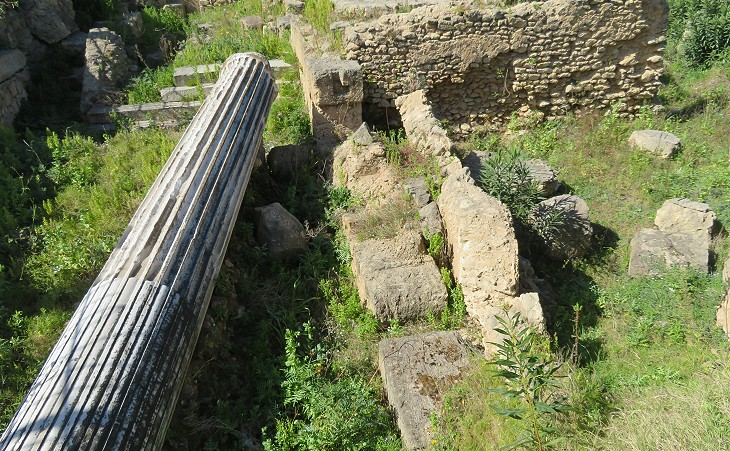 Modern Kelibia was developed in the 1960s on the site of the ancient one and it was provided with a harbour. Because of its strategical position it houses one of the four bases from which the Tunisian Coast Guard operate. The offices and barracks of the Coast Guard are a military objective and thus access to and taking photographs of the remains of Roman Clypea in their premises is forbidden. The fine column most likely belonged to the Capitolium, a temple dedicated to Jupiter, Juno and Minerva, the three deities who were worshipped on the Capitoline Hill; it was a symbol of Rome, rather than a religious place of worship. You may wish to see the Capitolia of Thuburbo Majus, Thugga and Sufetula. 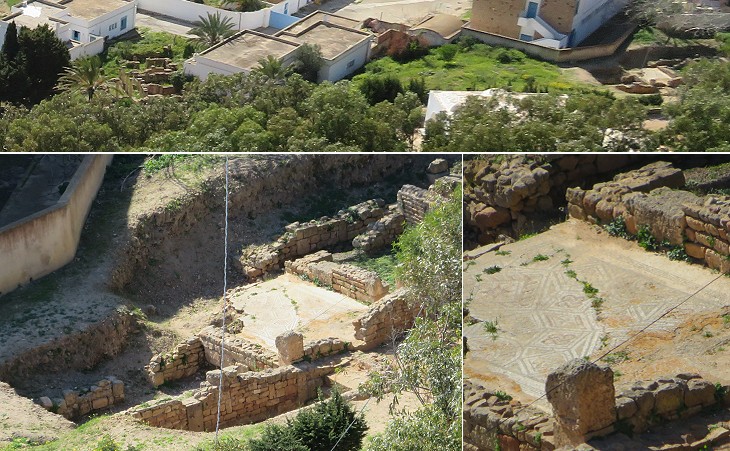 Views from the fortress: (above) House of the Small Peristyle (left) and Villa of Marcus Aurelius (right); (below) details of the villa

The view from the fortress offers an opportunity to find a way around the Coast Guard prohibitions. The villa was excavated in the 1990s and is so named because of a bust of young Emperor Marcus Aurelius which was found there. It was built on a series of terraces on the western side of the hill. While the House of the Small Peristyle is the result of a series of modifications of an original building of the Ist century BC, the Villa of Marcus Aurelius was built in its entirety towards the end of the IInd century AD. 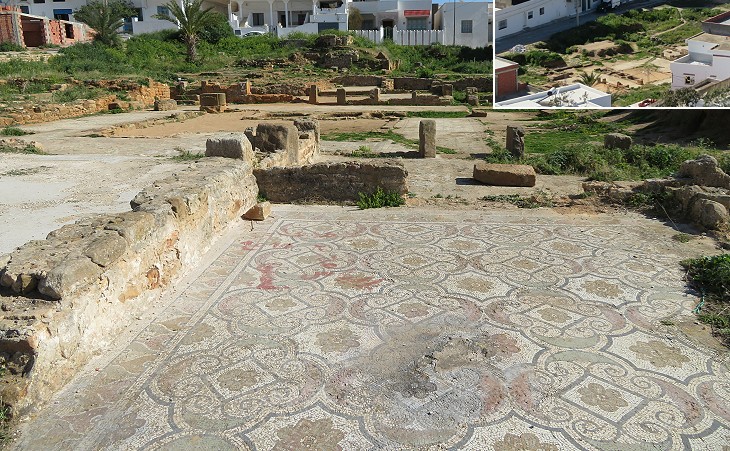 Roman house west of the harbour: (inset) seen from the fortress

Another memory of the Roman town was excavated in an area which is now surrounded by modern buildings. There are many floor mosaics which deserve some more protection. Considering that the site is not fenced it was reassuring to see that there were no clear indications of vandalism; this applies also to other archaeological sites of Tunisia which are left unprotected, e.g. Thignica and Musti. 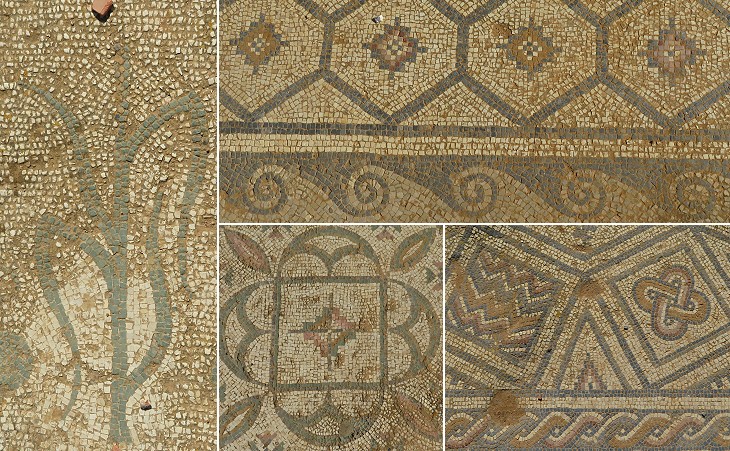 Roman house west of the harbour: details of its floor mosaics; that on the left shows a decorative pattern which can be seen also in a mosaic at the Museum of Sousse; another detail is shown in the image used as background for this page

The mosaics found at Kelibia which contained figures were moved to the Museum of Nabeul, the provincial capital or to the Museum of Bardo, but Tunisia being so rich in floor mosaics, those based on geometric patterns were left on the site. 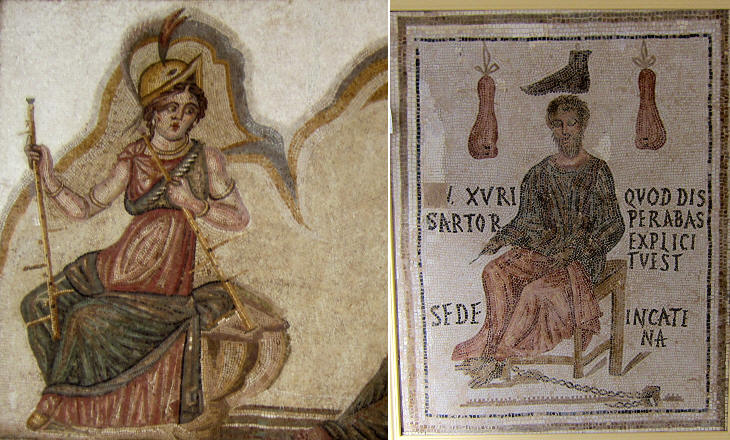 Museum of Nabeul: floor mosaics from Kelibia: (left) Athena tossing away the flutes she had just invented. She did so after she realized (by seeing her image in a river) that playing them disfigured her face; (right) Mosaic of the Shoemaker (IVth century AD)

The mosaic of Athena shows an in-depth knowledge of Greek myths because the event it depicts precedes a better known one, i.e. the contest between Apollo and Marsyas, the satyr who picked up the flutes tossed away by Athena.
The Mosaic of the Shoemaker puzzled archaeologists because of the contrast between the inscription and the image. Sartor is a Late Latin word for tailor, but the shop shown in the mosaic is that of a sutor, a shoemaker. The mosaic could depict a saying similar to Don't judge the book by its cover (the inscription says tailor, but the man is a shoemaker).
The portrayal of the shoemaker however does not tally with the traditional iconography of this artisan, who was highly estimated in Roman society (you may wish to see the solemn funerary monument of Julius Helius, a Roman shoemaker). Based on the pale and miserable aspect of the man, Henri Lavagne, an expert in ancient mosaics, suggested in 2003 that the inscription and the image might refer to an anecdote about a ghost which was reported by Pliny the Younger (Letters - Book 7:27 - translation by J.B. Firth).

In this context the words quod disperabas explicitum est would mean that the desperation of the ghost ceased when its body was found and buried. The overall purpose of the mosaic was an apotropaic one, i.e. to avert bad luck and envy. 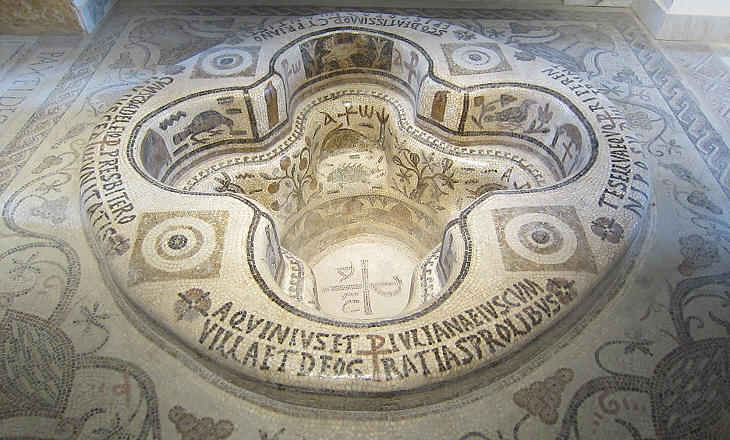 Museum of Bardo: VIth century baptismal font found at Kelibia with the names of the donors

In the 1950s a very finely decorated Byzantine baptismal font, a real masterpiece, was found at the side of a Christian basilica. It is interesting to compare it with those at Sufetula and Thapsus. At Sufetula the baptismal font was placed under a canopy, whereas at Kelibia, the location of the canopy columns was just depicted in the mosaic. At Sufetula it had traditional steps for the immersion, whereas at Kelibia and Thapsus these were incorporated into the smoothly curved shape of the basin. The design and decoration of the baptismal fonts descend from those of small pools of Roman baths which had a mosaic decoration also on the walls, e.g. those at Uthina and Sidi Ghrib. 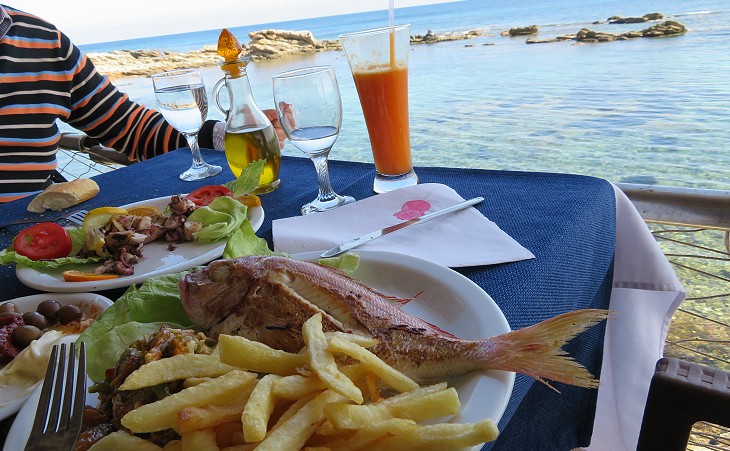 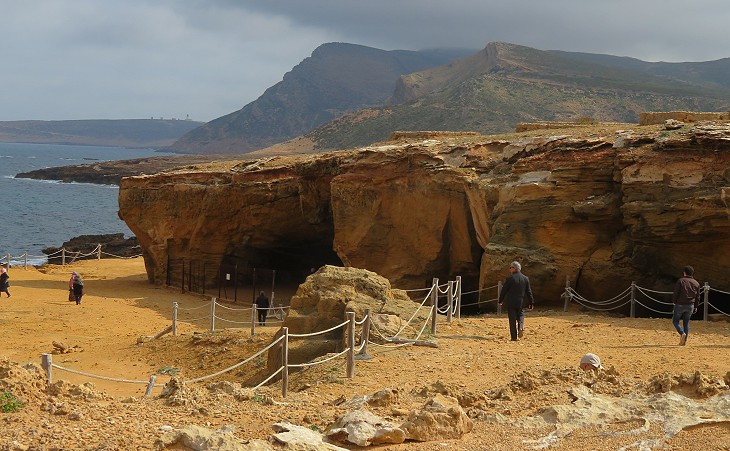 The Mountain, from the level of the Sea to the Height of twenty or thirty Foot, is all the way very artfully scouped and hollowed; small Openings being carried up, in several Places, to the Surface, for the Admission of fresh Air; whilst large Pillars and Arches are left standing, at proper Distances below, to support the Mountain. These are the Quarries which Strabo takes Notice of; from whence the Buildings of Carthage, Utica, and the many other adjacent Cities, might receive Their Materials. Moreover, as the Mountain above is all over shaded with Trees; as the Arches below lye open to the Sea, having a large Cliff on each Side, with the Island Aegimurus placed over against Them; as there are likewise some Fountains perpetually draining from the Rocks, and Seats for the weary Labourer; we have little Room to doubt, from such a Concurrence of Circumstances, so exactly corresponding to the Cave which Virgil placeth somewhere in This Gulph. Shaw 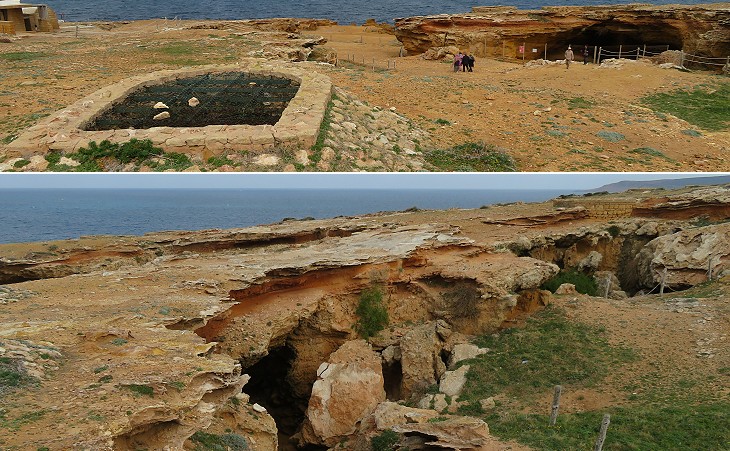 (above) One of the openings (now closed) which gave access to the quarries; (below) sites where the surface rock collapsed showing the quarry beneath it

The first record about these quarries is dated 309 BC when Agathocles, tyrant of Syracuse invaded the region. Guérin
The quarries might have been exploited by the Carthaginians, but they were mainly used by the Romans when they rebuilt Carthage in the Ist century BC. In many ways they resemble the Latomies of Syracuse which were at the same time a prison and a quarry.
Today they can be accessed through breaks in the rock, but in origin the only entrance was from the top.