- page two
(The Library of Hadrian)

Emperor Hadrian's Addition seen from the Acropolis: in the foreground Hadrian's gate; behind it the Olympieion; in the upper left corner the reconstructed stadium

Hadrian added a new quarter to the city of Athens; it was located to the east of the old city and it is easily identifiable from the Acropolis. 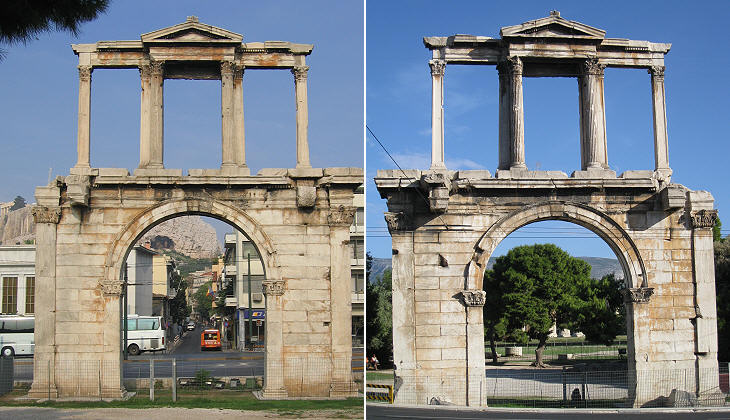 A triumphal gate was built in 131 AD at the end of a street (now called Odos Adrianou) that led from the old city of Athens to Hadrian's addition. Two inscriptions are carved on the architrave, one on each side: the first, on the side towards the Acropolis reads "This is Athens, the ancient city of Theseus"; the second, on the other side, facing the addition reads "This is the city of Hadrian and not of Theseus".
The design of the gate is an attempt to combine a Roman arch (lower part) with a Greek temple (upper part); most likely it was endorsed by the emperor himself, as Hadrian thought of himself as a talented architect. 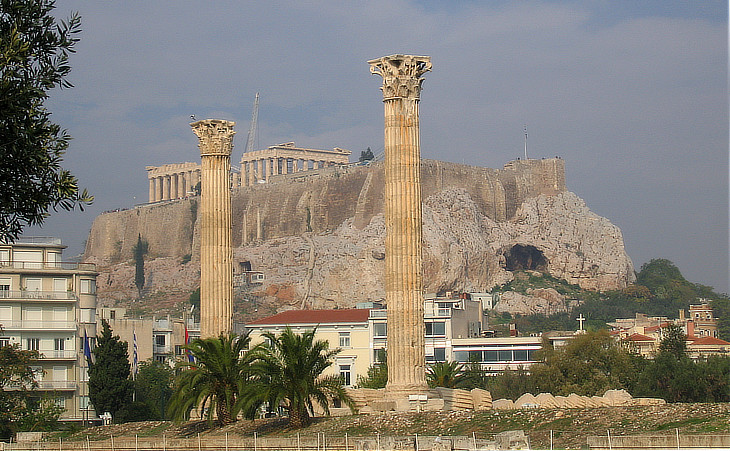 The Olympieion is a large temple dedicated to Zeus Olympios. It was built by Hadrian between 124 and 132 AD. According to tradition, the establishment of a sanctuary on this site goes back to the early historic times of Athens. In ca. 515 BC, Peisistratos the Younger, began the construction of a monumental temple which was not finished because of the fall of his dynasty in Athens. Much later, in 174 BC, Antiochos IV Epiphanes, King of Syria, attempted to continue the erection of the temple, which was eventually completed by Hadrian. Inside the temple stood a colossal chryselephantine (gold and ivory) statue of Zeus. It was surrounded by 84 Corinthian columns in total. 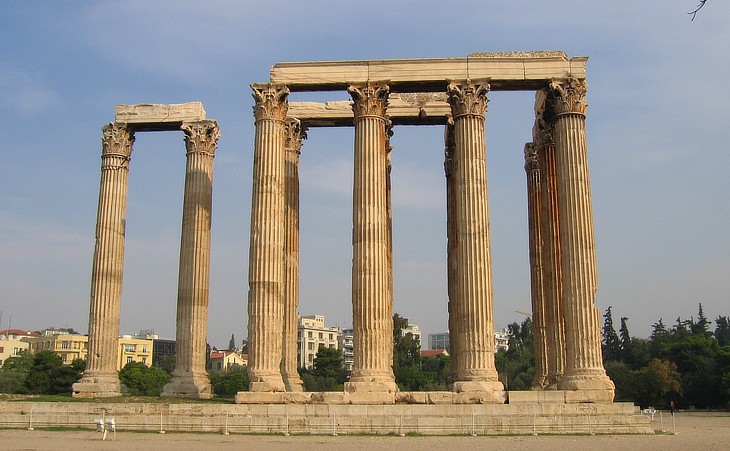 Olympeion: the main group of columns and detail of a column 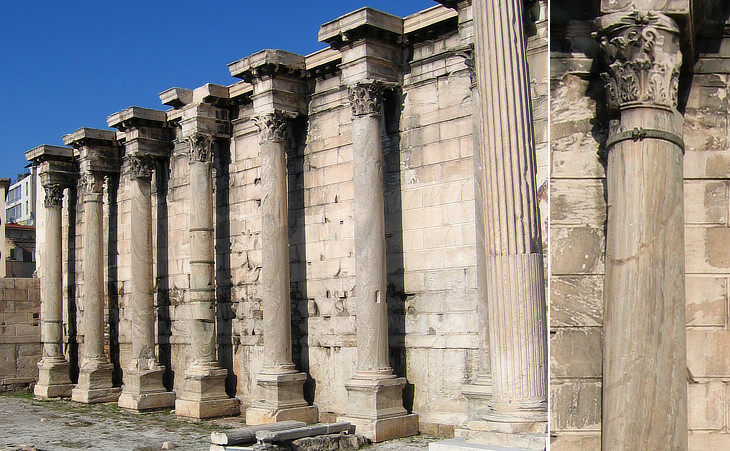 Hadrian's Library and a detail of one of the "cipollino" columns

The Library built by Hadrian near the Roman Agora in 132 AD was comprised of a Corinthian propylon on the west side, an open peristyle courtyard, a library, a study and lecture halls. It was destroyed by the Heruli in 267, and was subsequently incorporated into the Late Roman fortification wall. In the Vth century a church was built in the centre of the courtyard. During the Ottoman occupation it became the seat of the Voevode (Governor) and in 1835 it was incorporated into the barracks built by King Otho. 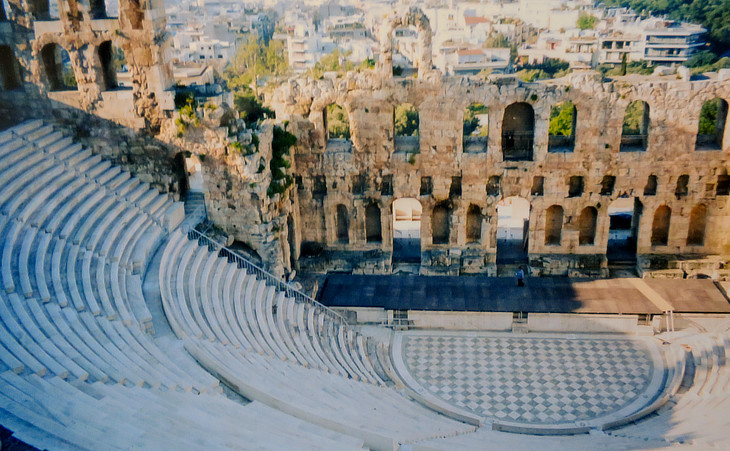 It was erected by Herodes Atticus in memory of his Roman wife Annia Regillia, who died in 160 AD (see her tomb in Rome). Tiberius Claudius Atticus Herodes was a most celebrated rhetor. He was born into an immensely wealthy Athenian family that had received Roman citizenship by Emperor Claudius. He was befriended by Hadrian. The odeon is shaped as a semicircular theatre and could seat around 5,000 people. The Odeon was destroyed during the invasion of the Heruli in 267. Its ruins were later on incorporated in the medieval walls protecting the southern flank of the Acropolis. 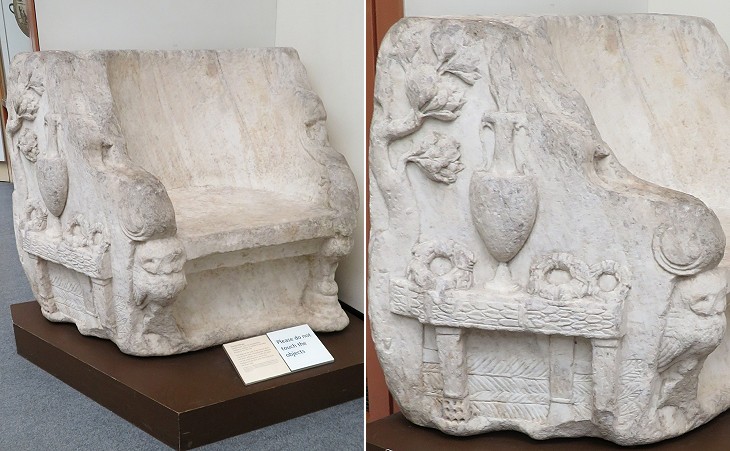 British Museum: marble throne from the Stadium of Athens which Herodes Atticus rebuilt in 139-143 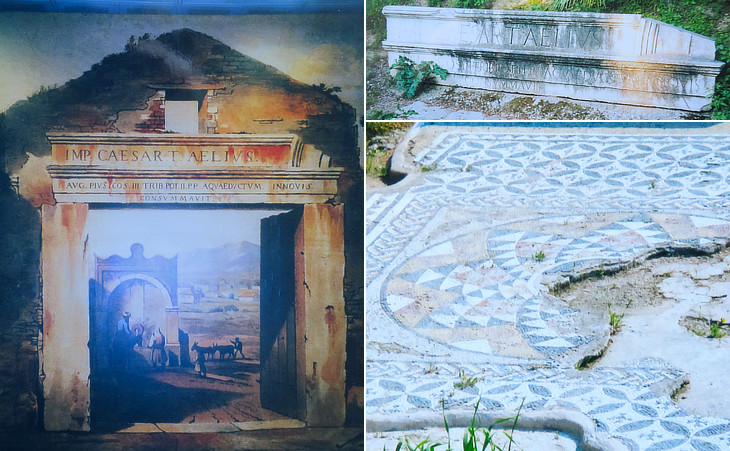 For the 2004 Olympic Games, Athens greatly increased its underground transportation network. In the large hall of the new Syntagma Square station an entire wall is covered with an XVIIIth century view of the gate which once stood on that site. It was a gate built by the Ottomans using as an architrave a large stone with a Roman inscription celebrating the completion of an aqueduct. The gate was pulled down in the early XIXth century when the area became the centre of modern Athens: the stone with the Roman inscription can still be found (with some difficulty) in the National Gardens next to the former Royal Palace. It is the only evidence left of the aqueduct built by the Romans to provide Athens with the large supply of water required by the baths which they had built near the Olympieion.
Traces of Roman villas and of their mosaics can be found in the archaeological area to the west of the Acropolis (Odos Apostolou Pavlou). 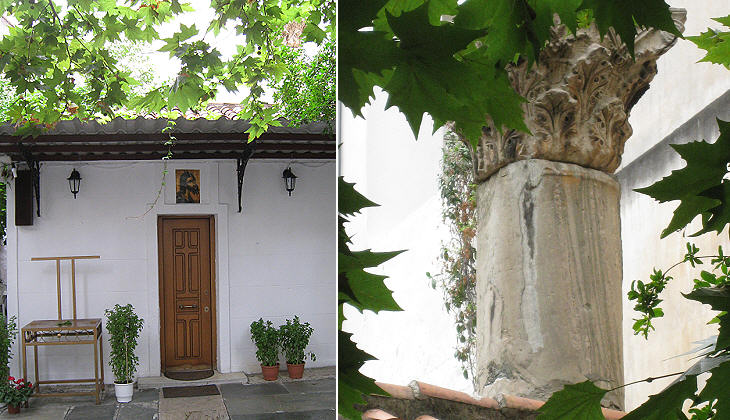 Athens was imbued with classical culture and Emperors Theodosius and Justinian took steps to close the schools of Athens in order to deprive the city of its role in the education of the upper classes. Over time Athens lost population and importance; in the administrative division of the Byzantine Empire it was part of the Hellas theme (province) which had Thebes as the capital.
The transition to the new situation can be symbolized by Agios Gianis stin Kolon: this tiny church was literally built around an ancient cipollino column which was thought to have healing properties; only the access to its lower part was sheltered by the building and the capital of the column comes out from the roof. 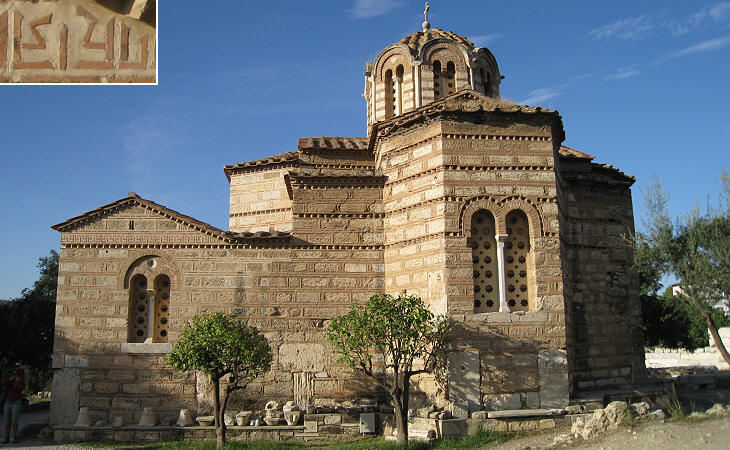 Agii Apostoli: in the inset a pseudo-Kufic inscription

Agii Apostoli is a much restored Xth century Byzantine church which was turned into an Ottoman mosque; it is located in what used to be the market of the ancient city. While it is true that the Parthenon was turned into a church and that therefore Athens had a large religious building, the size of the churches built during the Byzantine period is an indication of the limited population of the city. 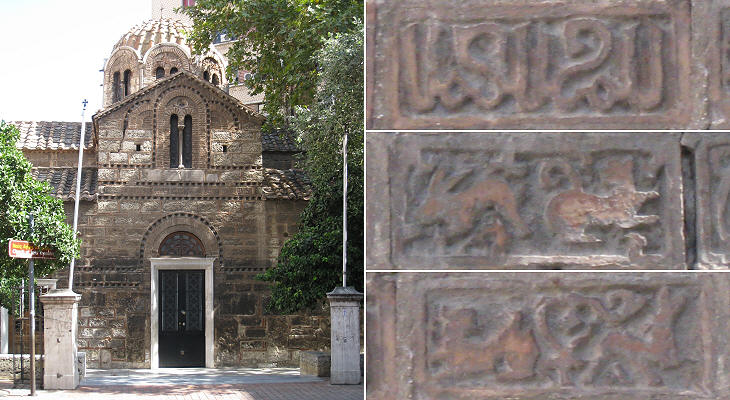 (left) Agii Theodoroi; (right) details of its decoration including a pseudo-Kufic inscription

Agii Theodoroi was originally built in the XIth century, but it was renovated in the following century; the presence of bricks decorated with Kufic inscriptions does not mean that these were added during the Ottoman period; the Byzantines in the Xth century re-conquered some territories where the Arabs had built mosques which were decorated with Kufic inscriptions; they found them to be very elegant and made use of them in churches for a merely ornamental purpose. Plaka is the neighbourhood at the foot of the northern slopes of the Acropolis where several small Byzantine churches can be found. During the Ottoman rule it had a mixed Muslim/Christian population (there are also some mosques). Plaka means old in the Greek/Albanian dialect which was spoken in Athens before it became the capital of the Kingdom of Greece. 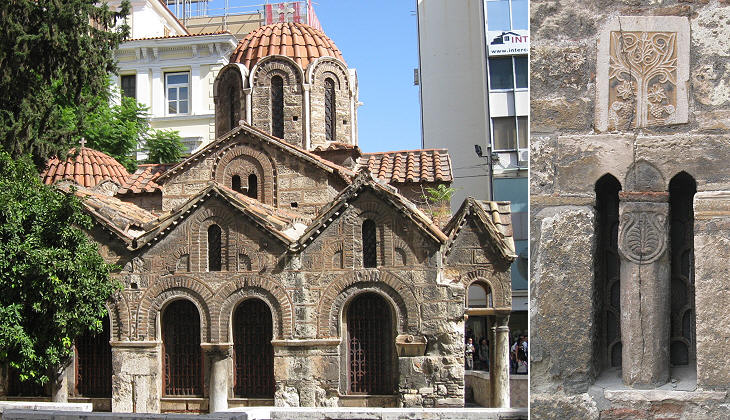 In 1204 the Byzantine Empire was partitioned among the participants to the Fourth Crusade; for Athens this meant the beginning of a rather chaotic period: the city belonged to the Burgundian De la Roche family until 1308, to Walter de Brienne until 1311, to Catalan mercenaries until 1388 and to the Florentine Acciaiuoli family until 1456 when it became part of the Ottoman Empire.
Kapnikarea is composed of two churches; the larger one with the dome was built after the end of the Byzantine rule. 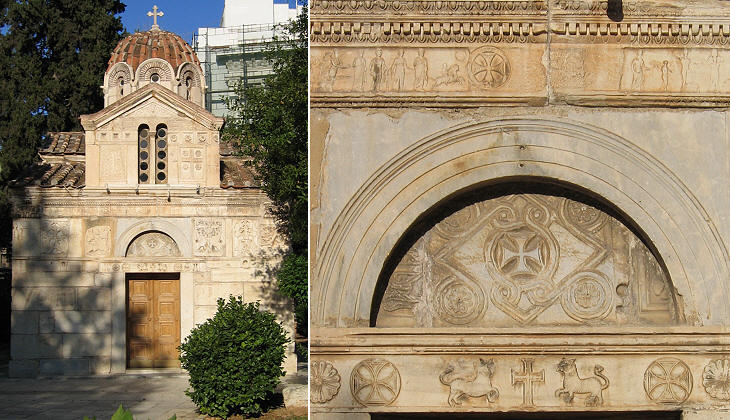 The cathedral of Athens is another church which was built during the Byzantine rule and was modified after its end. Its lavish decoration is all based on reliefs taken from ancient buildings or earlier churches. Of particular interest is a IInd century AD frieze representing the months of the Attic calendar. 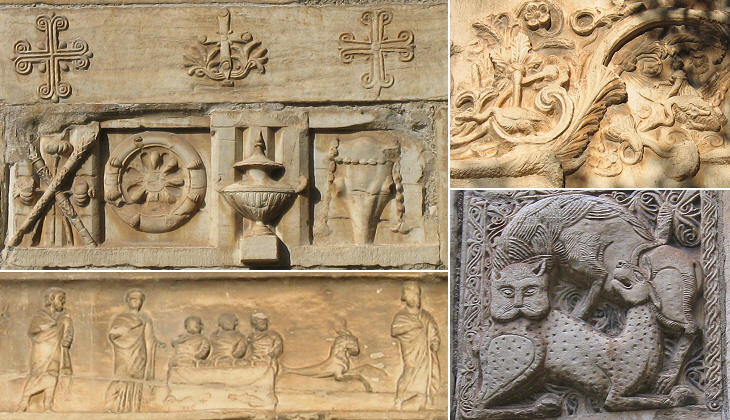 Mikri Mitropoli: ancient and medieval reliefs (in the lower left corner a detail of the calendar frieze)


Return to page one or learn how the Venetians briefly conquered Athens in 1687.