- Introduction
(inscription on a gate opposite Topkapi Sarayi)

Byzantium, Augusta Antonina, Nova Roma, Constantinople and eventually Istanbul have been the names of this city which has a history as long and glorious as that of Rome.
Its traditional foundation (as Byzantium) is set in 667 BC almost at the same time as that of Rome (753 BC) and its name derived from Byzas, its first king (as Rome was named after Romulus). Istanbul is also similar to Rome in being built on seven hills.
This section is aimed at illustrating in a concise manner the main monuments of the city; they are grouped according to the historical period they belong to. A page with a map shows their location. Separate sections deal with the ancient walls of the city and with Galata, a colony founded by the Genoese opposite Constantinople and now part of Istanbul. 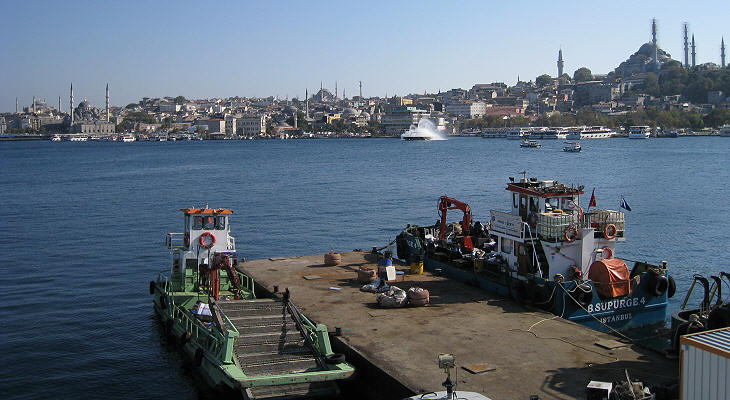 As there have been particular descriptions given of Constantinople, it is unneccessary to say much of it. The beauties and advantages of its situation have been much enlarged on, and no account can possibly give a just idea of it, as it surpasses every thing that can be said, insomuch that the fine views which it affords are alone a sufficient recompence to the traveller who goes to see it. (..) The ground rising from the port and from the sea round the end of the promontory, makes the situation very beautiful, and it is not difficult to discern the seven hills on which the city is built.
Richard Pococke - A Description of the East and Some Other Countries - 1745
The peninsula upon which the historical city is situated has the shape of a horn, but the Golden Horn is a narrow inlet of the sea between the peninsula and the European side of the Bosporus, the strait linking the Black Sea with the Marmara Sea (and the Mediterranean Sea). The Golden Horn was an excellent natural harbour where the small ships of antiquity could put into to wait for the appropriate weather conditions to sail through the Bosporus. The Golden Horn was the harbour of the city until the XIXth century. 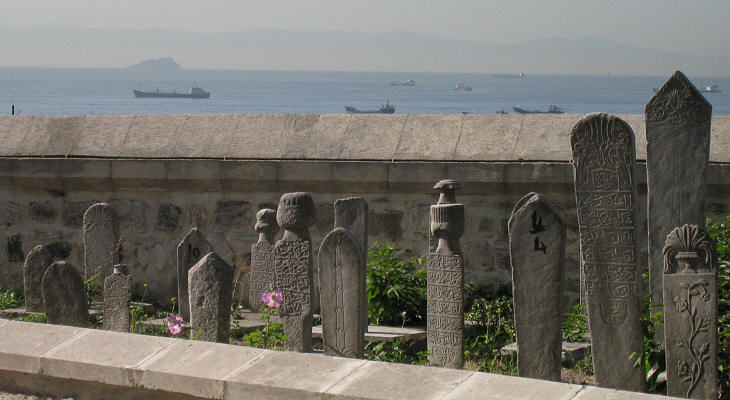 The Sea of Marmara seen from the graveyard of Cerrah Pacha Camii on the Seventh Hill: in the background one of the Princes' Islands and the Asian coast

Five hills are over the port, divided by valleys that descend from the height, which joins some of the hills, and goes near the whole length of the city, the Adrianople street running all along on the top of it; on the second hill is the burnt pillar; on the third hill is the magnificent mosque Solimanea; the valley between it and the fourth hill is broad; the aqueduct of Valentinian crossed it, of which there remain about forty arches. (..) the mosque of sultan Mahomet is on the fourth hill, and that of Sultan Selim on the fifth, the western walls of the city running along on the top of the sixth hill. These hills rise so one above another from the port, that they all appear from the mouth of the harbour, and most of the houses having a court or garden, in which they plant trees for the shade and the refreshing verdure, this adds a great beauty to the prospect: The seventh hill, is divided by a vale from the height that joins the three last hills, which are to the north of it; this hill alone is computed to be one third part of the city, and is to the south of the fourth, fifth, and sixth hills. Pococke
July 28, 1794. The whole point between the Sea of Marmora and the canal is covered with Constantinople. It, like all Turkish towns, owes infinite beauty to the number of trees scattered through it, besides orchards and gardens. Their burying-grounds are the prettiest things in the world: they are large spaces not spoiled by glaring mausoleums and monuments, but shadowed with large and gloomy groves of the most beautiful cypress.
The letters of John B.S. Morritt of Rokeby descriptive of journeys in Europe and Asia Minor in the years 1794-1796.
The side of the peninsula on the Marmara Sea was of lesser importance than that on the Golden Horn and even today it retains a relaxed atmosphere and it is less impacted by the urban developments which have turned Istanbul into one of the largest metropolises of the world. 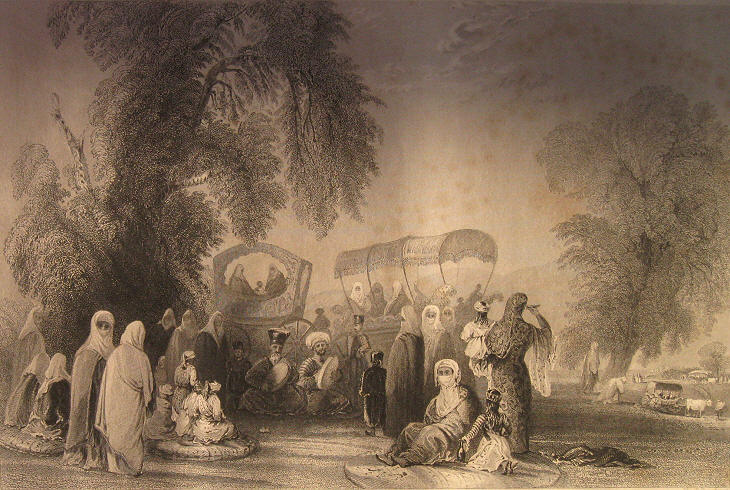 I happened to see Constantinople at a time when the Turks were in good humour, and had no reason to be displeased with the Franks (except that the soldiery would gladly have continued the war against the emperor) they had just made a very honourable peace for themselves with that monarch, and not a very disadvantageous one with the Muscovites whom they dreaded as a power superior to them; so that I went freely all over Constantinople, and was so far from being affronted in the least, that I rather met with civility in every place; entered publickly into such of the mosques as I desired to see, and sometimes even on Fridays, just before the sermon began. (..) And indeed to speak justly of the Turks, they are a very tractable people when they are well used, and when they have no prospect of getting any thing by ill treatment. Pococke
The expansion of modern Istanbul has mainly taken place on the European side of the Bosporus and to a lesser extent on the Asian one. The shores of the strait have lost most of the woods and meadows where in the olden days the inhabitants of Istanbul went picnicking. 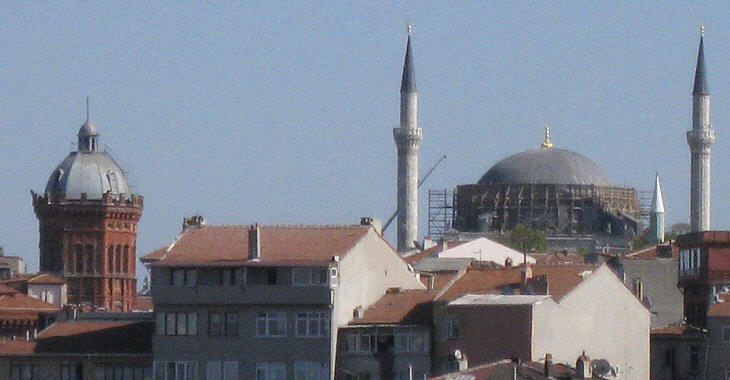 The Eastern Roman Empire originated in 395 AD from the division of the empire between Arcadius and Honorius, sons of Emperor Theodosius I. Historians refer to it as the Byzantine Empire; the reference to the ancient name of the city, stresses the prevalence of the Greek element.
A Greek community survived the Fall of Constantinople in 1453 and it provided the Ottoman Empire with civil servants and merchants. Istanbul maintained throughout most of the XIXth century a dual identity; the capital of the Ottoman Empire and the city with the largest number of Greek inhabitants. 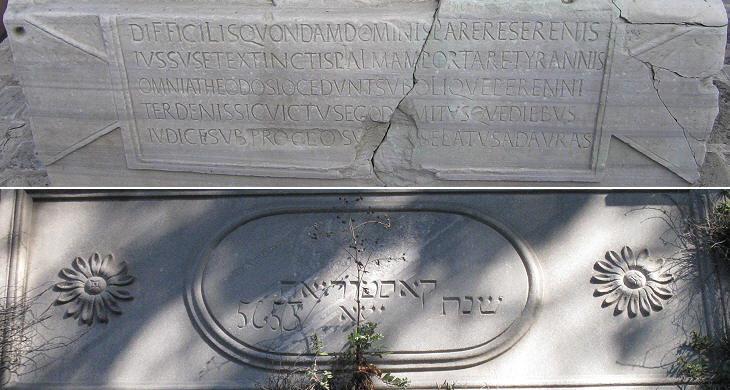 (above) Latin inscription celebrating the erection of the Obelisk of Thutmose III by Emperor Theodosius; (below) inscription in the former Jewish quarter of Balat, not far from Fethiye Camii

The Armenians exist no longer collectively as a nation, once famous for the wealth and luxury of its monarchs; but successively conquered and alternately subject to the Turks and Persians, they have preserved only their native language (even which is disused at Constantinople) and the remembrance of their ancient kingdom. Dispersed over all Asia, they exert their natural genius for trade, principally in speculations as money changers; and individuals, who gain immense property, prefer living peaceably in Constantinople to returning into their own country. (..) The Constantinopolitan Jews attain to a degree of respectability, because they enjoy equal privileges with the other subjects of the Ottoman empire. They are allowed the free exercise of their religious rites, and are indulged in their own jurisprudence, excepting when they appeal by choice to the Cady. When Ferdinand and Isabella, by a false policy or a blind zeal, expelled them from Spain, the greater part sought an asylum in the Ottoman territory, and many still retain the names, and use the corrupt colloquial Spanish, mixed with Turkish or Venetian.
James Dallaway - Constantinople Ancient and Modern with Excursions to the Shores of the Islands of the Archipelago and to the Troas - 1797
In addition to the monuments of the Byzantine and Ottoman empires, Istanbul retains memories of its ancient Roman past and of the other communities, such as the Jewish and the Armenian ones, who flourished there for many centuries and were allowed to live inside the city walls. 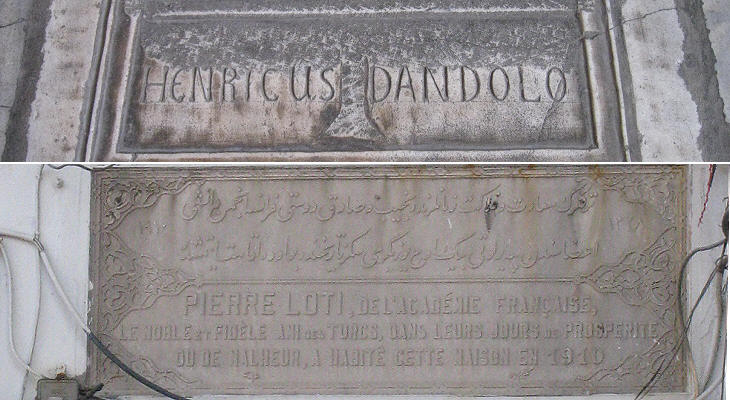 Nicoetas Choniates, the continuator of the Byzantine history to the taking of Constantinople, by Baldwyn Earl of Flanders in 1203, in relating the destruction done to the remains of Grecian art by the French and Venetians, gives a curious catalogue of those existing in his days, in inflated language, and very questionable veracity. The four brazen horses, said to be the work of Lycippus, were removed from the arch of Nero at Rome, by Constantine, to the hippodrome, and transported from thence to Venice, where they now stand in the great duomo of St. Mark. Columns of porphery, and mosaics, the work of the lower ages, were likewise brought from thence to enrich the Venetian churches. Dallaway
Between the XIIth and the XVth century Venetians and Genoese competed for controlling or at least having a say in Constantinople affairs; the former led the Crusaders to the conquest of the city, the latter established a colony at Galata on the northern side of the Golden Horn. 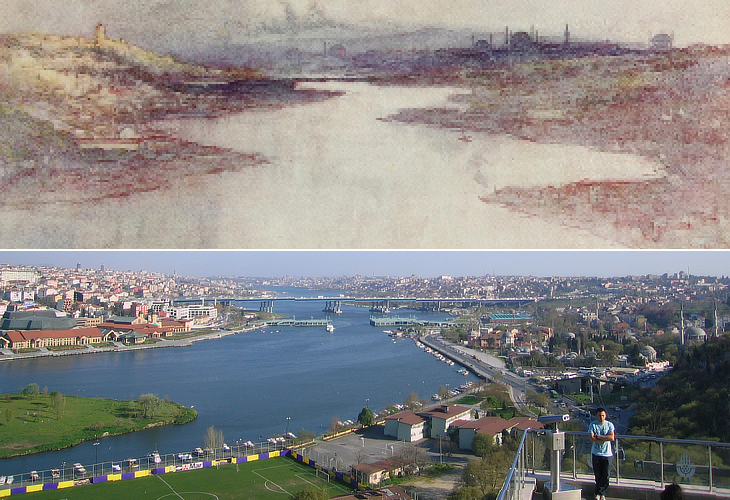 The Golden Horn from the Pierre Loti Cafè at Eyup

Beside the coffee-houses, near the Osmanie, are teriaki-hana, where (afioni) opium is sold; and taken in gradation from ten to a hundred grains in a day. Intoxication with this noxious drug is certainly less prevalent than we have been informed; and he who is entirely addicted to it, is considered with as much pity or disgust as an inveterate sot is with us. The preparation of opium is made with several rich syrups, and inspissated juices, to render it palatable and less intoxicating, and resembles elder rob. It is either taken with a spoon, or hardened into small lozenges, stamped with the words "Mash allah," literally "the work of God." Dallaway
In the XVIIIth and XIXth centuries many travellers came from Europe to visit the great mosques and/or to have a taste of the debauched atmosphere of a great capital at its twilight. 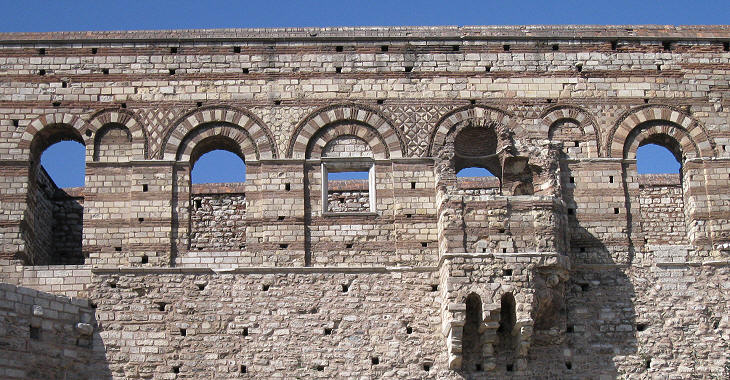 A characteristic of many monuments of Istanbul and which runs across its whole history is the use of alternate layers of red bricks and white stones; it derives from opus listatum, a Roman construction technique. 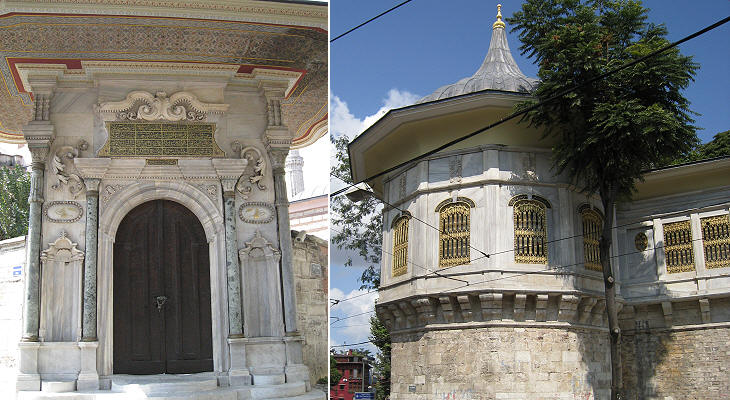 (left) Gate opposite Topkapi Sarayi (it led to Hagia Sophia) with the icon of this section; (right) Alay Kosku

The power of the Ottoman Empire reached its peak in the XVIth century and the great mosques of Istanbul were built during that century or immediately after. The last period of the Ottoman Empire was marked by smaller buildings which were designed according to an Oriental version of the Baroque and Rococo styles. 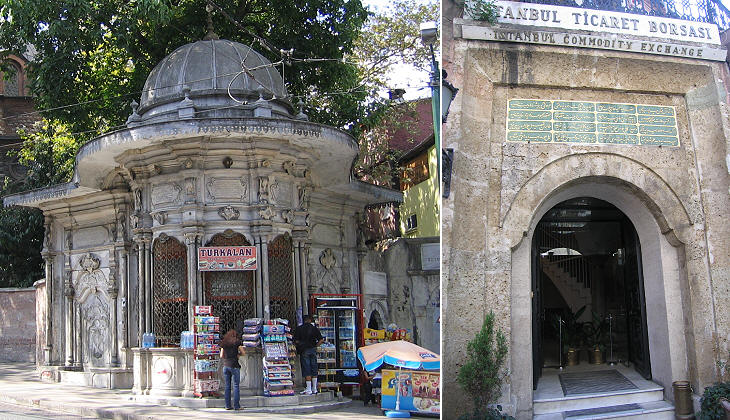 (left) Abdul Hamit I Sebil (kiosk fountain) in Alemdar Caddesi; (right) the Istanbul Commodity Exchange which is housed in an old building

In 1923 the city lost its role as capital, which was assigned to Ankara and in 1930 its official name became Istanbul. The Republic of Turkey under the leadership of Mustafa Kemal Ataturk introduced radical reforms aimed at emphasizing the secular aspect of the state. Many minor historical buildings which were part of religious facilities were utilized for new purposes. 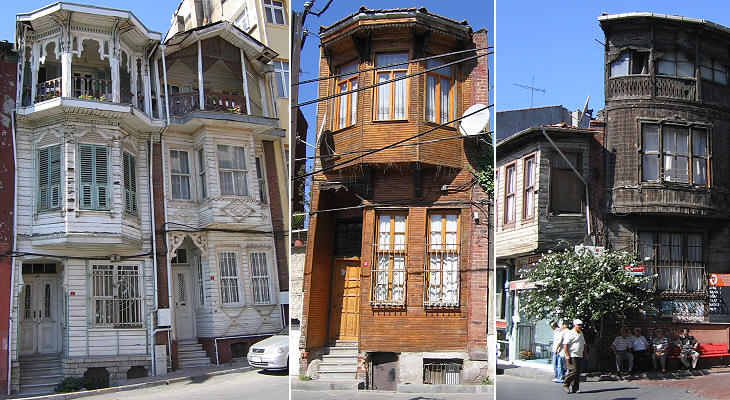 Great part of the houses of Constantinople are built with wooden frames, mostly filled up with unburnt brick, and a great number of houses are made only of such frames covered with boards: They have notwithstanding very good rooms in them; and the streets are tolerable, with a raised footway on each side. Pococke
Timber houses were a characteristic of Istanbul; today they can still be seen in some neighbourhoods near the city walls. 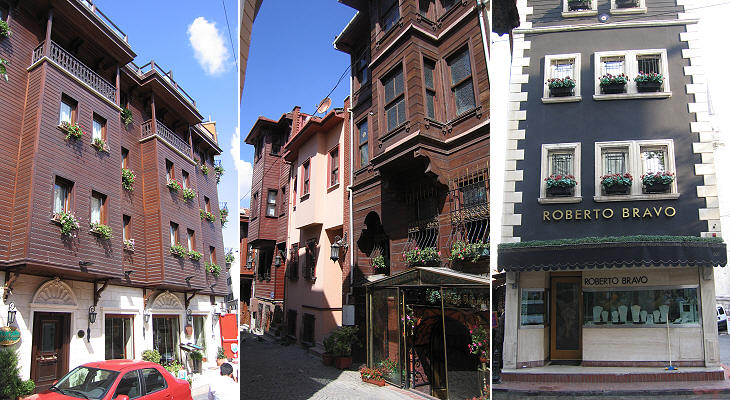 The tourist district is situated between Hagia Sophia and Kapali Carsi (Great Bazaar) and it is called after Sultan Ahmet I, who commissioned the Blue Mosque; it is mainly made up of modern buildings, some of which are evocative of the old ones. 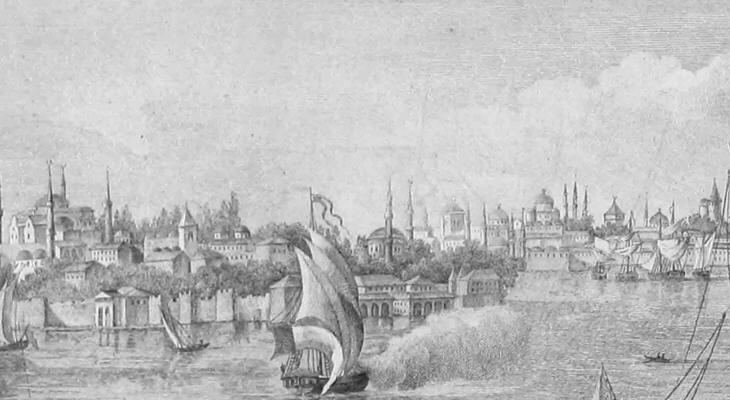 In this section modern views of Istanbul are accompanied by engravings by William Henry Bartlett, a British artist who is best known for his works on the American and Canadian scenery, but who also travelled extensively through the Ottoman Empire and by Russian engravings based on paintings by Gavriil Sergeef.

The image used as background for this page shows the dome of Hagia Sophia.