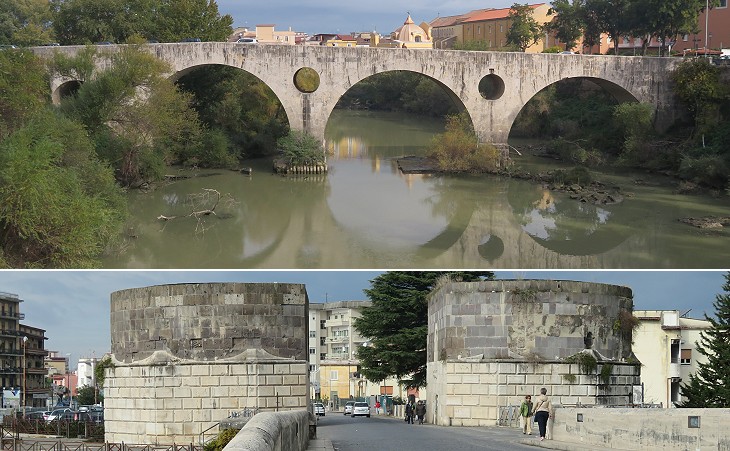 (above) Former Roman bridge; (below) pillars of the Arch/Gate of Emperor Frederick II at its western end

We now approach the site of the ancient Casilinum which is occupied by the modern city of Capua; it was divided by the river Vulturnus which at the same time separated the Falernian territory from Campania. (..) The ancient city of Capua is placed by writers of antiquity at the distance of three miles from Casilinum where the Appian and Latin ways met.
Sir Richard Colt Hoare - A Classical Tour through Italy and Sicily - Journey from Rome to Beneventum on the Appian Way in 1789 - 1819.
The Arch of Frederick II was dismantled in 1557 to provide Capua with more effective fortifications. The bridge was redesigned in 1756 and it was almost entirely destroyed by Allied bombings in 1943. 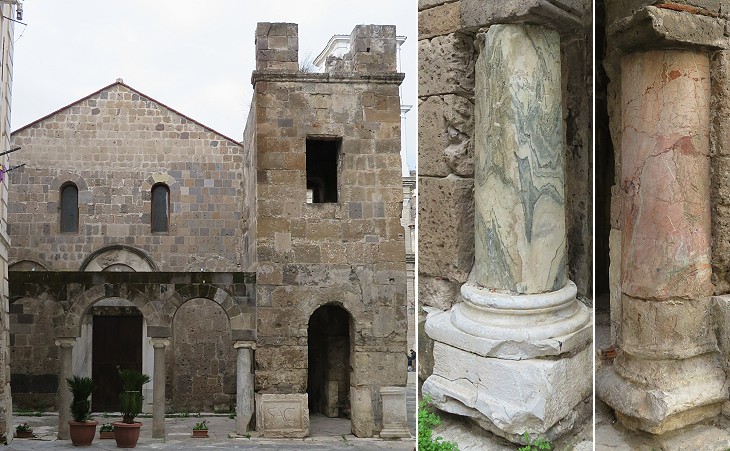 (left) S. Angelo in Audoaldis; (centre) fragment of a "cipollino" column; (right) fragment of a column similar to those in the cathedral of ancient Capua

In 856 Landulph formed here an independent earldom dismembered from the duchy of Benevento, and in the course of a few generations Capua acquired the title of a principality. (..) The streets are more open and airy than is usual in the towns of this kingdom, and the buildings better. Many of them are constructed with materials brought from the ancient city.
Henry Swinburne - Travels in the Two Sicilies. 1777-1780
The Longobards or Lombards ruled over most of Italy for two centuries and in the district of Capua for nearly five centuries. They have not left many memories of them, apart from some jewels. S. Sofia in Benevento, Tempietto Longobardo in Cividale and S. Salvatore in Brescia are among the very few buildings which testify to their long tenure of the country. 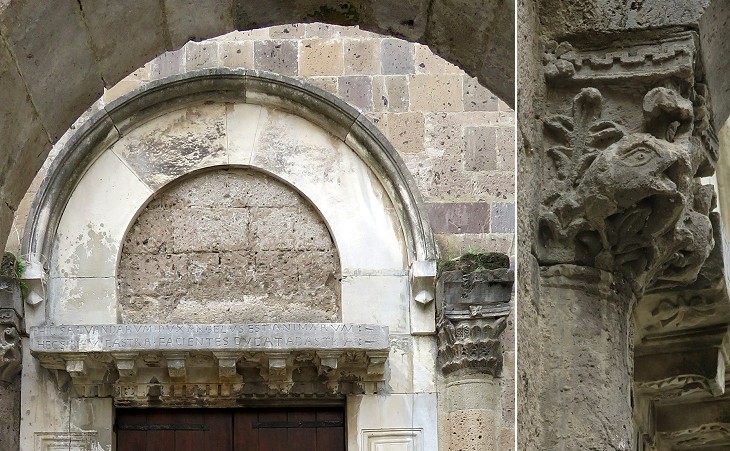 S. Angelo in Audoaldis: (left) portal of the church; its ancient lintel bears the inscription "HIC SALVANDARVM DUX ANGELVS EST ANIMARVM / HEC SIBI QVI CASTRA FACIENTES DVCAT AD ASTRA" a dedication to Michael the Archangel, written in a broken Latin which can be translated as "Here is the Archangel, leader of souls to be saved; may he lead to the stars those who built this fortress for him"; (right) a medieval capital

The church was built in the IXth century by the Audoalt, a noble Longobard family, in the proximity of the residence of the Counts and later on Princes of Capua. The town was a very small one, almost a castle. In addition to the threats posed by rival Longobard towns, the rulers of Capua had to face that of the Saracens who established a permanent settlement on the site of ancient Minturnae. The Saracens were forced to abandon it in 915 as a result of a sort of crusade promoted by Pope John X. 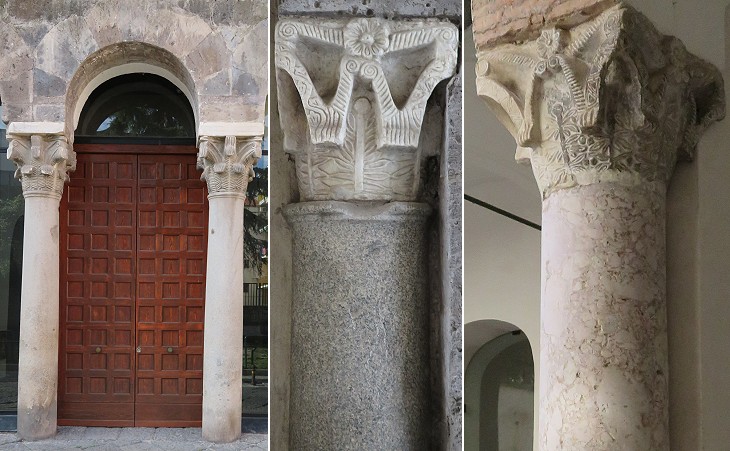 S. Salvatore a Corte was founded in 960 near the residence of the Princes. While at S. Angelo in Audoaldis the decoration had been almost entirely based on the somewhat haphazard use of ancient materials, in this church the capitals had an original design which can be seen in some other Longobard monuments of Capua. They vaguely resemble those of the Corinthian order. The image used as background for this page shows a Longobard relief in the Museum of Campania inside Palazzo Antignano. 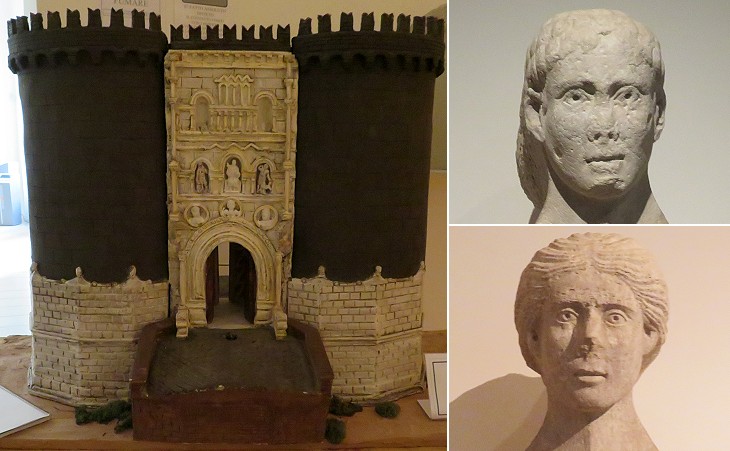 Museum of Campania: (left) model of the Arch of Frederick II; (right) two busts which decorated its lower part

In the eleventh century the Normans of Aversa. expelled the Lombard race of princes, and Richard their chief became prince of Capua; the Hauteville (another Norman family) drove out the descendants of Richard, and united this state to the rest of their possessions. Swinburne
The Normans enlarged the town and strengthened its defence by building new walls and Castello delle Pietre, a large tower on its eastern side. The importance of Capua as a military stronghold which protected Naples from attacks from the north grew during the long rule of Frederick II, Holy Roman Emperor in 1220-1250. In 1234 he decided to build a sort of Roman arch at the entrance to Capua. It was completed in 1239; in the same year the Emperor was excommunicated by Pope Gregory IX. 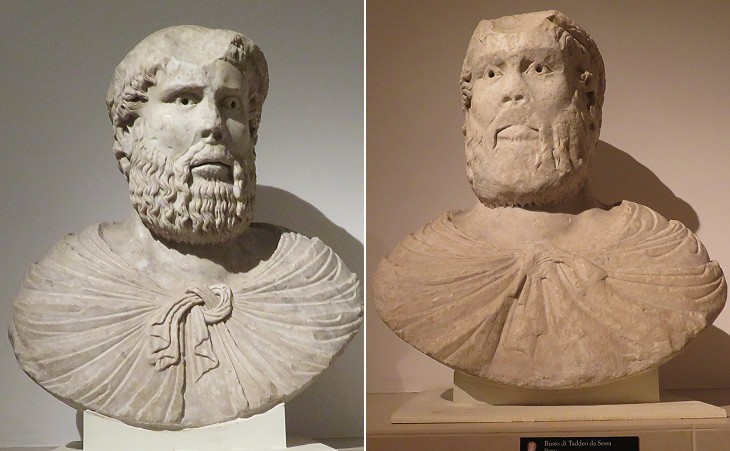 Most of the decoration of the arch is lost, but we know it included a statue of the Emperor on his throne; round niches housed busts of two of his closest advisors. Their presence was meant to be a reference to the triumph of Justice, which was the overall theme of the decoration. Of the two advisors Pier delle Vigne is better known because he presided over the promulgation of the Constitutions of Melfi, a legal code for the imperial territories in Southern Italy. In 1249 he was charged with plotting against the Emperor and he committed suicide in a tower of Pisa, where he had been jailed. 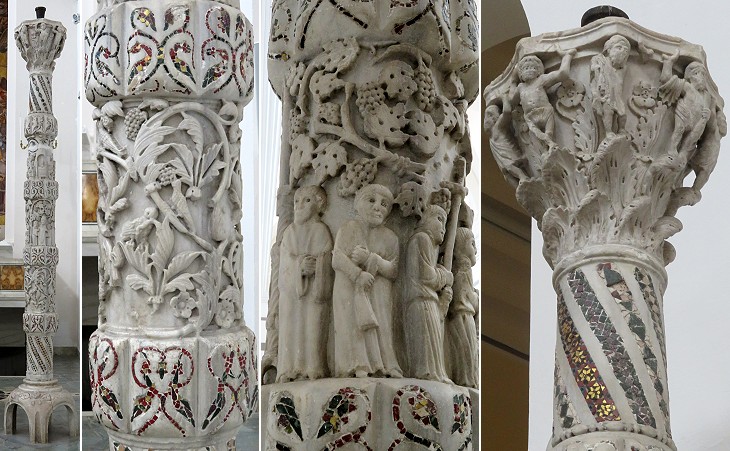 Cathedral of Capua: Easter Candelabrum; its complex decoration includes the depiction of flower and birds (left), an Easter procession (centre) and atlantes coming out of the foliage of a Corinthian capital (right)

This very elaborate Easter Candelabrum is generally dated early XIIIth century and it can stand comparison with that made by the Vassalletto for S. Paolo fuori le Mura. Both show a mix of Christian and pagan subjects. You may wish to see a slightly later Easter Candelabrum in the Cathedral of Gaeta. 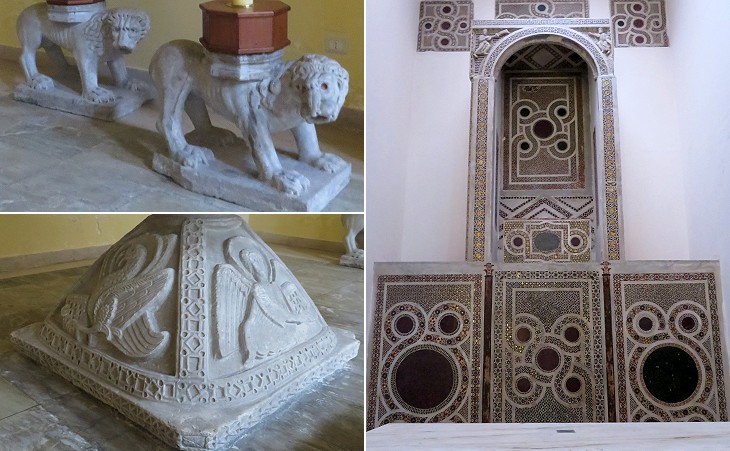 Cathedral of Capua: other medieval decorations: (left-above) lions which supported a pulpit (XIIIth century); (left-below) base of the baptismal font, but in origin it might have supported a monumental cross; it is decorated with the symbols of the Evangelists and it is dated Xth century; (right) Cosmati work decorations

The Cathedral was heavily damaged by 1943 bombings, but its medieval appearance had already been modified by changes made in the XVI/XVIIIth centuries. The quality of the remaining medieval works of art is high and it testifies to the importance of the Archbishops of Capua who had jurisdiction on many other dioceses. This authority was granted in 966 by Pope John XIII, a protégé of Holy Roman Emperor Otto, in recognition of the assistance he received from the rulers of Capua when he had to flee Rome. 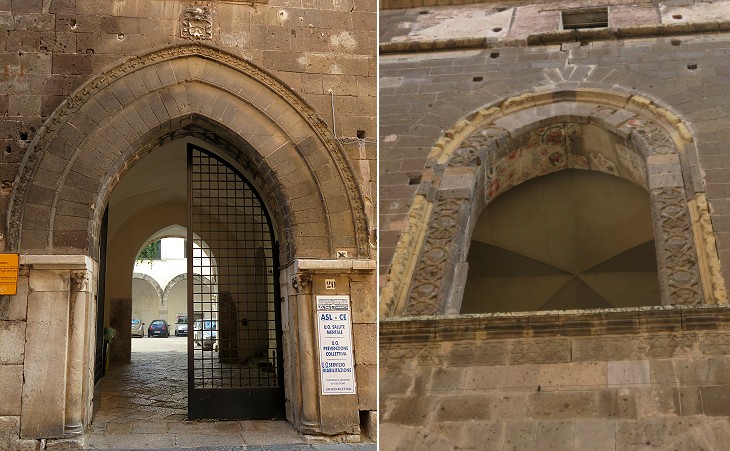 In 1266 Charles of Anjou conquered Naples and ruled over southern Italy and Sicily (the latter until 1282). A branch of the family, named after Durazzo, a fiefdom in Albania, acquired and enlarged a palace in Capua. The portal is decorated with small fleurs-de-lis, a heraldic symbol of France. In 1382 Charles of Durazzo ousted his cousin Joanna from the throne of Naples and his heirs ruled the kingdom until 1435. Eventually the palace was bought by the Fieramosca, a local noble family. Ettore Fieramosca, the Italian knight who in 1503 led a team of 13 Italian knights against a similar French team in a tournament in Barletta (near Bari), was born in this palace in 1476. He is said to have lived in Trastevere in 1512. 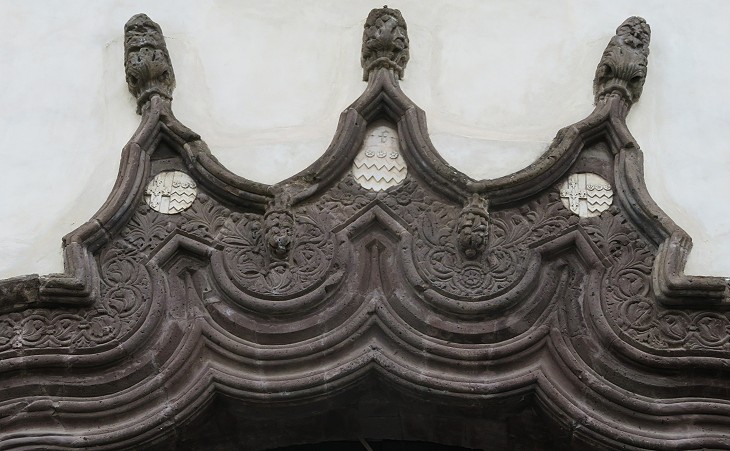 Palazzo Antignano: detail of the portal

In 1442 the Angevin rule over southern Italy was replaced by that of the Kings of Aragon who already possessed Sicily. In 1453 Francesco Antignano, a local magistrate, was authorized to enlarge and redesign a building which incorporated a deconsecrated Longobard church (of which a capital is still visible). The portal has a very unusual design because it shows at the side of the central coat of arms of the Antignano, those of the d'Alagno family. Lucrezia d'Alagno, sister-in-law of Francesco Antignano, was a young beautiful woman with whom King Alfonso of Aragon fell in love. She travelled to Rome to ask for the annulment of the king's childless marriage with Maria of Castile, but Pope Calixtus III refused to do so. According to tradition the Romans named Madama Lucrezia one of their talking statues, because it stood near her Roman palace. 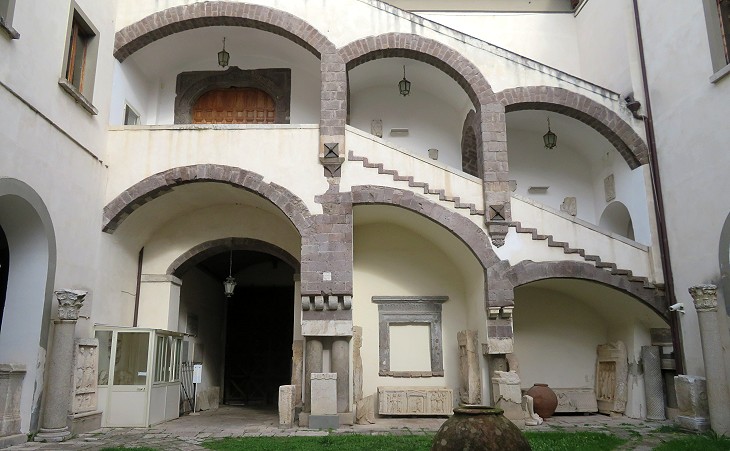 The staircase in the main courtyard combines Gothic and Renaissance features with the use of some ancient columns. In 1874 the Museum of Campania was inaugurated in the premises of Palazzo Antignano; some of its exhibits are shown also in other pages of this section. 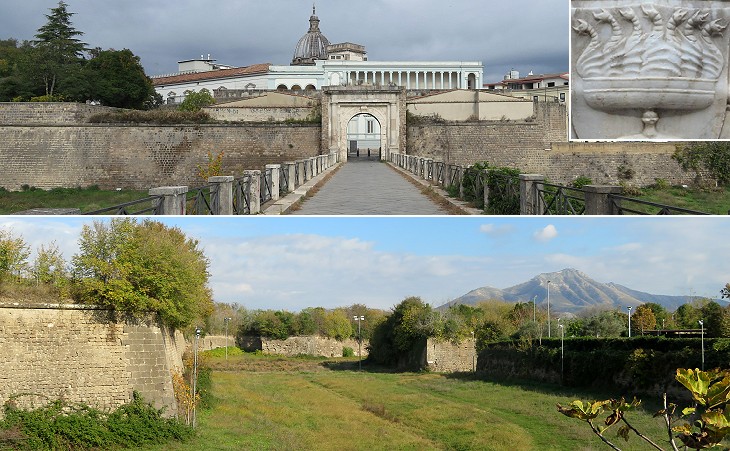 (above) Porta Napoli; (inset) old coat of arms of the town, maybe a reference to the seven enemies whom Landulph, the founder of Capua, defeated; (below) bastions of the eastern walls and Mt. Tifata in the distance

Capua is at present a neat little city fortified according to the rules of modern art, and may be considered as the key, of the kingdom; though far removed from the frontier, it is the only fortification that really covers the approach to Naples. The Volturno, a deep muddy river with high banks, may afford a good barrier against the desultory attacks of light troops, and the forerunners of an army, and thereby give leisure to the Neapolitans to prepare for resistance in the field, but unless a strong force be ready to defend the country, the river will be of little avail, as it cannot long stop the progress of a determined foe. Swinburne
Emperor Charles V stopped at Capua in March 1536 during his triumphal journey from Tunis to Rome. He gave orders to upgrade the fortifications of the town because of the threat of an Ottoman invasion of Italy. Capua retained its role of key northern fortess of the kingdom well into the XIXth century. In September 1860, Francis II, King of the Two Sicilies abandoned Naples and retreated to Capua with the troops who had remained loyal to him.
The defences of Capua had been modernised and enlarged by a Russian military architect as late as 1855. The bastions, well furnished with cannon, proved strong enough to oppose a final limit to Garibaldi's career of victory. This impregnable bridgehead of Capua enabled the Bourbon troops to cross the river whenever they wished, and to debouch on the cultivated plain on the south bank, which was admirably suited for the operations of regular troops against ill-disciplined levies.
George Macaulay Trevelyan - Garibaldi and the Making of Italy - 1910
Francis' attempt to beat the red shirts of Garibaldi in an open battle east of Capua failed and eventually the king sought refuge in the fortress of Gaeta.
At dawn on November 2 the officers eagerly turned their telescopes towards Capua, and saw the white flag hoisted on its walls. The garrison of 10,000 men became prisoners of war, and the fortress that had set a limit to Garibaldi's career at length surrendered to the Italian army. Trevelyan (left) Porta Napoli; (right) Dome of SS. Annunziata, the church was built at the same time as the new walls; its dome was repaired in 1684

The land gate of medieval Capua was situated near Castello delle Pietre. After the completion of the new walls in 1581 it was replaced by a new gate which was protected by a deep moat. It was decorated with military symbols and it vaguely resembles Arco di Tito, but it is actually almost identical to Porta Capuana in Naples. 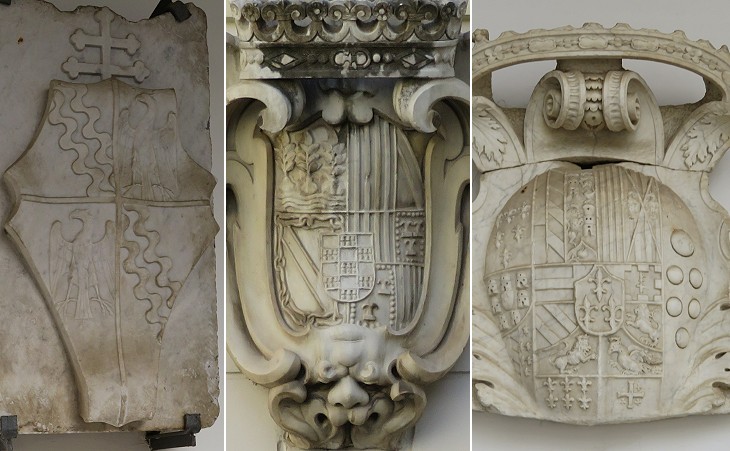 Coats of arms: (left) a Caetani Archbishop of Capua (Museum of Campania); (centre) Fernando Joaquín Fajardo, Viceroy of Naples at the time of Charles II, King of Spain at Loggia dei Giudici; (right) a Bourbon King of Naples in the Cathedral, perhaps Charles VII

Three Archbishops of Capua belonged to the Caetani family, that of Pope Boniface VIII, and two of them are buried in a lavishly decorated chapel of S. Pudenziana in Rome. The town retains coats of arms of the long rules by the Habsburg Kings of Spain (1516-1700) and by the Neapolitan branch of the Bourbon Kings of Spain (1734-1861).