Palazzo Panfilio
(Vasi at work in the Grand View of Rome) 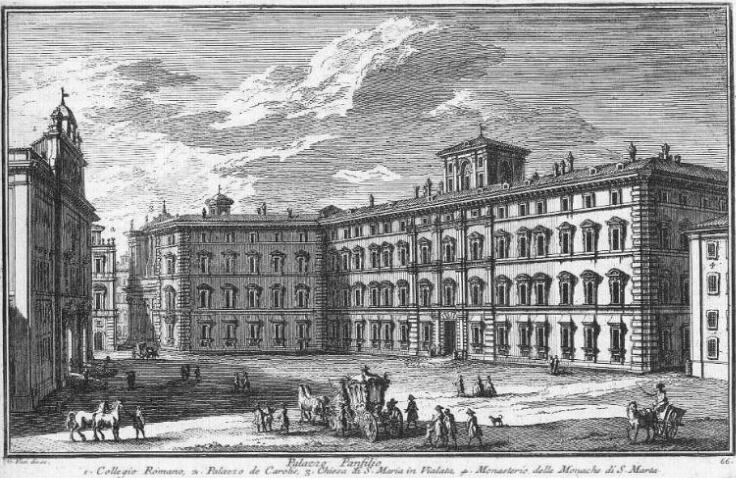 Palazzo Panfilio (today Doria Pamphilj) is made up of three adjoining buildings. In this 1754 etching Giuseppe Vasi showed the façade designed by Antonio del Grande in 1660 for that in Piazza del Collegio Romano. The other façades are shown in Plate 44 - side on Via del Corso and Plate 39 - side opposite Palazzo Venezia.
The view is taken from the green dot in the small 1748 map here below. In the description below the plate Vasi made reference to: 1) Collegio Romano; 2) Palazzo De Carolis; 3) S. Maria in Via Lata; 4) Monastero di S. Marta. 1), 2), 3), and 4) are shown in other pages. The small map shows also 5) Palazzo Doria Pamphilj. 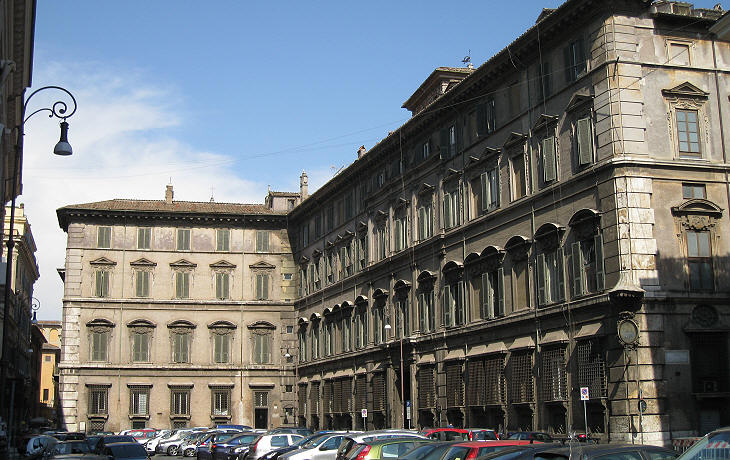 Palazzo Doria Pamphilj and Collegio Romano (built by Pope Gregory XIII in 1583 and owned by the Jesuits) still face each other, but while the palace is still a property of the Doria Pamphilj, Collegio Romano today belongs to the Italian State and it houses a high school (Liceo Ennio Quirino Visconti). Unfortunately the square is one of the very few in the centre of Rome where parking is still allowed. Palazzo Doria Pamphilj is in bad need of being repainted (see the change in the colour of many Roman palaces which has occurred in the last years). (left) Decoration of the central part of the façade behind which the palace's main halls are situated; (right) 1779 "madonnella" at the corner with Via della Gatta leading to Palazzo della Gatta or Grazioli

The Pamphilj acquired the ownership of a block of houses in Rione Pigna in 1647 when Olimpia Aldobrandini married Camillo Pamphilj, nephew of Pope Innocent X. At that time a palace belonging to the Salviati family stood between Collegio Romano and the Pamphilj property; it occupied most of the current square. The Jesuits bought that palace with the sole objective of pulling it down which they did in 1659; they then sold part of the land to Camillo Pamphilj who commissioned Antonio del Grande a redesign of his properties and the construction of a new façade.

Reference to the Pamphilj's heraldic symbol, a dove, is everywhere (in the loggia there is also a reference to the Aldobrandini family as stars and stripes were their heraldic symbols). In 1671 Anna, daughter of Camillo Pamphilj married Giovanni Andrea III Doria Landi and in 1760 the Doria Landi inherited the palace because the Roman Pamphilj branch was extinct. The Doria were a very important Genoese noble family; Andrea Doria was the admiral of the Spanish fleet at the time of Emperor Charles V; their heraldic symbol was an eagle, but they preferred not to add eagles to the decoration of the palace, perhaps for fear of scaring the doves. The Landi had many fiefdoms between Genoa and Parma, which the Doria acquired in 1626 when Polissena Maria Landi, the last of her family, married Giovanni Andrea II Doria.
The image used as background for this page shows the Pamphilj coat of arms above the entrance to the palace, but inside it a "full" coat of arms of the Pamphilj Doria Landi on a tapestry is on display (it opens in another window). 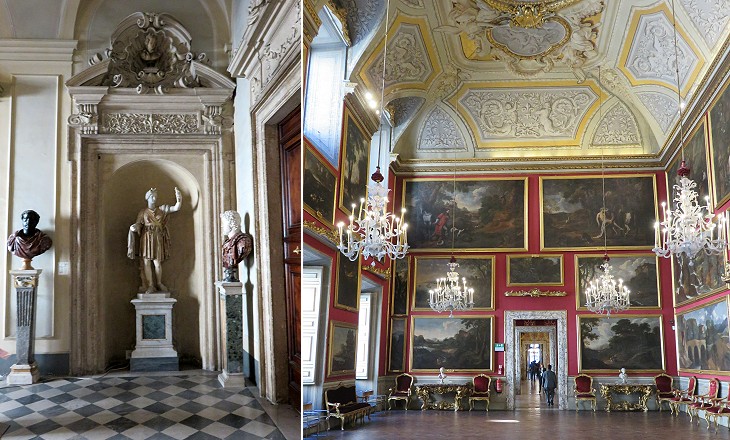 (left) A detail of the staircase by Del Grande; (right) Sala del Pussino, because of the landscape paintings by Gaspard Dughet, a relative of Nicolas Poussin. This hall and the adjoining ones have very high ceilings and a double row of windows

Yesterday, we went to the Pamfili Doria Palace, which, I believe, is the most splendid in Rome. The entrance is from the Corso into a court, surrounded by a colonnade, and having a space of luxuriant verdure and ornamental shrubbery in the centre. The apartments containing pictures and sculptures are fifteen in number, and run quite round the court in the first piano, all the rooms, halls, and galleries of beautiful proportion, with vaulted roofs, some of which glow with frescos; and all are colder and more comfortless than can possibly be imagined without having been in them. The pictures, most of them, interested me very little. I am of opinion that good pictures are quite as rare as good poets.
Nataniel Hawthorne - Italian Notebooks - 1858 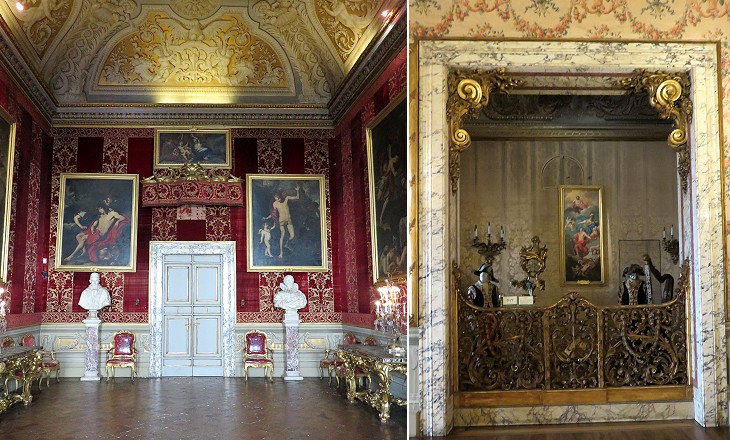 The decoration of the palace is in general XVIIIth century, but there are many paintings of the XVIIth century, whereas some rooms (e.g. the Ball Room) were redesigned and redecorated in the XIXth century. In general the last changes are of inferior quality, although they probably made living in the apartments more comfortable. John Cheever in 1957 noted that the rooms at Palazzo Doria Pamphilj were a splendid place for signing treaties, less so for ordinary needs (he lived in an apartment in the southern side of the palace). 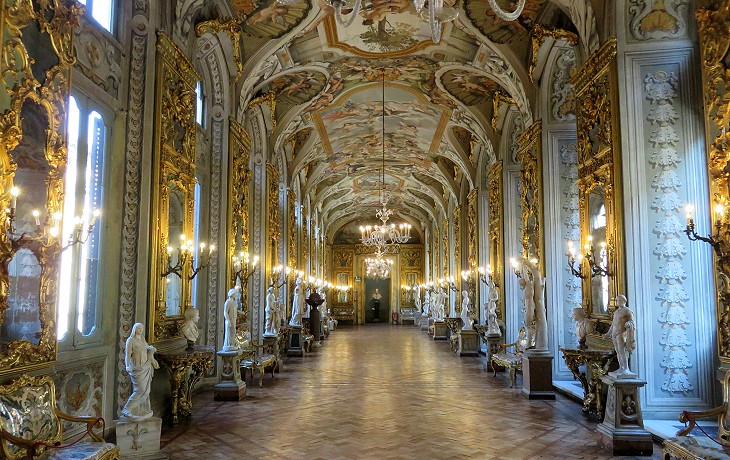 The gallery of paintings and sculptures is housed in four long halls surrounding the courtyard of the palace in Via del Corso. The wing receiving light from both sides was decorated with Venetian mirrors in an attempt to imitate the Galerie des Glaces of Versailles (it opens in another window). It is the most impressive hall of the three palaces. It was designed by Gabriele Valvassori. 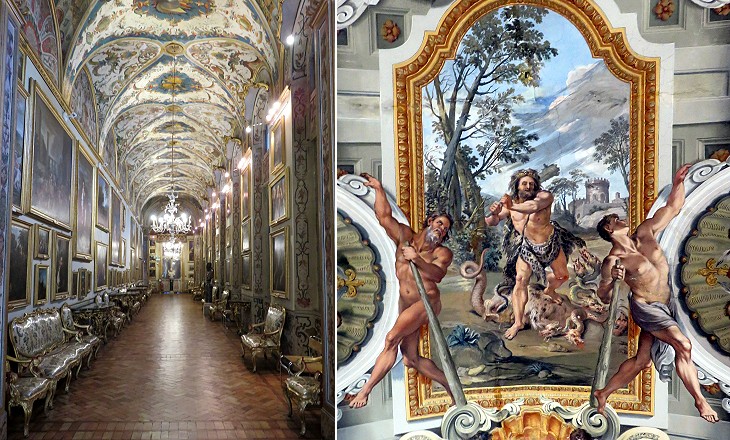 (left) Southern wing; (right) ceiling of Galleria degli Specchi with scenes of the Labours of Hercules by Aureliano Milani (1733)

The Colonna decorated the main halls of their palace (which is very near that of the Doria Pamphilj) with various facets of the same theme: the involvement of Marcantonio II Colonna in the Battle of Lepanto. The Pamphilj could have done the same with events from the life of Andrea Doria who fought in the same battle or of Pope Innocent X (e.g. his involvement in the conquest of the Duchy of Castro or the monuments he erected for the 1650 Jubilee), but they chose instead a variety of subjects, which are nice to see, but are void of interest. 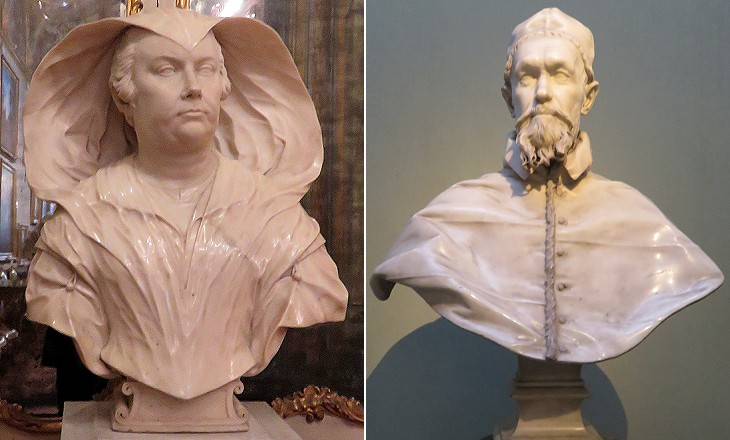 The two busts are placed at the opposite corners of the gallery as if to highlight the rivalry between Algardi and Bernini. Olimpia Maidalchini was sixty when Algardi made her portrait which is unflattering (but the face has a classical nobility). The sculptor showed his extreme technical skill in the widow hood which surrounds the head. It was a way to distance himself from Bernini who was known for his rapidity of execution and would not have spent so much time on a single statue.
Bernini enjoyed a close relationship with Pope Urban VIII, much less with Pope Innocent X, his successor, who chose to be portrayed by Algardi in a a large bronze statue, now in Sala degli Orazi at Palazzo dei Conservatori. A bust by Bernini however was a "must" for an important person of his time and Pope Innocent X decided he would have one. In that shown above he is portrayed as a hero, rather than as a pope and he definitely does not show his 75 years (you may wish to see the busts of Cardinal Richelieu and of Pope Urban VIII by Bernini).

Sarcophagus with a relief depicting the myth of Selene, a lunar goddess, and Endymion, a handsome shepherd (IIIrd century AD); see a similar one at Musei Capitolini

Endymion was lying asleep in a cave one still night when Selene first saw him, lay down by his side, and gently kissed his closed eyes. Afterwards he fell into a dreamless sleep, because Selene found that she preferred gently kissing him to being the object of his too fertile passion. He has never grown a day older, and preserves the bloom of youth on his cheeks. From Robert Graves - The Greek Myths.
In addition to a very large number of paintings, the gallery houses some ancient statues and sarcophagi. 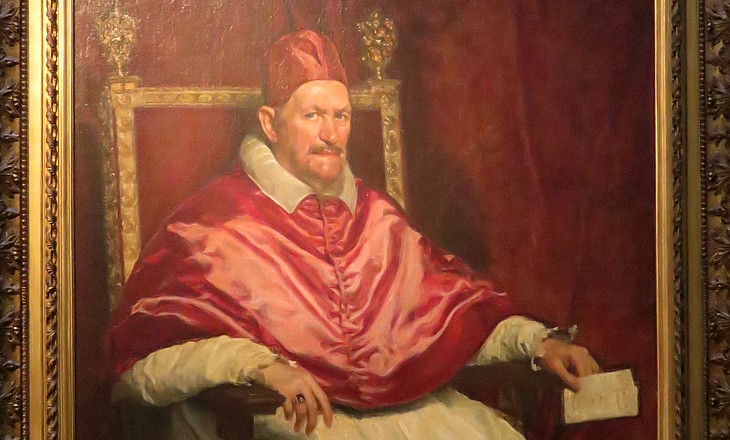 Some of the works of art at Galleria Doria Pamphilj were initially meant for the decoration of Palazzo Pamphilj a Piazza Navona or come from palaces of the Doria Landi in Genoa.
You may wish to visit the website of the gallery (it opens in another window).