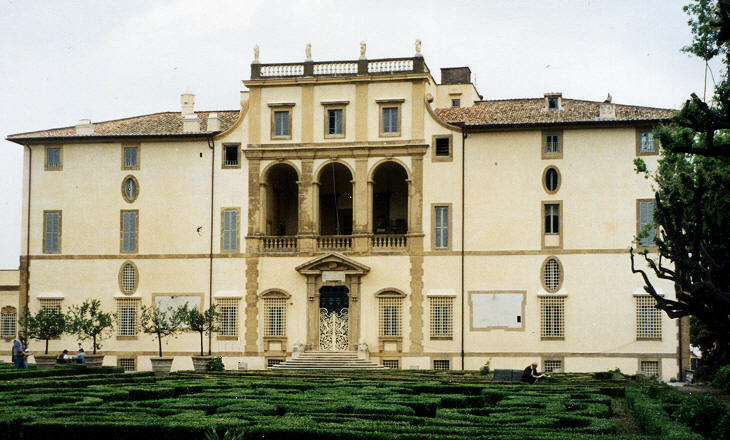 Villa Lancellotti is also known as Villa Piccolomini as it belonged to this family (that of Pope Pius II) for more than two hundred years. It is located very near Frascati and it is not surrounded by a very large garden. The façade of the casino shows a simple late Renaissance design, while its central part was modified in the XVIIIth century. The terrace commands a view over Rome, but on the other side it is almost dominated by Villa Aldobrandini which is situated on higher ground. 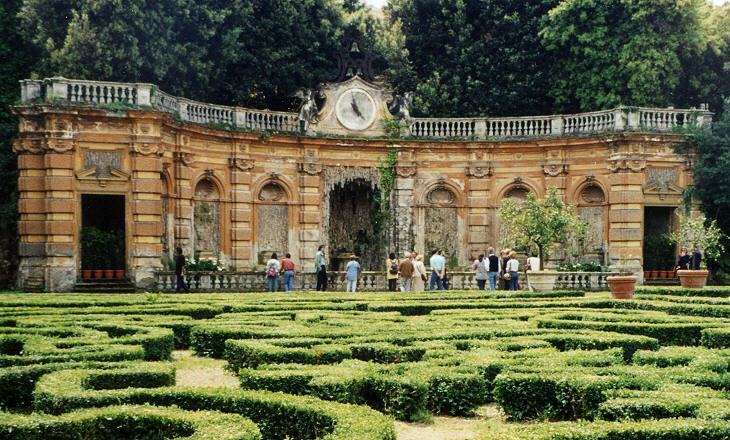 According to some art historians the Teatro delle Acque, i.e. a large nymphaeum similar to those of the ancient Romans, which was decorated with artificial caves and statues, was designed as early as 1590, so it precedes those of the other villas. (left) Former 1877 entrance to Villa La Rufinella with the coat of arms of the Lancellotti; the Latin inscription says "Entrance to Rufinella (is) ornament of the City of Tusculum (Frascati); (right) statue portraying Telegonus, son of Ulysses and Circe, the legendary founder of Tusculum, the ancient town out of which Frascati originated

Elisabetta Borghese Aldobrandini and her husband Filippo Lancellotti bought the villa in 1866 and a few years later they bought Villa La Rufinella (aka Tuscolana), an adjoining property with a very large garden. In 1877 they built a grand entrance which gave access to both villas. Today this section of the property is a public park known as Giardino dell'Ombrellino. 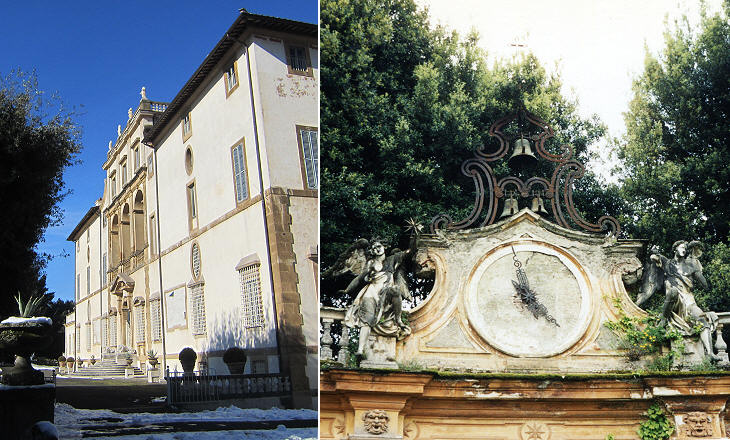 (left) Another view of the casino; (right) detail of the clock 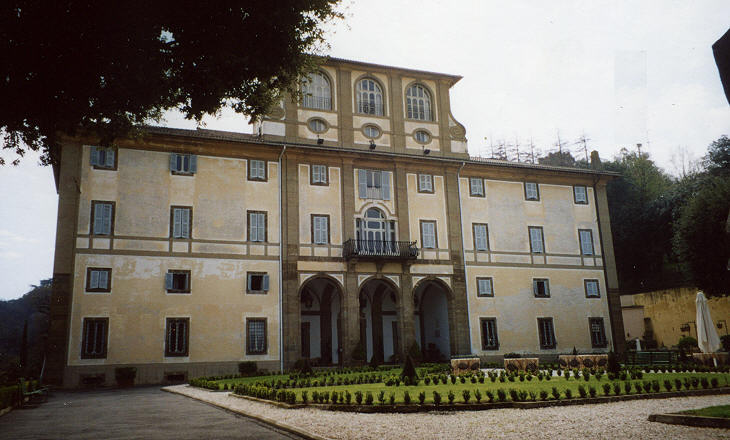 We paid a visit to the Villa Rufinella, which is splendidly situated on the summit of a hill, and commanding a prospect hardly inferior to that from the site of Tusculum. The lawn in front and the portico contained many works in marble, more or less dilapidated, which had been found in the neighborhood, and not deemed worthy of being transferred to a more ambitious museum. (..) This villa was unoccupied except by a steward, or bailiff, who looked after the grounds and received the visitors.
George Stillman Hillard - Six Months in Italy in 1847-1848
Villa Tuscolana aka la Rufinella was the second villa built by Alessandro Ruffini, a prelate of the papal court. It is located almost at the top of the hill behind Frascati, above Villa Aldobrandini. For this reason in 1604 it was bought by Cardinal Pietro Aldobrandini who did not want to have neighbours who could watch what was going on at his property.

In ca 1649 the villa was bought by Cardinal Giulio Sacchetti, Bishop of Frascati, who at the same time bought a palace in Via Giulia. Giulio Sacchetti was of Florentine origin and Pope Urban VIII Barberini who created him cardinal was born in Florence. After the death of the Pope, Sacchetti's election was supported by the Barberini, but it was vetoed by Spain. This occurred again at the conclave of 1655.
In 1740 the villa was sold to the Jesuits who turned it into the summer residence of Collegio Romano. The old casino was replaced by a new massive building designed by Luigi Vanvitelli. In the early XIXth century it was bought by Lucien Bonaparte, Prince of Canino and later on by the Lancellotti. In recent years it was turned into a hotel. 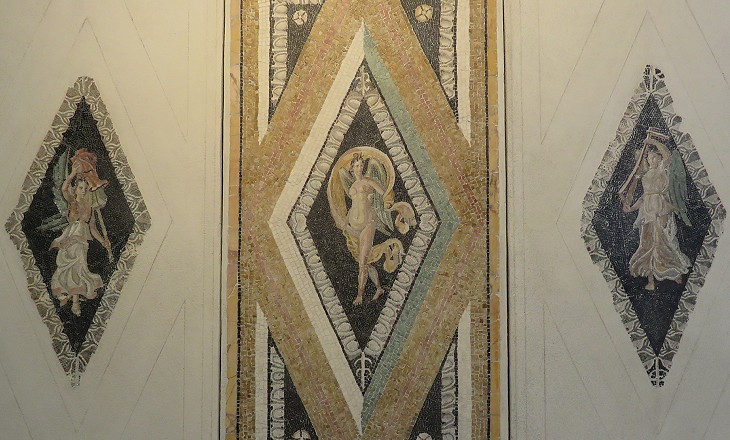 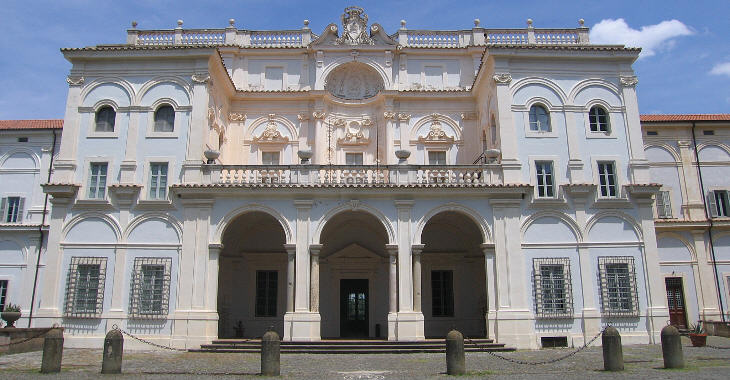 The villa was initially built by Alessandro Ruffini in 1549 and thus it is also called Villa la Rufina. Ruffini was supported in his effort by Pope Paul III, who, having been Bishop of Frascati, promoted the development of the town. It is considered the oldest of the villas of Frascati. The main building was largely redesigned by Francesco Borromini after the villa was bought by Orazio Falconieri in 1628.

Orazio Falconieri belonged to a noble Florentine family. His uncle Lelio was created cardinal by Pope Urban VIII in 1643. The Falconieri bought a palace in Via Giulia and were given the apse of S. Giovanni dei Fiorentini as a family chapel. 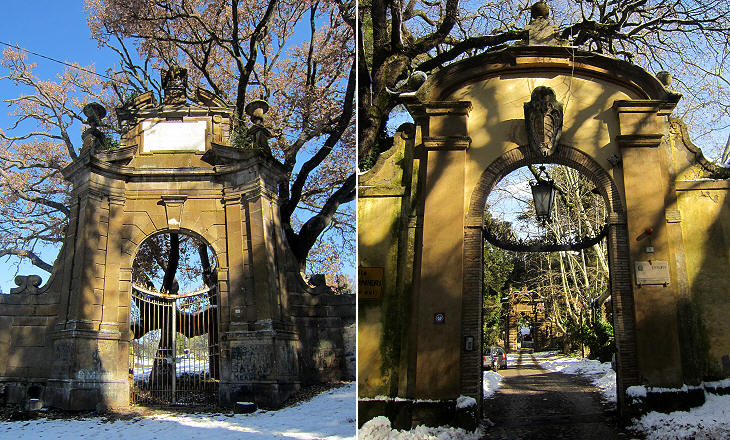 In 1733 Cardinal Alessandro Falconieri decided to provide his villa with an entrance comparable to Portale delle Armi, the sort of triumphal arch built by Cardinal Scipione Borghese for Villa Taverna. Hovever in the years during which the property was neglected a tree blocked the alley leading to the casino.
By 1865 the Falconieri family was extinct and after several changes of property the villa was bought by Ernst von Mendelssohn-Bartholdy, a rich German banker who bequeathed it to Emperor William II. Similar to Palazzo Caffarelli, it was confiscated in 1918 and it now houses institutions of the Italian school system.
Some of the images which illustrate Villa Falconieri were taken in February 2012, shortly after an unusually heavy snowstorm. 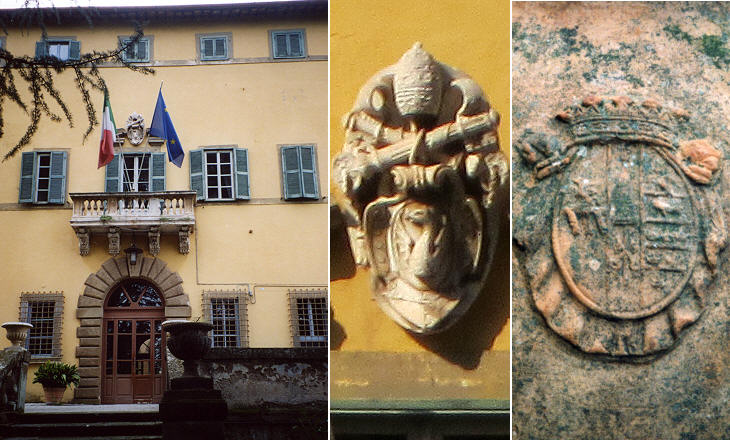 Villa Sora was built in the XVIth century and in 1600 it was sold to Giacomo Boncompagni, son of Pope Gregory XIII. He was Duke of Sora, a town near Veroli, but in the Kingdom of Naples. Several properties of the Boncompagni, including a palace in Rome are named after this town. The Boncompagni sold the villa in 1896. Today it houses a school of the Salesians of Don Bosco. 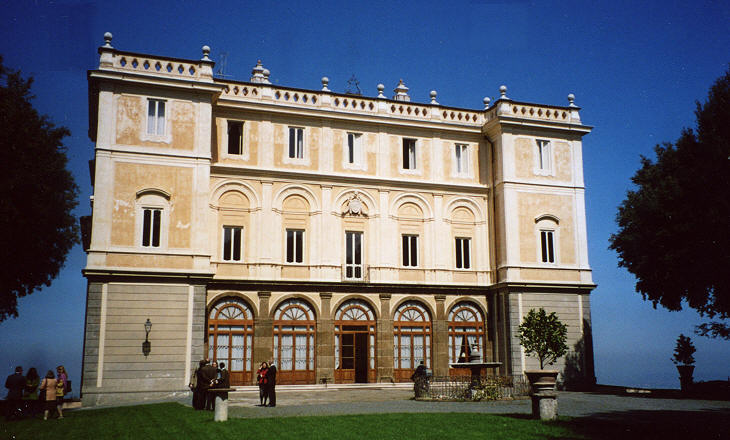 The villa was built by Cardinal Antonio Carafa, nephew of Pope Paul IV in ca 1580. In 1607 it was bought by Cardinal Scipione Borghese, nephew of Pope Paul V. In 1614 it was exchanged with that of Cardinal Ferdinando Taverna which was located near Villa Mondragone. Cardinal Taverna eventually sold the villa to the Peretti Montalto, the family of Pope Sixtus V. After other changes in ownership it was bought by the Grazioli, rich XIXth century landowners, in 1843. The villa was damaged during WWII and it was utlized to provide temporary accommodation to the many inhabitants of Frascati who lost their homes when the town was bombed in September 1943. Today it houses a hotel.

The image in the background of this page shows a large Roman jar with an XVIIIth century decoration at Giardino dell'Ombrellino.


Next step in your tour of the Environs of Rome: Grottaferrata