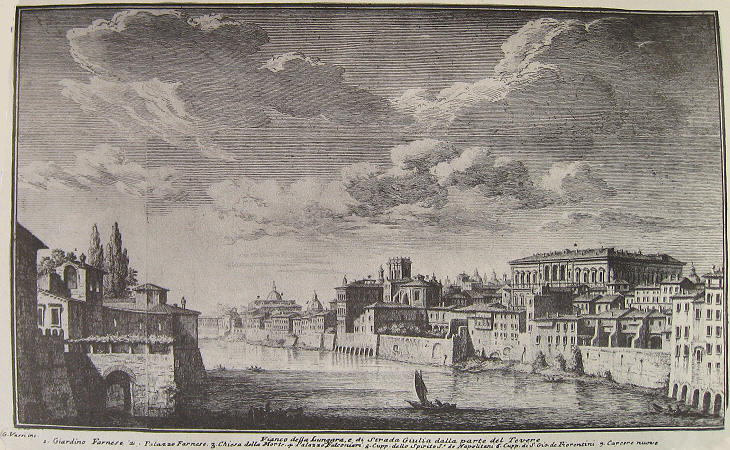 In the first edition of Book V which covered the monuments along the River Tiber and which was published in the first months of 1754, Giuseppe Vasi made use of some copperplates he had engraved in the 1740s for Vedute di Roma sul Tevere, a book covering the same subject, but with views of a smaller size. In the plate shown above Vasi enlarged the original view by adding more sky in the upper part and a larger coverage of Giardino Farnese on the left; the additions are clearly noticeable. The plate was not numbered. 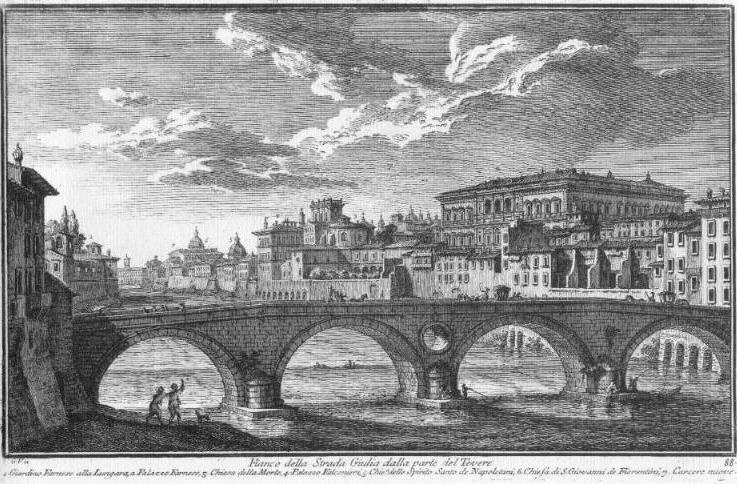 By the end of 1754 Vasi published a second edition of Book V and he replaced the patched view of the river between Via della Lungara and Strada Giulia with a new one which covered also Ponte Sisto and gave more relevance to the buildings along Strada Giulia. In the new edition the plate was numbered as 88, the number previously used for a plate covering Giardino Farnese.
Via della Lungara and Strada Giulia are two streets opened by Pope Julius II at the beginning of the XVIth century to facilitate access to the Vatican from Trastevere and from Ponte Sisto.
The view (in the final plate) is taken from the green dot in the small 1748 map here below. In the description below this plate Vasi made reference to: 1) Giardino Farnese; 2) Palazzo Farnese; 3) Chiesa dell'Orazione e della Morte; 4) Palazzo Falconieri; 5) Spirito Santo dei Napoletani; 6) S. Giovanni dei Fiorentini; 7) Carcere Nuovo. All but 2) and 4) are shown in detail in other pages. The small map does not show S. Giovanni dei Fiorentini and Carcere Nuovo which are situated towards the end of Via Giulia, but it shows: 6) Collegio Ghislieri. 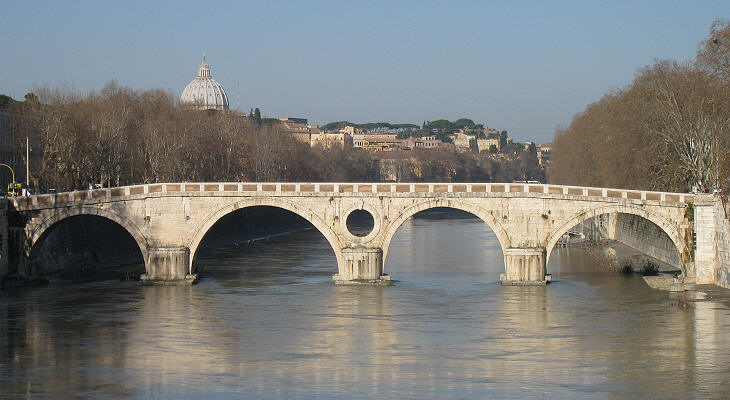 Ponte Sisto in January 2010 from Ponte Giuseppe Garibaldi (in the background the dome of S. Pietro) 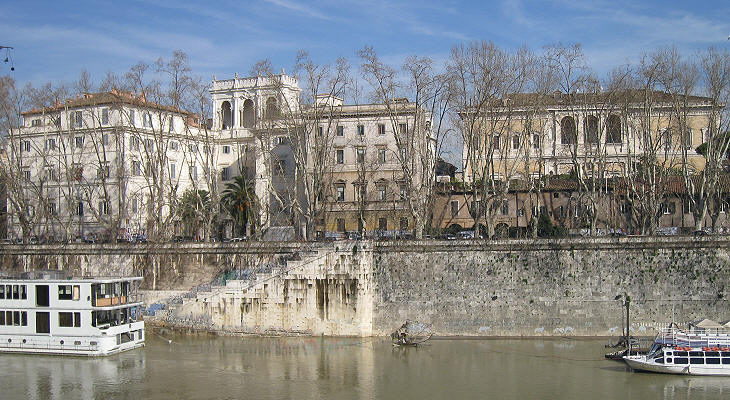 Today the view is necessarily split into two pictures. A frontal view of Ponte Sisto requires the camera to be placed at some distance from the bridge; from that point the buildings along the river are not visible also because of the curtains of plane trees flanking the modern streets (lungotevere) on the two sides of the river.
A bend of the river and the trees hide S. Giovanni dei Fiorentini and the other buildings shown in the plate with the exception of Palazzo Farnese and Palazzo Falconieri. Vasi's view was sketched at sunset in summer, whereas the images above were taken in the morning and in winter to minimize the impact of the trees.
You may wish to see this very section of the river bank before the construction of the walls in the 1880s in a page showing other lost corners of Rome. 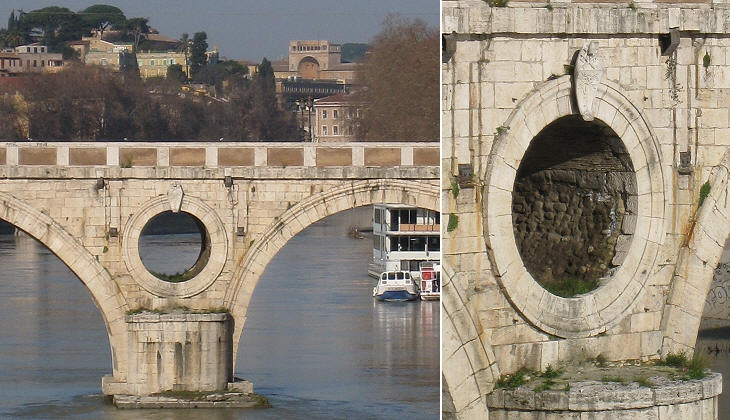 The bridges of Ancient Rome: The fourth bridge is called Ponte Sisto of Pope Sixtus the fourth, who repaired it. It was of old called Janiculensis of that Mount, and Aurelius of the way of that name, and it was built of marble by Antoninus Pius, and after being decaied, was long called Ponte Rotto, that is, the broken bridge, till the said Pope repaired it in the yeere I475 and it is two hundred and fifteene foote broad, and is built upon three Arches of stone.
Fynes Moryson - An Itinerary: Containing His Ten Years Travel Through .. Italy (in 1594)
Ponte Sisto was built in 1474 by Pope Sixtus IV on the site of Pons Aurelius, an ancient Roman bridge which was damaged by a flood in 792. The inner structure of the pillars and sections of the arches belong to the ancient bridge. Plate 89 shows the other side of Ponte Sisto and that page has other images/details on the bridge.

The central "eye" provides an additional passage for the water and thus decreases the pressure on the pillars; in the past it also allowed easy measuring of the level of the river and it was a warning indicator of an incoming flood. Learn more about these floods. 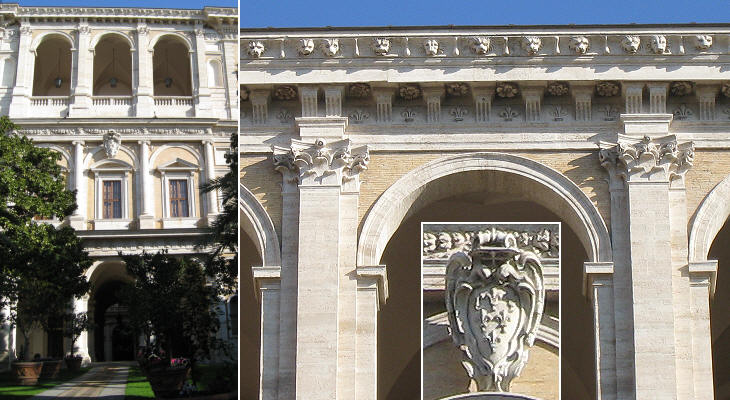 The façade of Palazzo Farnese towards the Tiber was the last part of the building to be completed; it was designed by il Vignola and by Giacomo della Porta to whom in particular is attributed the loggia; at that time the palace was the residence of Cardinal Alessandro Farnese. He financed the construction of il Gesù and he built a very large palace at Caprarola and Orti Farnesiani, a villa on the Palatine Hill . 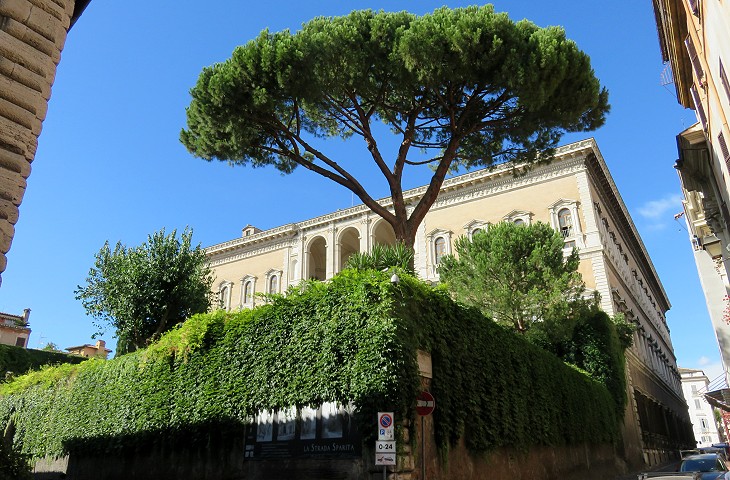 Rear side of Palazzo Farnese seen from Fontana del Mascherone in Via Giulia in 2016, before the pine tree was cut for safety reasons In about 1640 (..) Borromini extended a mid-sixteenth-century front from seven to eleven bays. He framed the facade with huge herms ending in falcons' heads, an emblematic conceit which had no precedent. He added new wings on the rear facing the river and provided decoration for porch and vestibule. But his most signal contribution is the twelve ceilings with their elaborate floral ornament, and, overlooking the courtyard, the Palladian loggia. (..) The U-shaped river front, dominated by the loggia, gives proof of the versatility of Borrromini's extraordinary genius.
Rudolf Wittkower - Art and Architecture in Italy 1600-1750 Penguin Books 1958
Palazzo Falconieri was built in the XVIth century for the Odescalchi family, but in 1606 it was bought by the Farnese who sold it to Orazio Falconieri in 1638; the Falconieri were a rich family of Florentine origin (the main altar of S. Giovanni dei Fiorentini was decorated at their expense). The building was enlarged by Francesco Borromini who added a second portal on the façade in Via Giulia and designed a very elegant loggia on the back of the palace. Borromini was also involved in the redesign of Villa Falconieri di Frascati. 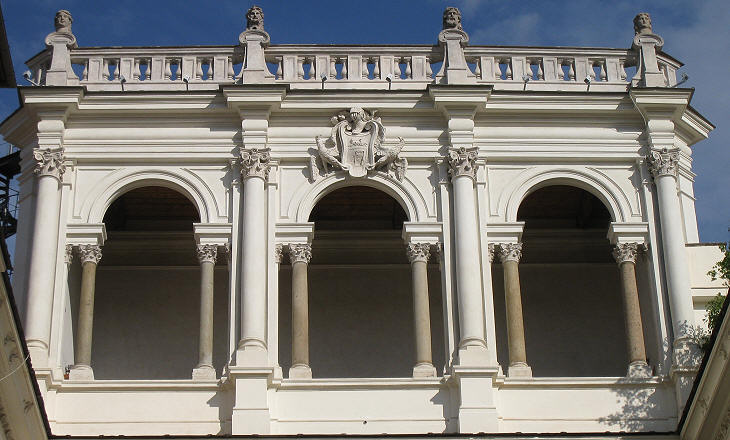 Falconieri means falconers and thus the decoration of the building is based on falcons. The image used as background for this page shows a falcon head which decorates the façade in Via Giulia. In the late XIXth century the palace was sold to Giacomo Medici del Vascello; he was known for his strenuous resistance at Villa del Vascello during the 1849 Defence of the Roman Republic; in 1876 in consideration of his long military career he was appointed Marchese del Vascello; a coat of arms was designed for the new noble family; it portrays the Roman she-wolf with the twins and the ruins of il Vascello.
Today the palace houses the Hungarian Academy of Rome. 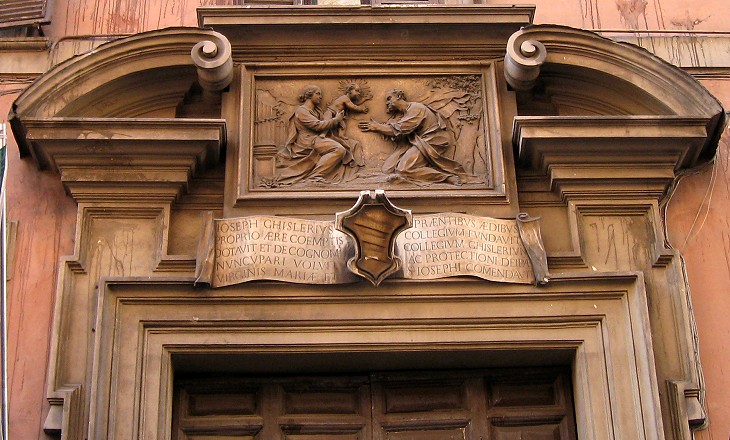 The eastern section of Via Giulia retains some other interesting buildings, in addition to Palazzo Falconieri. Giuseppe Ghislieri, a doctor and a distant relative of Pope Pius V founded in 1630 an institution for the education of 24 students belonging to noble families who could not pay tuition fees. The institution was moved in 1670 to a palace in Via Giulia of which only the portal remains, because the rest of the building was demolished to make room for a high school. Palazzo Cisterna and Palazzo Baldoca are two adjoining XVIth century buildings named after their later owners (Cisterna XIXth century; Baldoca XVIIth century). In the XVIth century they belonged to the sculptor Guglielmo della Porta, who is best known for the monument to Pope Paul III in S. Pietro. Some windows retain a complex inscription making reference to him.