In 1730 Cardinal Lorenzo Corsini was elected Pope Clement XII. He was 78 and during his long career in the Papal administration he had held the post of Commissario del Mare, which gave him authority on all matters related to the ports of the country. In this capacity he had realized that they needed new facilities and in 1733 he commissioned Luigi Vanvitelli, a young architect, a series of improvements to the port of Ancona. They included a lazzaretto, an isolated facility where travellers and seamen coming from ports affected by epidemics had to wait for forty days (It. quarantena) before being allowed to disembark. 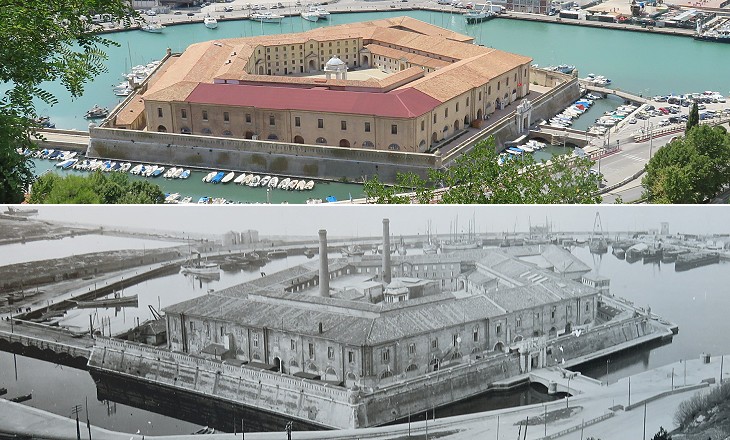 Lazzaretto seen from the Citadel: today (above) and in a 1930s photograph when it housed a factory (below)

Lazzaretto initially was a word indicating a leprosary, because it derived from the beggar Lazarus (Luke 16:19) who suffered of leprosy. Vanvitelli visited other Italian ports such as Leghorn and Venice where these facilities already existed to understand how they were run. He eventually designed a pentagonal fortress on an artificial islet inside the harbour. Its shape recalls those of the XVIth century walls of Castel Sant'Angelo and of Palazzo Farnese at Caprarola. The stone bridge was built in the XIXth century after the complex ceased to be used as a lazzaretto. Vanvitelli did not build a church, but an open small chapel at the centre of the courtyard to limit contacts among the quarantined inmates and between them and the soldiers of the garrison. Mass was celebrated at the chapel, but the soldiers ensured the inmates did not come close to it and attended the ceremony from a distance. As a matter of fact these measures at Ancona and elsewhere in Europe proved effective and the XVIIIth century did not see those major epidemics of bubonic plague which had been recorded in the previous century. 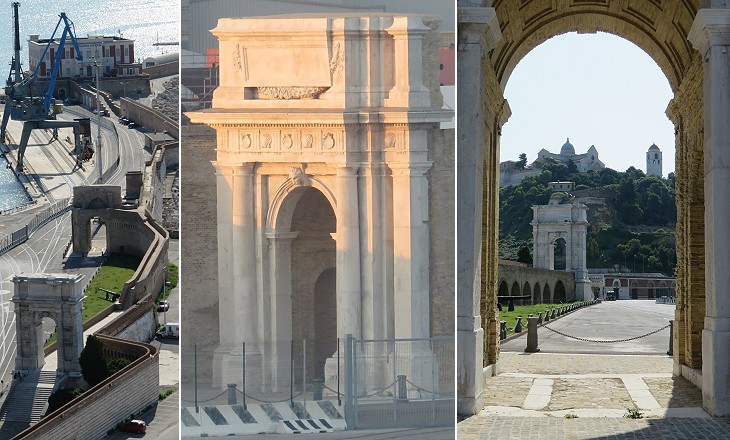 Vanvitelli enlarged the harbour by extending the Roman mole. He designed a triumphal arch similar to Arco di Traiano to celebrate the completion of the project. It had the front towards the sea, unlike the ancient one. The inscription was erased during the French occupation of Ancona. It should have been topped by a statue of Pope Clement XII which eventually was placed in Piazza del Popolo (you can see it in the image used as background for this page). 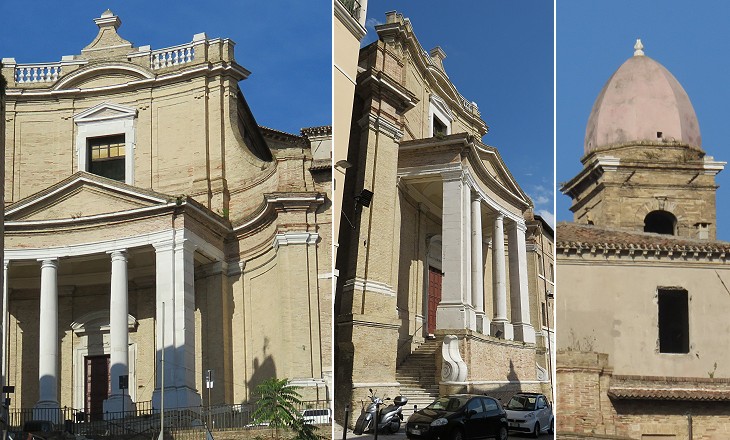 Vanvitelli began his career as a painter at the workshop of Gaspar Van Wittel, his father, who was famous for his landscape views of Rome. Vanvitelli participated in the contests for Fontana di Trevi and the new façade of S. Giovanni in Laterano. His projects did not win, but were highly praised. During his stay at Ancona, Vanvitelli was involved in the design of many buildings in town and in other nearby locations (e.g. Chiesa del Gesù and Palazzo Ferretti in Ancona, bell tower of Basilica di Loreto and Chiesa della Maddalena in Pesaro). 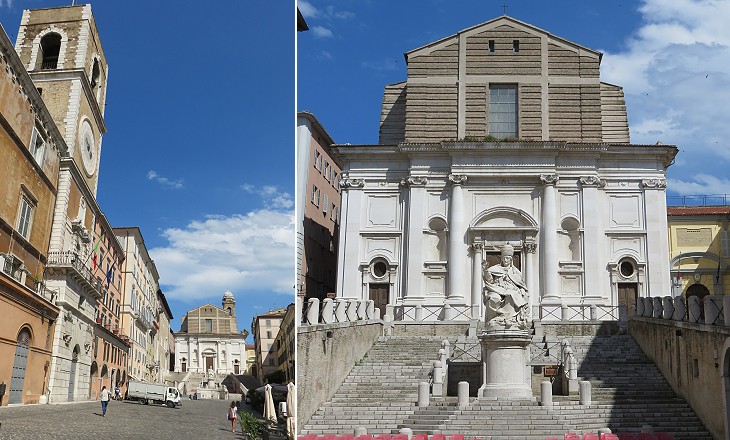 This very long square was opened in the XVth century and it became the centre of the town, a sort of "sitting room" similar to Piazza del Popolo in Ascoli. It had many names: Nuova, Grande, Napoleone, S. Domenico and del Popolo, but the inhabitants have always called it Piazza del Papa, after a large statue of Pope Clement XII by Filippo Cornacchini which was placed there in 1738. It was enlarged in 1763 when Chiesa dell'Incoronata, an old small church, was pulled down and replaced by S. Domenico in a rear position. S. Domenico was designed by Carlo Marchionni who began his career as a sculptor, but became an architect, probably because Vanvitelli and Ferdinando Fuga, another famous architect protected by Pope Clement XII, left Rome for Naples in 1750. Marchionni's best known works are Casino di Villa Albani and Sacrestia di S. Pietro. The decoration of S. Domenico was assigned to Gioacchino Varlè, a young sculptor from Rome who eventually spent most of his life at Ancona. 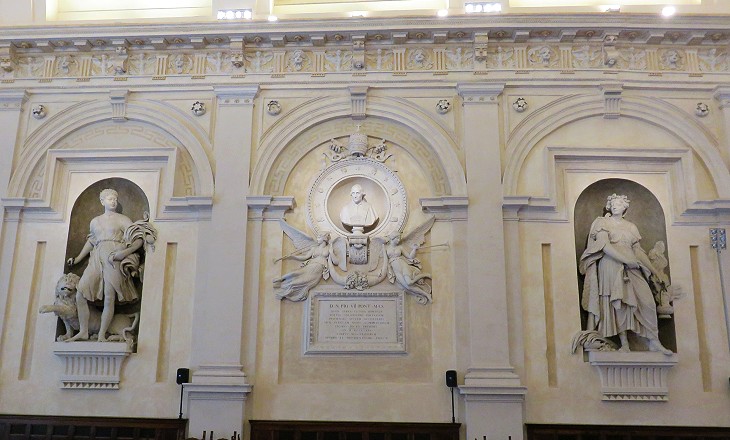 Loggia dei Mercanti: statues of Africa (left) and Asia (right) by Gioacchino Varlè (ca 1758) at the sides of an 1821 bust of Pope Pius VII

The geographers of the Ancient World divided the landmasses surrounding the Mediterranean Sea into two (Europe and Asia) or three (Europe, Asia and Libya/Africa) parts. This division did not have a main impact on military and religious leaders who preferred to divide the world into East and West (e.g. the double-headed eagle of many empires and of the Greek Orthodox Church).
The geographical discoveries of the XVth and XVIth centuries led to the identification of four parts of the world. In the XVIIth century this partition into four became popular in Rome because it was used to celebrate the Popes and the Catholic Church as Masters of the World in Piazza Navona (Fontana dei Fiumi) and in S. Ignazio (ceiling). Varlè decorated with statues of the four continents the interior of Loggia dei Mercanti, perhaps as a tribute to the relatively cosmopolitan population of Ancona. 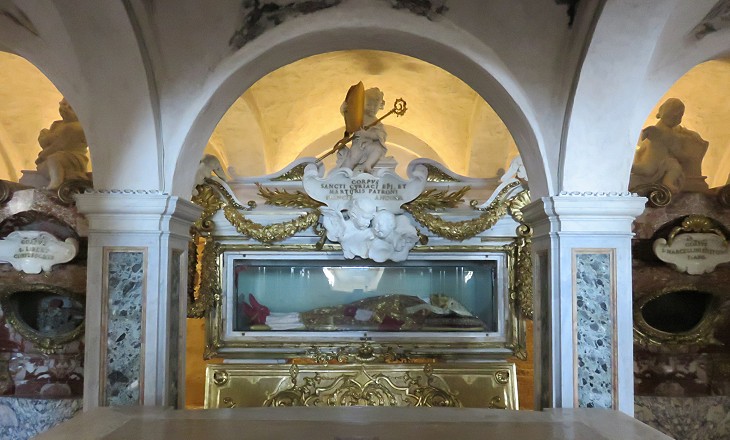 In December 1755 the sarcophagus of St. Cyriacus of Ancona was opened to check its content. The body of the saint was found incorrupt (i.e. without signs of decomposition) and it was decided to place it in a monument with glass panels to allow its view. In 1782 Pope Pius VI, on his way back from Vienna, stopped at Ancona to see it and in 1800 Pope Pius VII did the same on his way to Rome after the election which had occurred in Venice. 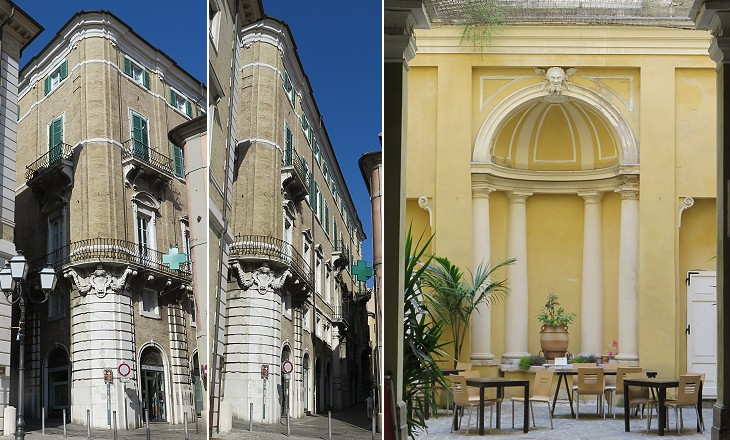 The largest XVth and XVIth century palaces of Ancona belonged to families with a mercantile background, whereas those of the XVIIIth century were built by families whose members held important positions in the papal administration. Cardinal Giovanni Giacomo Millo came to Ancona in 1727 as assistant to Bishop Prospero Lambertini. After the latter became Pope Benedict XIV in 1740 Millo was assigned a series of important position in the Roman Curia and in 1753 he was created cardinal. His family was ascribed to the nobility of Bologna and of Ancona. 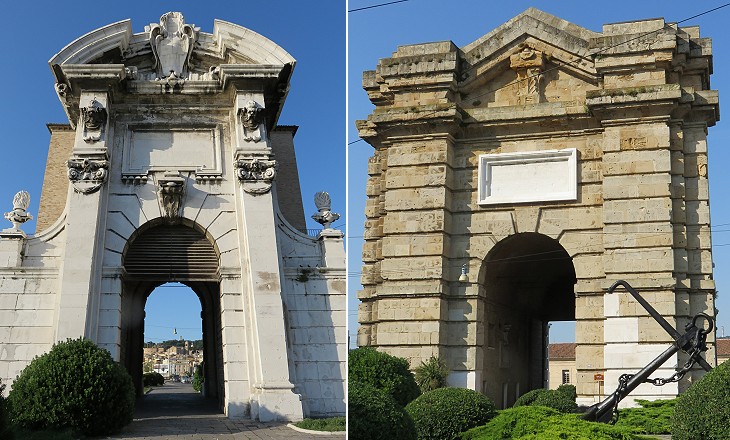 When Pope Pius VI visited Ancona he entered the town at Porta Capodimonte (now lost) which was situated near the Citadel at the end of a steep and dangerous road. He therefore decided to open a new road by the sea to allow travellers an easier access to the town. The completion of the road was celebrated by the construction of a triumphal arch designed by Filippo Marchionni, son of Carlo. Pope Pius VI was very keen on having his coat of arms and heraldic symbols placed everywhere, but many of them, including those at Porta Pia, were erased by the French (you may wish to see a page on this topic). 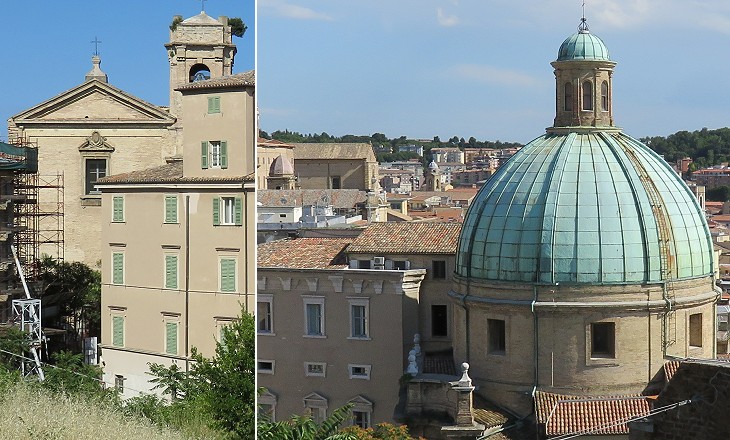 The Papal Legati (governors) lived at Palazzo del Governo in Piazza del Popolo, but the Bishops of Ancona lived near S. Ciriaco and the surrounding neighbourhood was the religious heart of the town. Orders (Carmelites at SS. Pellegrino e Teresa) and brotherhoods (Armenian community at S. Gregorio Illuminatore) chose to build their churches there. The dome of SS. Pellegrino e Teresa is a landmark of all Ancona views as you can see in the images below. 1930s Ancona and below today's Ancona 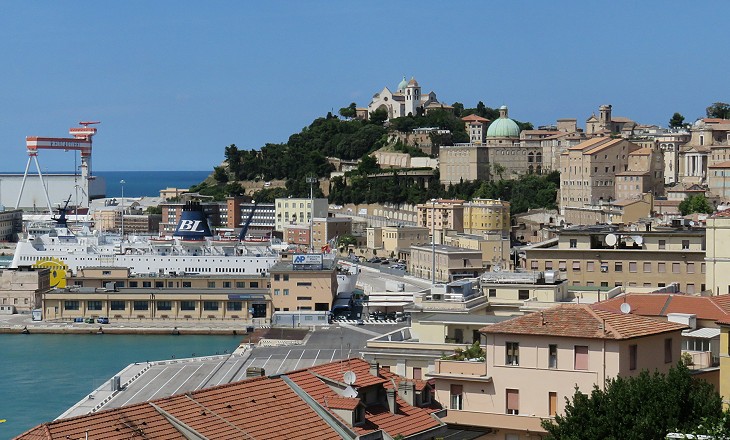