You may wish to read an introduction to this section first.
During the second half of the XVth century three events showed the importance acquired by Ancona:
a) in 1460 Thomas Palaeologus, the last Byzantine despot of Mistrà, landed at Ancona carrying the head of St. Andrew to avoid the precious relic falling into the hands of the Ottomans;
b) in 1464 Pope Pius II decided to personally lead a crusade to take back Constantinople; in June he went to Ancona where he waited for the arrival of troops and ships from Venice and Hungary. He passed away in August and the crusade was called off;
c) in 1492 Koca Mustafa Pacha, Master of Ceremonies of Sultan Beyazid II, landed at Ancona carrying the spear of St. Longinus, another important relic, a fragment of which was donated to Ancona. 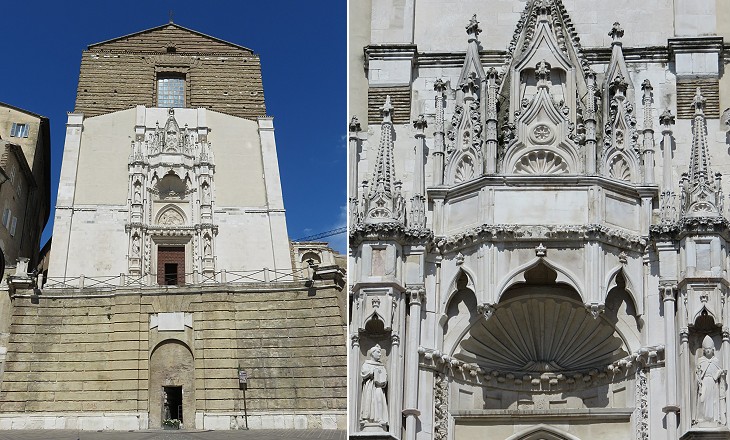 During that same period Ancona was embellished with new buildings or additions to existing ones, e.g. the grand portal the Franciscans commissioned Giorgio Orsini, a sculptor from Dalmatia. The design of the portal combines elements of Venetian Gothic style (pointed arches, spires) with Renaissance ones (niches decorated with shells). 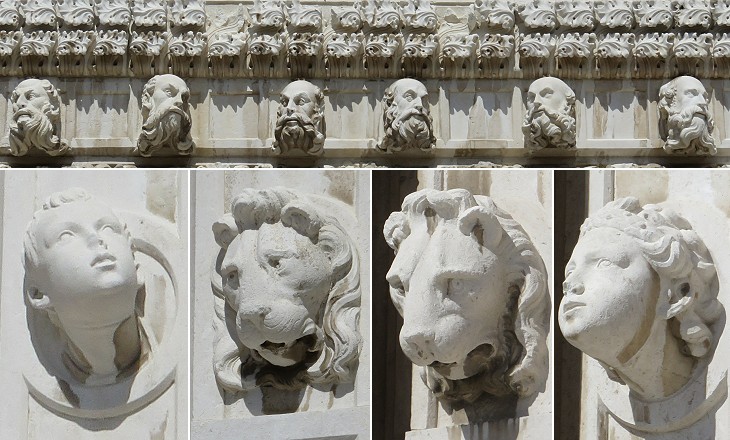 S. Francesco alle Scale: other details of the portal

When Orsini was assigned this portal he was involved in the design and decoration of the Cathedral of Sebenico, which is regarded as his masterpiece (hence he is also known as Giorgio da Sebenico). A series of portraits decorating the apse is the most striking feature of that Cathedral and a similar one can be seen in this portal. The heads of bearded saints are merely decorative, but those of boys and lions show great ingenuity of design and execution.

Loggia dei Mercanti (1451-1459): (left) façade; (right) statue portraying a knight, symbol of Ancona (a front view can be seen in the image used as background for this page); the keys of St. Peter, symbol of the Papal State, were added to the left of the knight in the XVIth century

Wealthy merchants of Ancona financed the construction of a building where they could meet among themselves or receive foreign delegations and guests. The building has two entrances: one towards the town and one towards the harbour (it is shown in another page). Orsini was commissioned to design the Loggia dei Mercanti and its decoration. Unfortunately the street where the building is located, similar to most historical streets of Ancona, is very narrow and the complex design of the façade is difficult to appreciate in its entirety.

The influence of Venetian Gothic style is very evident in the overall design of the building and in some of its decorative motifs, much less in the statues and in particular in those of the Knight and of Charity. This façade is the only part of the building which was not completely destroyed by a fire in 1556, but some of its aspects were modified during the restoration and the loggia which gives the name to the building was walled. 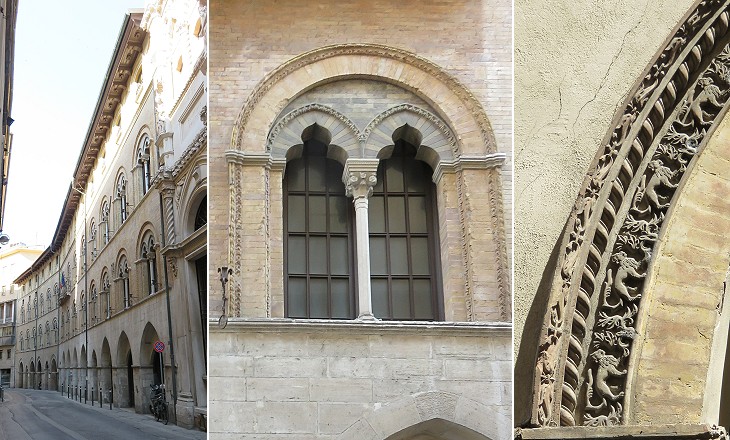 The involvement of Orsini in many undertakings at Ancona most likely began with the construction of a palace for the Benincasa, a wealthy family of merchants from Cagli. It is situated next to Loggia dei Mercanti. The Benincasa held important positions at Ancona including that of Bishop in 1484-1502. They gathered a large library which included XVth century portolani (nautical charts) drawn by a member of the family. It was donated to the City of Ancona in 1749 and the Library of the town is named after Luciano Benincasa.

The last monument designed by Orsini at Ancona was completed after his death in 1475. The design of the portal no longer includes a pointed arch, but it retains that rich decoration which can be observed in other of his works, e.g. the Chapel of St. Rainerio at Spalato. In some details of the statues of this portal, e.g. the sun on the breast of St. Nicholas of Tolentino, Orsini showed how well he mastered his chisel 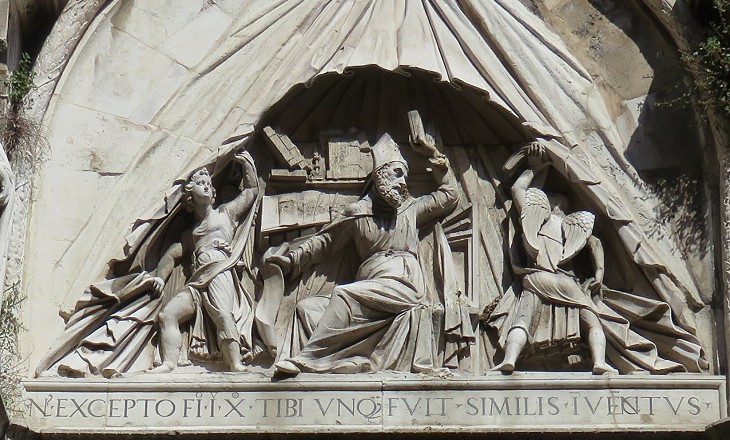 Portal of S. Agostino: St. Augustine destroying the books of the heretics helped by two angels by Giorgio Orsini

The scene depicted above is impressive for novelty of design and vigour of execution. Usually a miracle or another event of the life of a saint was not given such an important position in a portal, but was part of a series of wooden or bronze panels decorating the door. The care paid to depict the books on the shelves and the angel seen from the back make this relief almost unique for its time.
St. Augustine took hard stances towards Arians and Donatists and he supported the view that True Faith could be imposed by governmental coercion (Letter 93). 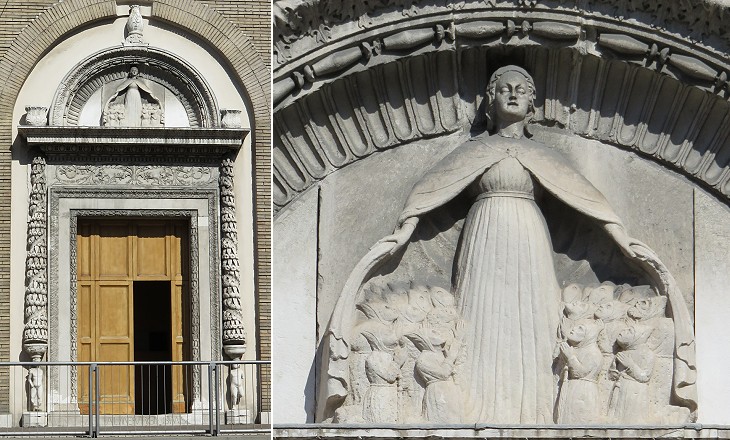 Marino di Marco Cedrino was a sculptor whose first known work is a 1460 Winged Lion at Ravenna, then a possession of the Republic of Venice. He regarded himself as a Venetian and his initial works were in line with the Gothic style of that city, but in this portal he departed from it to adopt Renaissance patterns. In the relief he depicted the Virgin Mary sheltering the members of a brotherhood with her cloak, a subject which was popular in Florence (see Madonna dei Trovatelli at Spedale degli Innocenti) and that can be seen also in Fermo. 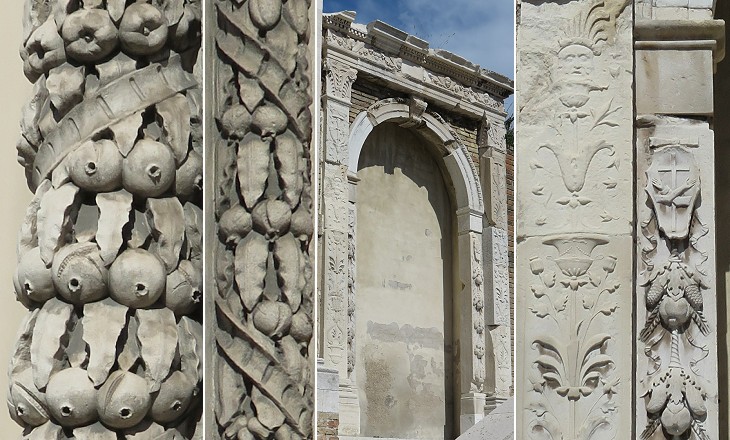 Giorgio Orsini mainly used leaf motifs to decorate his buildings, but towards the end of the XVth century other patterns prevailed. Fruits were believed to have a more symbolic religious content, in particular pomegranates, symbols of suffering and resurrection.
The discovery of Domus Aurea led many artists to decorate their works with patterns seen in the halls of that ancient monument. Candelabra, decorative motifs arranged as a sort of chandelier became very common in Rome and eventually throughout Italy. 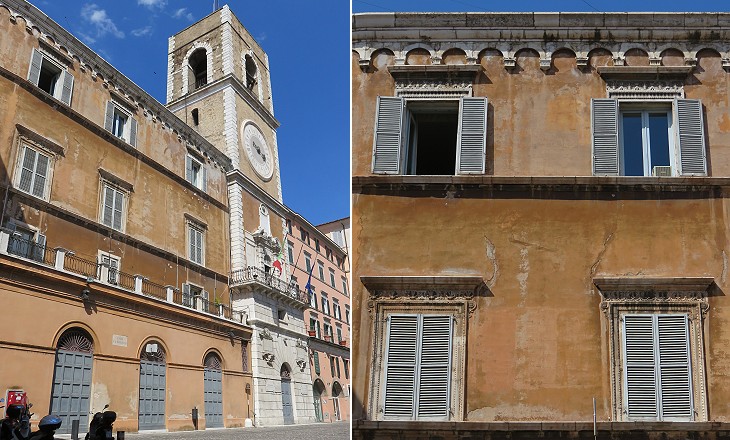 Medieval Ancona was perched on the Guasco hill where the Cathedral and the main buildings were situated. The growth of the town led to new developments at the foot of the hill and an existing building was enlarged by Pietro Amoroso, perhaps following a project by Francesco di Giorgio Martini, architect of Federico da Montefeltro, Duke of Urbino. In 1532 it became the residence of the Papal governors (hence its name). The tower was added at the end of the XVIth century. 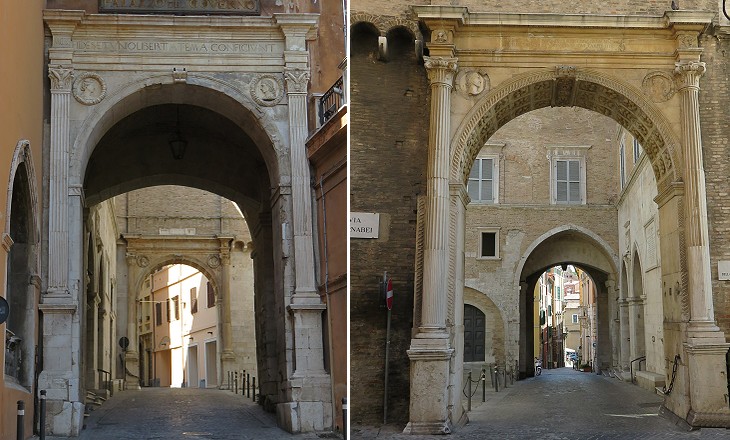 The early Renaissance character of Palazzo del Governo shows up in the two triumphal arches which were built across the street leading to the upper town. The inscription on the first arch says Fides et Unio Libertatem A(nconitanam) Conficiunt (Faith and Union make up the Freedom of Ancona). It is an indirect reference to rifts among the wealthiest families who competed for power and sought the help of Venice, of Hungary and of other foreign powers to achieve their goals. 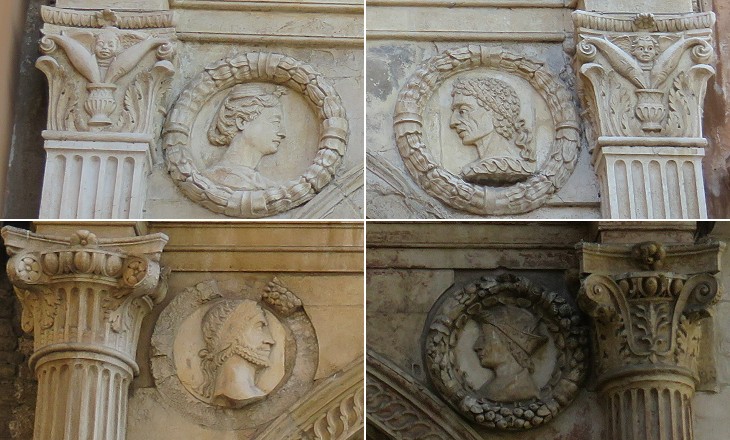 The arches were decorated with six circular reliefs portraying Emperor Trajan, his wife (Plotina), three other unidentified Roman emperors and an unidentified person of the time the arch was built. Because of the hat he vaguely resembles Byzantine Emperor John VIII Palaelogus, who most likely landed at Ancona in 1438 on his way to the Council of Ferrara.