On September 16, 1503 all the cardinals met for a very difficult conclave to appoint Pope Alexander VI's successor. Cesare Borgia, called il Valentino, son of the deceased pope was determined to influence the outcome of the conclave, but a bout of malaria kept him away from Rome; some cardinals supported Cardinal Giuliano della Rovere, nephew of Pope Sixtus IV and a fierce enemy of Alexander VI and of his ambitious son, but other cardinals had been favoured by the deceased pope and feared to lose their privileges.
Eventually on September 22, the cardinals, fearing a prolonged conclave would lead to increased external pressures, ended the stalemate and voted for Cardinal Francesco Todeschini Piccolomini, nephew of Pope Pius II (see a page on this pope), who for this reason called himself Pius III. During the controversial pontificate of Alexander VI, Cardinal Todeschini Piccolomini had preferred to stay away from Rome and devote himself to embellishing Siena, where he usually resided, and the family fief of Pienza.

He donated to the Cathedral of Siena the library of his uncle and he financed the construction of a hall, where the precious volumes would be displayed.
Ten large frescoes by Pinturicchio illustrate the most important events of the life of Pope Pius II. The thrust behind these paintings is not religious fervour: vivid colours, embroidered costumes, jewels, harnessed horses form a sort of glossy magazine portraying the Italian high society at the peak of the Renaissance.

Libreria Piccolomini: Pope Pius II calling for a crusade against the Ottomans at Ancona

Even in the most dramatic event of the life of Pope Pius II, the viewer is fascinated by the elegance of the costumes and by the different hats: he is likely to miss the Pope's finger pointed towards a man wearing a turban, indicating the crusade called by the Pope to retake Constantinople, which had been conquered by the Ottomans in 1453.

Libreria Piccolomini: ceiling (you may wish to see a page on the ceilings of Roman churches)

The ceiling is split by decorative motifs (including the Piccolomini moons) into small rectangular sections showing allegorical and mythological scenes. At the centre the five moons of the cardinal's coat of arms, but the inscription makes reference to him as a pope (PIO II PONT EX PIETATE - PIUS III PONT MAX (this library was dedicated) to Pope Pius II by the piety of Pope Pius III).

Grotesque is a decorative theme used by the Romans and rediscovered at the beginning of the XVIth century in the ruins of Nero's Domus Aurea. Because the ruins had the appearance of caves (It. grotta) the decorations were called grotesque. They show small figures of men and animals, foliage and amorini, often arranged to form a sort of chandelier (candelabra).

Cardinal Francesco was not the only Piccolomini who embellished Siena. His aunt Caterina, sister of Pope Pius II, commissioned to Bernardo Rossellino this palace, the design of which reminds the viewer of palaces in Florence, because of the use of bugnato.

Yet another Piccolomini, Geronimo, Bishop of Pienza, commissioned in 1519 to Baldassare Peruzzi the elegant portal of S. Spirito.

This palace (to be more precise this complex of Renaissance buildings) is commonly known by the sinister name of Palazzo dei Diavoli (Devils' Palace). It came into the possession of the Turchi - Piccolomini as stated by an inscription below the joint coats of arms of the two families. Over time the reference to the family was thought to be a reference to the Turks and this, coupled with the busts projecting from the upper floor, led to its new name.

Although not directly related to the Piccolomini, the upper part of the decoration of Cappella di Piazza by Antonio Federighi can be associated with them, because it was designed during the period of their highest influence on the political and cultural life of Siena. It contains a reference to Ancient Rome, as the gryphons of the frieze were modelled after those of Basilica Ulpia. 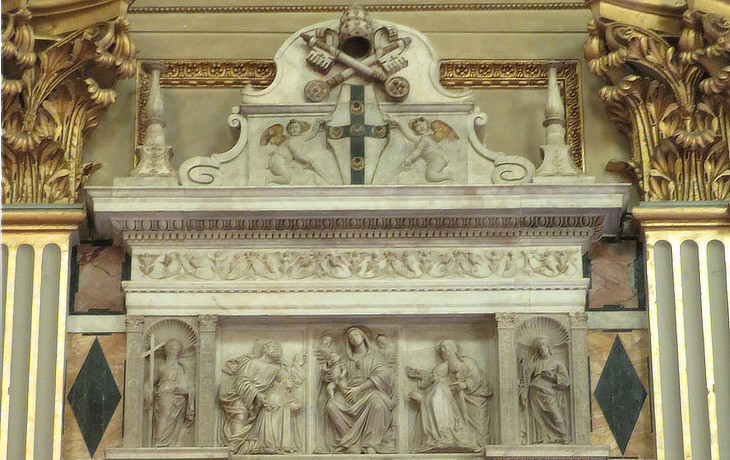 The cardinals had elected Francesco Todeschini Piccolomini as a pope of transition, knowing that his health was very poor, nevertheless they did not expect him not to be able to take part in the solemn procession to S. Giovanni in Laterano which concluded the coronation ceremonies. On October 18 Pope Pius III passed away: Rome did not see his moons, apart from those in his funerary monument.