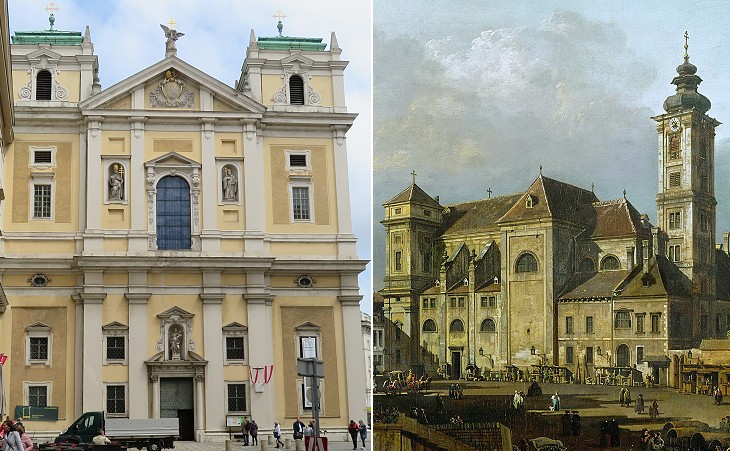 Schottenkirche: (left) façade; (right) Kunsthistorisches Museum: detail of a 1760 painting by Bernardo Bellotto which shows the side of the church and Freyung, a large and busy square; "Freyung" means asylum place, because Schottenkirche and the adjoining Benedictine monastery were granted this right

The number of Italian artists who worked in Vienna in the XVIIth century is quite impressive; the majority of them came from Northern Italy and in particular from Lombardy. The medieval Schottenkirche, named after the Scottish Benedictine monks who founded it, was largely modified in 1641-1648 by a team of five Italian architects including Andrea Allio and Silvestro Carlone. Members of the Allio and Carlone families were involved in the design and decoration of many churches and palaces in Vienna and other towns of Austria for more than a century. In particular Carlo Innocenzo Carlone had a major role in the decoration of Belvedere Palace and Donato Felice d'Allio in the design of Salesianerinnenkirche. 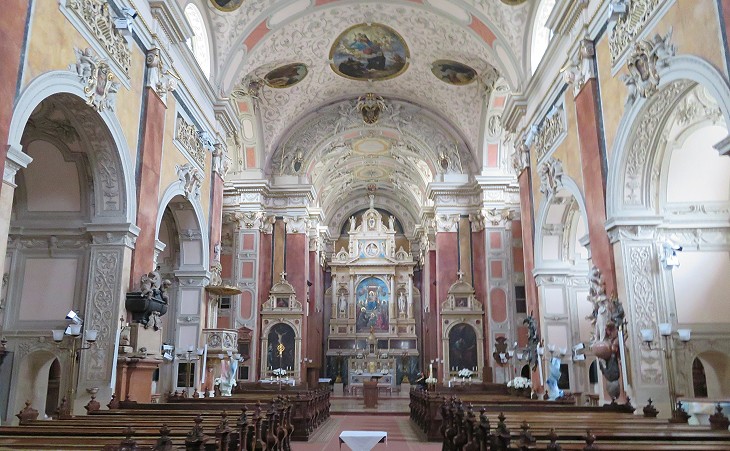 Schottenkirche: interior with some funerary monuments

In 1883-1887 the interior of Schottenkirche was modified and it partly lost its Baroque appearance, with many altars being replaced by Neo-Renaissance ones in line with the fashion of the time and new paintings on the ceiling.
The layout of the interior with one large nave is based on the model which was developed in Rome to facilitate the delivering of homilies from a high pulpit in churches belonging to a religious order, e.g. at S. Andrea della Valle. 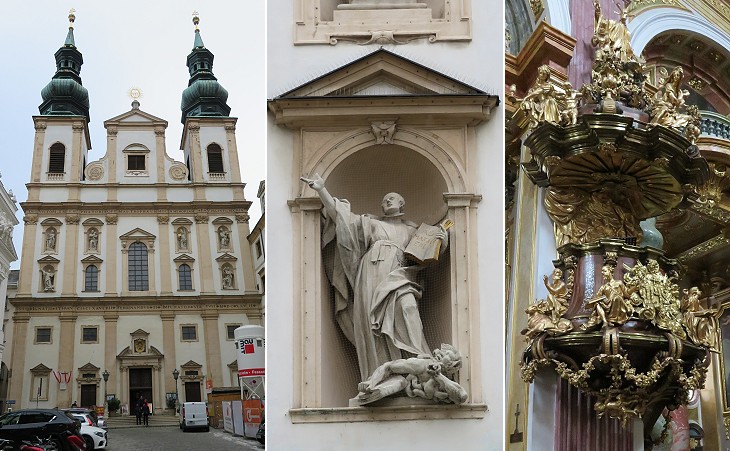 The preaching of the Catholic faith in a city which at one point had largely embraced the Lutheran Reform was led by the Jesuits, the spearhead of the Counter-Reformation effort. In 1556 Emperor Ferdinand I asked Pietro Canisio, Italianized name of Peter Kenijs, a Jesuit Dutch theologian, to develop a strategy to re-Catholicize Vienna. In 1623 the Jesuits were entrusted with teaching theology and philosophy at the University of Vienna and soon after they built a church next to it. The statues which decorate the church have many points in common with those on the façade of Chiesa del Gesù. The rich decoration of the interior is another link between the two churches. 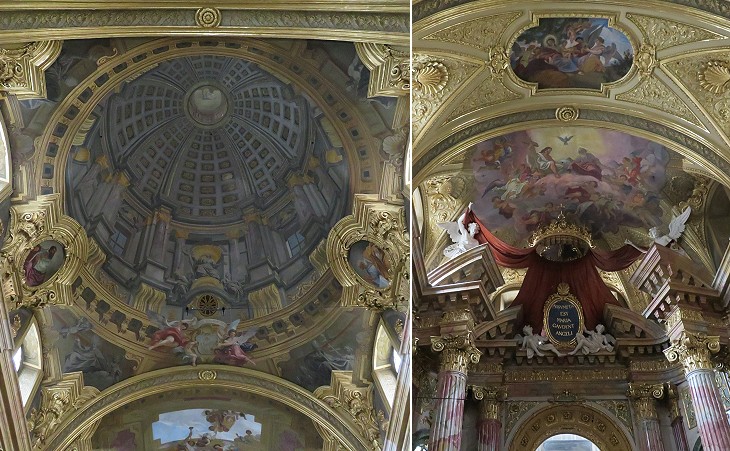 The Jesuit's church surpasses all the rest in beauty.
Thomas Nugent - The Grand Tour: A Journey Through the Netherlands, Germany, Italy and France - 1749
The church was in part redesigned in 1703-1717 by Andrea Pozzo, the Jesuit father who had become renowned for the ceiling he had painted in S. Ignazio in Rome in 1691-1694. He was asked to paint a copy of the fake-dome he had devised for S. Ignazio. He redesigned also the exterior, but the onion-shaped spires of the bell towers were added at a later period, similar to what occurred in many churches outside the walls. The Jesuits colleges are magnificent buildings: before one of them stands a column of copper upon a pedestal of white stone with the virgin Mary on the top. Nugent
Kirche 'Zu den neun Choren der Engel' is another church with a very distinctive Italian architecture which belonged to the Jesuits. It is located in Am Hof (Square of the Court), one of the largest squares of old Vienna on the site of ancient Roman buildings. 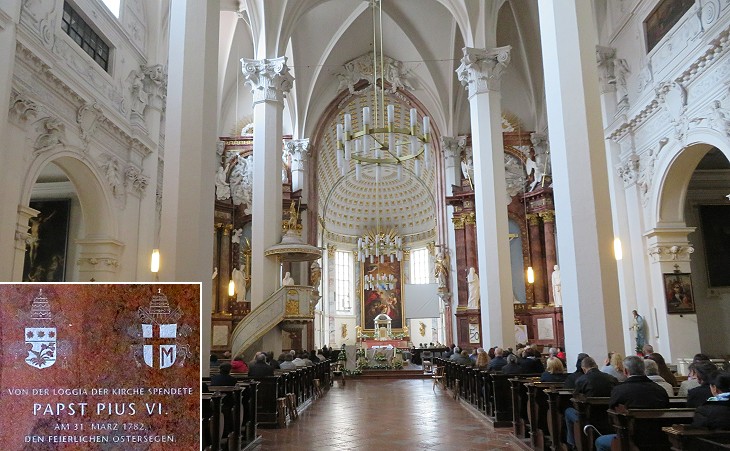 The interior retains some Gothic elements of the previous church which was modified after a fire in 1607. The design of the façade in 1662 is attributed to Giovanni Battista Carlone; its balcony was used to make important announcements: Pope Pius VI visited Vienna in 1782 in an attempt to convince Emperor Joseph II not to go ahead with his religious reforms: on Easter Day he gave the papal blessing to an enormous crowd from the balcony of this church. In 1806 the end of the Holy Roman Empire was announced from the balcony. In September 1983 Pope John Paul II visited Vienna to celebrate the 300th Anniversary of the end of the Siege of Vienna and he met here with Austrian workers and guest workers. For this meeting, a stage was built in front of the church to ensure that all believers would be able to see the Pope. 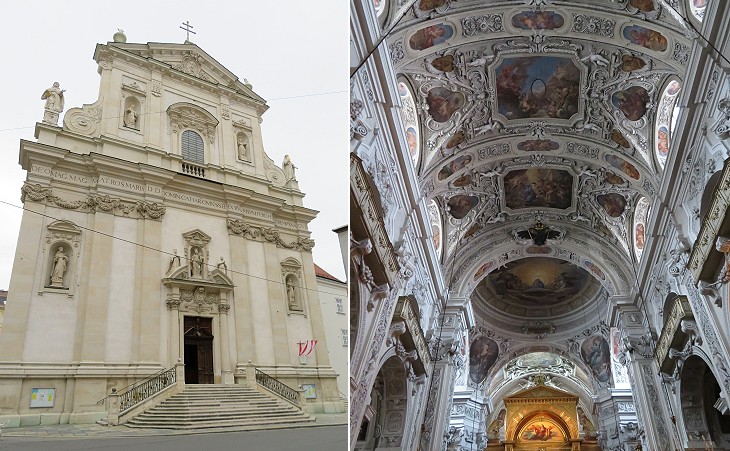 The Dominicans were another order involved in the Counter-Reformation effort. Their church has a definitely Italian appearance. It was built in 1631-1634 on the site of a previous one and very near the eastern section of the city walls. The façade was added in 1674; it greatly resembles those of Jesuit churches which were built in France following Italian patterns. You may wish to see SS. Domenico e Sisto, the church of a Dominican nunnery in Rome which was built approximately at the same time as Dominikanerkirche. 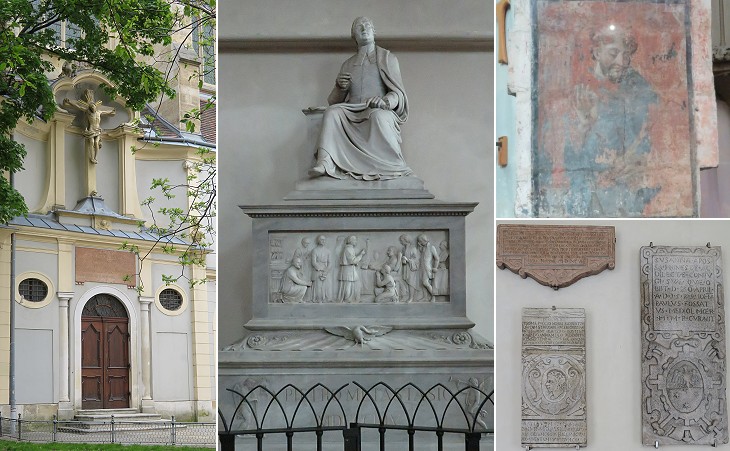 Joseph administered such violent medicines and Leopold, during his brief reign, was so unwilling to administer restoratives, that the monkish institutions of the empire, reduced to a skeleton, were rapidly approaching their dying hour; his present majesty (Francis I), himself a most devout, and unaffectedly devout man, mounted the throne and they have recovered much of their monastic corpulence.
John Russell - A Tour in Germany, and Some of the Southern Provinces of the Austrian Empire - 1825
Emperor Joseph II closed many convents, including some of the Franciscans (aka Minorites). In 1786 one of their churches was assigned to the Italian community who already gathered there in Katharinenkapelle a separate chapel. The image used as background for this page shows a relief in this church which is attributed to Bernardo Rossellino, a Florentine sculptor.