Cardinal Giovan Angelo Braschi was elected pope on February 15, 1775 at the age of 58. He was confronted with the great changes induced by the Enlightenment in the European society and he had to face the initiatives of many monarchs, in particular the Austrian Emperor Joseph II, aimed at establishing their supremacy in matters such as the appointment of bishops and the definition of their dioceses. In 1782 Pius VI went to Vienna to try to convince Joseph II to reconsider some of the laws he had implemented. The visit was reciprocated by the Emperor in Rome in the next year but, apart from establishing good personal relationships, the initiative of the Pope had little success.
He was a tall man and he had a virile aspect. J. W. Goethe was impressed by these aspects when he saw a celebration chaired by him in Palazzo del Quirinale in 1786 and when he attended the ceremonies for the Holy Week in S. Pietro in 1788.
Pius VI embarked on a large effort to reclaim the Pontine Marshes between the Volsci Mountains and the sea. He enlarged Terracina and visited the area several times. The cost was enormous for the strained finances of the State and the Pope was criticized for this initiative, also because the reclaimed land was mainly assigned to his relatives.

(left) Sacrestia di S. Pietro: marble inlay with the motto of Pius VI and lilies one of his heraldic symbols; (right) fresco in Casino di Belvedere showing the sacristy

Another initiative which turned out to be very expensive was the construction of a new sacristy for S. Pietro. The very large building is full of references to him. His coat of arms showed three stars and below them some white lilies withstanding the effects of a strong wind; his motto was Floret in domo domini (it blossoms in the house of God).
The wind of the French Revolution however proved to be too strong for Pius VI's lilies. His life turned into a tragedy in 1796 when Napoleon invaded the northern provinces of the State of the Church. In June 1796 a truce was signed in Bologna with the loss of Bologna and Ferrara. The Pope joined a coalition against the French Republic in an attempt to regain these towns but the allied armies were defeated and with the Peace of Tolentino in February 1797 the loss of the northern provinces was confirmed and a very high compensation in gold, silver and works of art had to be paid to the French Republic. In addition French troops were stationed in several locations of the State of the Church. In February 1798 the French occupied Rome and declared the end of the State of the Church. Pius VI was taken prisoner and transferred to Florence, Turin, Briançon, Grenoble and eventually Valence where he died on August 29, 1799. He had been pope for 24 years and 8 months: according to a tradition no pope was expected to reign longer than St Peter who had been pope for 25 years (the tradition turned false when Pope Pius IX reached nearly 32 years in office). 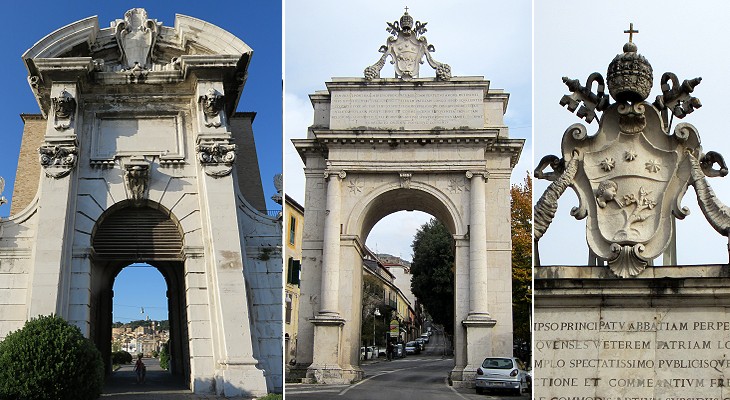 Pius VI wanted to emulate the popes of the Renaissance and of the XVIIth century by promoting public works to be marked with his coat of arms. In 1787-1789 Carlo Marchionni, his preferred architect, erected in his honour a large gate at Ancona, which is still known as Porta Pia, although during the French occupation the coat of arms of the Pope was erased and the gate was called Porta Francia. The gate of Ancona follows a baroque pattern while a sort of triumphal arch erected at the same time to celebrate a papal visit to Subiaco is definitely neoclassical (the coat of arms however is baroque). Another gate with the coat of arms of Pius VI is at Valentano. 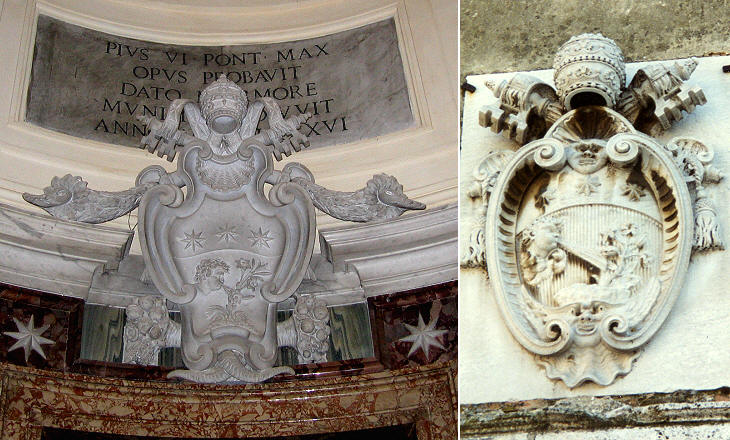 The coats of arms of Pius VI were erased almost everywhere. The French saw them as a symbol of the ancien régime and thought they were void of any historical or artistic values. Some of the coats of arms were put back in place after 1815 when Pope Pius VII regained control of the State of the Church. Cesena, the town where Pius VI was born, became again proud of him and his gigantic statue returned to its place.
The coats of arms inside the churches or in small towns where the revolutionary ideas had fewer followers had better luck. 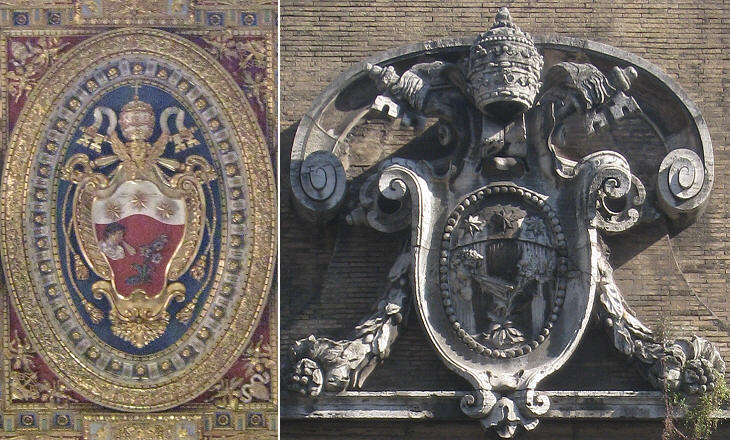 Coats of arms in the ceiling of S. Giovanni in Laterano (left) and near Porta del Popolo (right)

The coats of arms of Pius VI disappeared from the streets of Rome during the French occupation. Palazzo Braschi, a large palace built by the nephew of the Pope was confiscated and the coat of arms of Pius VI was taken away and the same occurred to a gigantic coat of arms in Ospedale di S. Spirito. These coats of arms were not destroyed and they were put back in place after 1815. Pius VI erected three obelisks: in Piazza del Quirinale, in Piazza di Montecitorio and in front of SS. Trinità dei Monti. The obelisk in Piazza di Montecitorio is topped by a globe with a relief showing the wind blowing on the lilies.

S. Pietro: (left) coats of arms at the entrance to the tomb of St. Peter; (right) detail of an altar

Pius VI in addition to the new sacristy, made some other improvements to S. Pietro. His coats of arms are at the entrance to the tomb of St. Peter. His heraldic symbols can be seen in the clocks of the façade and also in several altars.

Coats of arms in Museo Pio-Clementino (1)

The relatively low number of coats of arms of Pius VI in the streets of Rome is compensated by the enormous amount of his coats of arms which decorate Museo Pio-Clementino. Pius VI assisted his predecessor Clement XIV in the development of a museum for the papal collections of ancient statues. Once Pope he largely increased the initial design of the museum, which is now named after him and his predecessor. The coats of arms follow the pattern designed by Gian Lorenzo Bernini. The change from Baroque and Neoclassicism is more evident in the decoration and in the paintings. The theme of the wind blowing on the lilies is used to decorate staircases, gates (see the background of this page), ceilings and walls. 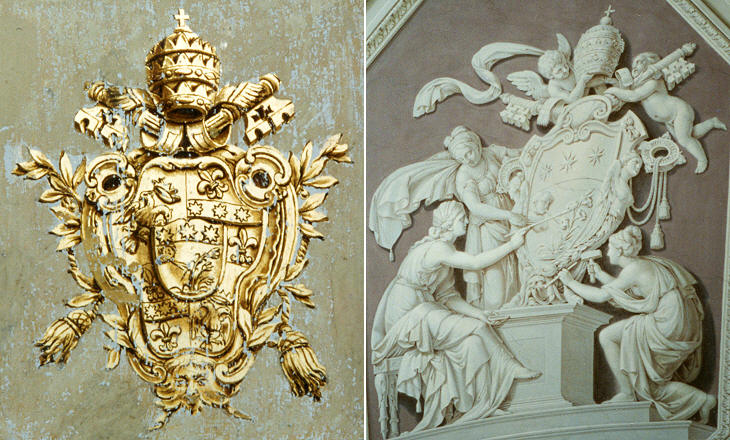 Coats of arms in Museo Pio-Clementino (2)