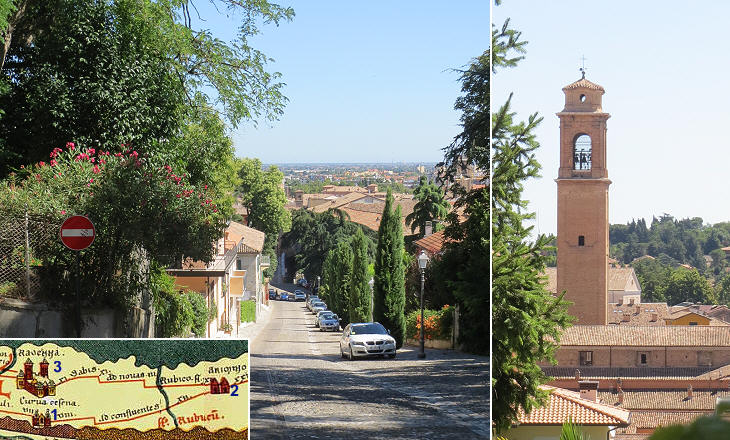 In 189-187 BC the Romans built Via Aemilia, a road which crossed the region to the north of the Apennines from Ariminum to Placentia (Piacenza) on the River Po in a straight line (Roman roads were usually named after the consuls who built them). The road eventually gave its name to the region it crossed. It ran in the plain, but very close to the foot of the Apennines, so that the towns founded by the Romans along Via Aemilia included a small hill which could be fortified.
Colle Garampo, today a quiet neighbourhood of Cesena with a few expensive houses enjoying a commanding view over the town, is a small hill where evidence has been found of Roman fortifications. Cesena does not retain monuments of that period, but its countryside is still parcelled according to centuriatio, the land division system introduced by the Romans to distribute a territory among army veterans. 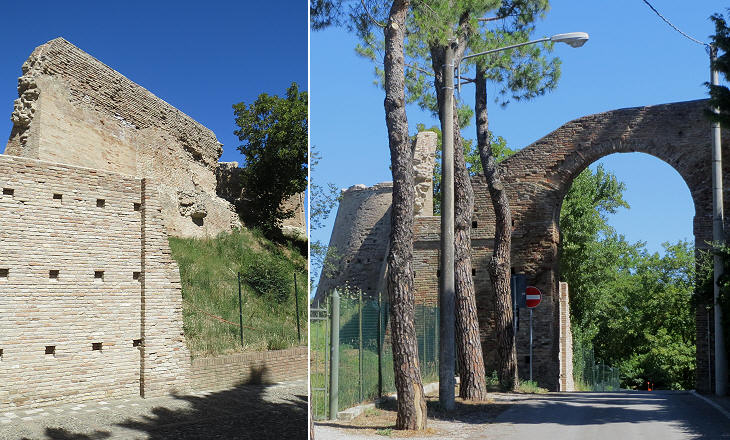 (left) Old fortress at the top of the hill; (right) Porta Montanara which was opened in its walls

In 568 AD the unity of Italy was broken by its being split between Longobards and Byzantines. Cesena was ruled by the latter until 751 when they were ousted from northern Italy. In the late XIIth century the inhabitants managed to establish a Comune, a city-state. Monuments of the Comune period of Cesena were erased in 1377 by the sack of the town and the massacre of its inhabitants ordered by Cardinal Robert of Geneva. He became known as the Butcher of Cesena, yet in the following year the French cardinals elected him Pope Clement VII.

The re-establishment of Cesena, as well as that of Senigallia is merited to the Malatesta, a powerful family of Rimini, to whom the town was assigned as Vicars of the Pope. They called back the inhabitants who had abandoned it and started to rebuild new fortifications on Colle Garampo. The fortress was completed in the XVth century by Matteo Nuti, an architect who had worked for the Malatesta in Fano. For the height of its walls and its being in a commanding position the fortress was called Falcone di Romagna (Falcon of Romagna, the region around Ravenna, which is so named because it remained a Roman/Byzantine territory until 751). 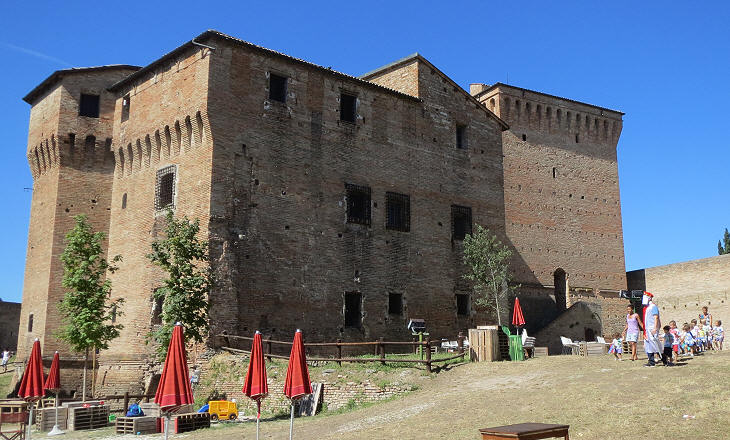 A last resistance inside the fortress was entrusted to two separate keeps, which are called Il Maschio e la Femmina (the Man and the Woman). In the XIXth century the military effectiveness of the fortress declined and it was turned into a prison until 1969. Eventually it was acquired by the municipality of Cesena and after extensive restoration it now houses a small museum and in summer it becomes a playground for children.

Sigismondo Pandolfo Malatesta has linked his name to Tempio Malatestiano at Rimini, his brother Malatesta Novello, who ruled Cesena in 1429-1465, to the foundation of Biblioteca Malatestiana, the first public library in Italy. It was built inside a Franciscan convent, but all citizens could access it. It was designed by Matteo Nuti and it consists of a large hall divided into three naves. 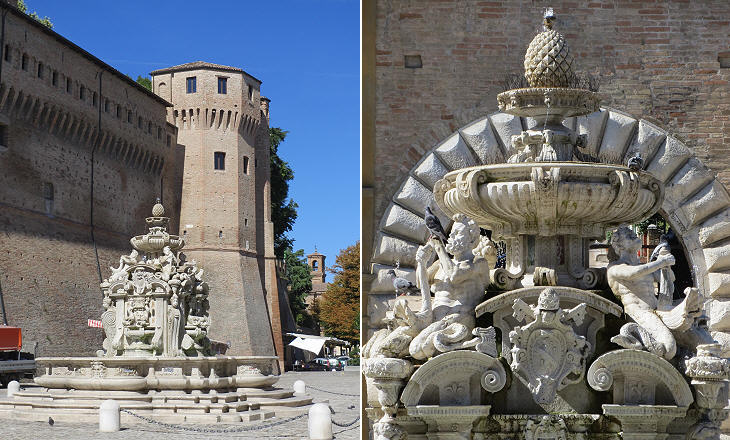 Malatesta Novello died in 1465 without heirs because of a vow of chastity taken by his wife Violante da Montefeltro, sister of Federico, Duke of Urbino. Cesena became a direct possession of the Popes, with the exception of a short period in 1500-1503 during which it was the capital of an ephemeral state founded by Cesare Borgia, son of Pope Alexander VI. According to tradition Malatesta Novello had in mind to build a fountain in the main square of Cesena, but this actually occurred only at the end of the XVIth century during the pontificate of Pope Sixtus V, who cared about providing Rome and other towns of the Papal State with fountains (you may wish to see Fontana dell'Acqua Felice). 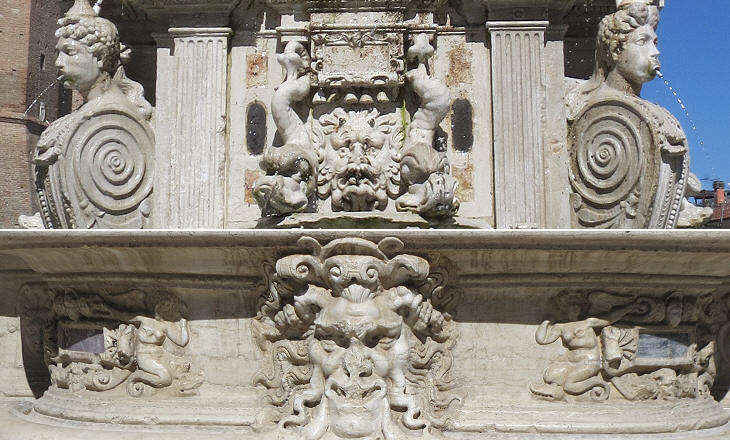 The fountain is a perfect example of what art historians call "Late Renaissance horror vacui" (fear of empty space) which led to filling with decoration all the surfaces of a building or in this case of a fountain. The citizens of Cesena were very proud of their fountain. According to a tale they cut off the hands of Francesco Masini (who designed the fountain), so that he could not design another one elsewhere. The image used as background for this page shows another detail of the fountain.

The architecture of the churches of Cesena is characterized by the use of bricks. Although the town is close to the Apennines where the frequency of devastating earthquakes is high, the tall and carefully built bell towers of Cesena have withstood their effects. 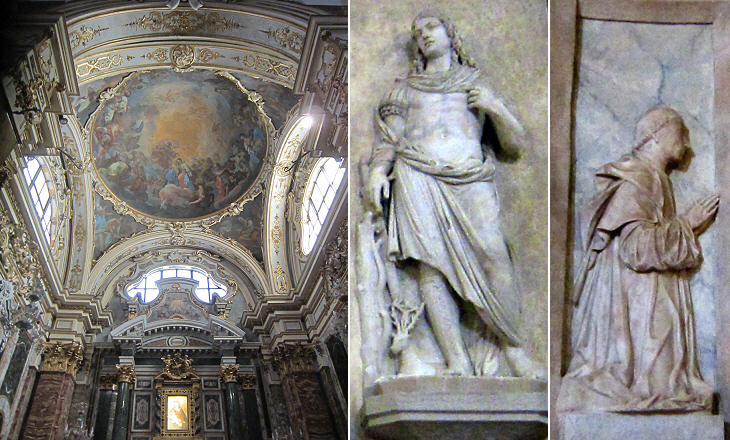 While the façades and portals of most churches of Cesena are rather plain, the interiors are often very rich. Prior to 1377 the Cathedral was located on the hill. The Malatesta rebuilt it in the plain and the Bregno brothers, sculptors from Venice, decorated some of its chapels. In 1746-1750 a chapel was sumptuously decorated to house a miraculous image. The ceiling was painted by Corrado Giaquinto, who spent many years in Rome (see his ceiling in S. Nicola dei Lorenesi), Turin and Madrid.

Similar to other towns of the Papal State, Cesena had many churches founded by brotherhoods. In recent times Pope John Paul II and Pope Benedict XVI have referred to Purgatory as a spiritual endurance for having failed to respond to the love of God, rather than as an actual location where souls are punished, as described by Dante in the Divine Comedy. Santa Maria del Suffragio belonged to a brotherhood whose members gathered there to pray for the souls in Purgatory in order to shorten their suffering (you may wish to see how souls in Purgatory were portrayed on Malta). The rich decoration of the church indicates that the brotherhood could rely on wealthy donors. 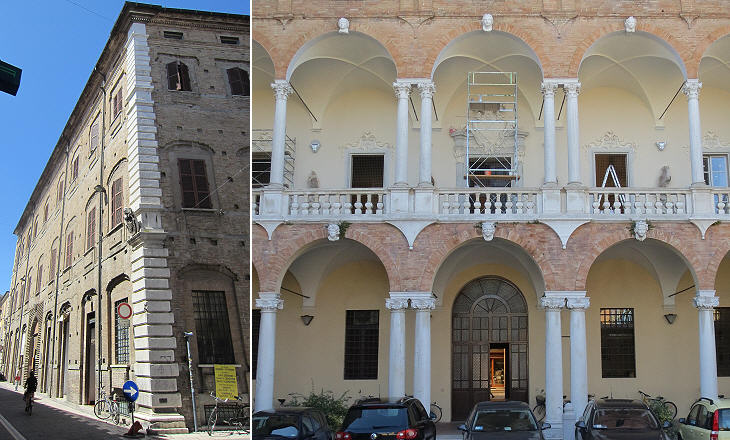 In February 1775 Cesena was a sleepy provincial town when great news came from Rome: Cardinal Giovanni Angelo Braschi from Cesena had been elected Pope. He chose to call himself Pius VI, perhaps because of a distant relationship with the family of Pope Pius V. The news came as a surprise because Braschi was relatively young (58), had been appointed cardinal only two years before and he had never been a bishop. The conclave lasted five months and probably more creditable candidates were vetoed by the great European powers.
The Ghini, owners of the largest palace in Cesena, asked for permission to place the Pope's coat of arms at its corners. The huge building was erected at the end of the XVIIth century. The brick façade has holes which suggest it was planned to decorate the building with pietra d'Istria, a white stone from Istria, a peninsula in the Adriatic Sea which belonged to Venice. Eventually only the corners were decorated. 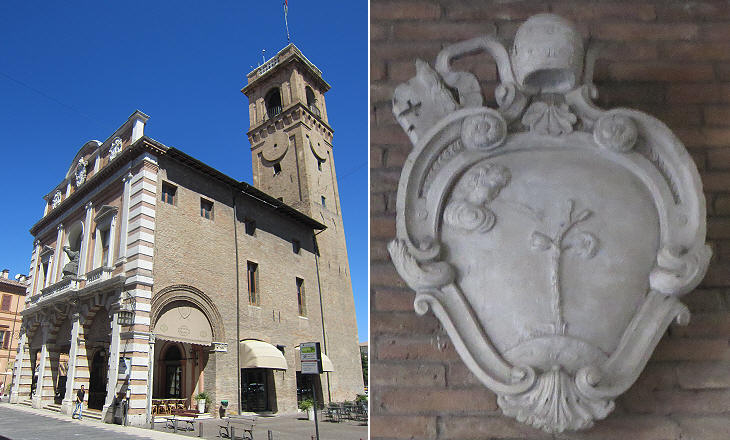 The noblemen of Cesena who used to meet at Palazzo del Ridotto, a small XVth century building in the centre of the town, decided to place a large bronze statue of Pope Pius VI in a purposely built grand niche. The statue was spared by the French when they occupied Cesena in 1797 and you can see it in a page dedicated to the symbols of the Popes which survived the French Revolution. The last years of Pope Pius VI were very difficult. He was eventually taken prisoner and brought to France where he died in 1799. One of the elements of his coat of arms was a metaphor of his life: the Wind (of the Revolution) was too Strong for Him.