You may wish to see a page with an introduction to this section first. 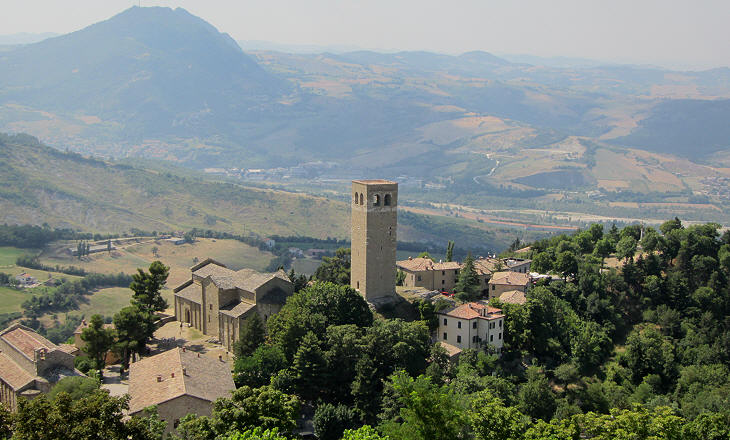 San Leo is situated on a mountain on the eastern side of the River Marecchia valley, which since antiquity housed a track and eventually a road across the Apennines. The Romans built a temple to Jupiter Feretrius on the site of the Cathedral of San Leo to celebrate their victory over the Gauls at Clastidium (Casteggio) in 222 BC which allowed them to conquer Milan. Feretrius most likely meant He who hits (the enemy) and Consul Marcus Claudius Marcellus, the Roman commander at Clastidium, donated the spolia opima (armour and clothes) of Viridomarus, the leader of the Gauls, to the temple.
Montefeltro, the name of the mountainous region covered in this section, is believed to derive from Mons (of Jupiter) Feretrius. 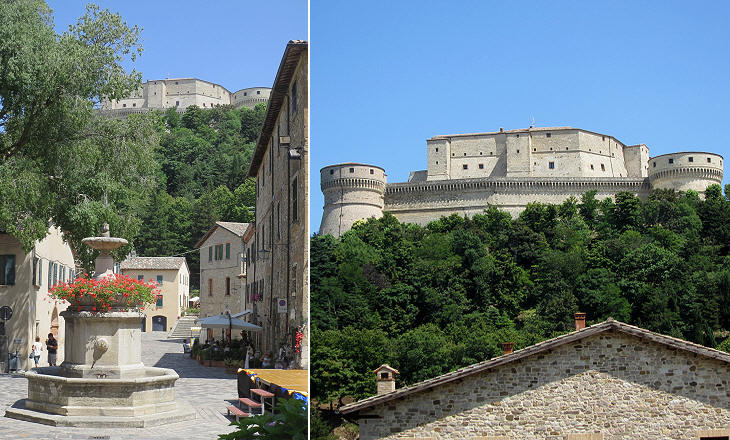 Views of the fortress from the town

Today San Leo is best known for the imposing fortress which was built at the top of the mountain in the XVth century, but the very tiny town, a handful of buildings, had a great importance from a religious viewpoint because it was the bishopric see of the whole of Montefeltro since the VIIth century. Today the diocese includes the territory of the Republic of San Marino and it has three cathedrals (in San Leo, in San Marino and in Pennabilli, in the upper Marecchia valley). 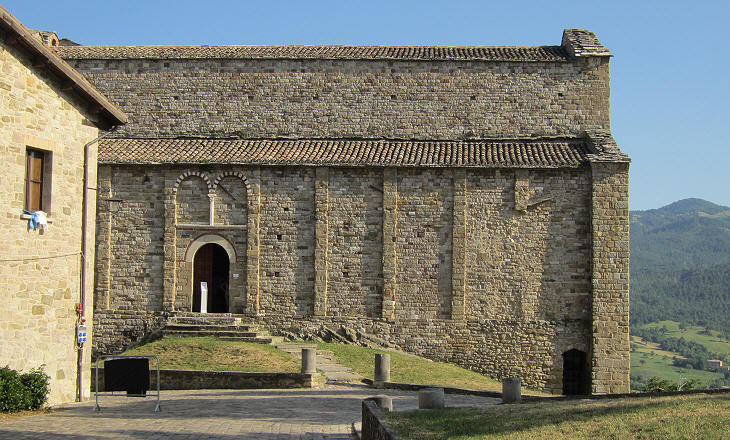 Today this church, the Cathedral and the bell tower are isolated, but in the Middle Ages they were part of a quarter which included other religious buildings such as the Bishop's Palace, a house for the canons and hostels for pilgrims. Pieve di S. Maria Assunta is the oldest church of the town because its construction was started in the early IVth century by Saint Leo, a stone cutter from Dalmatia, who founded the first Christian community in the region. In 882 the original church was incorporated into a larger one, which eventually collapsed because of an earthquake and was rebuilt in the XIth century. 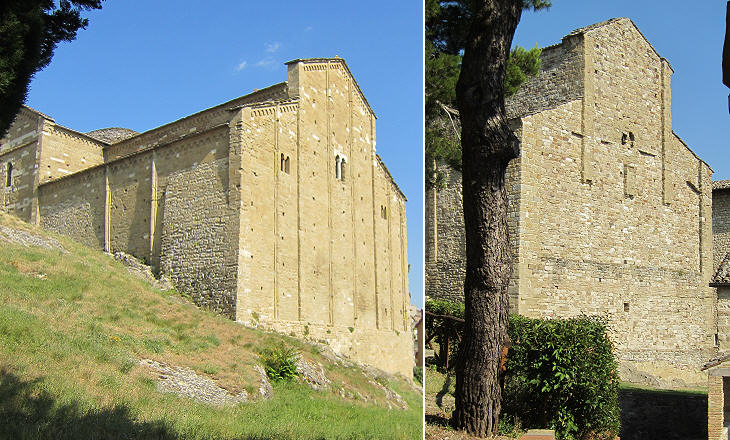 Façades of the Cathedral (left) and of the Pieve (right)

Both churches have side entrances because their façades are on the edge of a precipice. The masons (probably from Lombardy) did their best to decorate the façades, in particular that of the Cathedral, even though they could only be seen by locations down in the valley. 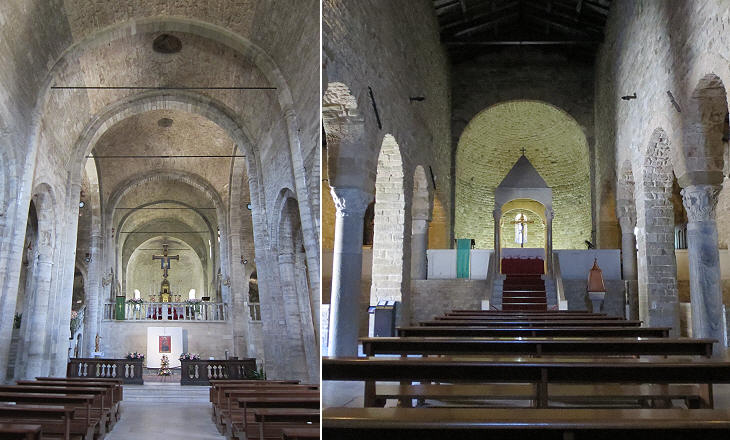 Interiors of the Cathedral (left) and of the Pieve (right)

Both churches have small crypts which are the oldest parts of the buildings and main altars placed above them. Some ancient columns, perhaps from the Temple to Jupiter Feretrius were employed for the XIth/XIIth centuries reconstructions. Starting from the XVth century many bishops were unhappy about actually residing in San Leo, and in general they lived in Pennabilli where they built another Cathedral. As a consequence the churches of San Leo have retained their medieval aspect (some minor additions have been removed). 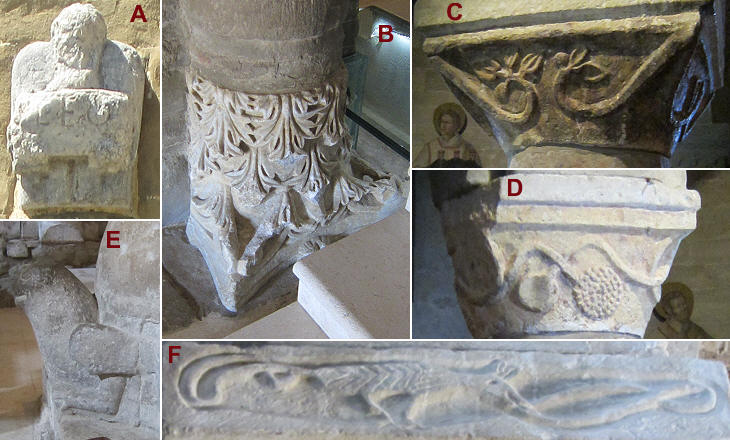 The Cathedral is a sort of museum of medieval art. Some of the small reliefs which decorate it belong to the earlier church and were utilized in the XIIth century reconstruction in a haphazard manner, as well as ancient capitals. 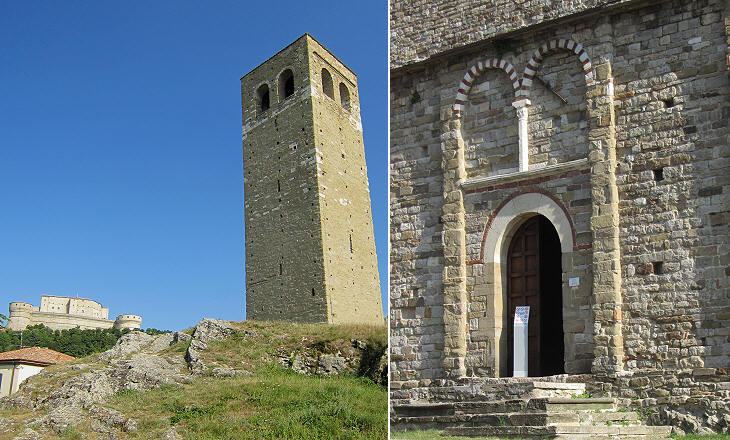 (left) XIIth century bell tower of the Cathedral; (right) entrance to the Pieve

In the XIIth century members of the Counts of Carpegna family (Carpegna is the main mountain of Montefeltro) established themselves in San Leo and held important positions in the town government. In 1226 they were given Urbino by Emperor Frederick II and they moved there and became known as da Montefeltro, because of their land of origin.
San Leo became an independent city-state until 1359 when Cardinal Albornoz restored papal authority over the region. 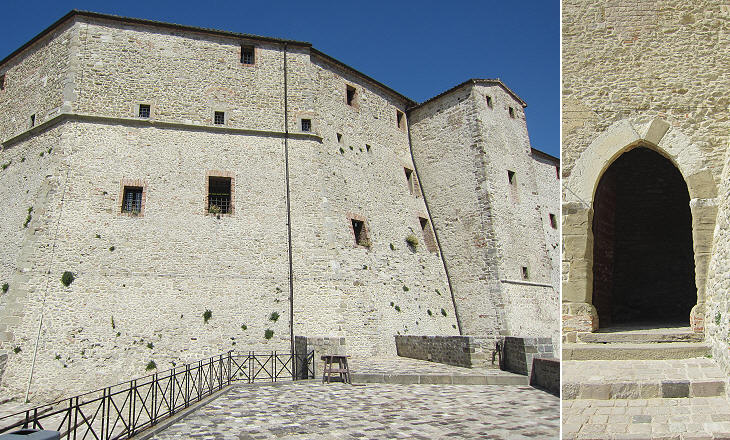 In the late XIVth century, a period of great political confusion, the Malatesta, a family who ruled over Rimini and other towns, acquired San Leo and strengthened its medieval castle by adding square towers to it.
In 1441 the da Montefeltro managed to seize the castle and the town, by simulating an attack on the latter which made the garrison of the former abandon its positions. The attack on the castle was led by Federico da Montefeltro who was nineteen-year-old. 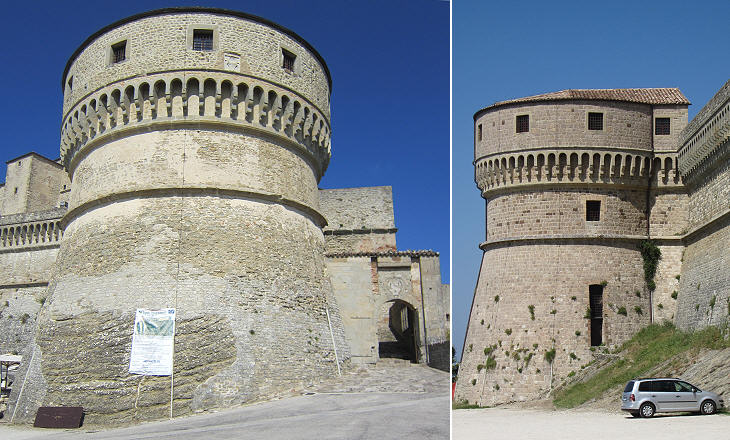 Towers designed by Francesco di Giorgio Martini: the smaller one was rebuilt in the late XVIIIth century after it collapsed because of an earthquake

In ca 1475 Federico da Montefeltro commissioned Francesco di Giorgio Martini, an architect from Siena who extensively worked in Urbino, the strengthening of San Leo to upgrade it to the requirements of cannon warfare. The architect is regarded as the founder of modern military architecture together with Antonio da Sangallo the Elder (you may wish to see the fortress the latter built in Nettuno).
In San Leo he designed two imposing round bastions which could withstand the impact of guns and which by projecting from the walls allowed the defenders to fire on the assailants from a side position (flanking or enfilade fire). 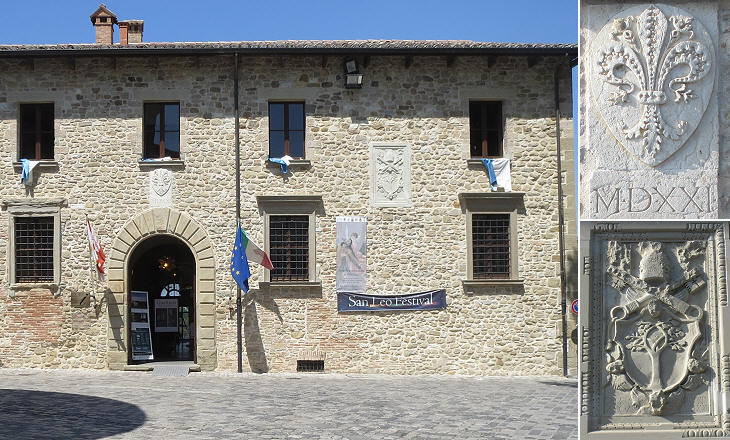 Between 1497 and 1521 three popes (Alexander VI Borgia, Julius II della Rovere and Leo X Medici) tried to turn Montefeltro and San Leo into a fiefdom for their relatives. Eventually the della Rovere succeeded, but only because Francesco Maria I della Rovere was adopted as heir by Guidobaldo da Montefeltro, the last of his family. In 1516 the Florentines conquered the fortress of San Leo and the event was regarded as such a military achievement that in 1557 it was celebrated by Giorgio Vasari in a large fresco in Palazzo Vecchio in a hall dedicated to Pope Leo X. 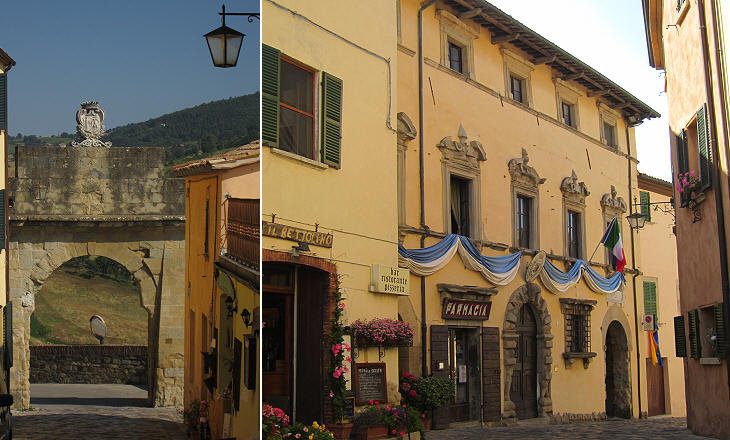 Francesco Maria II della Rovere, the last Duke of Urbino, used to visit the towns of his small state every year and to this purpose he built a small, yet elegant palace where he could stay when in San Leo. The building is now used as the Town Hall. It is situated along the main street of the town which from the only gate reaches Palazzo del Governatore and the Cathedral. 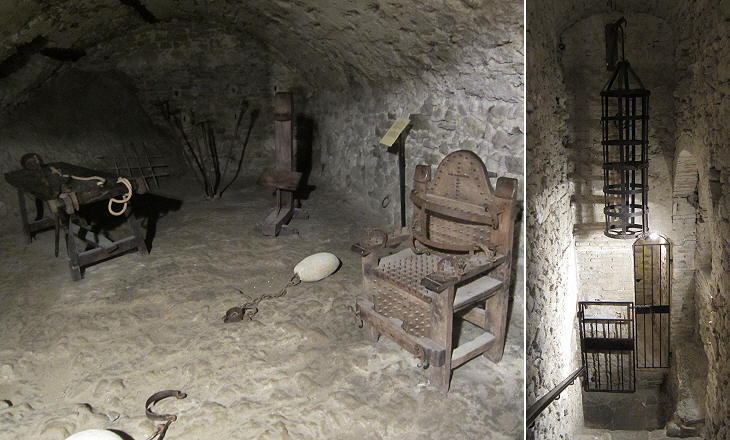 In 1631 the Duchy of Urbino came to an end and was absorbed into the Papal State. In the new political set up the fortress of San Leo lost its military importance and was used as a prison. The inmates were kept in dungeons until the late XVIIIth century when more human cells were built. The fortress houses a small museum of instruments of torture which shows the depth of cruelty men can reach. In March 2000 Pope John Paul II apologized for the sins made by Catholics in the name of the true faith.
The image used as background for this page shows a slit for guns in the main tower.