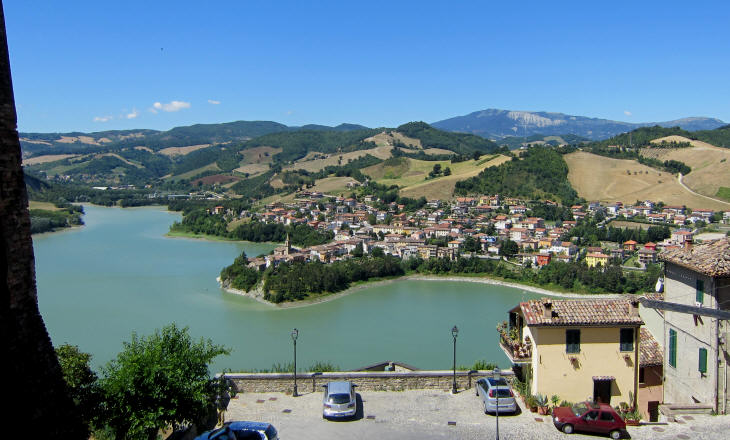 Sassocorvaro is situated in the centre of Montefeltro, a mountainous region in the north-eastern part of the Italian peninsula. It was a strategic location to control the valley of the River Foglia which empties into the Adriatic Sea at Pesaro and which forms a small (modern) artificial lake at the foot of Sassocorvaro.
The origin of the name of the small town is unknown: sasso (big stone) is a reference to the steep hill upon which it is situated; corvaro has the same root of corvo (raven) which gives the name a sinister sound. 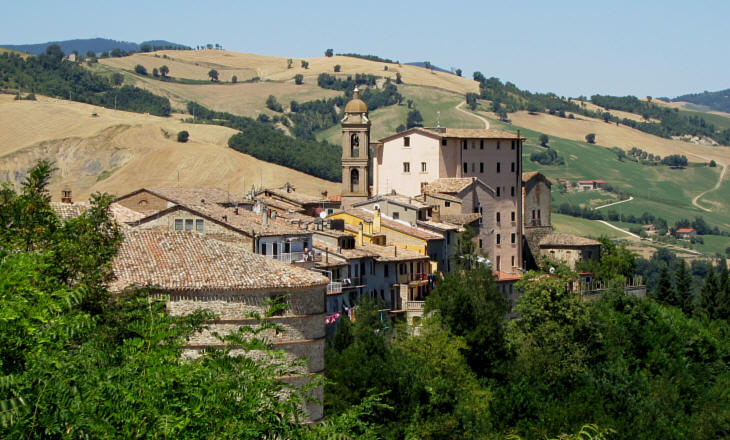 The small town is made up of a series of houses along the main street at the top of a ridge which can only be accessed from the south-west. Ancient chronicles indicate that the site was fortified in ca year 1000 and that eventually the settlement became a fiefdom of the Brancaleoni, who possessed several towns and castles around Urbino, e.g. Castel Durante. In 1437 Gentile Brancaleoni, the last of her family, married Federico da Montefeltro and her dowry included Sassocorvaro which was then added to the Duchy of Urbino. 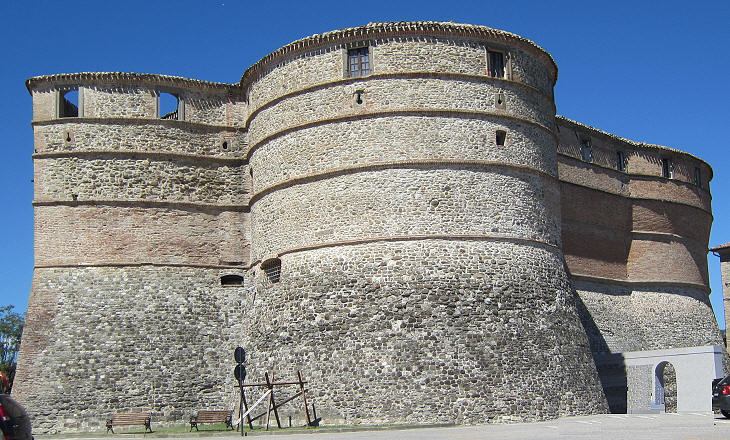 In 1462 Federico da Montefeltro led an expedition promoted by Pope Pius II against Sigismondo Pandolfo Malatesta of Rimini and he defeated him near Senigallia. In the following year he laid siege to Fano and he seized the town by making use of cannon (the upper part of Arco di Augusto, an ancient Roman gate was destroyed). When the war ended he was rewarded with some of the Malatesta's possessions.
Federico da Montefeltro realized that the medieval fortresses and town walls of his small state needed to be upgraded to withstand the impact of stone balls thrown by large size guns. He entrusted a major program of new fortifications to Francesco di Giorgio Martini from Siena, an expert in gunpowder whom he had employed in his army.
Sassocorvaro, which is just eight miles north-west of Urbino, was one of the first medieval fortresses which were redesigned by Francesco di Giorgio Martini. 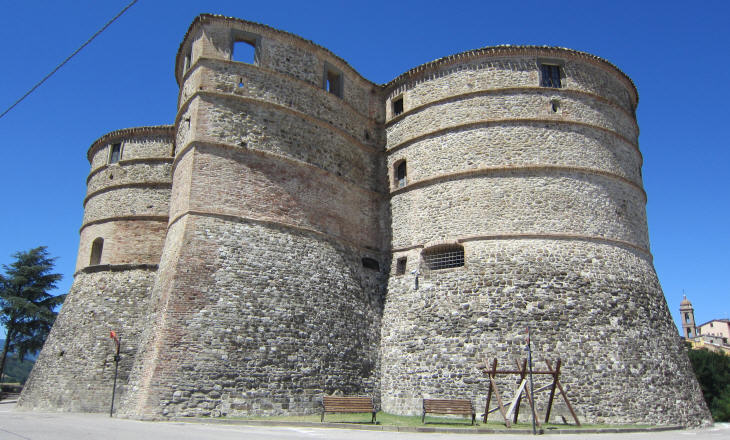 The fortress is known as il Vascello because it vaguely resembles a ship owing to a tower shaped as a bow. It is very nice to see, but it limited the view of the soldiers in the adjoining large round towers who could not see each other. Francesco di Giorgio Martini did not include "bow" towers in the design of the fortresses (e.g. San Leo) he built after Sassocorvaro. Two centuries later similar "bow" towers were built at Kilitbahir to protect the Dardanelles, but this feature cannot be found in other Ottoman fortresses. 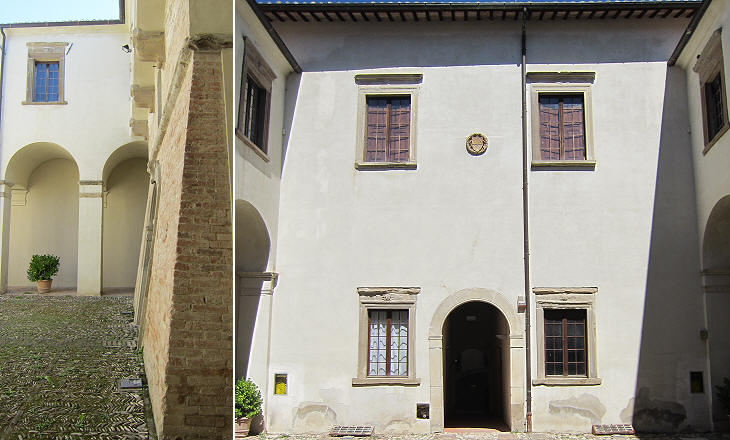 The new fortress incorporated a square tower built by Sigismondo Pandolfo Malatesta who held Sassocorvaro for five years. In designing the fortress Francesco di Giorgio Martini had to take into consideration the wishes of Ottaviano degli Ubaldini, brother of Federico da Montefeltro (*) to whom Sassocorvaro was assigned as a personal fiefdom. As a matter of fact the interior of the fortress does not have a military aspect, but rather that of a Renaissance palace. In a treatise on military architecture Francesco di Giorgio Martini wrote towards the end of his life, he chose not to mention Sassocorvaro. 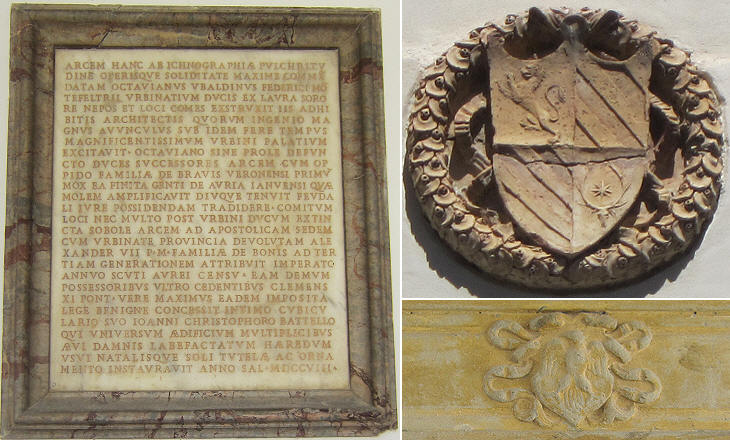 (left) 1708 inscription summarizing the history of the fortress; (right-above) coat of arms combining the heraldic symbols of the Brancaleoni (lion), Montefeltro (diagonal stripes) and Ubaldini (stag); (right-below) heraldic symbol of the Doria which can also be seen in the image used as background for this page between the letters PHI(lippino) and D(oria) C(onte)

Ottaviano degli Ubaldini did not have heirs and eventually in 1510 Sassocorvaro was assigned to Filippino Doria, a relative of Andrea Doria, a great Genoese admiral and a friend of the da Montefeltro in his early career as condottiere. The last of the Doria died in 1626 and the County of Sassocorvaro became a direct possession of the Papal State, followed by the whole Duchy of Urbino in 1631. 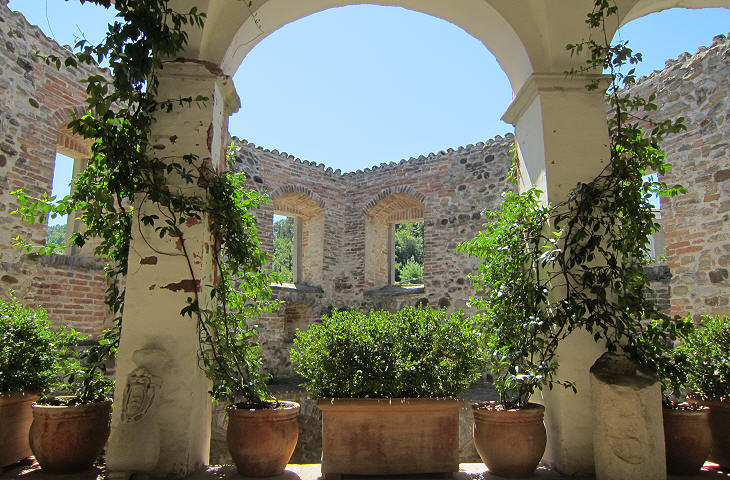 The terrace in the "bow" tower

The Popes assigned the fortress/palace to wealthy families in return for a fee. Eventually in 1708 Pope Clement XI, who was born in Urbino, gave it to Mons. Giovanni Cristoforo Battelli his intimo cubiculario (valet de chambre/groom) who restored the building, eliminated some military features which were no longer needed and wrote the history of the fortress in an inscription. 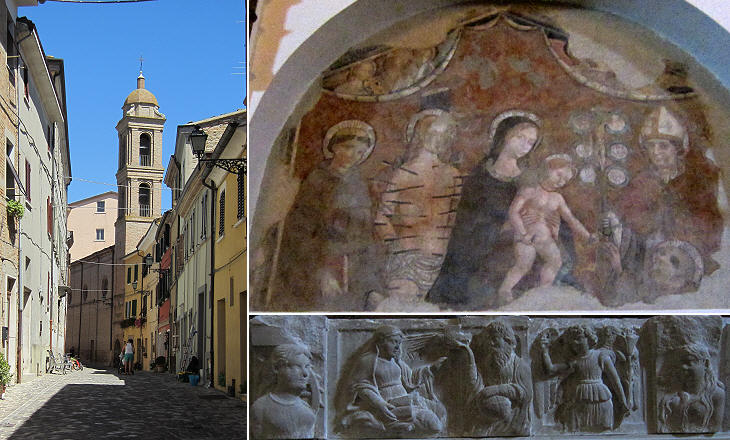 (left) Main street and bell tower of S. Giovanni Battista; (right) interior of the church: (above) XVth century fresco removed from a lost church; (below) XVth century reliefs showing episodes in the life of St. John the Baptist

The population of the historical part of Sassocorvaro has gone down in the last fifty years because many have chosen to live in Mercatale, a hamlet down in the valley, which has better road connections. In the very quiet main street which has no way out Monsignor Battelli built a large house. Collegiata di S. Giovanni Battista, the town's main church on the edge of a precipice, retains some interesting works of art.

(*) It is uncertain whether Ottaviano degli Ubaldini was the brother or the nephew of Federico da Montefeltro, who was born an Ubaldini and was recognized as a da Montefeltro by Pope Martin V.