This page deals with the gates of some towns of the Papal State. The gates of Rome are discussed in separate pages. Military, security and taxation reasons justified the need to provide each little town of the state with walls.
New walls or restoration of the existing ones were celebrated by embellishing the gates, which often imitated the gates of Rome, although in a sort of provincial fashion. 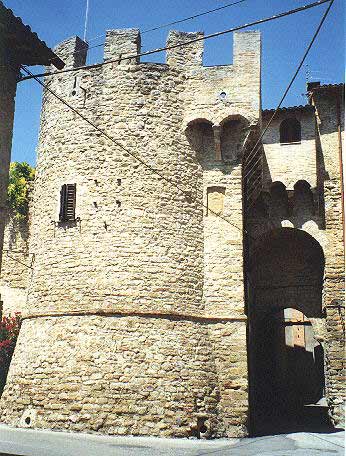 In the heart of Umbria, celebrated for its pastures and its picturesque appearence, Bevagna retains more than a mile of walls of the XIIIth century. This gate called "Torre dei Molini" (Mills Tower) has a small coat of arms of Pope Innocent VIII which you can see in the background of this page. 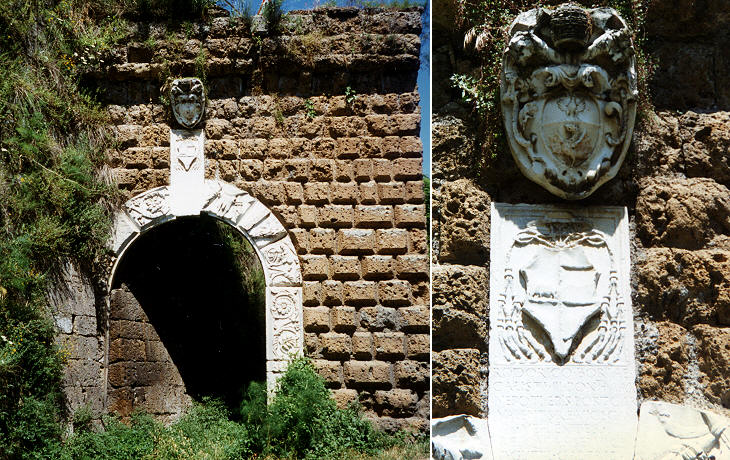 Civita Castellana was the site of Falerium, the town of the Falisci, which was captured by Camillus in 396 BC. The Romans destroyed Falerium and founded Falerii Novi in the plain, but in the Middle Ages the inhabitants went back to the old, better protected site. The little town was assigned by Pope Sixtus IV to Cardinal Rodrigo Borgia, who built new walls and on the top of the hill a fortress, which was enlarged by his successors and was used for centuries as a prison. The strength of the fortress eventually made the walls redundant and they were pulled down with the exception of the main gate. The coat of arms of Cardinal Borgia (future Pope Alexander VI) is topped by a coat of arms of Pope Paul V which was added more than a century later. 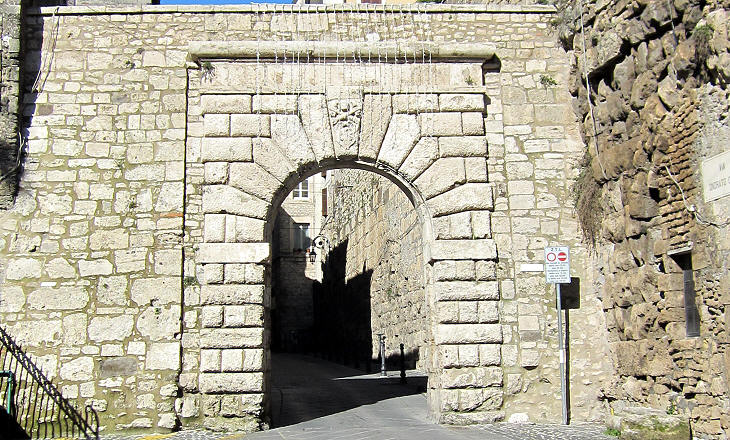 Anagni is also called "la Città dei Papi" because of the four popes who were born here (Innocent III, Gregory IX, Alexander IV and Boniface VIII, all between 1198 and 1303) and who made it prosperous. The walls were largely restored by Pope Pius IV in the XVIth century. Above you can see Porta S. Maria, which resembles Porta Pertusa. You may wish to read about Ferdinand Gregorovius' walk in Anagni. 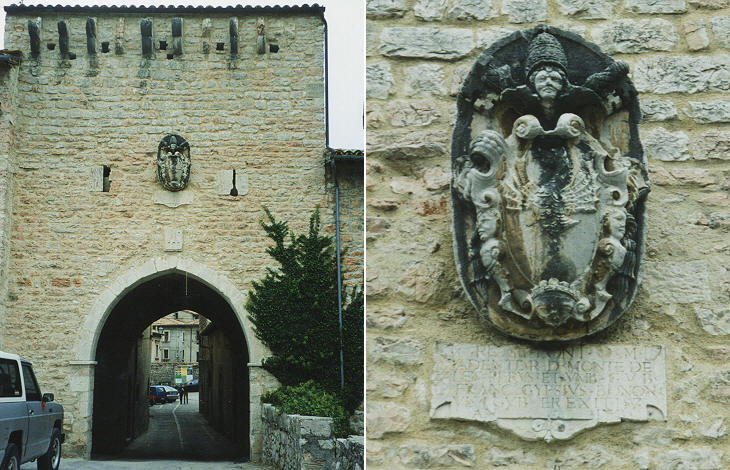 Visso is a small town in Val Nerina commanding one of the main roads crossing the Apennines. Its medieval walls were restored by Pope Gregory XIII in the late XVIth century. The coat of arms on the gate named Porta di Via Lata, is somewhat unusual maybe because its architect had hearsay knowledge of the coats of arms being sculpted in Rome. 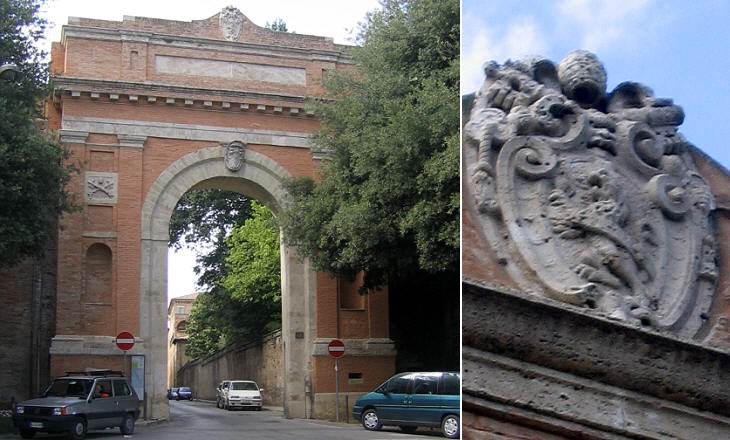 Perugia, the main town of Umbria, was built on several hills and it had a very long and tortuous ring of walls. With the growth of the population new peaks were included in the walls and new gates opened. Porta S. Costanzo was erected under Pope Sixtus V in an addition to the existing walls to protect the church of S. Pietro de' Casinensi. 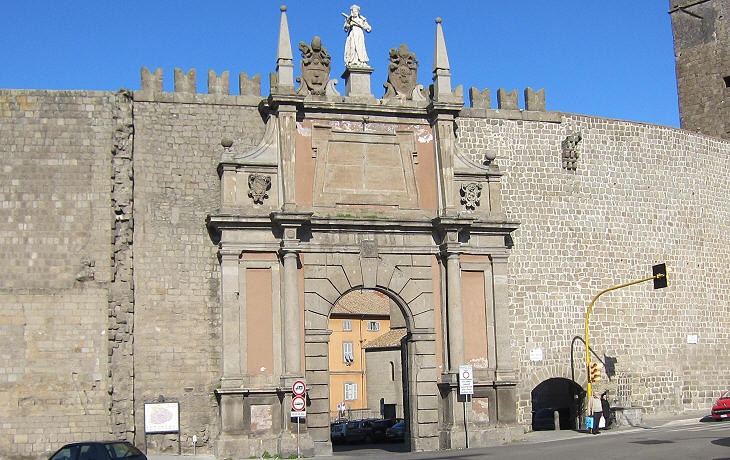 Viterbo was the central point of the extensive territory known as Patrimonium Petri and is frequently mentioned in history as the residence of the popes and the scene of the papal elections in the XIIIth century. Here the popes felt more secure than in Rome. The walls were built at that time. The most important gate is Porta Romana rebuilt on the occasion of a visit of Pope Innocent X in 1653 and embellished by Pope Clement XI in 1705. Between the coats of arms of the popes, the statue of St. Rita, patroness of Viterbo. 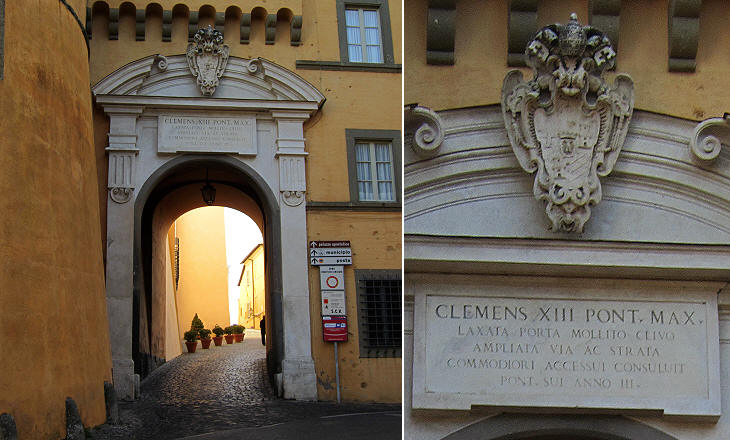 Castelgandolfo, splendidly situated high above the Lake of Albano, came into direct possession of the popes in 1596. Pope Urban VIII erected a large Papal palace and Castelgandolfo became (and still is) a favourite summer resort of the popes. The access to the central square is controlled by this elegant XVIIIth century gate with the coat of arms of Pope Clement XIII. 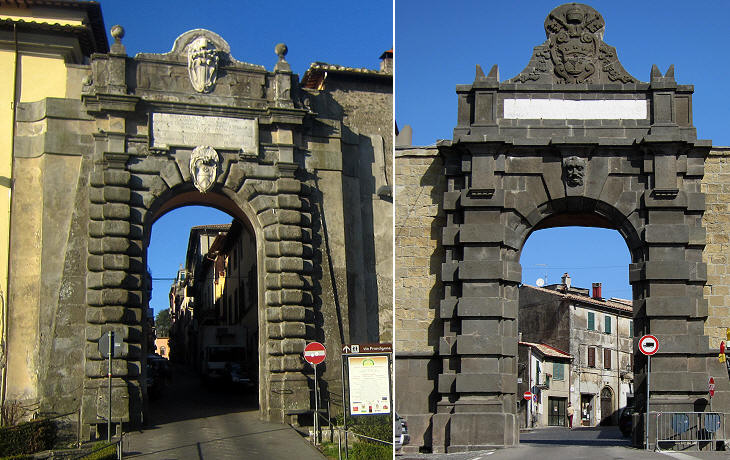 Montefiascone and Valentano are two little towns on the hills surrounding the Lake of Bolsena. They both had new gates in the XVIIIth century. Porta Viterbese was erected during the pontificate of Pope Benedict XIV in 1744. The main gate of Valentano, in the former Duchy of Castro was completed in 1779 during the pontificate of Pope Pius VI, but it was designed in the XVIth century.