- Camerino
(View from the walls of Ripatransone) 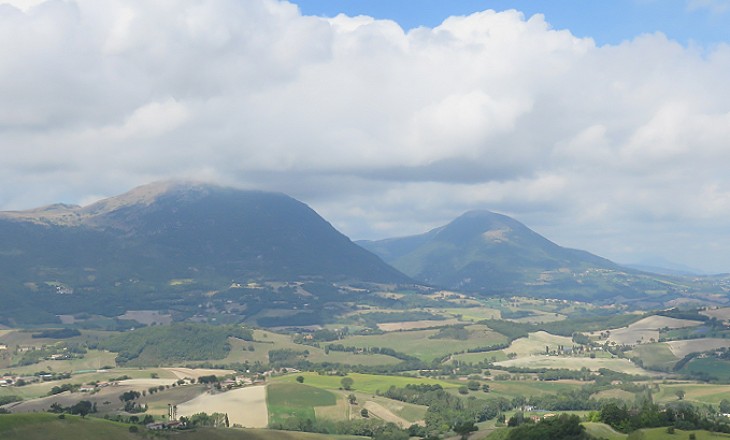 View of the Apennines from Camerino. The Umbrian town of Nocera is situated on the other side of the mountain to the left (Mt. Vermenone 1,364 m/4,475 ft)

Camerino is situated on an isolated hill (661 m/2,170 ft) very near the Apennines divide and during its long history it was often considered part of Umbria. Pliny the Elder in his Historia Naturalis lists the town among those of Regio VI (Umbria), rather than of Regio V (Picenum/Southern Marches). During the Middle Ages it was part of the Longobard Duchy of Spoleto, and when it was included in the Papal State it was occasionally regarded as a town of Umbria, rather than of the Marches. In 1997 Camerino and the Umbrian towns on the other side of the Apennines were struck by a major earthquake. 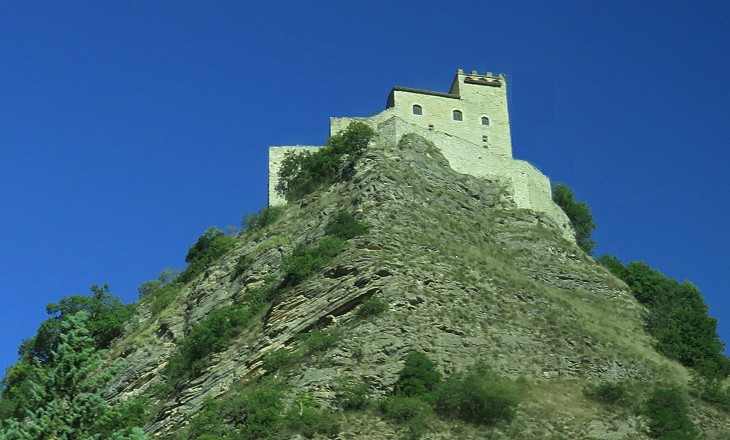 On a singularly commanding hill-top, which stands out isolated from the hills behind it, at the mouth of this narrow and beautiful defile, where the Scortachiari falls into the Chienti, stands the castle of Varano. (..) The stronghold in question must have been a very important place, which could evidently have been suffered to remain in no hands save those of the sovereign lords of the district. A very little improvement of the locality by the hand of man, has rendered the rock on which the castle stands altogether isolated on all sides, and accessible only by a drawbridge. The position commands (..) the valley of the Chienti, which formed the main avenue of access to this mountain-circled district from the east.
Thomas Adolphus Trollope - A Lenten Journey in Umbria and the Marches - 1862
In 1259 Camerino was sacked by King Manfredi whose troops were mainly composed of inhabitants of rival towns (e.g. Fabriano and Matelica). Rocca di Varano, a small XIIth century fortification, was strengthened in the early XIVth century to protect Camerino from attacks coming from the east. 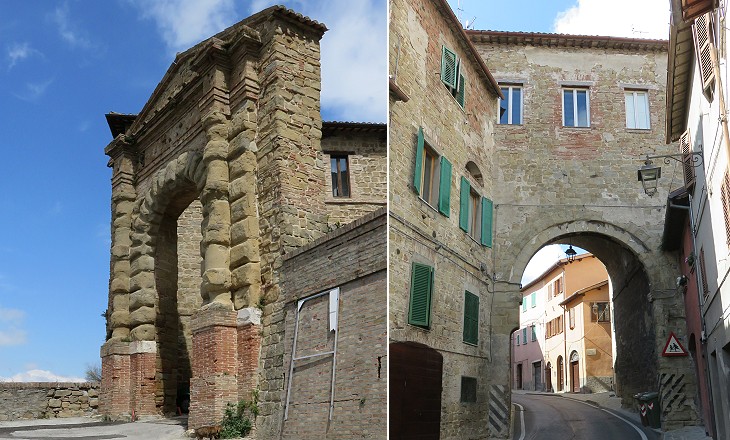 (left) Porta Malatesta (1511), named after Giovanna Malatesta, daughter of Sigismondo Pandolfo, ruler of Rimini, and wife of Giulio Cesare Varano, ruler of Camerino, who died in 1511; (right) vaulted passage at the northern entrance to Camerino

For him who has patience enough to persist in being dragged up the hill in his carriage, the approach to Camerino is a very long and tedious affair. There are the inviting and picturesque old gateways of the city tantalizingly close above your head; and the patient road goes winding and zigzagging about, showing you now one part of the city wall and now another, till it seems as if the gateway would never be absolutely reached. Trollope 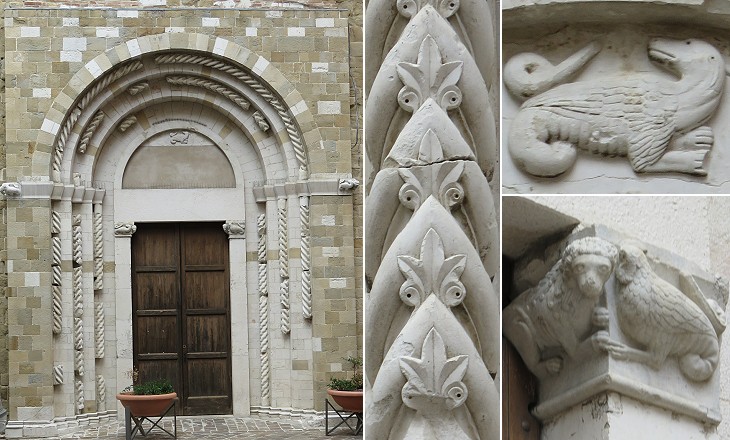 Portal of S. Francesco and details of its decoration (1228)

In 1799 a major earthquake struck Camerino. Its Romanesque cathedral collapsed and was entirely rebuilt. Other old churches were damaged. S. Francesco retains elements of its original portal, which was decorated with real (lion, cock) and mythological (dragon) animals. It was one of the first Franciscan convents in the Marches. 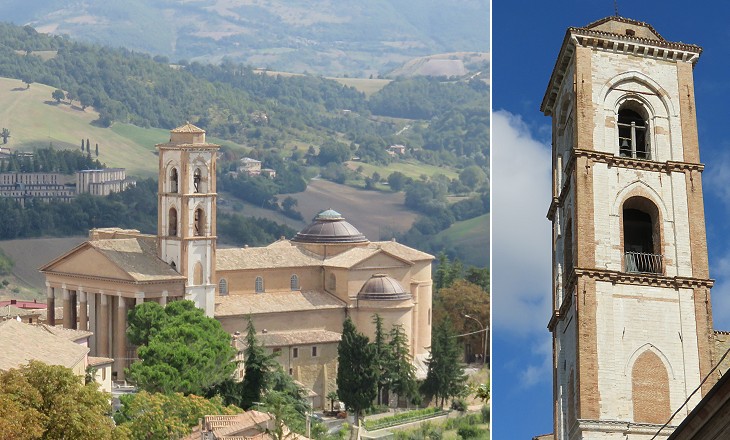 S. Venanzio: (left) the church seen from Palazzo Ducale with the new temple-like façade designed by Luigi Poletti, the architect who rebuilt S. Paolo fuori le Mura in Rome; (right) right bell tower which did not collapse in 1799 (the left one was not rebuilt)

Another large and handsome church in the lower part of the city was also entirely destroyed, with the exception of the west front; the highly ornamented doors and windows of which are interesting specimens of the ecclesiastical architecture of the thirteenth century in this part of Italy (..). This fine church has remained in ruins till, a year or two ago, the reconstruction, which is still in progress, was commenced. Trollope 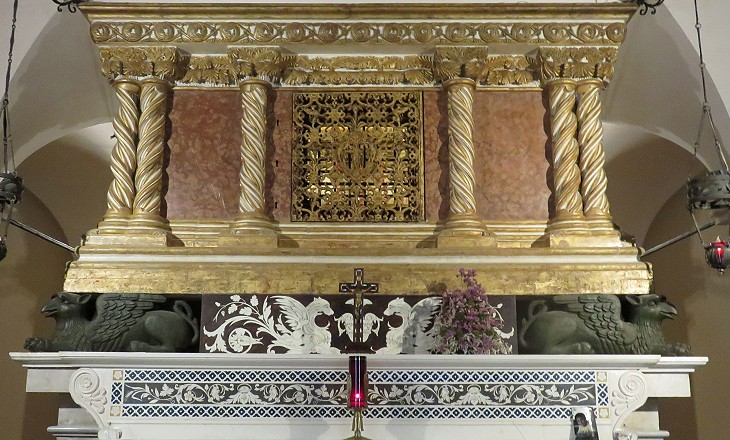 St. Venantius was a Christian youth who was beheaded at Camerino together with St. Porphyrius, his tutor, at the time of Emperor Decius. An XIth century account of his life lists a number of miraculous events connected with his martyrdom, many of which are traditionally associated with other saints (e.g. fountains sprang up where his head bounced and struck the earth in three different places, similar to what occurred to St. Paul).
In line with Roman practices he was buried out of town and on the site a church was built in the IVth century. His bones were stolen in 1259, but they were returned to Camerino in 1269.
In the XVIIIth century the brotherhood of the citizens of Camerino living in Rome was assigned a church (now lost) which was dedicated to St. Venantius and St. Ansovino, Bishop of Camerino in the IXth century. 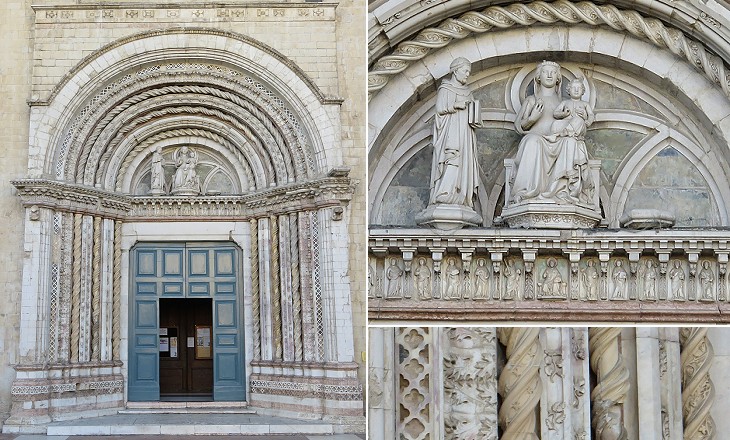 S. Venanzio was not the cathedral of Camerino, the see of a very important diocese, which at one time included those of San Severino, Tolentino, Treia and Cingoli. It was however the church dedicated to the patron saint of the town and as such it was rebuilt, enlarged and modified many times and embellished with a beautiful portal. Palazzo Ducale: (left) portal on the main square of the town (redesigned at the time of Pope Gregory XIII); (right) loggia on a terrace of the palace above the city walls

It is strange that the convulsion which sufficed to throw down these two churches should have left uninjured the immense palace of the Varani, the medieval lords of Camerino and its duchy. This vast building, the back part of which rests on and forms part of the walls of the city, is but a few steps from the cathedral, on somewhat higher ground, and must have been, one would have thought, far less able to stand the effect of a shock than the church. Resting on the city wall, which encircles the top of the hill, and in this part of its course closely skirts its almost precipitous edge, the wall of the palace as seen from without the town is of very great height, and makes a picturesque and imposing appearance; but does not suggest the idea of great strength nor stability. Trollope 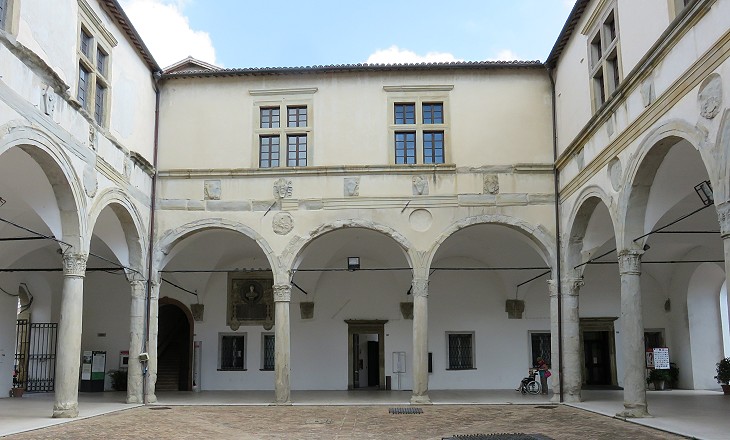 The grand courtyard was built in 1489-1492 and it is the heart of Palazzo Ducale. It was decorated with the (worn out) heraldic symbols of Giulio Cesare Varano and his wife Giovanna Malatesta and it was aimed at giving the palace a modern aspect, because it was made up of three adjoining buildings of different periods. The complex is a maze of passages, terraces and small halls (the frescoes in one of these halls can be seen in the introductory page). Today it houses the University of Camerino which was founded in 1336. 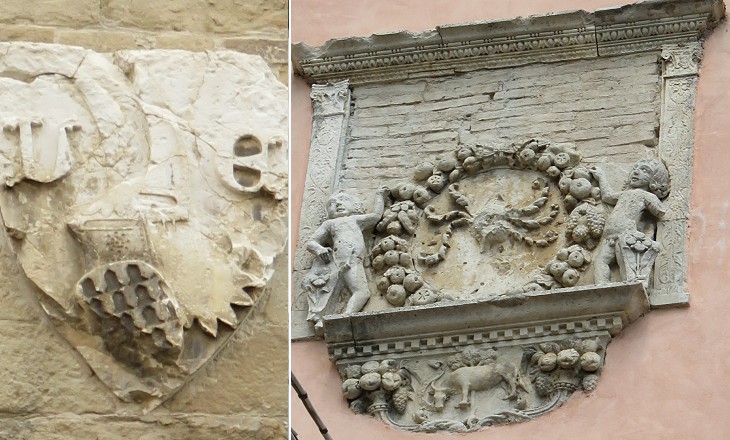 (left) Coat of arms of the Varano; (right) erased celebratory inscription which might have concerned Cesare Borgia, son of Pope Alexander VI, because of the cow, the heraldic symbol of his family

In 1502 Cesare Borgia was appointed Vicar of the Pope at Camerino to replace Giulio Cesare Varano who was charged with having killed a cousin and not having made the periodical payments due to the Papal State. Giulio Cesare Varano sought the help of the Montefeltro of Urbino and of the Republics of Venice and Florence, but eventually he had to surrender Camerino. He was taken prisoner and shortly after he died (according to Francesco Guicciardini he was strangled). Three of his sons were murdered by order of Cesare Borgia. 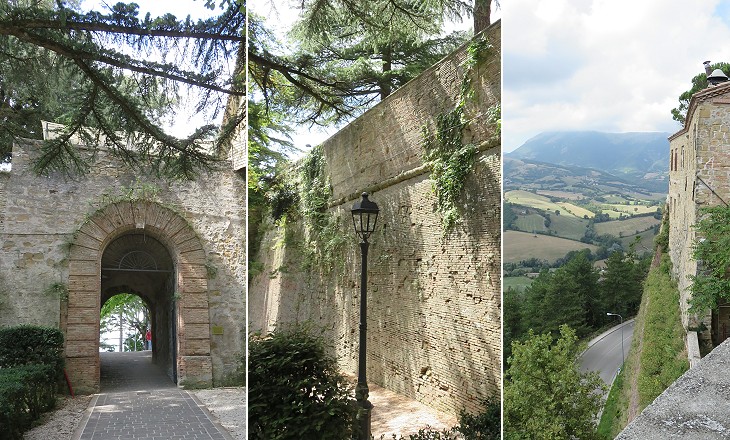 One of the first decisions of Cesare Borgia was to build a state-of-the-art fortress at the southern end of the town. The death of Pope Alexander VI in 1503 caused the fall of the power of the Borgia in Italy. Giovanni Maria Varano, the only surviving member of the family, returned to Camerino and in 1515 was formally appointed Duke of the town by Pope Leo X. He completed the construction of the fortress, which the inhabitants used to call Muralto, because of its precipitous wall at the southern end.

Palazzo delle Esposte aka Ospedale di S. Maria della Pietà. The image on the right shows a coat of arms of Pope Urban VIII celebrating improvements to the building

Alexander VI was not the only pope who tried to use some Papal possessions to create an independent state for his relatives. Pope Paul III followed in his footsteps, as he managed to assign the Duchy of Parma, that of Castro and other fiefdoms in northern Latium to his relatives. In 1540 he assigned Camerino to his grandson Ottavio, but in 1545 he decided that the town should be directly ruled by a papal envoy.
Palazzo delle Esposte was built by Giulio Cesare Varano in 1474 and it was subsequently greatly enlarged by the Popes. It could be called an orphanage, but the name Esposte indicates it was a home for abandoned baby girls. The first statistical data on the number of abandoned babies were collected in the XIXth century and they suggested that in the Papal State some 3 out of 100 babies were abandoned. 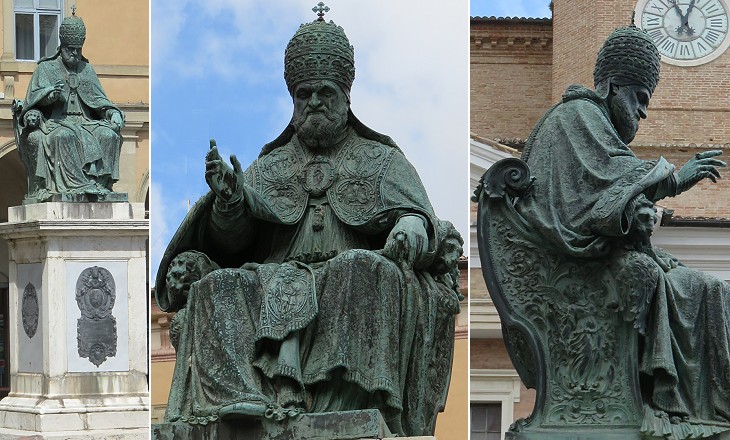 The decision to erect a bronze statue to Pope Sixtus V was taken soon after his election. His mother was born in the district of Camerino and when he was still a cardinal he had accepted the honorary citizenship of the town. In December 1586 however Pope Sixtus V created the diocese of Tolentino, the territory of which was part of that of Camerino. This meant a reduction in the importance of Camerino.
Tiburzio Vergelli was born at Camerino. He assisted Antonio Calcagni, his master, in making a statue of the Pope at Loreto. The two statues are very similar; another bronze statue of the Pope at Fermo can be seen in the introductory page. Vergelli was eventually asked to work on the new doors of Santa Casa di Loreto. 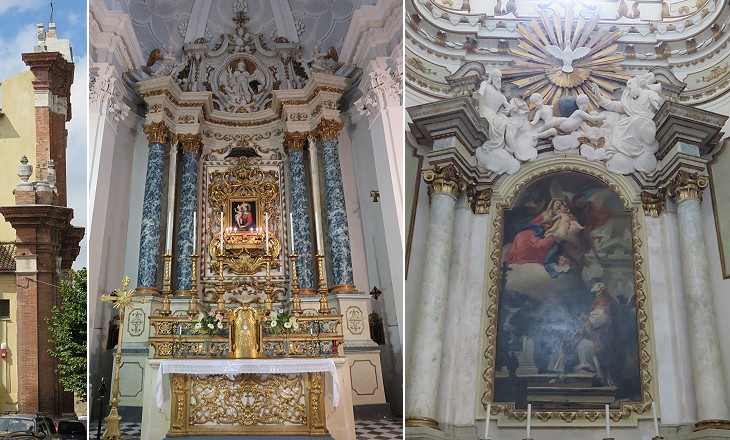 In the XVIIth/XVIIIth centuries many Congregations of the Oratory of St. Philip Neri were founded in the Marches. The Oratorians built churches at Macerata, Matelica, Ripatransone, Treia and other towns. The founding members of a new Oratory were usually wealthy citizens who could afford spending money on the decoration of their churches to make them resemble those of Rome. 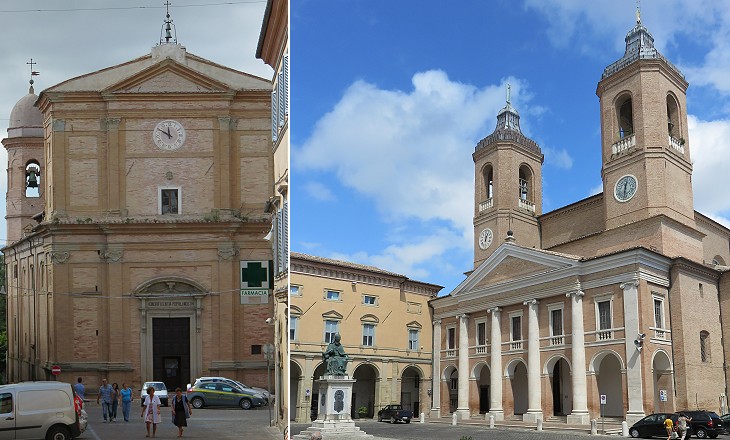 Both churches were damaged by the 1799 earthquake. The vaulted ceiling of S. Maria in Via collapsed and the upper part of the façade had to be redesigned. The Cathedral was totally rebuilt because projects contemplating the partial use of the remaining walls were refused by the Bishop. The final solution which was completed in 1835 is utterly in contrast with the overall urban layout of Camerino. 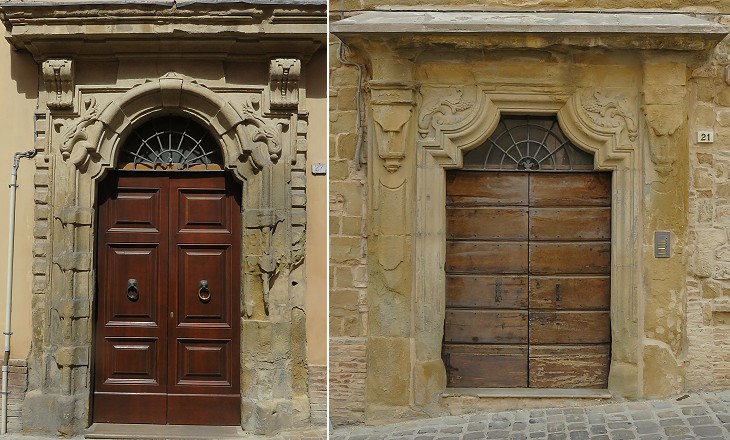 The city is full of the traces of its past wealth (..). There are facades of a considerable number of private dwellings, which now but serve to conceal interiors the abode of poverty and decadence, but which must have been the homes of opulent and lordly citizens. Trollope

The image used as background for this page shows three small houses, the symbol of Camerino.