- Fermo: The Acropolis
(View from the walls of Ripatransone) 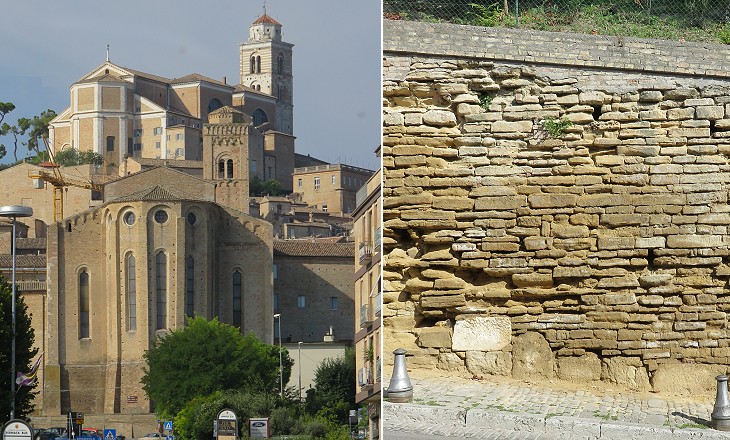 (left) The acropolis with the apse of S. Francesco and the Cathedral; (right) Roman walls along the street leading to the top of the hill

The driver assured us that the town on the high hill before us, - the highest of all the towns we had seen in the course of that morning's journey, was indeed the city of Fermo; and that the remarkable building which crowned the square-looking rocky lump which formed the apex of the hill, was, not a castle, but the Cathedral. (..) The altitude is really considerable, (..) but again and again the road seemed to approach the place only to start off anew for a fresh huge circuit in a totally different direction. Up to the last we were quite at a loss to conjecture on which side of the city we should finally effect an entrance; and when at length we were absolutely within an hundred paces of one of the gates of the town, our driver turned away from it to follow a road running at the foot of the wall till he reached a different gate on another side of the hill. The circuitous nature of the ascent had at all events brought with it the advantage of showing us the position and aspect of the city from almost every quarter of the compass. And it must be admitted to be a very fine one. (..) The appearance of the city from the outside is particularly picturesque, partly from the imposing masses, and varied weather-stained tints of the venerable old stone walls, and partly from the very remarkable position of the Cathedral, raised on its precipitous sided rock clear above all the other buildings of the town.
Thomas Adolphus Trollope - A Lenten Journey in Umbria and the Marches - 1862 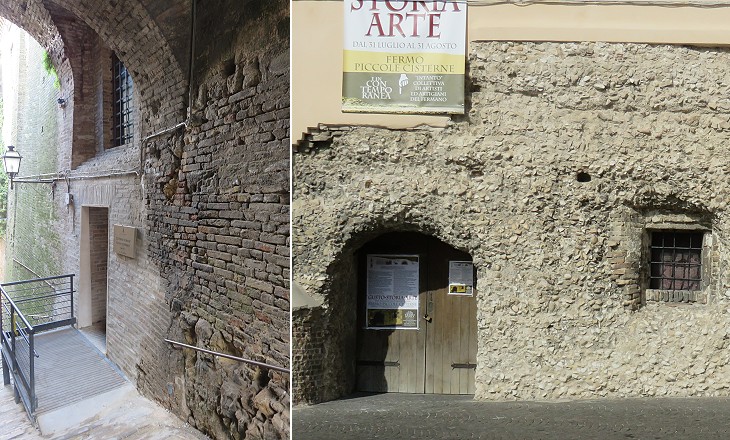 At the beginning of the IIIrd century BC the Samnites, a bellicose people living on the Apennines, were defeated by the Romans who established their supremacy over the whole Italian peninsula. Initially this condition was accepted by the Piceni, who lived in the southern Marches, but eventually they rebelled. They were beaten in 268 BC; the subsequent peace agreement allowed them to retain control of Asculum (Ascoli), their main town, but they had to accept the establishment of a Roman outpost in their territory.
The Latin adjective firmus meant firm/steady and Firmum, the name given to the new settlement was an indication of its military nature. Firmum sided with the Romans during the Carthaginian and Confederati Wars and its motto is Firmum, Firma Fides Romanorum Colonia (Fermo, Roman colony by the firm loyalty). 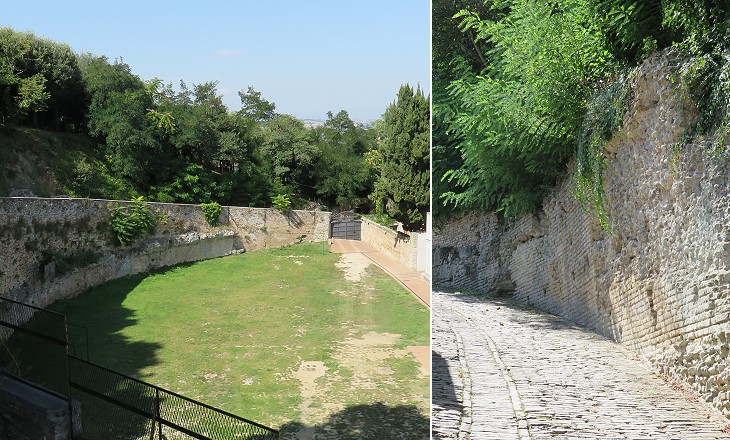 Site and walls of the Roman Theatre

In the late Ist century BC Emperor Augustus resettled many veterans to Firmum and gave its inhabitants full citizenship rights. The military origin of the town faded away in the first centuries AD and the town became a trading centre after it had built harbour facilities at the mouth of a small nearby stream (south of today's Porto San Giorgio). The old cisterns which had been built to withstand sieges were enlarged and a net of wells and underground conduits distributed the water throughout the town. A small theatre was nested in the slope of the hill. These facilities were built in the late Ist century BC and repairs/improvements were made in the late IInd century AD. 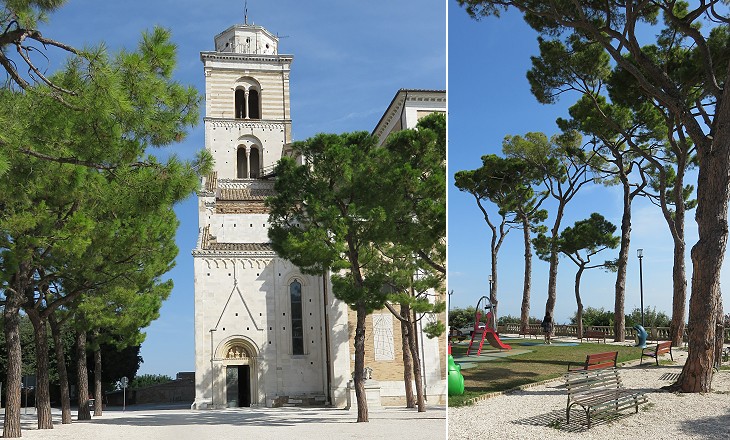 Girfalco, the name was perhaps a reference to gyrfalcons, large falcons, which nested there (aka il Girone): (left) side view of the Cathedral with its XIIIth century bell tower; (right) gardens on the site of the fortress (you may wish to see some views from Girfalco in the introductory page)

The hill suddenly rises into a high rock-sided platform, large enough to contain the Cathedral and a small space before the west front of it, planted as a garden, and called the "Girone." And this spot, with the Cathedral and the promenade in front of it, is the glory of Fermo. (..) No vestige of the fortress, once the most formidable in all the Marches, remains to encumber the magnificent esplanade, which formed the site of it; and which assuredly has given to the inhabitants more gratification in its present condition, than it could have done as a fortress. Trollope
The esplanade at the top of the hill is the result of the dismantling of a XIIIth century fortress by the citizens of Fermo in 1446. It was destroyed because rather than being used to protect the town against external enemies, it had become the eagle's nest from which local warlords oppressed the inhabitants of Fermo. It likely stood on an artificial terrace built by the Romans. 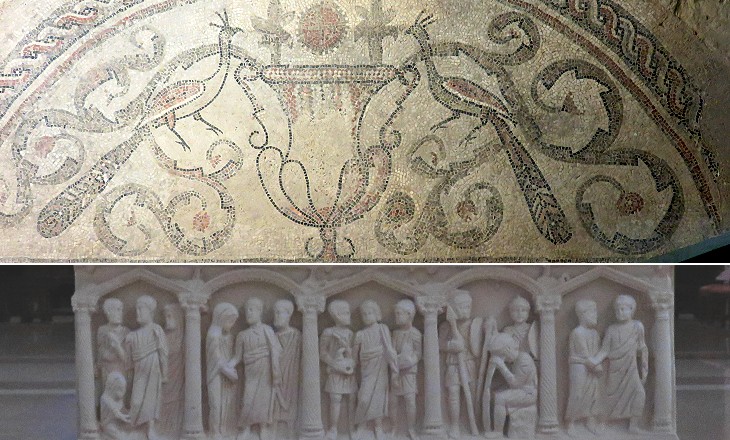 The terrace at the top of the hill housed a temple upon which a Christian church was built in the Vth century. This church was replaced by a larger building in the XIIIth century. In 1934 a fragment of an old floor mosaic was unearthed by chance. It is very similar to mosaics found at Aquileia, Ravenna and Ancona.
The town was sacked by the Visigoths in 410, suffered damage during the Greek-Gothic War and was eventually conquered by the Longobards and included in the Duchy of Spoleto. Unlike other Roman towns of the region (e.g. Urbs Salvia) Fermo was not abandoned owing to its strong military position. 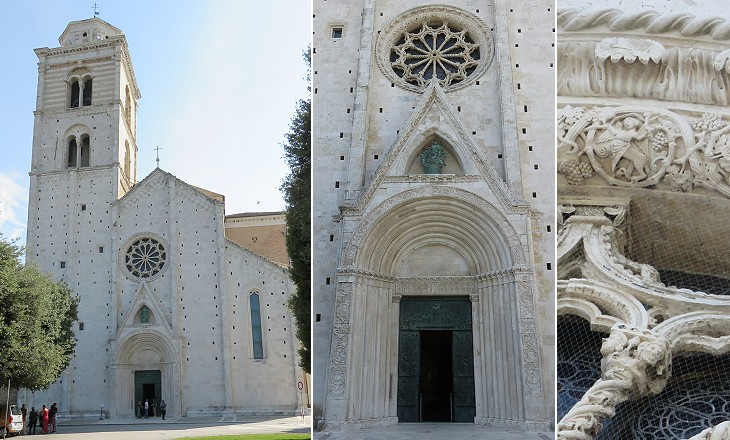 In 1199 the citizens of Fermo established their Libero Comune, i.e. their self-government bodies, which were not appointed by the German Emperors or the Popes. The town was rich; Porto San Giorgio, a new small harbour, allowed its merchants to profit from the growing trade between Italy and the Levant. In 1226 a new large Cathedral was built by Giorgio da Como, a Lombard master mason who in 1228 designed the porch of S. Ciriaco at Ancona and worked at the Cathedral of Jesi. The rose window was added in 1348 and the bell tower was built in the XIII/XIVth centuries with the final turret being added in the XVIIIth century. 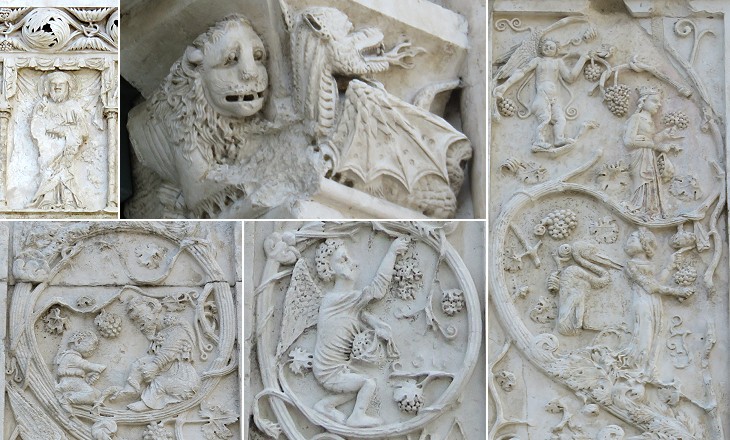 Cathedral: details of the main portal decoration which is not limited to religious subjects, but includes animals and scenes from popular tales

The church, like the great majority of the cathedrals of the Papal States, has been modernized within to the destruction of all interest or beauty. It is well, when a similar fate has not befallen the exterior also. At Fermo the medieval exterior with its fine grey stone colouring, and a great part of its original rich ornamentation of door and window remains. Trollope
The interior of the Cathedral was entirely redesigned in 1781-1789, but the façade and the atrium were not modified. 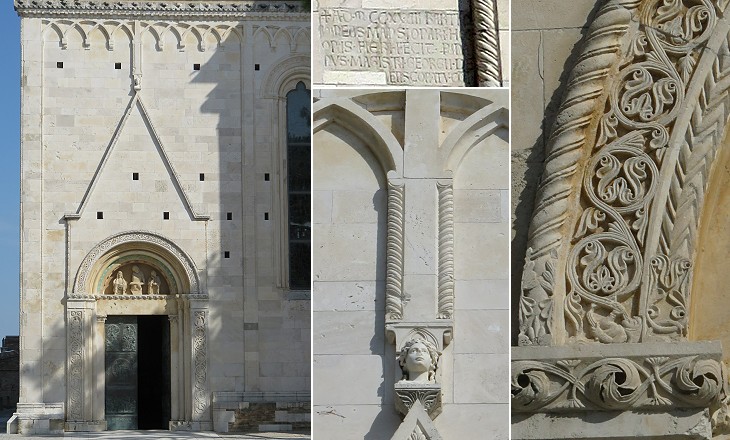 Cathedral: side portal and details of its decoration including the inscription with the name of the architect. Another detail can be seen in the image used as background for this page

The Cathedral was faced with white limestone from Dalmatia. It is said that on a very clear day the mountains of Dalmatia can be seen from Fermo. It is possible that some sculptors from that region came to help Giorgio da Como. A comparison with the decoration of the Cathedral of Traù which was built in the same period shows similarities and differences between the two regions in art developments. 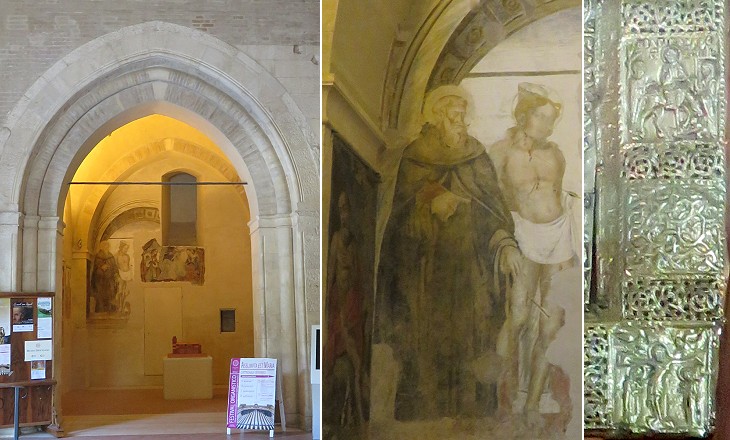 Cathedral: (left/centre) base of the bell tower with late XIVth century frescoes; (right) details of an XIth century Byzantine metal frame with scenes from Jesus' life (it calls to mind a door of S. Paolo fuori le Mura)

The church was preceded by an atrium which retains its medieval appearance. Perhaps it replaced a narthex of the old church, a section of the building that was not considered part of the proper church. The Cathedral, notwithstanding its redesign in the XVIIIth century retains some of the works of art which embellished it prior to the changes. In this otherwise entirely empty chamber there are a few interesting sepulchral monuments; one of a high order of artistic merit, to a member of the Visconti family, which is important in the history of art, from furnishing the sole record by which the name of the sculptor who executed it has been preserved to us. "Magister Tura de Imola fecit hoc opus", as we are informed by the Gothic letters of an inscription on the base of it. And had it not been for that curt piece of information, the name of Tura or Bonaventura da Imola would have been with those of the "brave men before Agamemnon" (*). Trollope
(*) Many brave men lived before Agamemnon; but all are overwhelmed in eternal night, unwept, unknown, because they lack a sacred poet. Horace - Odes IV. IX
The symmetrical spacing of the figures, the design of the throne with some perspective elements and the classical motifs of the cornice make Bonaventura da Imola a Renaissance forerunner.
Giovanni Visconti da Oleggio was a member of an important family of warlords from Milan. He was made ruler of Fermo in 1360 by Cardinal Gil de Albornoz. 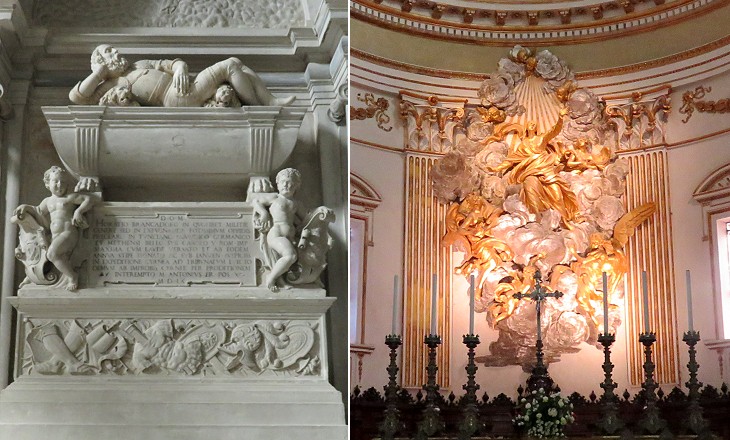 Cathedral: (left) Monument to Orazio Brancadoro by Alessandro Vittoria, a Venetian sculptor (1560); (right) Assunta by Gioacchino Varlè, a young sculptor from Rome who eventually spent most of his life at Ancona (late XVIIIth century)

The Brancadoro family is still extant; and I find the name fourth in that list of the richest proprietors (of Fermo) which I quoted before, as having the Chapter of the Cathedral and the Archbishop at the head of it. Trollope
Orazio Brancadoro fought for Emperor Charles V in many parts of Europe including an expedition against Ottoman corsairs in Corsica. Cardinal Cesare Brancadoro was Archbishop/Prince of Fermo in 1803-1837.

Move to Piazza del Popolo or to The Lower Town.