A road to the right leads to Ascoli, the capital of a Delegation comprising an area of 50 square leagues and a population of 79,000 souls. It occupies an exceedingly strong and beautiful position on the Tronto close to the Neapolitan frontier; it is the seat of a bishopric and, although a dull and dilapidated place, it has a population of 12,000 souls. Handbook for Travellers in Southern Italy - Murray 1853 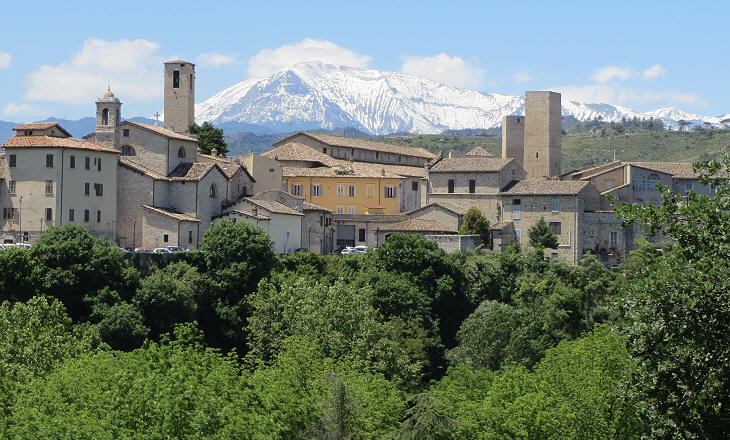 View of Quartiere S. Giacomo with Mount Vettore in the background on May 27, 2013; the trees hide the view of the River Tronto

Ascoli Piceno (to distinguish it from another Ascoli in Apulia) was not paid much attention by Grand Tour travellers, notwithstanding its medieval and Renaissance monuments and its picturesque location. A range of high mountains reaching its peak at Mount Vettore (2,476 m/8,123 ft) separates the town and the Tronto valley from Norcia and Valnerina. 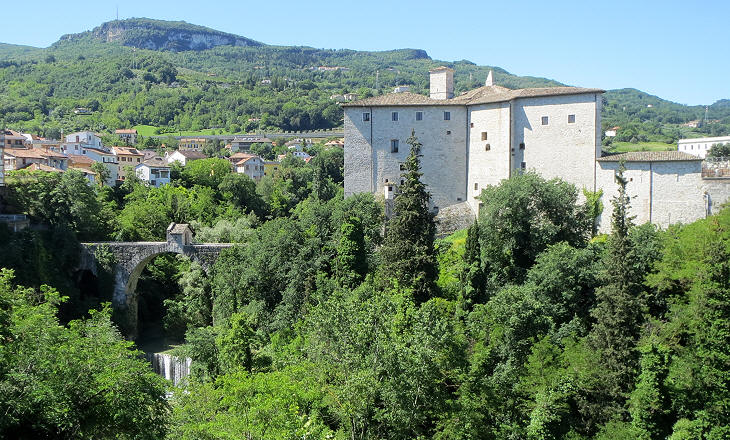 Ponte di Cecco over the Castellano stream and Rocca Malatestiana

Ascoli is naturally protected by being placed at the junction of two ravines made by the Tronto and another stream. This explains why the symbol of Ascoli (which you can see in the image used as background for this page) is a fortified bridge (rather similar to that of Orte). This natural protection allowed the inhabitants to sustain long sieges:
It was the first city to declare against the Romans when the social war broke out and its example was followed by the whole of Picenum. Asculum sustained in the course of that war a long and memorable siege against Pompey who finally however compelled the place to surrender and caused several of the chiefs of the rebels to be beheaded.
John Anthony Cramer - A Geographical and Historical Description of Ancient Italy - 1826 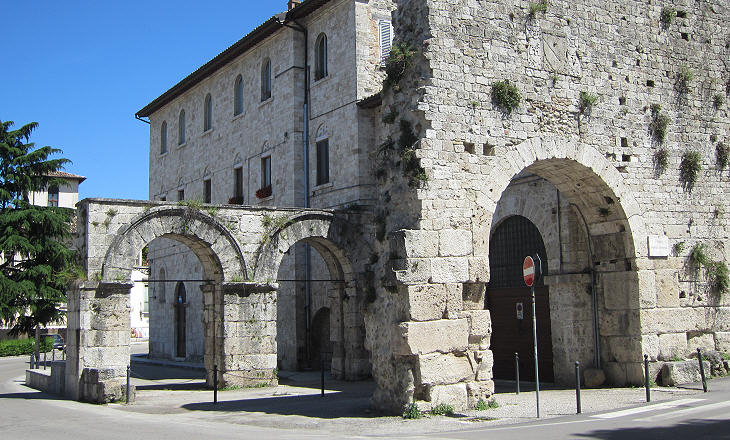 The Romans built a road to strengthen their control over the Piceni, the Italic tribe who lived on the northern Adriatic coast of the peninsula. It was known as Via Salaria. It was a very daring enterprise as the road followed the deep and long ravines made by the Velino and Tronto rivers. A major advantage of this choice was that Via Salaria crossed the water divide between the Tyrrhenian and Adriatic seas at a rather low height (1,010 m/2,829 ft), so that it was passable during most of the year.
Via Salaria entered Ascoli at its western end where it was not protected by ravines. A high bridge on the Tronto is evidence of the skills of Roman engineers. They could have built a much smaller bridge at the level of the river bank, as they had done at an earlier time with Ponte di Cecco (from which Via Salaria exited Ascoli), but the high bridge was meant to show the wealth of the town and to provide an easy communication with an urban settlement on the other bank of the Tronto. Solestà derives from solum extra urbem (out of town land). 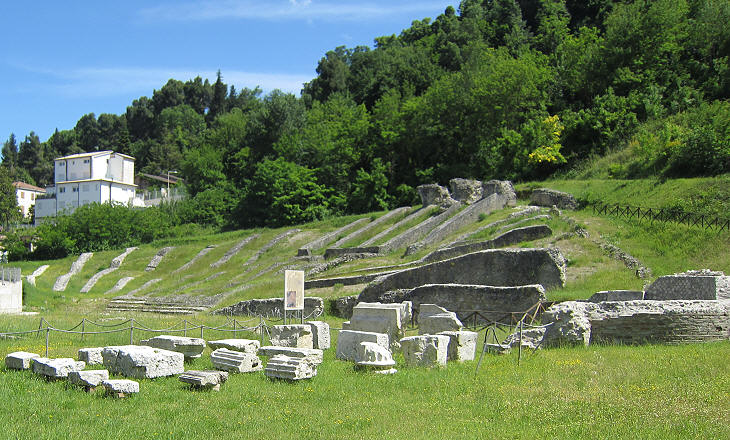 The inhabitants of ancient Asculum had a theatre which has been excavated after WWII. It was built at the foot of a hill which is inside the town enclosure. According to tradition in 91 BC Roman magistrates were killed at the theatre during a performance; it was the signal of a general rebellion against Rome. 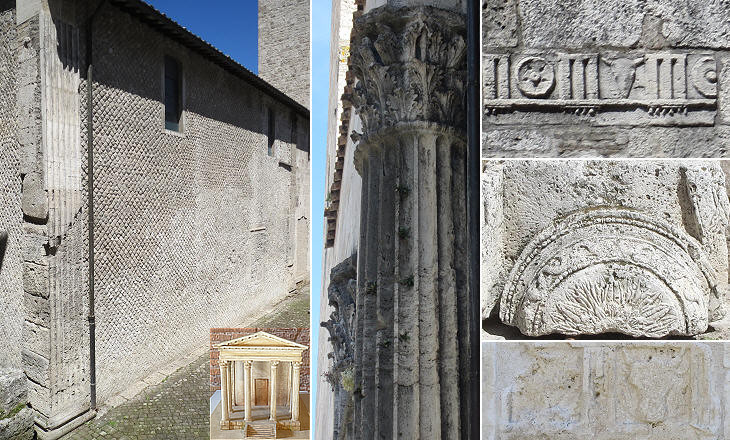 (left/centre) Roman walls (in opus reticulatum) and columns at S. Gregorio; (inset) model of the temple; (right - in descending order) Roman reliefs at the Baptistery, Palazzo Comunale and S. Ilario

S. Gregorio is a small XIIth century church built utilizing the cell and some columns of a Roman temple. Roman reliefs can be seen on the walls of many medieval buildings. 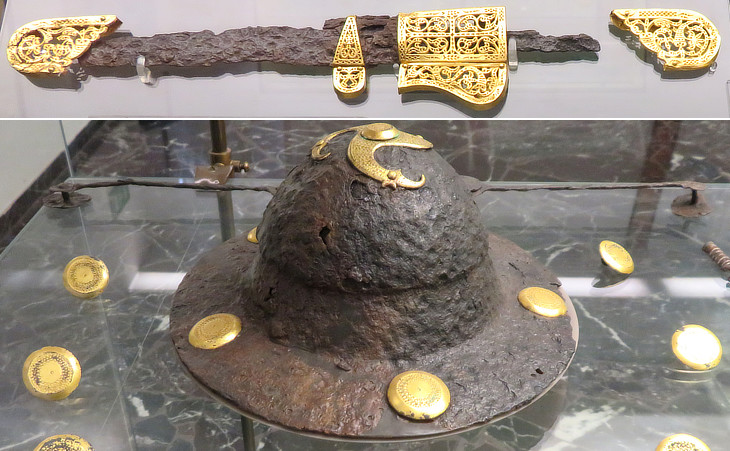 In 578 AD the inhabitants of Ascoli, relying on their fortifications, did not surrender to the Longobards who, when they seized the town, razed it to the ground. Ascoli was annexed to the Duchy of Spoleto, detaching it from the lower Tronto valley which remained in Byzantine hands for some time. The Longobards built a small fortress outside Ascoli in order to control their new territories. 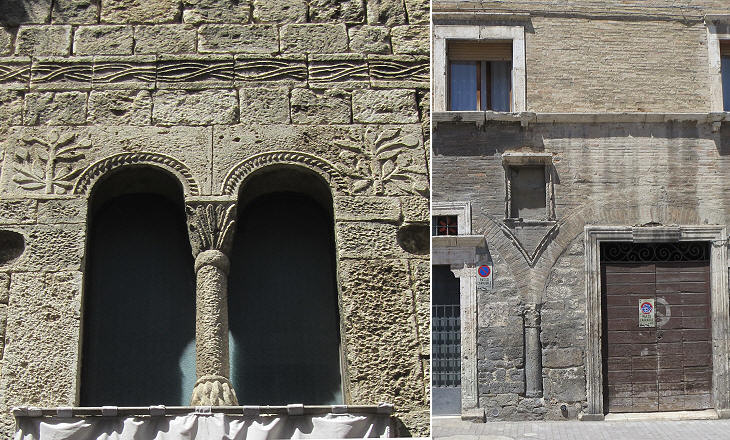 The urban layout of Ascoli is based on that of the ancient town with two main roads dividing it into four quarters. The historical quarter of S. Giacomo which is situated in the north-western part of Ascoli between Porta Romana and Porta di Solestà, retains its medieval character. Notwithstanding its name, Palazzetto Longobardo was built in the XIIth century when Ascoli was a flourishing Comune (city state) within the frame of the Papal State. 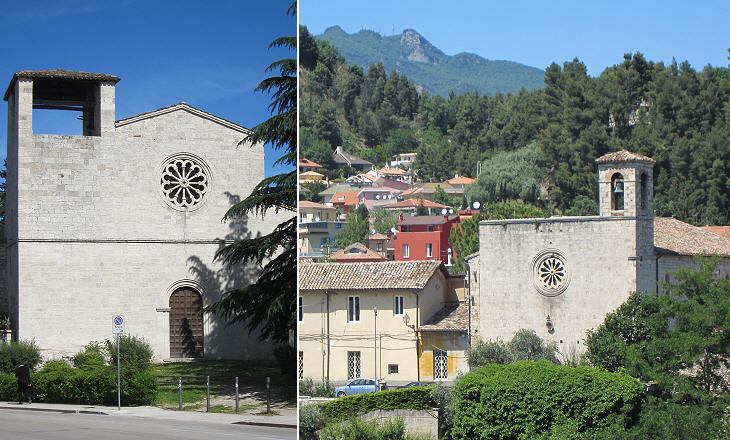 Ascoli is located just a few miles north of Abruzzo, a region of Italy where a particular type of Romanesque architecture developed in the XIIth-XIVth centuries. S. Maria di Collemaggio at L'Aquila, the historical main town of the region (it opens in another window) is the most impressive church of this style. Its influence can be observed in the design of some minor medieval churches of Ascoli. Some of them, such as S. Vittore, were freed from later additions in the XXth century. 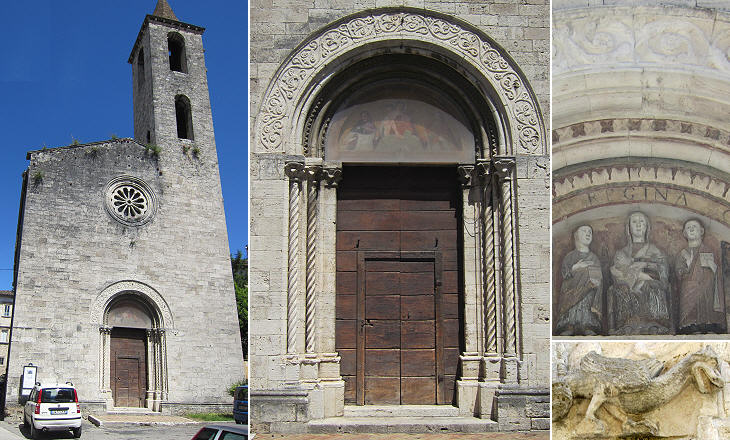 S. Giacomo gave its name to a quarter of Ascoli. Although being a rather small building the church has three portals one of which comes from an older church. A feature of S. Giacomo and in general of Ascoli is the use of travertine (from local quarries), a white/yellowish limestone which was employed in many Roman monuments. 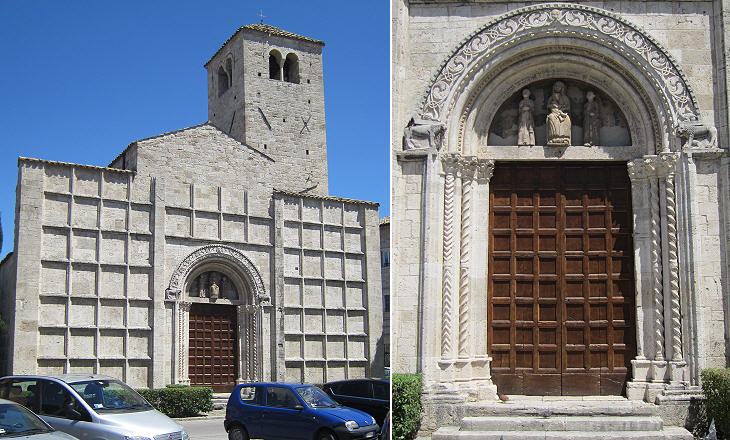 The façade of this old medieval church was redesigned in 1389. Its 64 square partitions housed frescoes depicting episodes of the Old and the New Testament, so that the church was known as the Bible of the Poor. The design of the façade is rare, but not unique and it was inspired after that of S. Rufino, the Cathedral of Assisi. 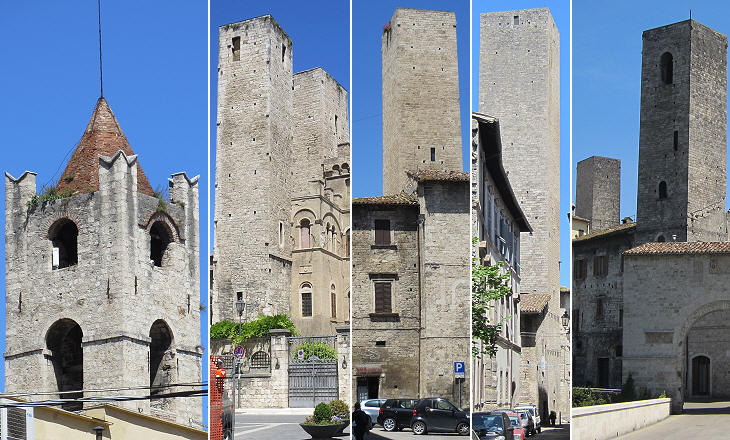 The height of the medieval towers of Ascoli show that the town, although being located next to highly seismic areas has not been hit by major earthquakes. St. Emidio, the patron saint of Ascoli, is known for protecting against earthquakes. In the early XVIIIth century, after a 1703 earthquake which struck the region, but spared Ascoli, the inhabitants of the town dedicated to him a very special church. 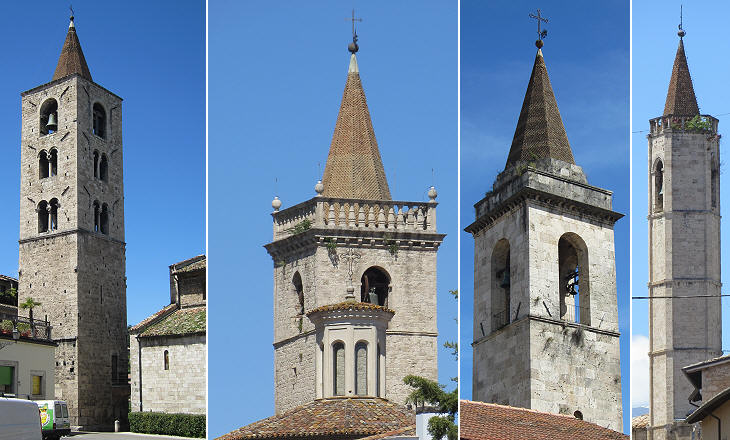 Ascoli has bell towers of different periods and styles, but almost all of them end with a spire. The two bell towers of S. Francesco (XVIth century) are of a rather unique pentagonal shape and are so tall in respect to their base that they resemble an Ottoman minaret.