... quos frigida misit Nursia. And the cold Nursians (come to close the rear of the army). Virgil - Aeneid - Book VII

The hollow of Norcia

Six miles further, near the source of the Nar, is Norcia, the ancient Nursia. Here Vespasia Polla, mother of the Emperor Vespasian, was born. (..) Far more interesting natives of Norcia were Sts. Benedict and Scholastica. The place is said to be dangerous from the brigand-tendencies of its population, and it can scarcely be reached in winter from the snow.
Augustus J. C. Hare - Days Near Rome - 1875.
The Italian peninsula enjoys mild winters, but the hollow of Norcia is very remote from the Tyrrhenian Sea and a range of high mountains which reaches 7,600 ft to its east minimizes the impact of the Adriatic Sea (you may wish to see a map showing the location of Norcia in the introduction to this section). 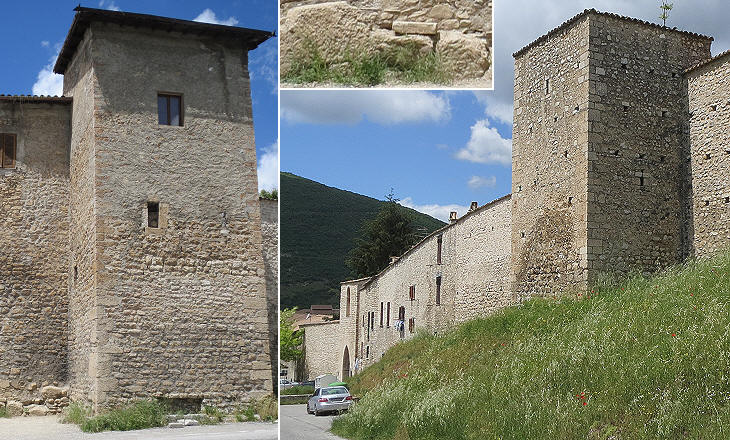 ((left) A tower showing some large stones in its lower part; (right) section of the eastern walls. The image used as background for this page shows a relief depicting a rampant lion, the symbol of Norcia, on one of the towers

Ancient Norcia was located at the northern edge of the territory of the Sabines, a tribe who was given Roman citizenship in the IIIrd century BC. Norcia has an almost rectangular shape which is typical of Roman towns. Its medieval walls were built on the site of the ancient ones and here and there some large stones can be seen at their base.

Today Norcia has half the inhabitants it had in 1861 and this explains why its gates have not been enlarged. They were very simple ones and were not protected by flanking towers. The central section of Porta Ascolana was built in the XVIth century. In summer a road across the mountains allowed communication between Norcia and Ascoli, a larger town in the Marche region. 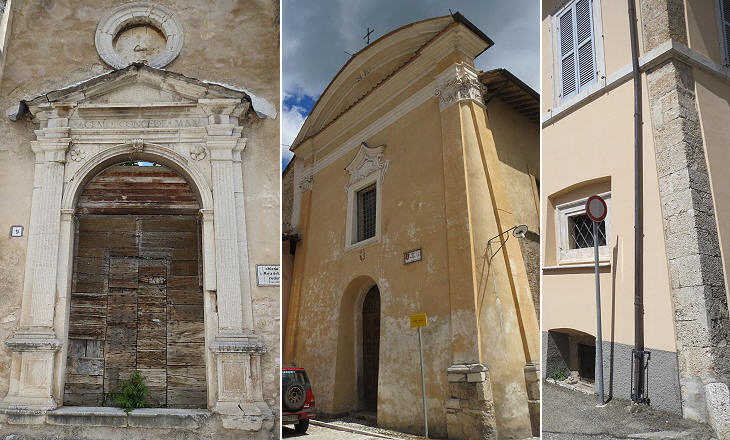 Effects of the earthquakes: (left) S. Maria della Pace, the interior of which has not been rebuilt; (centre) S. Giovanni; (right) detail of a small palace

The urban landscape of Norcia is a consequence of the many earthquakes which struck the town through the centuries. In particular the medieval town was hit in 1324, the Renaissance one in the XVIIIth century and in 1859 nearly 90% of the buildings were severely damaged. For this reason Norcia has no high bell towers and in some cases the walls of churches and houses have a tapering structure which increases their stability. 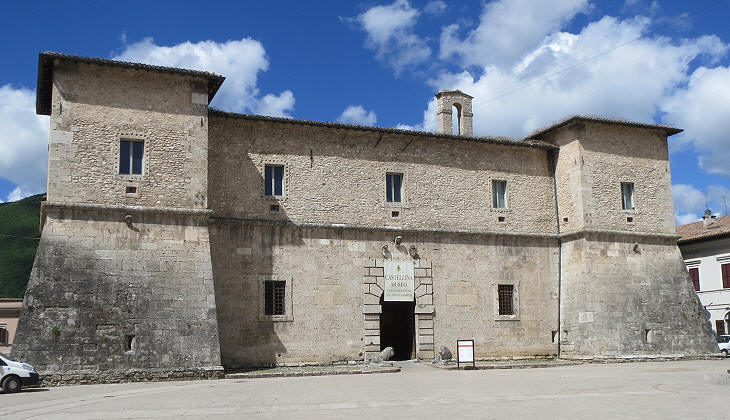 The residence of the papal governors in the very centre of Norcia was commissioned by Pope Julius III to Vignola, a leading architect who designed Villa Giulia and Palazzo Farnese di Caprarola, in 1554. The building has the aspect of a small fortress, rather than of an urban palace, because fortresses had shown to better withstand the impact of earthquakes (and to grant greater protection to the governors in case of riots). 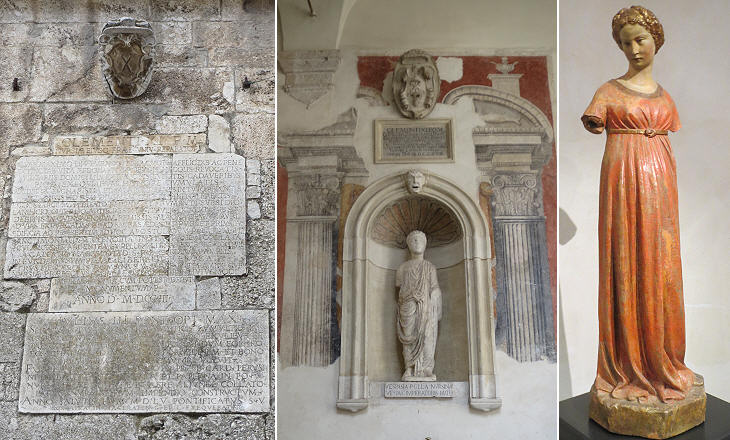 Notwithstanding its solid appearance the palace/fortress required repairs which are listed in a series of inscriptions. Today the building houses a small museum with archaeological findings and works of art of various periods donated by Evelino Massenzi in 2002. 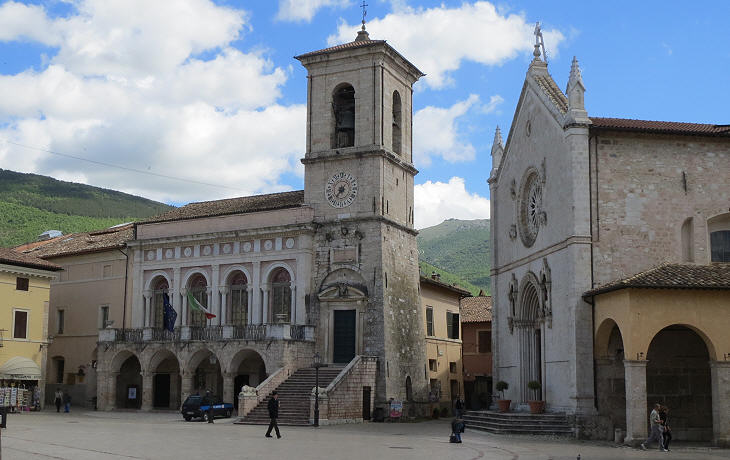 The Town Hall and S. Benedetto stand opposite the Castellina in the main (and only) square of Norcia. The loggia is a XIXth century addition. The upper portion of the clock tower and of S. Benedetto were rebuilt after the 1859 earthquake. The church stands on the assumed house of St. Benedict. He belonged to a wealthy family of Norcia and was sent to Rome to complete his education, but in 497, when he was seventeen, he retired to a cave at Subiaco, where he lived as a hermit for three years and where eventually he founded the first of a series of monasteries. 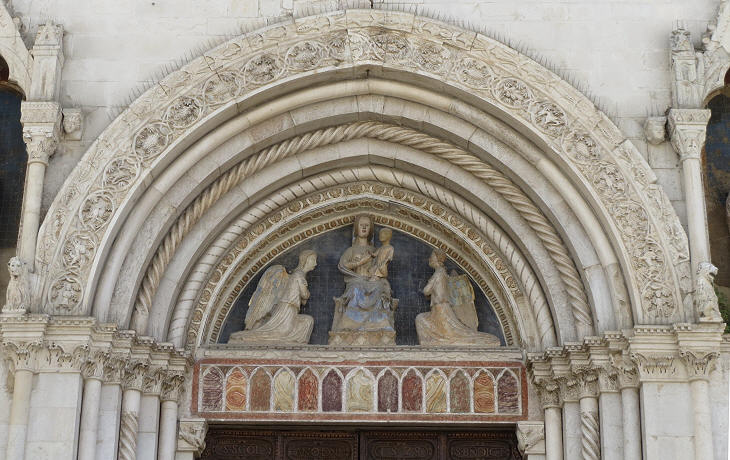 The elaborate portal was built in 1389. It was damaged by earthquakes, but it was always carefully repaired. Overall the façade of S. Benedetto retains its medieval aspect, something which cannot be said for the interior. The portal is almost semi-circular (height equal to half the width) whereas earlier examples of Gothic portals in Umbria (as at Foligno) were more pointed. 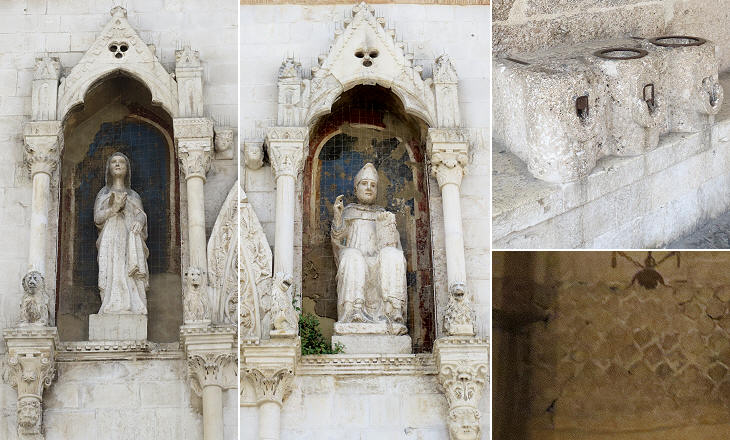 S. Benedetto: (left/centre) niches with statues of St. Scholastica and St. Benedict; (right-above) measures for grains in the side portico; (right-below) "opus reticulatum" in the crypt, the supposed house of St. Benedict

St. Benedict is the patron saint of the town and the community of inhabitants of Norcia who lived in Rome dedicated a small church and an adjoining hostel/hospital to him and to St. Scholastica, his sister, who followed him at Subiaco where a very interesting convent is named after her. 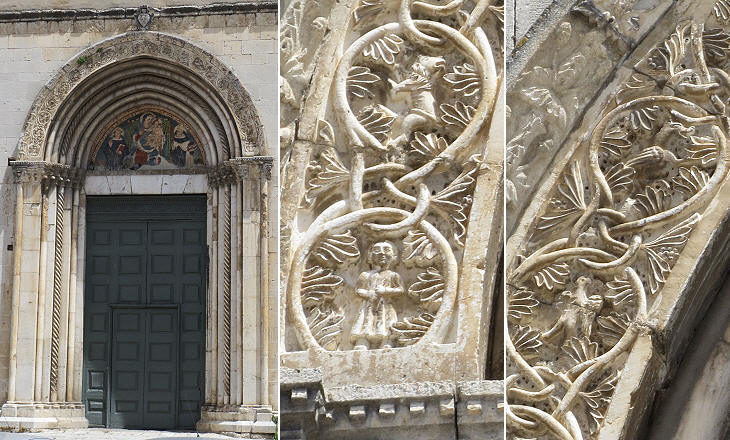 S. Agostino: portal and details of its frieze

Acanthus scrolls were a common decorative pattern which was used throughout the Roman Empire. In particular during the IInd century AD these scrolls were enriched by adding animals and figures (see examples in a relief at S. Saba in Rome and in a mosaic at Philippopolis in Syria). The portal of S. Agostino was decorated with a very simple attempt to imitate these scrolls. 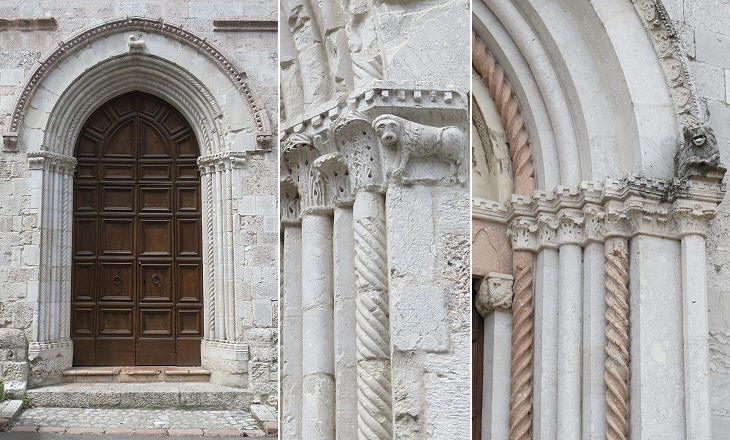 S. Francesco is a deconsecrated church which retains two elaborate portals in one of which the pink stone of Mt. Subasio near Assisi, the town of St. Francis, was utilized. Today it is used as a conference and concert hall where I found the painted musical rest shown in the icon of this page. It was pointed out to me that Dixit Dominus Domino Meo is written on a five-line staff, rather than on a four-line staff which is typical of Gregorian chant. 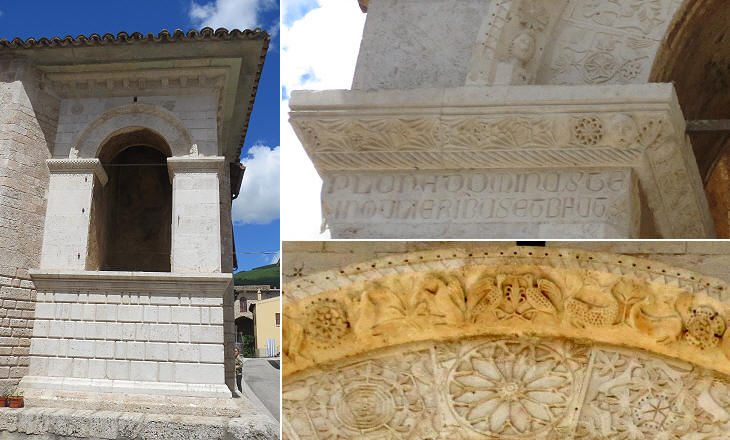 Tempietto and details of its decoration

Tempietto is a small building of which we know the date of construction (1354) and the name of the artist who designed it (Vanni della Tuccia), but not its exact purpose. Perhaps it was an ex-voto built to celebrate the end of the Black Death, a major pestilence which spread over Europe in 1348-1350. The overall appearance gives the impression of a Renaissance architecture, but the decoration is typically medieval, although such a low relief is unusual. 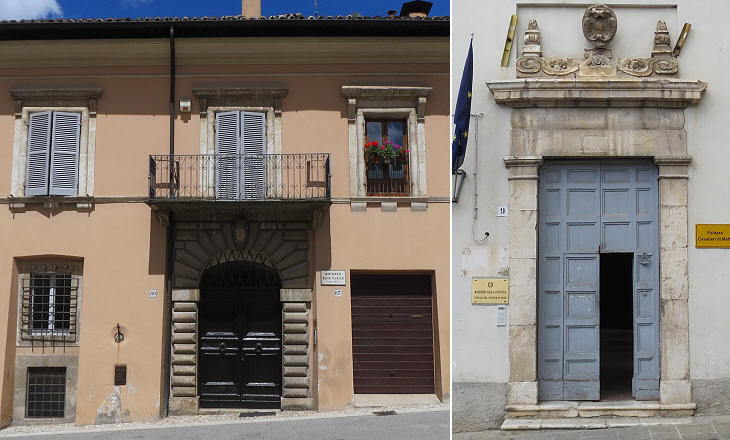 The wealthy families of the provincial towns of the Papal State decorated their houses with very large and elaborate portals (see examples at Orvieto), but those of Norcia could not do so because their palaces had only two storeys. 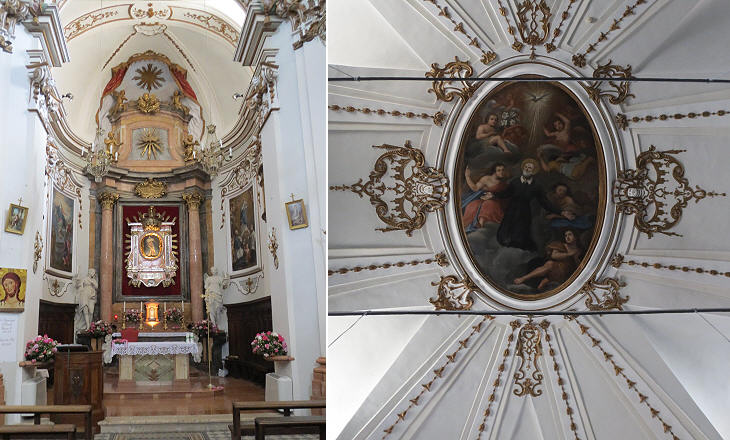 While the façades were not dramatically affected by the earthquakes, the interiors of the churches suffered severe damage because of the collapse of the roofs. In many of them some new chapels and altars were built, but S. Filippo is the only church of Norcia which has a consistent XVIIIth century decoration based on Roman patterns. 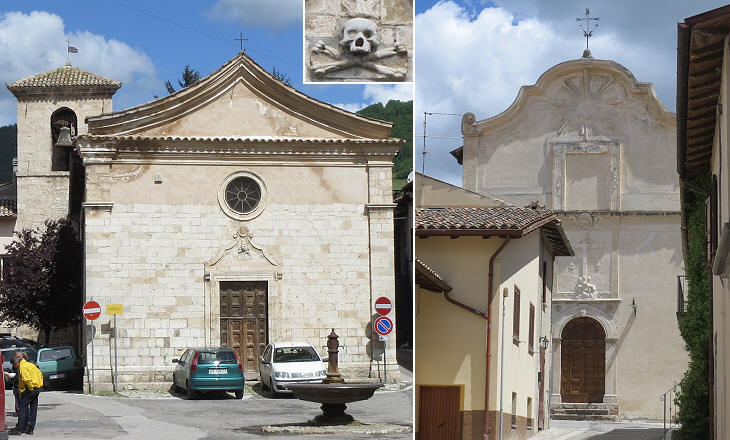 In some minor medieval churches belonging to brotherhoods the upper part of the façades was rebuilt after the XVIIIth century earthquakes according to the fashion of the time, including some gruesome details (for more on this topic see Memento Mori, a page on the symbols of Death in Rome).

In order to improve their meagre diet, the peasants around Norcia used the large quantities of acorns available in the woods around the town to feed pigs. They eventually acquired skills in the production of ham, sausages and salami which were sold in Rome in shops opened by other inhabitants of Norcia. Even today in Rome norcino is a synonym for butcher. 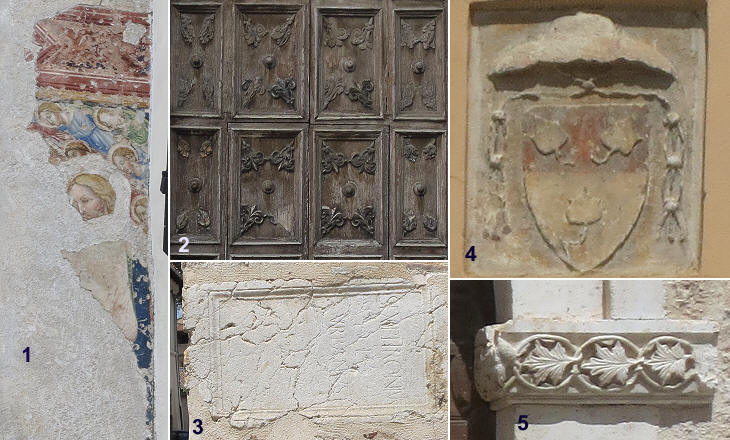 Details: 1) fragment of a fresco at S. Caterina; 2) wooden door at S. Caterina; 3) Roman funerary inscription on the wall of S. Lorenzo; 4) coat of arms of a bishop near S. Giovanni; 5) detail of a portal near Tempietto