- Civitanova and the Chienti Churches
(View from the walls of Ripatransone) 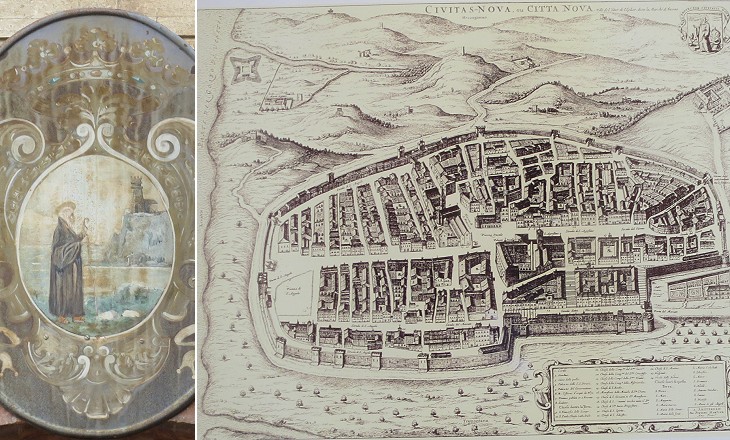 (left) An old coat of arms of Civitanova when it was a Duchy: it depicts St. Marone, a Ist century Christian martyr and patron saint of the town, and a castle at the top of a rock by the sea; (right) 1724 plan of the town by Pierre Mortier (published in 1782)

Civitanova means "New Town", although today Civitavecchia (Old Town) sounds more appropriate because of its historical monuments and overall aspect. It was however a new town for the inhabitants of Cluana, a port at the mouth of the River Chienti, who fled to this hill in the Vth century when the Visigoths ravaged the region. The view by Mortier shows a small fortress in the left upper corner; it was built in the approximate location of ancient Cluana.
The pendulum of history swings and today Porto Civitanova, the settlement by the sea has ten times as many inhabitants as Civitanova Alta, that on the hill. 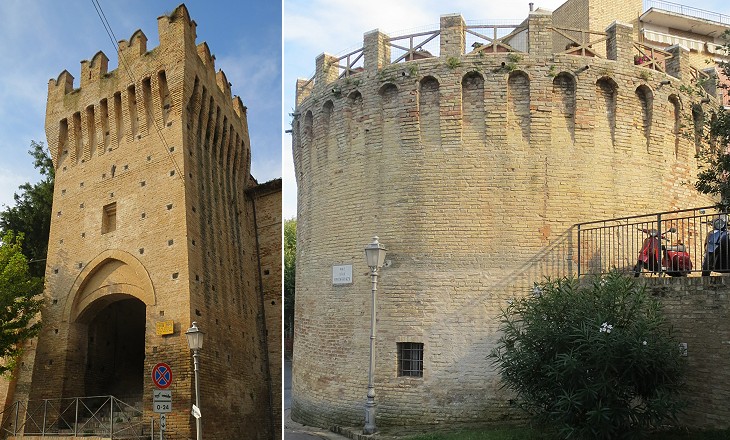 In the XIth century the inhabitants of Civitanova acquired a degree of self-government. The port at the mouth of the Chienti was reactivated and it helped the economy of the town. It eventually attracted the attention of other, more powerful towns and of the families who ruled them. The Malatesta of Rimini, the Sforza of Pesaro and the Varano of Camerino in turn took possession of Civitanova. In the XVth century the Sforza strengthened the fortifications of the town by building a new curtain of walls and some round bastions. 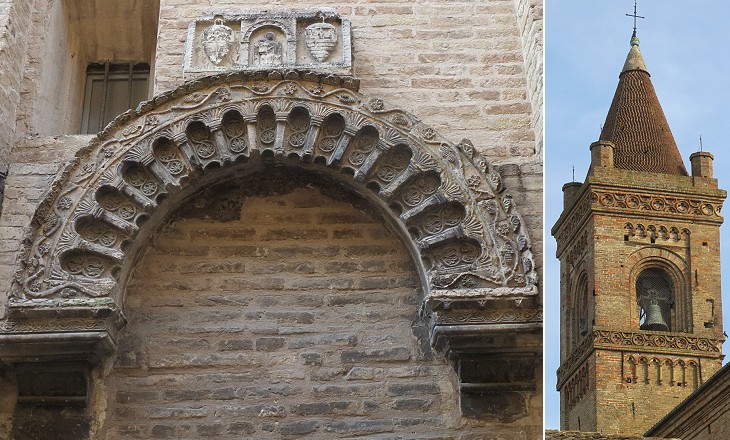 The church was built in the XIIIth century and it was dedicated to St. Anthony. In the XVIIIth century it was entirely redesigned and its dedication was changed. It retains its original portal and the bell tower. Their rich decoration is an indication of the wealth of the little town. 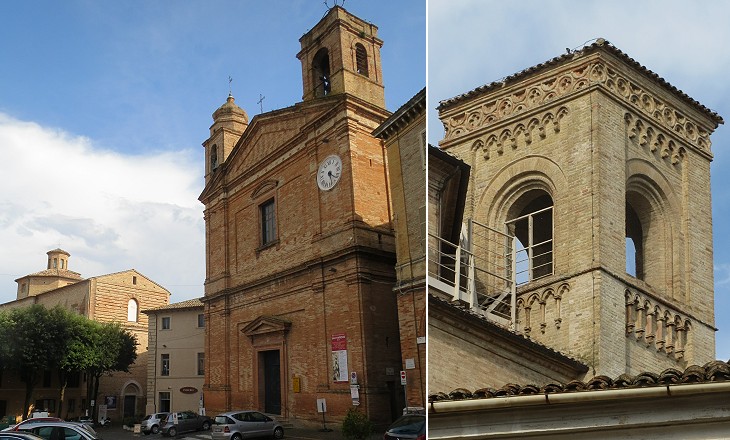 (left) S. Paolo (redesigned in the XVIIIth century) in the foreground and S. Francesco in the background; (right) bell tower of S. Francesco

In 1528 a major pestilence struck the region and at Fermo, Matelica and other neighbouring towns, churches were built to celebrate its end. The population of Civitanova was significantly reduced. A few years later the condition of the town worsened because of the alliance between Sultan Suleyman the Magnificent and local rulers in Tunisia and Algeria. Ottoman corsairs mainly raided the Italian coasts on the Tyrrhenian Sea, but occasionally they ventured into the Adriatic one, especially after a Christian fleet had been defeated near Preveza in 1538.
In 1551 Pope Julius III "leased" a much impoverished Civitanova to Giuliano Cesarini, a member of a noble Roman family, who at the time was governor of Orvieto. In 1564 he bought the fiefdom of Civita Lavinia from the Colonna and that of Genzano from the Massimo. His grandson was eventually given the title of Duke of Civitanova. The Cesarini (Sforza Cesarini after the marriage of Livia, the last of the Cesarini with Federico Sforza in 1673) retained their feudal rights over the citizens of Civitanova until 1817 when these were abolished by Pope Pius VII. During their rule they emphasized the urban aspect of Civitanova by enlarging its main square where they built their palace, by straightening some of its streets and by renovating some of its churches. 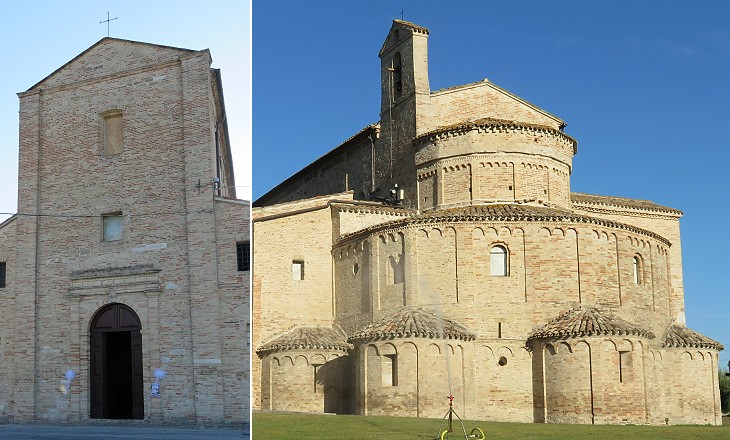 S. Maria a Piè di Chienti ("a Piè di" means at the foot of, but in this case at "the mouth of"): (left) plain XVIIth century façade; (right) apse; the lower section retains its XIIth century design with radiating chapels (you may wish to see another image of the church in the introductory page or the radiating chapels of Saint-Sernin, a Romanesque church at Toulouse)

The valley of the River Chienti was abandoned in the VIth century as a consequence of the wars between the Byzantines and the Ostrogoths/Longobards. It became marshy and unhealthy, but in the IXth century monks from Abbazia di Farfa settled there and built a fortified abbey. The Abbots of Farfa can be regarded as feudal lords and they did not hesitate to go to war to enlarge their possessions. During the Investiture Controversy they sided with the German Emperors, but in 1122 they were let down by Emperor Henry V who acknowledged the right of the Pope to appoint the Abbots. In the XIIth century the church of S. Maria a Piè di Chienti was redesigned, most likely by or with the advice of French Cistercian monks (who in 1142 founded another abbey at nearby Fiastra). 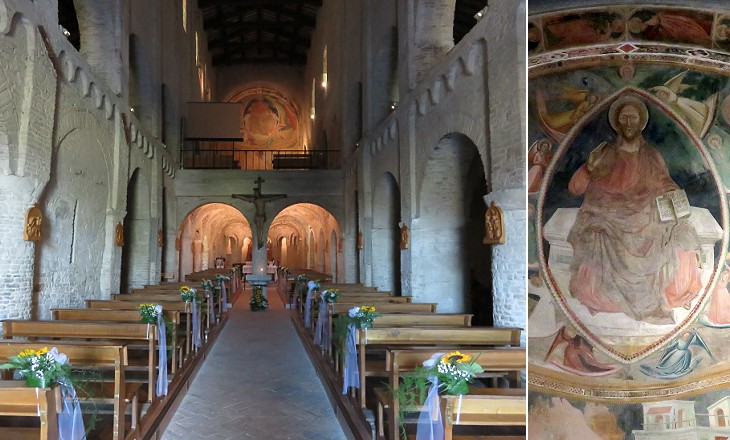 The interior of the church was redesigned in the late XIVth century when the main altar was moved to a new, upper section which was decorated with frescoes shortly after its completion. The change was most likely due to some initial construction defects. At first sight the end of the lower church seems a crypt, but it never was. 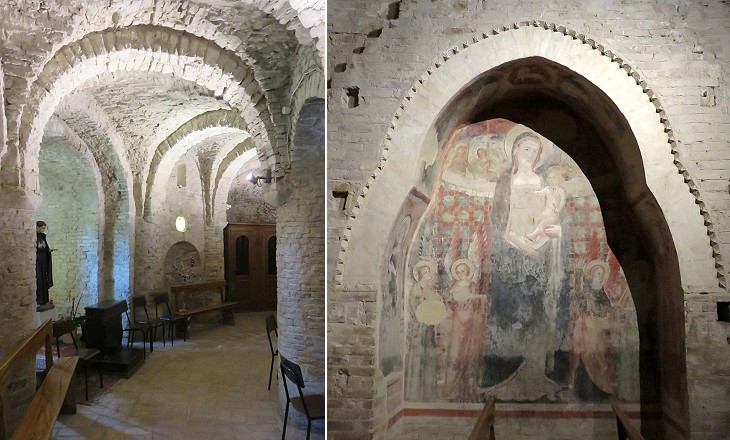 S. Maria a Piè di Chienti: (left) ambulatory with chevets (radiating apse chapels in the lower church); (right) fresco in a niche in the upper church

The Abbey continued to belong to Farfa until 1477 when Pope Sixtus IV assigned it to S. Maria della Pietà, the hospital of Camerino. The defensive walls which surrounded the church and the other buildings of the Abbey eventually vanished. The additions made after the XIVth century have been removed to highlight the medieval structure and decoration of the church. 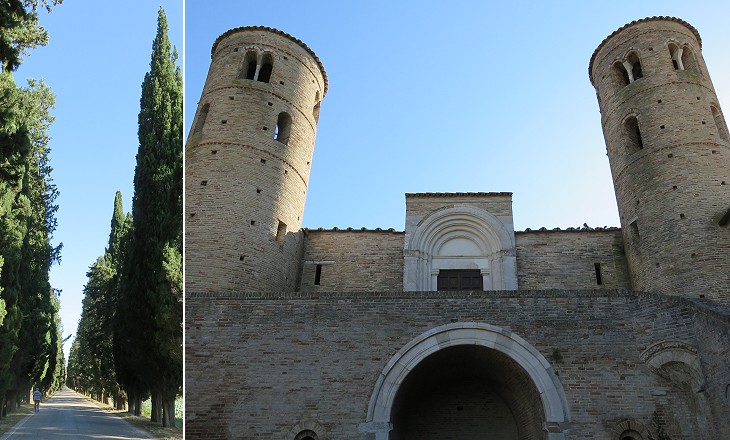 This isolated church, which is not associated with an abbey, is situated some five miles west of S. Maria a Piè di Chienti, very near Madonna delle Vergini of Macerata. The lack of historic records makes it difficult to piece together the phases of its construction. The presence of some ancient materials suggests it stands on the site of a Roman villa. The current building is dated late XIth/early XIIth century. 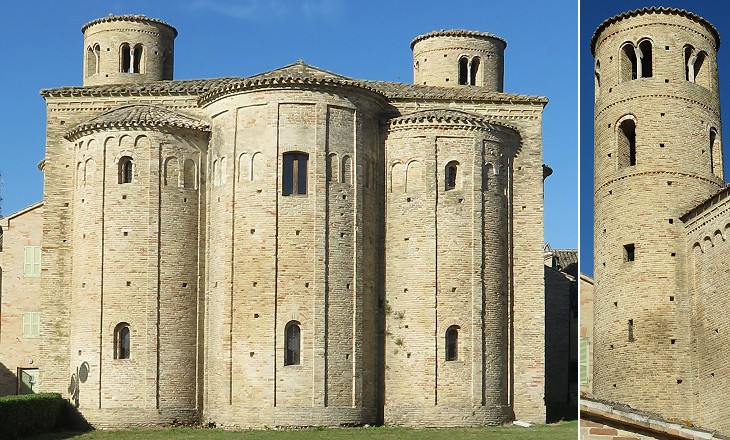 The plan of the church is square and there is no internal communication between the lower and the upper church, although the design of the three apses would suggest otherwise. Medieval square churches adjoining a palace and/or used as a mausoleum can be found in Germany, whereas the three apses are usually regarded as typical of Byzantine architecture. The bell towers recall those at Ravenna. Art historians do not agree on the origin of the design of S. Claudio al Chienti, but the ordinary visitor is amazed by its unusual overall aspect. 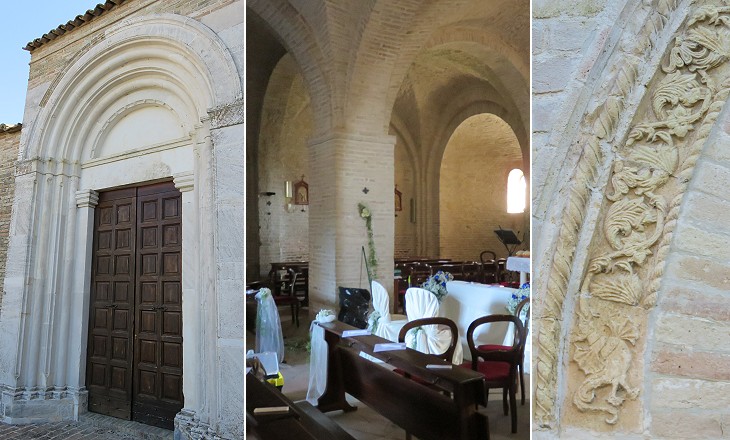 S. Claudio al Chienti: (left) portal of the upper church; (centre) lower church (similar to S. Maria a Piè di Chienti, it is a favourite wedding venue); (right) detail of a side portal

There are three early IVth century martyrs by the name of Claudius. They lived in Spain, Pannonia (today's Hungary/Serbia) and Turkey. The church was dedicated to St. Claudius from Pannonia; he is worshipped with three other companions at SS. Quattro Coronati in Rome.
The image used as background for this page shows a detail of the portal at S. Francesco in Civitanova.