In the traditional partition of Rome into rioni, the area around Monte Testaccio was included in Rione Ripa. It only became a separate rione in 1921, in recognition of the large increase of its population. The meadows around the ancient Roman dumping ground were chosen by town planners for the development of a new quarter aimed at providing an inexpensive accommodation to citizens belonging to the working class, in part expelled from their homes in the more central rioni, in part coming from other parts of Italy. 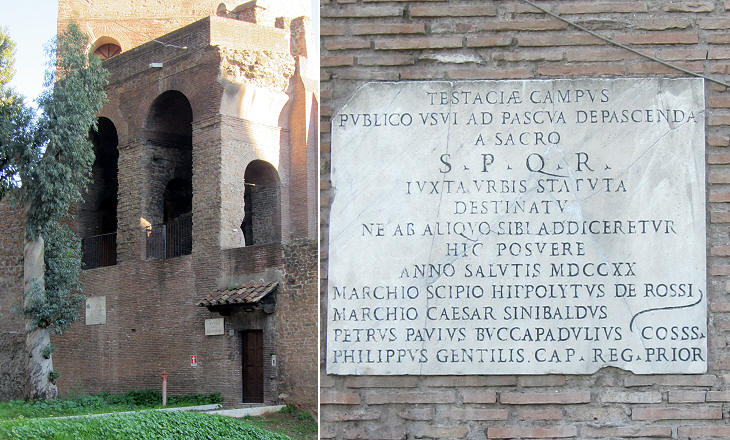 1720 inscription at Porta S. Paolo stating the public use of the meadows around Monte Testaccio

In the pleasant meadow wherein the mount Testaceus lies, the Romans were wont of old to keepe their Olimpike games.
Fynes Moryson - An Itinerary: Containing His Ten Years Travel Through .. Italy (in 1594)
A net of perpendicular streets with large, tall buildings replaced the meadows which had seen some of the most popular aspects of the Roman carnival, including bullfights. Outside the carnival period the meadows were used for pasturing cattle and sheep. A 1720 inscription at Porta S. Paolo reads: Testaciae Campus publico usui ad pascua ... (the fields of Testaccio - are devoted - to the public use for pasturing ..). For this reason the meadows were called Prati del Popolo Romano (to distinguish them from Prati di Castello). 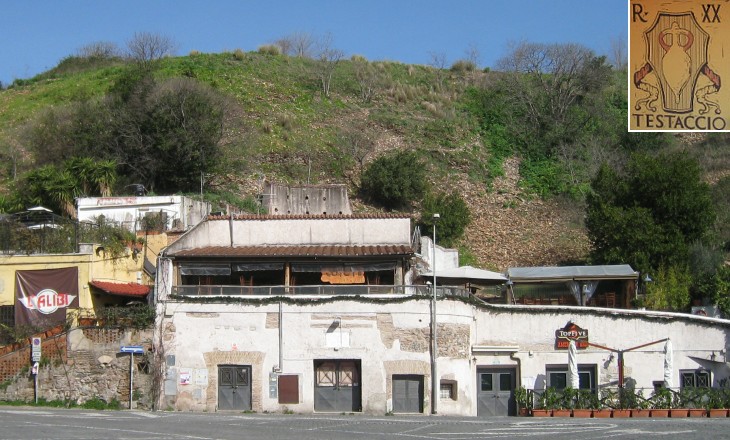 Former stables and cellars around Monte Testaccio; (inset) the symbol of the Rione

Monte Testaccio, with its excavated caverns housing rowdy wine bars and stables, was not touched by the development of the new quarter and its inhabitants were proud of the new rione symbol, a testae, the amphorae used by the ancient Romans to contain wine and oil. 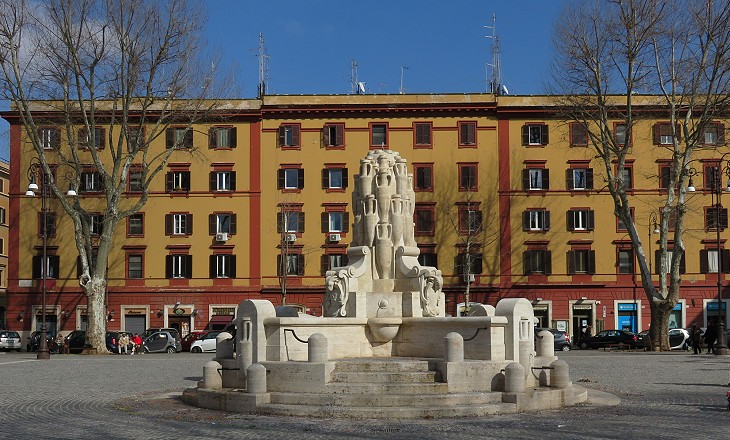 Monte Testaccio is entirely composed of fragments of broken earthenware coming from the large horrea (warehouses) next to the river harbour where the immense provisions of commodities required by Ancient Rome were unloaded.

1870 inscription on the river bank and modern fountains

In 1870 Pope Pius IX celebrated with an inscription near the river the first excavations in the area: it is most likely the last inscription he placed in Rome, because in that same year the city was conquered by the Italian troops. The sarcophagus is a 1940s addition when the street along the river was redesigned. Several modern fountains of Testaccio make reference to the symbol of the rione.

Fragments of Roman stones, capitals, Roman walls in the halls and courtyards of modern buildings

In addition to fragments of pottery, the ground of the former meadows covered other memories of Ancient Rome; this explains why several modern buildings of Testaccio display minor decorative elements and parts of Roman walls. Also S. Maria Liberatrice, the parish church of Testaccio is in a way linked to Ancient Rome: it bears the name of a church in the Roman Forum. 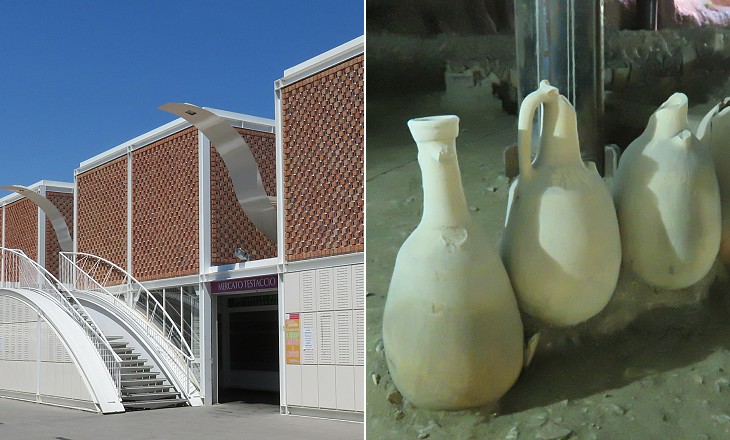 Findings during the excavations of a modern marketplace have revealed that not all the pottery containers were thrown away. Some of them were used by masons to lighten the weight of vaulted roofs (as at Circo di Massenzio) or to make opus signinum, a building material made up of pottery broken into very small pieces and mixed with mortar. It was named after the town of Signia. It formed a cement which was used for floors and surfaces which needed to be waterproofed. Archaeologists believe they found the warehouse of an opus signinum factory. 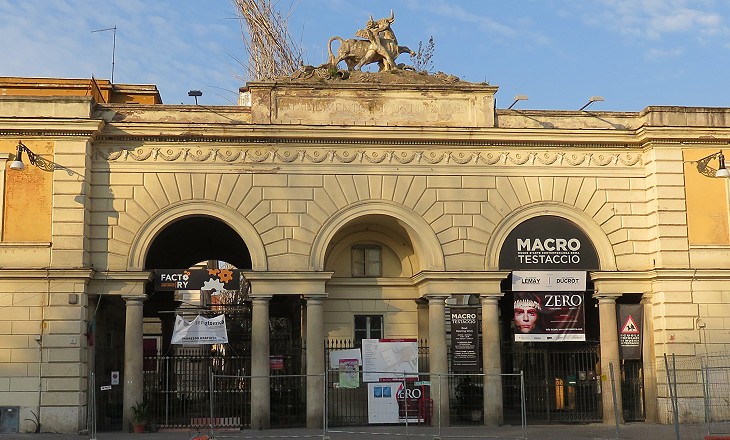 Testaccio is best known by Romans because of its distinctive style of cooking, rather than because of its broken pottery. Between 1888 and 1891 a modern slaughterhouse and a cattle market were built between Monte Testaccio and the river. Scraps from the slaughtering process were taken home by the workers, most of whom lived in the new quarter or given for free to the owners of the inns who catered for porters and drivers who for business reasons came to the slaughterhouse. Over time some recipes became broadly popular and today, even though the slaughterhouse was relocated elsewhere in 1975, the restaurants of Testaccio are popular among the Romans who dine out (which they do quite often). 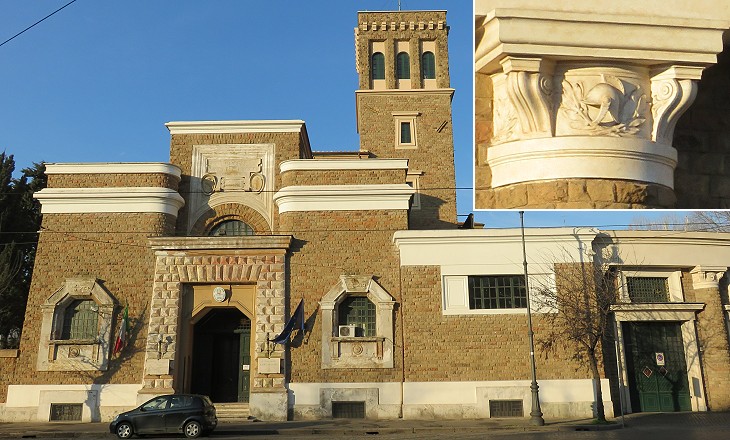 Testaccio has some interesting examples of the architectural trends prevailing in Rome during the Fascist period (1922-1943). This Fire Station was designed by Vincenzo Fasolo and it was completed in 1929; it assembles elements of classic and medieval styles, with even a touch of Ancient Egypt in the design of the portal and the window of the tower (which is shown also in the image used as background for this page). 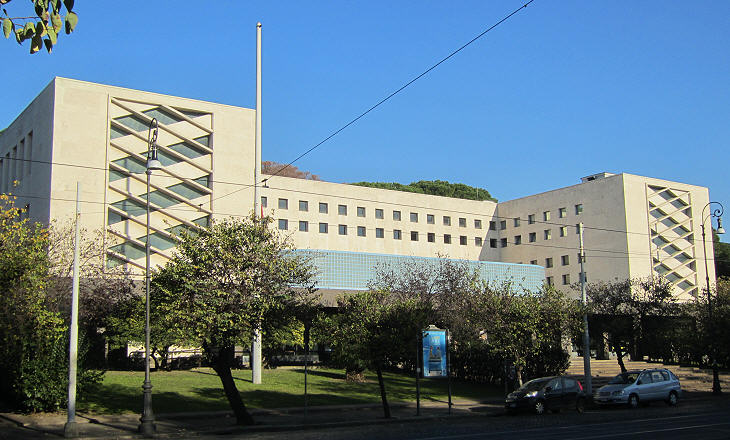 The members of the commission appointed by the Post Office to choose the winning projects for 4 new post offices to be built in new quarters of Rome, had very different views from those who chose the project for the fire station. The Post Office of Testaccio was designed by Adalberto Libera and Mario de Renzi in 1933-1935 and it shows the development of a new "rational" architectural style which eventually characterized some large buildings of E.U.R., a new quarter of Rome.

Many foreign travellers visit the Protestant Cemetery of Rome in Testaccio attracted by the accounts written by Boswell, Goethe, Henry James, Howells and others. Few of them know that across the street some 500 soldiers and officers belonging to the countries of the British Commonwealth rest in peace. They were buried in a piece of land next to the ancient walls, which was donated by the City of Rome. Approximately 50,000 Commonwealth soldiers fell in the WWII Campaign of Italy.

Testaccio offers a fine view over the southern flank of the Aventine hill and in particular over Bastione della Colonnella, a fortification built by Antonio da Sangallo at the request of Pope Paul III, who had in mind to strengthen and redesign the walls of Rome (see also Bastione del Sangallo).
The large medieval looking church shown above is part of a large Benedictine monastery built between 1892 and 1896 on a piece of land donated by the Knights of Malta.