Battisterio Lateranense
(Vasi at work in the Grand View of Rome)

The page covers:
The plate by Giuseppe Vasi
Today's view
The Baptistery (aka S. Giovanni in Fonte) 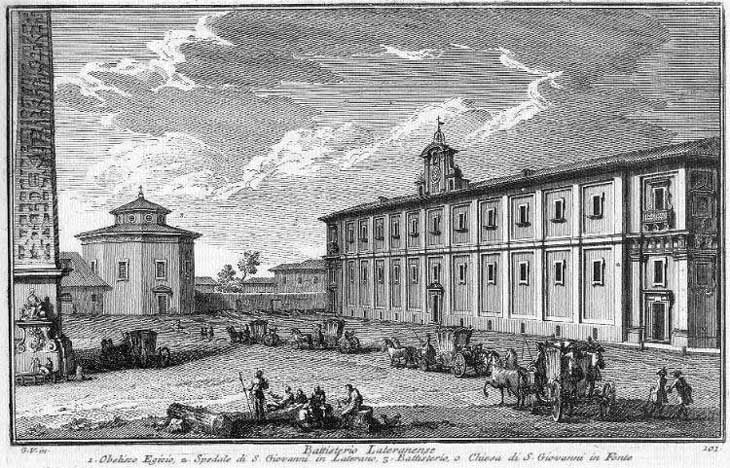 This is one of three views of Piazza di S. Giovanni in Laterano by Giuseppe Vasi; the others are in plate 34 (named after the piazza) and in plate 172 (Spedale di S. Giovanni). The subject of this plate is the Baptistery, but Vasi took the opportunity for showing the hieroglyphs of the obelisk and a view of the Men's Ward of the hospital.
According to tradition S. Giovanni in Laterano had been the first parish church of Rome. Vasi had depicted the Basilica in Book III so he dedicated a view to the Baptistery in his introduction to the Parish Churches of Rome in Book VI.
The view is taken from the green dot in the small 1748 map here below. In the description below the plate Vasi made reference to: 1) Obelisco Egizio; 2) Spedale di S. Giovanni; 3) Battisterio. 1) and 2) are shown in detail in other pages. The small map shows also 4) the location of Roman baths which were found inside some old buildings in 1936.

In the XVIIIth century Piazza S. Giovanni in Laterano was a busy place only during Possessio, the ceremony by which a newly elected pope took possession of his charge as Bishop of Rome.
The monuments shown by Vasi have not been modified, but in 1936 the opening of a new road between the Baptistery and Spedale di S. Giovanni revealed that some houses incorporated the remains of ancient (private) Roman baths. 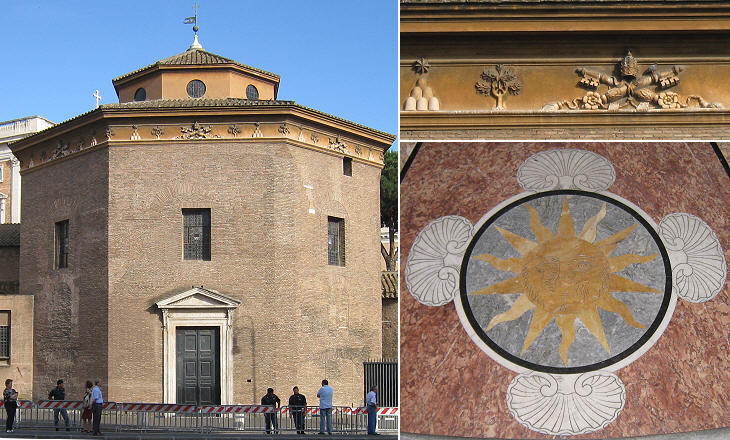 For centuries the main entrance to the Baptistery was from the opposite side: it was preceded by a Vth century small portico with two porphyry columns. In 1575, in the frame of the redesign of the whole Lateran area, Pope Gregory XIII opened an entrance from the square; it was the beginning of a series of modifications to the building which lasted for almost a century until they were completed by Pope Alexander VII in 1667.

(left) View of the Baptistery and of a hall of ancient Roman baths; (right) small fountain adjoining the Baptistery (it is decorated with the heraldic symbols of Pope Clement VIII)

According to tradition the Baptistery was built by Emperor Constantine and it probably had a circular shape which was turned into an octagon in the Vth century. The octagonal shape can be seen also in two baptisteries of Ravenna, that of Neon and the Arian one and in many other baptisteries, including medieval ones, e.g. at Ascoli. According to Liber Pontificalis, a medieval chronicle of the lives of the popes, the Baptistery was provided with facilities for administering baptism by immersion. The official name of the building was S. Giovanni in Fonte (spring/fountain). 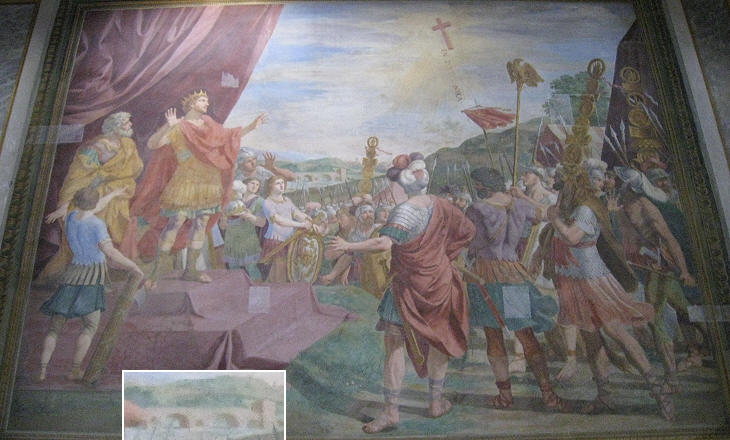 The Vision of the Cross before the Battle of Ponte Milvio by Giacinto Geminiani in the Baptistery Hall; (inset) Ponte Milvio

Throughout the Middle Ages Emperor Constantine was regarded as almost the co-founder of the Church; during the Renaissance his historical role was shadowed by interest and admiration for his predecessors, chiefly Emperors Augustus and Trajan.
In the XVIIth century the Roman Church started to emphasize again the importance of Constantine. Pope Urban VIII promoted the decoration of the interior of the Baptistery with large frescoes depicting events of his life. The ultimate objective of these frescoes was that of establishing a symbolic link between the Emperor and the modern monarchs who fought for the Roman Catholic faith. At the time of the frescoes the Habsburg Roman Holy Emperors were trying to restore Roman Catholicism in all their domains in the course of the Thirty Years' War, one of the bloodiest conflicts in European history. 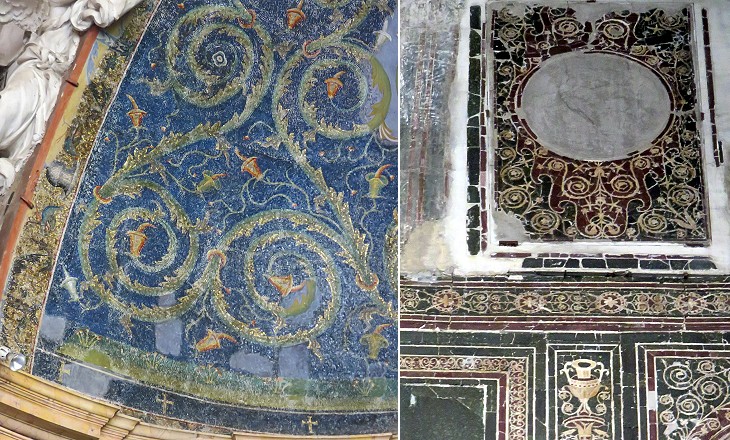 Decoration of the portico of the former entrance (now in Cappella dei SS. Cipriano e Giustina): (left) mosaics which resemble those at the mausoleum of Galla Placidia in Ravenna; (right) "opus sectile" (marble inlays)

The Baptistery was modified in the Vth century by Pope Sixtus III, the founder of S. Maria Maggiore. He embellished the building with mosaics and marble inlays of which fragments can still be seen in the former entrance (it was turned into two chapels after the opening of the new one). 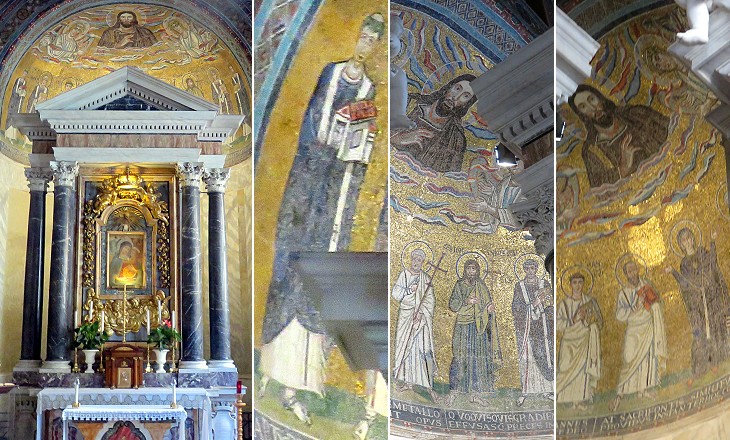 Cappella di S. Venanzio: (left) XVIIth century altar by Carlo Rainaldi; (centre/right) details of the apse mosaic including one in which Pope Theodore I shows the model of the chapel

A chapel adjoining the Baptistery Hall was built when Rome was ruled by the Byzantines by two Greek-speaking Popes: John IV (640-642) and Theodore I (642-649). The mosaic in the apse shows the two popes flanked by saints and below an image of Jesus Christ Pantocrator. The mosaic was restored in the early XIXth century. 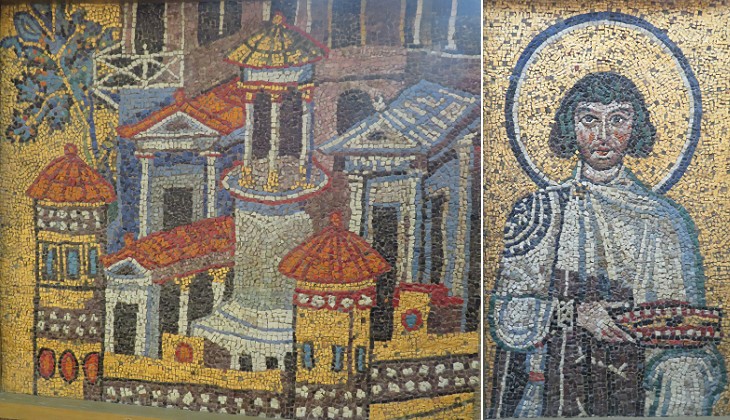 Musei Vaticani: casts of mosaics on the walls of Cappella di S. Venanzio: (left) a studded imaginary city, most likely Jerusalem with the round building representing the Holy Sepulchre; (right) St. Antiochianus, martyr of Salona; he holds a crown, symbol of his martyrdom, similar to what can be seen in mosaics of Ravenna

The reduced size of the chapel does not allow a proper view of the mosaics above the apse. Pope Theodore I decorated with mosaics also a chapel at S. Stefano Rotondo. 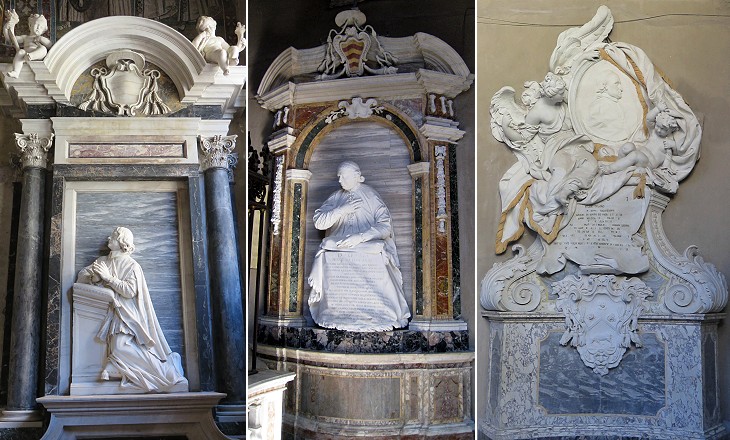 The Baptistery was regarded as a very holy place and many prelates chose to be buried there. Their monuments follow two patterns which were established by Gian Lorenzo Bernini: the dead were portrayed in the act of praying or a portrait of them was placed inside a medallion. 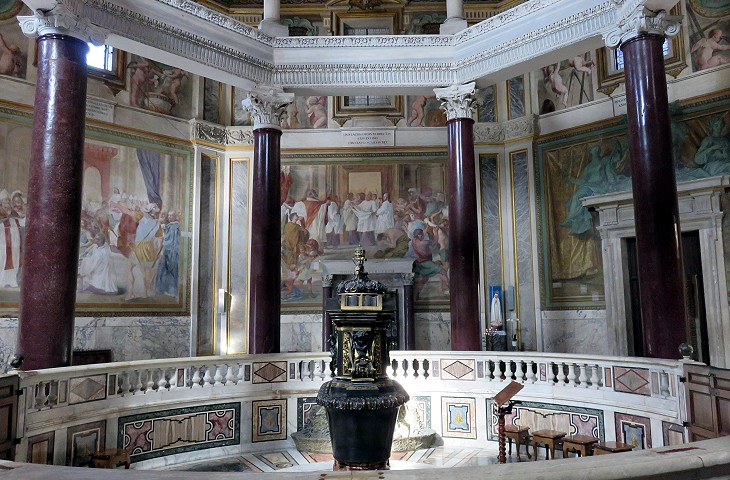 Some sources attribute to Pope Sixtus III the erection of eight porphyry columns at the centre of the Baptistery Hall. Other sources state that they were put in place by Pope Sergius III in the early IXth century. The columns support a series of ancient capitals and lintels. They are so beautiful that they were not touched by the XVIIth century redesign of the Baptistery Hall. You may wish to see some early baptismal fonts which were decorated with mosaics at Kelibia and Thapsus in Tunisia. 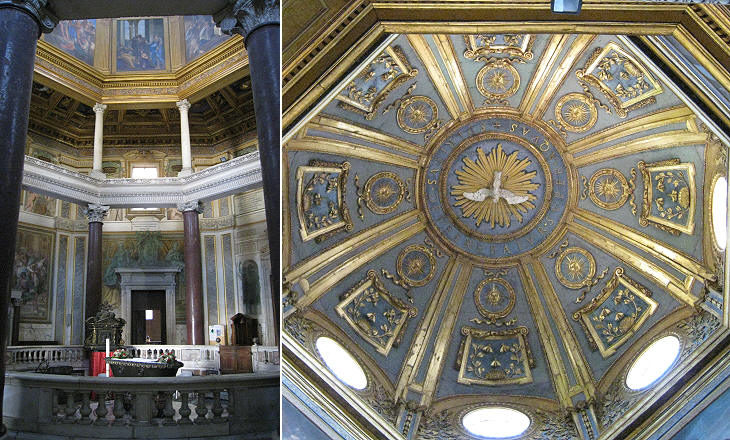 The redesign of the interior in the XVIIth century built upon the existing eight columns by adding a second tier which supported a very elaborate wooden ceiling. The octagonal shape of Battisterio Lateranense and many other baptisteries is associated with the "eighth day" being the Day of Resurrection. A long inscription (presumably dictated by Pope Sixtus III) on the lintels above the porphyry columns ends with the following words which highlighted the importance of Baptism: Nec numeros quemqua scelerum, nec forma suorum terreat: hoc natus flumine, sanctus erit (Neither the number, nor the gravity of the sins should scare anyone. Whoever was born in this river - e.g. was baptized - will be saved). 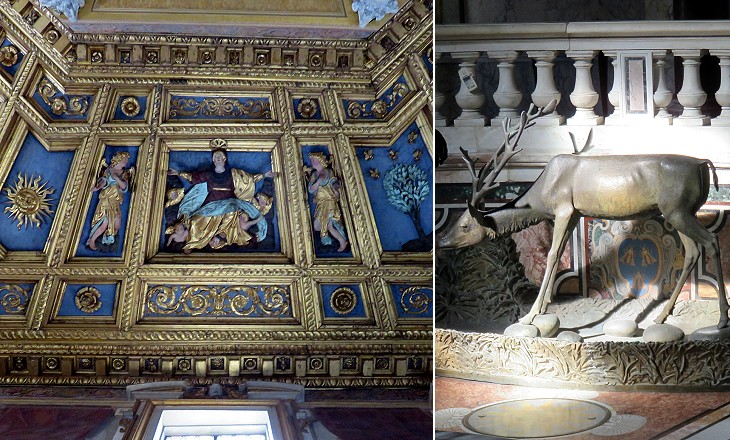 (left) Another detail of the wooden ceiling; (right) a 1970s bronze doe, a reminder of the eight silver does which according to tradition poured water into the baptismal vessel at the time of Constantine