- Lindos
(relief in the fortress of Bodrum) 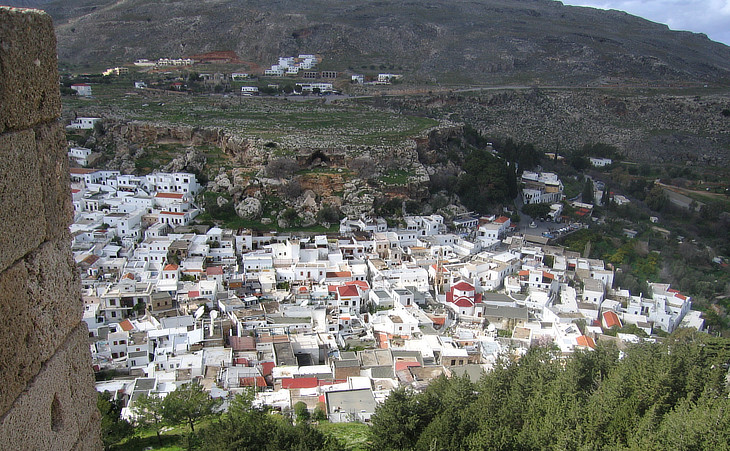 View of the town from the castle

In ascending a low height, we caught sight, first of the conspicuous castle-rock of Lindos, and shortly afterwards of the dazzlingly white buildings of the town, lying in a depression immediately beneath us. This place, which retains its ancient name, is the most striking in its position and appearance of all the cities of Rhodes. The flat-roofed town, when seen from above, lying between these, presents a peculiar appearance.
Henry Fanshawe Tozer - The islands of the Aegean Sea. Publ. 1890, but Tozer began his travels in 1874.

The castle of Lindos, however, deserves a more detailed description, because it was converted into an important stronghold by the Knights of Rhodes. It is now deserted, and the traveller can roam about there at his pleasure; but when Ross visited it in 1843, it was still occupied by a Turkish garrison, and was not allowed to be entered by strangers. The rock on which it stands rises precipitously on every side, but especially so towards the south, where it overhangs the sea at a height of 200 feet. The Knights, however, did not do things by halves, and their fortifications were carried all round the summit, without reference to the inaccessible nature of the cliffs. Tozer
Lindos is one of the most ancient towns of Rhodes and its acropolis was the site of a shrine dedicated to Athena. It is located on the eastern coast of the island on a high rock between two natural harbours. 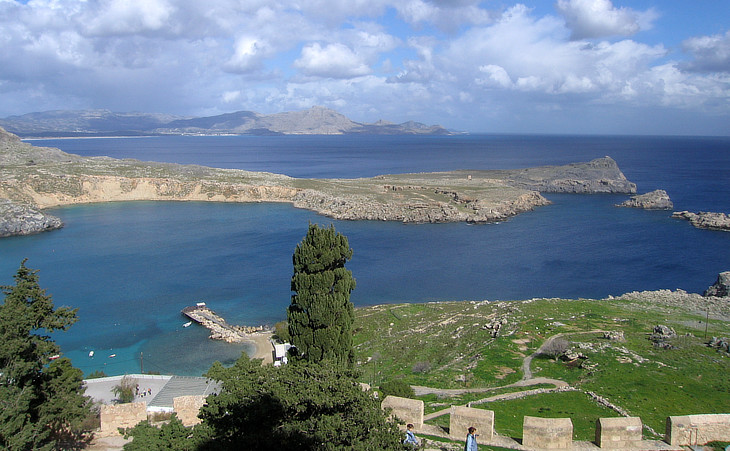 Northern harbour, most likely the commercial one

Coming opposite to Lindus, the weather being calm, the author was enabled to complete an outline of this once-favoured land, according to its bearing at the time. It embraces nearly its whole extent, from north to south: shewing the relative position of Lindus and Rhodes, and the appearance exhibited by its rough, craggy, and broken land. (..) The country immediately around Lindus is described by Philostratus as being the most rugged of the Rhodian territory. It was particularly favourable for the cultivation of the vine and the fig-tree, but ill adapted to other purposes of agriculture, and impassable for carts and waggons. From the nature of the land about Lindus, the whole island received the appellation which it bears of "the rugged Rhodes."
Edward Daniel Clarke - Travels in various countries of Europe, Asia and Africa - 1817-1824
The harbour toward the north is the larger, and is partly defended from the east wind by two islands that lie in front of it. Tozer
The nature of the ground around Lindos protected the ancient town from attacks by land and the two harbours protected its ships. 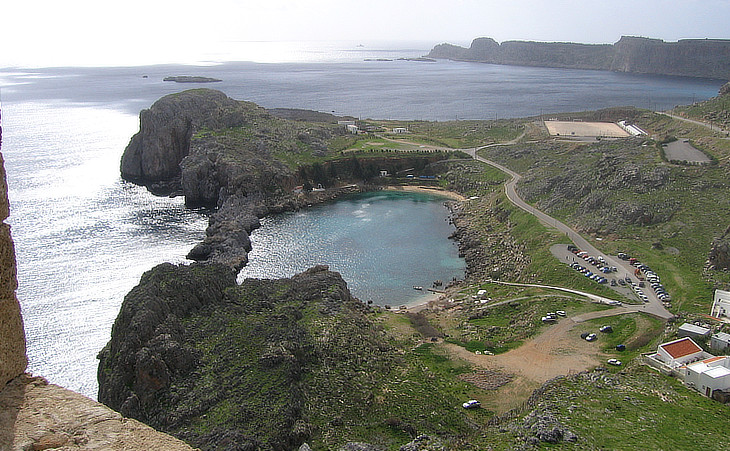 St. Paul's (or southern) harbour, most likely the military one

The southern harbour is a small basin with a very narrow entrance. (..) The classical antiquities of Lindos, which we visited this morning, are found, partly in the town itself, and partly in the acropolis above. In the southern part of the town towards the smaller harbour are the substructions of a temple, consisting of a massive wall, finely built of rectangular blocks of a closely grained limestone; half-a-dozen courses of this remain, but of the temple itself there is no trace. Tozer
The smaller harbour of Lindos is very well protected by rocks: the access is very narrow. It is thought that St. Paul stopped at Lindos on his journey to Rome and so today the harbour is named after him. 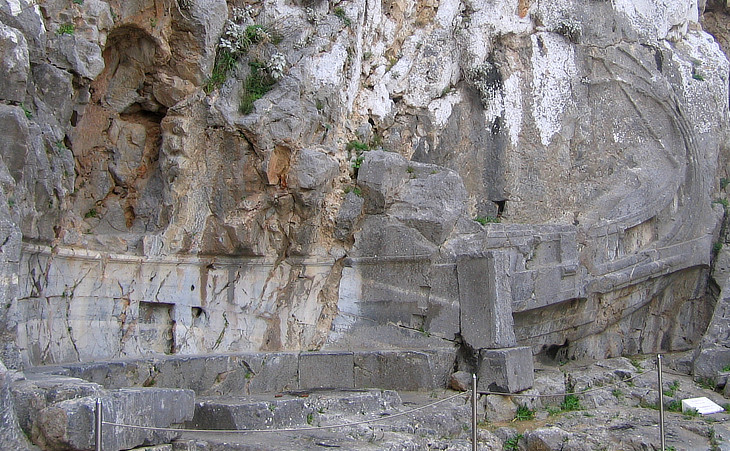 At the foot of the northern side of the acropolis is a large Hellenistic rock-cut relief representing the prow of a ship; a projecting platform carried a statue of Hagesandros, a priest to Poseidon (Neptune), dedicated by himself. The relief was enclosed within the fortress of the Knights. You may wish to compare it with a Roman sculpture of Ulysses' ship at Sperlonga. 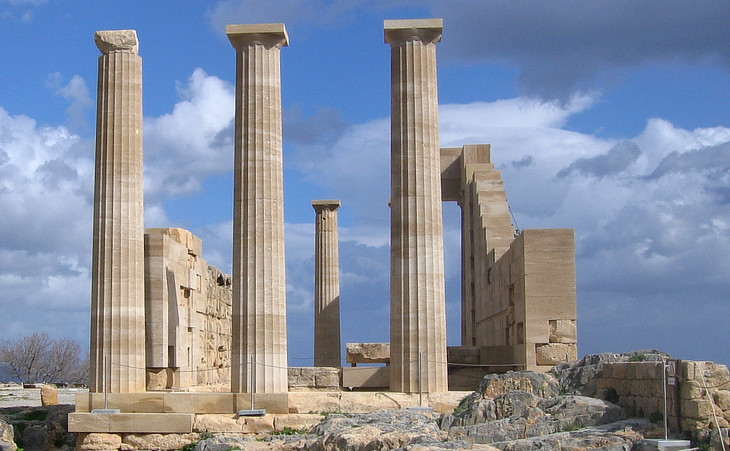 Our pilots pointed out to us the eminence on which the remains of antient Lindus are situate. The collection of rarities once dedicated in votive offerings at the shrine of the Lindian Minerva, must have rendered the temple, considered as a museum only, one of the most curious sights to which the inhabitants of Greece resorted. Vessels of antient bronze, military trophies, armour, and weapons, were frequently suspended as donatives, in their sanctuaries. Clarke
The remains of the famous temple of Athena of Lindos are situated near the highest point of the acropolis, which is at the southernmost angle; they consist of part of the wall that supported the entire building, and part of that of the cella. (..) On the summit itself there are considerable remains of Hellenic walls. Tozer 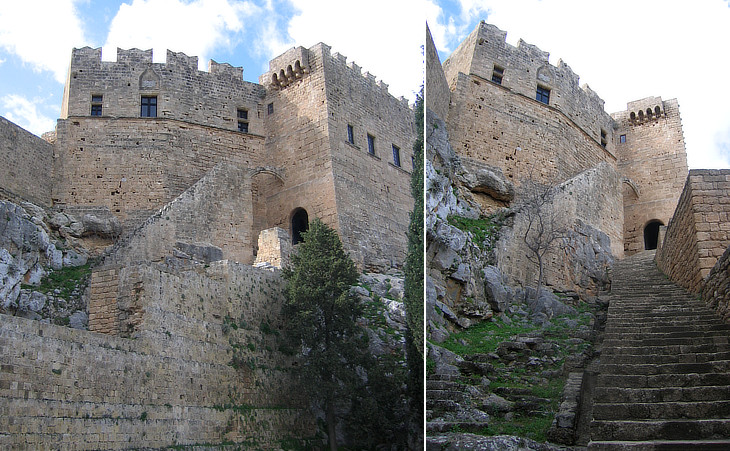 (left) The remaining part of the fortress; (right) medieval and modern steps leading to its entrance

The approach was on the northern side, where the fall is least abrupt; here there are three gateways, which lead successively through three lines of walls, and the third of these, by which the castle itself is entered, is very deep from back to front, and has pointed arches inside; within this, two drums of ancient columns are placed on either hand, and appear to have served for the stations of soldiers on guard. It is a curious feature that another entrance at this point led to the upper storey of the gateway, for a long flight of steps is attached to the outer wall, and from the top of this it would seem that a drawbridge or wooden ladder afforded an entrance. Tozer
The rock can only be accessed by a narrow path on its northern side and this explains why the Knights chose the site for one of their first fortresses on the island.

View of the interior of the fortress; to the left the apse of a church

Close to this gate stood the most important buildings - a church of St. John the Baptist, and the residence of the commander of the fortress, below which are extensive subterranean chambers. (..) At several points within the castle there are vast cisterns, and a passage for the defenders runs round inside the battlements. The rest of the area is a mass of ruins. Tozer 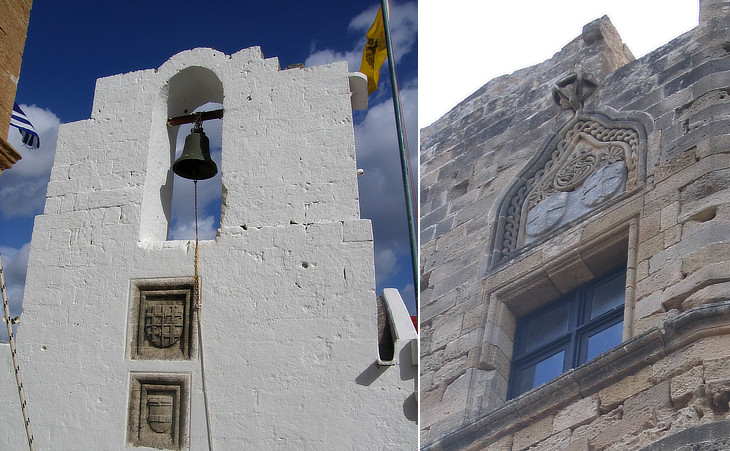 (left) Bell tower of Agia Panagia with the quartered coats of arms of Grand Master d'Aubusson and of the Order; (right) window of the fortress with the same coats of arms

Pierre d'Aubusson was Grand Master of the Order for 27 years (1476-1503) and he placed his coat of arms on both the fortress and the main church located in the town below. With the capitulation of Rhodes in 1522 the Knights left Lindos and the fortress was occupied by a small Ottoman garrison.

Lindos town: 1642 house of Fedra Moskoridis (left) and other views of the town

Many of the houses date from the time of the Knights, who are known in the island as Cavaliers, and occasionally as Crusaders. These mansions can be distinguished by their ornamental doorways and windows, with pointed arches and Gothic ornaments, but not a few are partially ruined, for Lindos has greatly shrunk in size, and now contains less than 800 inhabitants. As in the town of Rhodes, substantial flying buttresses are thrown across the streets as a defence against earthquakes. Tozer
The Knights decorated their portals, windows and the frames surrounding their coats of arms with a plait motif. In Lindos this tradition survived during the Ottoman rule and the Greek inhabitants of the town continued to decorate their houses with it. You can see it also in the image used as background for this page. 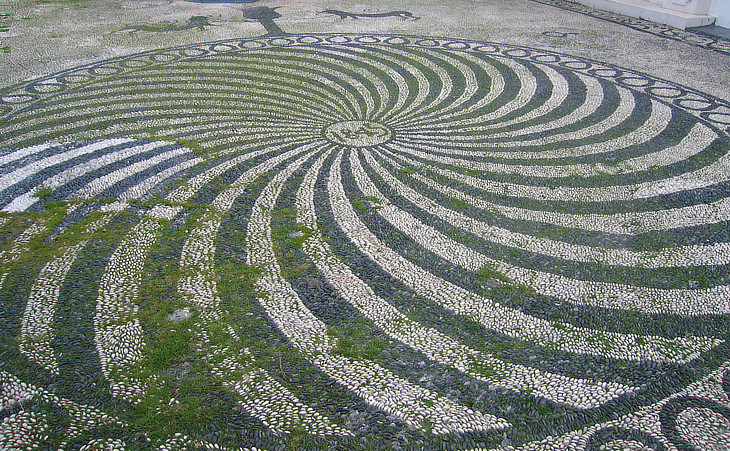 We were conducted to the house of a native gentleman, M. Vasiliades, to whom we had an introduction from Mr. Biliotti. The courtyard round which this was built was covered with a tessellated pavement of pebbles, a mode of ornamentation which is common in the island ; in some dwellings even the rooms are floored with them, and the patterns in which they are arranged are often elaborate. Tozer