- Manisa - page 3: Other Monuments
(bust of Ayse Hafsa Sultan and the mosque she built)

You may wish to read page one covering the ancient town and page two showing the main mosques first. 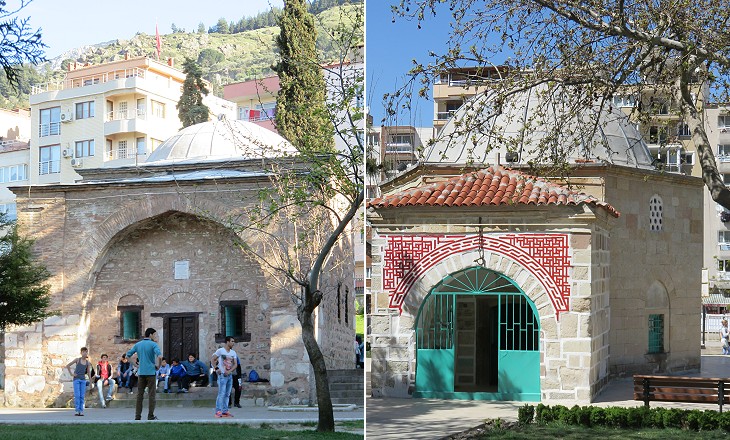 The town has a great number of minarets of mosques, and more and better public buildings than Smyrna. (..) As we approached Manser (Manisa) we met many trains of natives on asses, and strings of camels, and saw every indication of a large and busy town. (..) Manser is a very extensive place, but the houses are wholly built of mud, and the streets here, as in all the towns that I have yet seen, are covered over from house to house with canvas, mats, or vines on trellis, shading the street from the sun; and thus the shops only are visible to the traveller, who can gain but an imperfect view of the town.
Charles Fellows - Journal Written during an Excursion in Asia Minor in 1838
The 1922 fire destroyed most of Manisa, but a number of monuments located on high ground and separated by gardens from the city centre were spared, including the mausoleum of Sarukhan Beg who conquered Manisa in 1313. 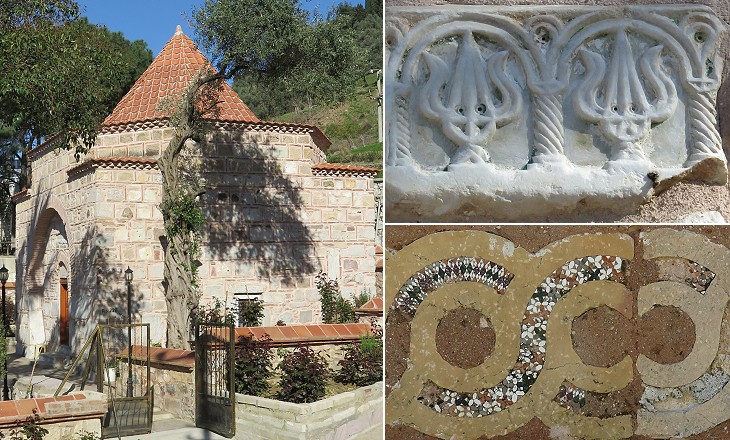 (left) Revak Sultan Turbesi (1371); (right) details of its decoration which most likely were taken from a church

Revak Sultan ruled over the principality established by Sarukhan Beg and his turbe (mausoleum) is situated on high ground near Niobe's Rock. It is a kumbet, the name given to Seljuk mausoleums which are characterized by a pyramidal dome (you may wish to see those at Kayseri). 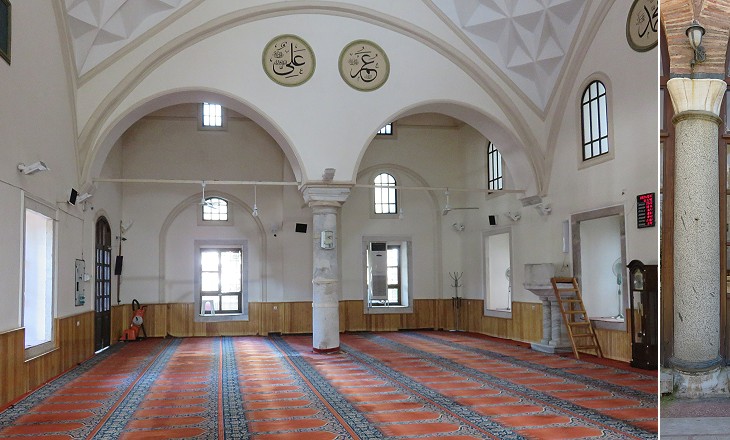 One of the oldest mosques of Manisa was built by Cesnigir Sinan Bey, a freed slave of Sultan Mehmet II, the conqueror of Constantinople. Slave soldiers could achieve high status in the Ottoman army for their bravery and loyalty to the Sultan.
Before dark, a large batch of lately-imported black slaves passed us near Manisa on their road to Constantinople. They were of both sexes, and of all ages. Their clothing was in a wretched plight, and some had scarcely rags to their backs. They were mounted on horses or mules; in some instances two, and in others three slaves being placed on one beast. On the following morning, these poor wretches were to proceed on their journey to Constantinople, where they were to be disposed of by public auction.
George Keppel - Narrative of a journey across the Balcan - 1831.
Pagan regions of Africa (e.g. the African Great Lakes) were a source of slaves for the Ottoman Empire. They were called Zanj (Blacks), hence Zanzibar (Coast of the Blacks), an island in the Indian Ocean which housed a famous slave market. 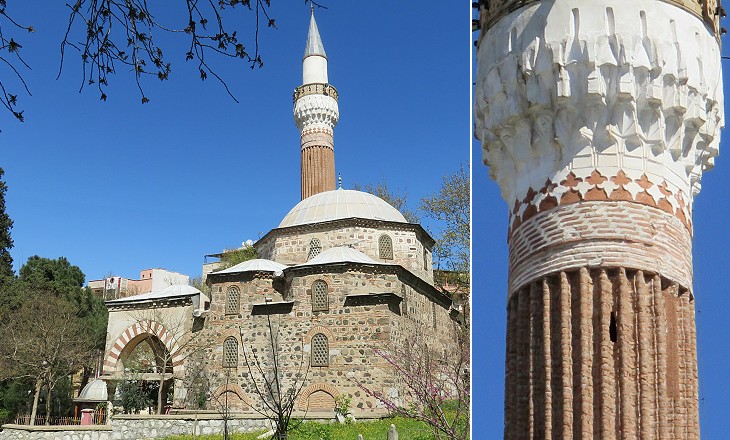 The decoration of the minaret recalls those of Uc Serefeli Camii, a large mosque built in 1447 at Edirne. At the peak of their power the Sultans (similar to the ancient Roman emperors) and the local governors they appointed were very keen on showing the strength of the Ottoman Empire by promoting extensive public works which were not limited to mosques, but included aqueducts, bridges, roads, etc. 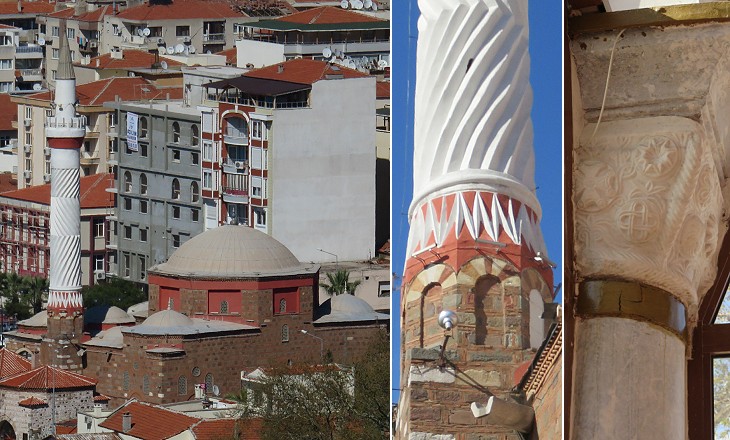 (left) Hatuniye Camii (1490, but much reconstructed after the 1922 fire); (centre) base of the minaret; (right) ancient capital in the porch with a cross as decorative motif; another detail is shown in the image used as background for this page

Hatun was an Ottoman honorific title for a high rank woman, especially for the chief consort of a Sultan. The construction of this mosque was promoted by Husnu Sah Sultan, wife of Sultan Beyazit II in 1490. She accompanied her son Sehzade (Prince) Sehinsah, who had been appointed governor of Manisa at the age of seven, to ensure the boy properly behaved. She is buried in a turbe at the Muradiye cemetery of Bursa. 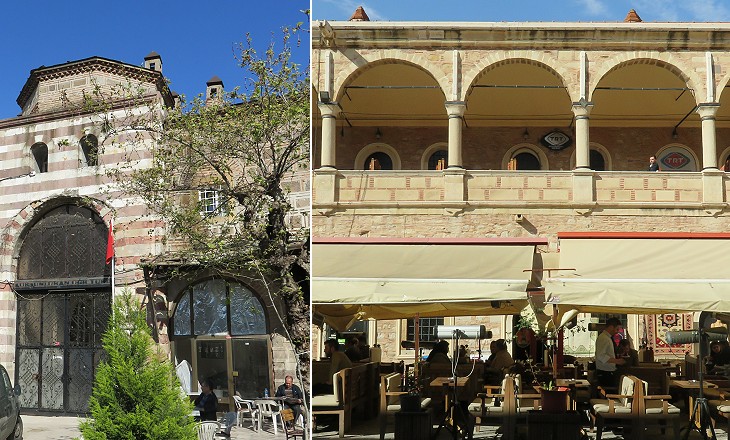 We came to Magnesia at 3 o clock in the afternoon and got lodgings in the first Khan or Caravanserai (Kursunlu Han). A place which for its use answers to an inn in Europe and where a traveller hath the same kind of accommodations according to the customs of the country. The house was well built, but kept in bad repair (..) I here first experienced how a traveller is lodged in Turkey. We were led to a chamber the passage to which was more difficult than the high hills I afterwards ascended as on the latter I had firm ground to stand on, but here loose stones only. The inward appearance was such as might be expected in a place which has not been cleaned for 1000 years viz from its beginning and perhaps some thousands of people have lodged in it. A rush matt was laid on the floor for each of us on which we put the bed clothes we had taken with us and this was all our furniture: table, chairs and bed.
Fredrik Hasselquist - Voyages and Travels in the Levant in the Years 1749, 50, 51, 52.
I am now in a very fine building (Yeni Han), the public khan. It is as extensive as any Italian palace, and built entirely of stone and iron; each room is dome-topped, with iron gratings and shutters to the windows, and an iron door, which was unlocked by a black slave with immense keys; the heavy door opened and I walked in, as if into a prison, but found it so clean, that although it offered little more than bare walls, I liked its appearance better than that of any house I had seen for months. Mats were spread on the floor, and unfolding my stores, all other comforts, together with an excellent dinner, were quickly supplied. Fellows The princes who held the position of Manisa governors had a small court in their palace. High rank officials were often given the honorific title of Aga meaning chief/master. Husrev Aga built a small kulliye (a complex including other buildings in addition to a mosque) when the future Sultan Selim II was governor of Manisa. 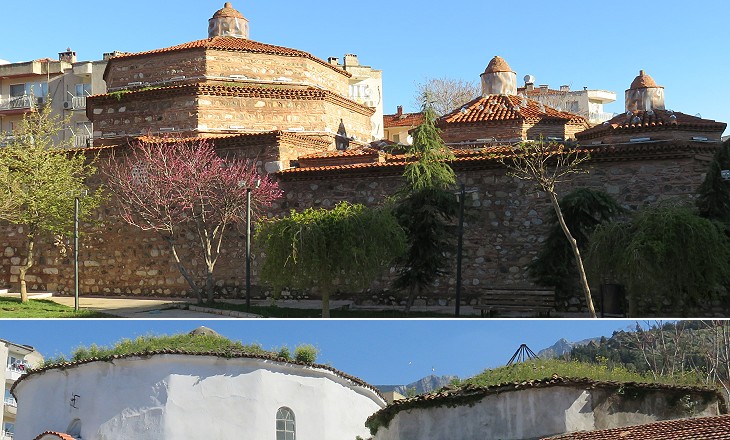 The modern town has been visited by many travellers. Its present impoverished and almost desolate condition forms a melancholy contrast with the thriving and populous state which it exhibited when it was the capital of the chieftain of the Cara Osman Oglou family. (..) It is now fifteen years since the family of the Cara Osman Oglou have ceased to rule, and that a pasha has supplied their place. In the interval, a complete ruin has been effected; the land lies fallow; commerce has declined; population has rapidly decreased. Keppel
During the XVIIth century Ottoman succession rules were changed and younger brothers became the first ones in the line of succession. Ruling sultans however feared their brothers could plot against them. Rather than assigning the crown princes to positions where they could acquire experience the ruling sultans often chose to confine them in the Harem of Topkapi Sarayi. Manisa was therefore ruled by governors having no ties with the Sultan's family. The Kara Osman were a family whose members managed to be appointed governors of Manisa from 1691 until the early XIXth century, one of many local dynasties which contributed to the decline of the Ottoman Empire. 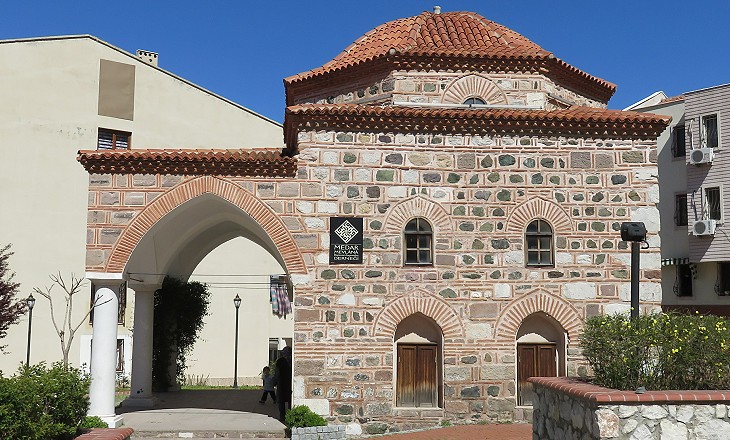 This small building is associated with the followers of Mevlana Jalal-ad-Din who are best known as the Whirling Dervishes. They enjoyed the protection of the Sultans, but eventually their order was banned in 1925. Today they have become a popular symbol of Turkey and Whirling Dervishes shows are included in most package tours of the country.

Return to page one or page two.