in Central Asia - Samarkand - p. 3
(detail of a decoration at Abdoul Aziz Khan Medrese in Bukhara)

You may wish to see an introductory page or page one or page two first.

At a distance from Righistan are the extensive ruins of the once really magnificent Medresse Hanym, which a Chinese princess, wife of Timour, erected out of her private purse. It is said at one time to have accommodated a thousand students.
Arminius Vambery - Travels in Central Asia in 1863

Portal of Bibi Khanoum in the 1920s and today

An evidence of by-gone splendor appears in its ruins, of which three walls and the forefront or frontispiece still exist; the latter, with its towers and portal, that might serve for a model, has its pavement completely covered with mosaic made of earth, the composition and coloring of which are of incomparable beauty, and so firmly cemented that it occasioned me indescribable trouble to cut away the calyx of a flower; and even of this I could only remove in a perfect state the innermost part, with three leaves folded together. Vambery
In the 1920s only massive fragments survived of this enormous complex commissioned by Timur after his victorious campaign in India and dedicated to his wife Saray Mulk (Bibi Khanoum = Old Queen). The mosque stood at the end of a large courtyard where two smaller mosques were located. A gigantic portal was placed at the entrance of the courtyard. Its size was unprecedented: a courtesan of Timur wrote that it was larger than the Milky Way.

Ensembles in Samarkand such as the Bibi Khanum Mosque and Registan Square played a seminal role in the development of Islamic architecture over the entire region, from the Mediterranean to the Indian subcontinent. (..) The main listed monuments are well maintained. Some of the medieval features have been lost, such as the city walls and the citadel. (..) Nevertheless, it still contains a substantial urban fabric of traditional Islamic quarters.
From the UNESCO synthesis of the universal value of Samarkand which in 2001 was added to the World Heritage List.
It is said that Timur brought 95 elephants from India to employ them in the construction of a gigantic mosque in Samarkand. He personally supervised its construction: he threw pieces of meat to the workers as a reward and occasionally even gold coins. Yet perhaps because it was built in a rush the complex of Bibi Khanoum soon showed construction defects. The whole complex has been almost entirely rebuilt; its decoration is based on that of the palace Timur built at Chakhrisabz, his hometown. A covered bazaar linked this complex to Registan. Today's Samarkand does not retain its old network of streets. During the Soviet period large alleys and modern buildings replaced them, so the city's imposing monuments lack a proper context.

The complex of Bibi Khanoum included a medrese and a mausoleum which were located opposite the portal of the mosque. The medrese was the first building to show construction defects and to be severely damaged. The mausoleum (Saray Mulk Khanoum) in the 1920s was in a ruinous state. Very few domes of Samarkand are original: their design shows that the architects were not able to cover with a dome a wide space and that they did not dare to open windows in the drum or the dome itself, unlike what Ottoman architects did at Constantinople in the XVIth century, e.g. at Mihrimah Camii. A feature of many Samarkand domes is their "ribbed" aspect and the fact that they consist of two domes; the interior ones have a traditional sphericonical shape while the exterior ones are larger than the drums which support them; this gives them a bulbous shape.

Although the work of destruction is eagerly proceeded with, we can still perceive in the interior, where at present the hired carriages that ply to Khokand and Karshi take up their quarters, the mosque; and many a century must the people of Samarcand continue to tear away and cut down before this work of annihilation is complete. Vambery
The side view shows a section of the original walls and an opening which gives access to the interior.

While the exterior of the mosque has been decorated with new tiles, its interior retains traces of painted plaster and gilded papier mache. 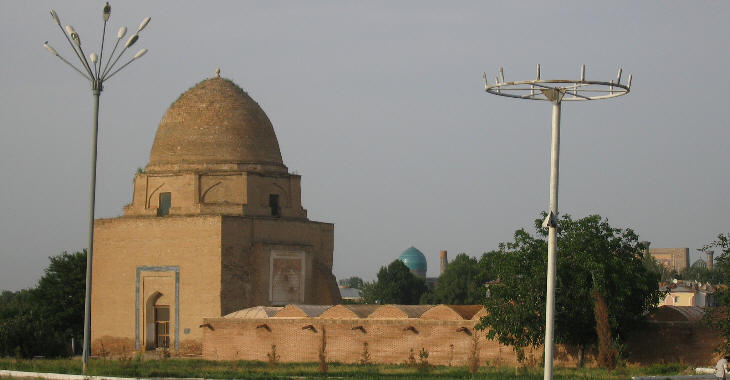 The mausoleum dedicated by Timur to Sheikh Burhan alDin Sagarji has a rather ancient appearance. He was a holy man highly revered at the time of Timur. It is said that he was buried with a box containing some hair of Prophet Muhammad. The mausoleum is known as Roukhabad which means (the building which) houses the soul. It is now surrounded by very busy roads. In the past a paved street linked it with the mausoleum of Emir Gour (which can be seen in the distance).

The sepulchre of Timour, to which all the other edifices in Samarcand have more or less resemblance in point of style and decoration, shows clearly enough that the artists were Persians, and one needs only to compare the monuments of this city with those of Herat, Meshed, and Ispahan, to be convinced that the architecture is Persian. (..) Besides these edifices, there are some other towers and dome-shaped buildings, the work of by-gone days. Vambery
Gour Emir means the tomb of the sovereign. Timur built it as the resting place of his grandson Muhammad Sultan, who died in battle in 1403 at the age of 29. Muhammad Sultan built a medrese and a khanagha, a monastery for the dervishes and Timur decided to add a mausoleum for his grandson. He eventually wanted to be buried there as did his sons and grandsons, so that Gour Emir can be regarded as the Timurid dynastic tomb. The mausoleum was built on the southern side of a walled square courtyard already defined on two sides by the medrese and the khanagha (which no longer exist).

Minarets marked each corner of the courtyard, two of which remained in part and have been reconstructed. A ribbed dome on a tight high drum is visible from a great distance. The dome is tiled in two tones of blue. The minarets were decorated with bands of tiles forming a monumental Kufic inscription which repeats God is eternal.

Ouloug Beg, Timur's grandson, built one of the earliest Islamic astronomical observatories on the ruins of the ancient city of Afrasiab, in the outskirts of Samarkand. The underground sections of its gigantic marble sextant were unearthed in 1908. After its founder's assassination in 1449 the site was abandoned. The observatory consisted of three astronomical instruments, the main one being a sextant running through the centre of the building; it was placed along the north-south axis. This quadrant, with incised Arabic symbols and numerals on marble slabs was partly hewn into rock. Based on contemporary descriptions, the observatory had a circular shape and it was decorated with glazed brick mosaics on the exterior, while the interior had paintings depicting heavenly bodies.

Afrasiab (beyond the river) is the name which was eventually given to the ruins of ancient Samarkand. In 1965 archaeologists identified a building which was most likely the residence of the city's rulers. A large room was decorated with three frescoes depicting scenes related to a royal wedding. Notwithstanding the effects of time and the Muslims scraping out the eyes of many personages they retain much of their original elegance.

The bride was a Chinese princess and the painter too was most likely a Chinese. The scene above portrays the bride while she is being carried to the royal palace on a boat.

The building shown above is both one of the oldest and one of the newest mosques of Samarkand. It was built by the Arabs when they conquered Samarkand in the VIIth century on the site of a temple. However it was rebuilt several times, the last one in the XIXth century.