in London
(a barge at Little Venice) 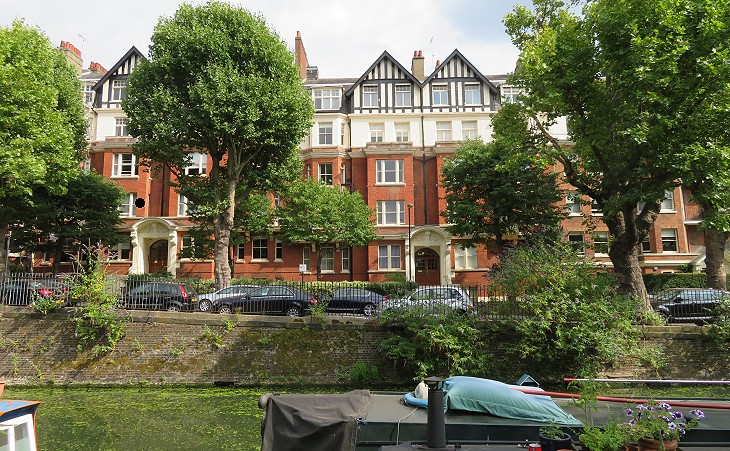 In 1981 I was transferred to London and I was granted a house hunting trip for relocating there. The lady who was assisting me had arranged a series of visits to flats for sale and had sent me a list: when I read "one bedroom spacious flat in Little Venice" I was puzzled and very curious to see the flat and discover why the location was called Little Venice: when I saw it, it was love at first sight and I bought the flat. 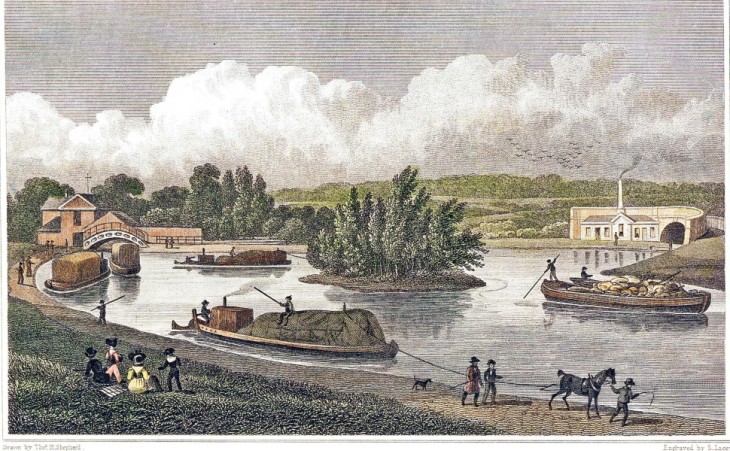 Little Venice is the name given to the junction between a canal leading to the Paddington basin, next to the London railway station by the same name, and the Regent's Canal. The canal was opened in 1801. It forms a triangular basin with a little islet, hence the reference to Venice. It is part of the formidable network of waterways which supported the industrial revolution in Great Britain prior to the development of railways. The XIXth century view shows a barge towed by a horse and at the same time making use of a small steam engine: it is a metaphoric representation of the transition between the two power sources. 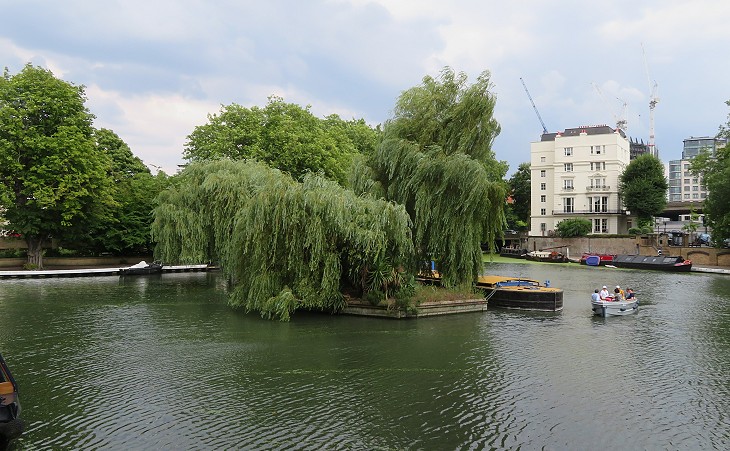 Little Venice can be easily reached by Warwick Avenue Underground Station or by car from Marble Arch going northwards through Edgware Road and turning left after a mile in Maida Avenue.
The Regent's Canal is also known as the Grand Union Canal, the latter being formed in 1929 by the union of several canals. 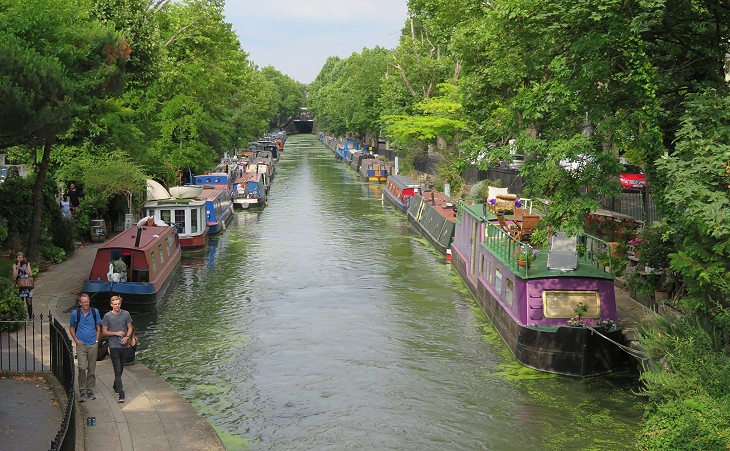 Barges in the Maida Avenue section of the Grand Union Canal

Today it is no longer economical to use the canal to transport commodities: the long and narrow barges have been converted into holiday floating houses. Along the canal there is a tow path which allows those who do not possess a narrow boat to use the canal for a pleasant walk without the noise of cars and the smell of their emissions. On most Sundays I used to take a walk from my place to Camden Town, where the area around the canal locks houses a very busy street market.

On the coldest days of London's winter a layer of ice is thick enough to support the canal ducks. 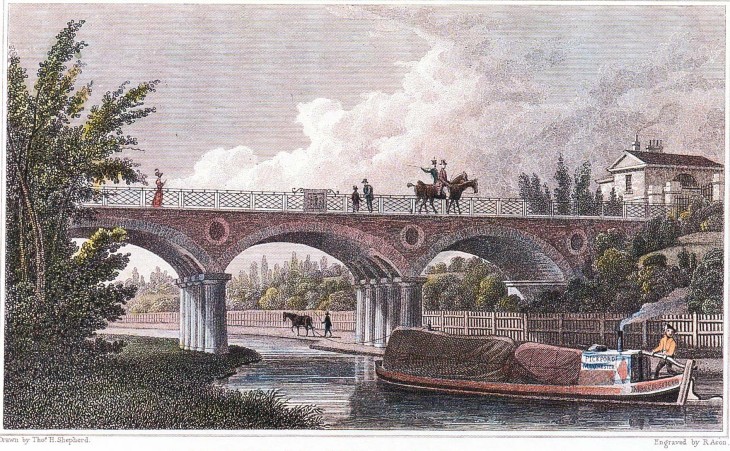 From London Gardens Trust: The bridge over the Regent's Canal to the north west of the Park was originally called North Gate Bridge but was renamed in honour of Lord Macclesfield, the Chairman of the Regent's Canal Company, who steered it through a financial crisis during its construction. In the early hours of October 10, 1874 the barge Tilbury was third in a train of vessels being towed by a steam tug westwards along the Canal. It was laden with sugar, nuts, two or three barrels of petroleum and five tons of gunpowder. The gunpowder caught fire, causing a huge explosion, as the barge went under the Macclesfield bridge. The crew were killed, the bridge destroyed and windows were blown out a mile away. It also destroyed the nearby house of the painter Alma-Tadema, who was fortunately away at the time. The explosion caused such havoc that a detachment of Horse Guards were brought in to help keep order and to ensure safety from wild animals at the Zoo. The bridge was rebuilt in 1876, using the original iron columns. 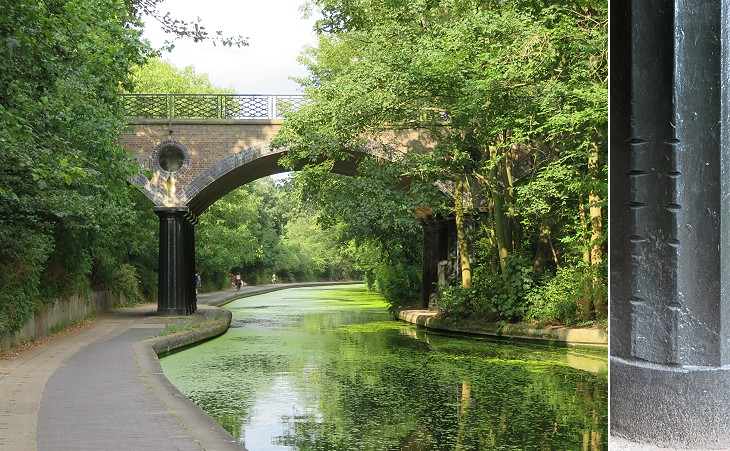 The columns show the marks caused by the attrition with the ropes linking the barges to the towing horses. 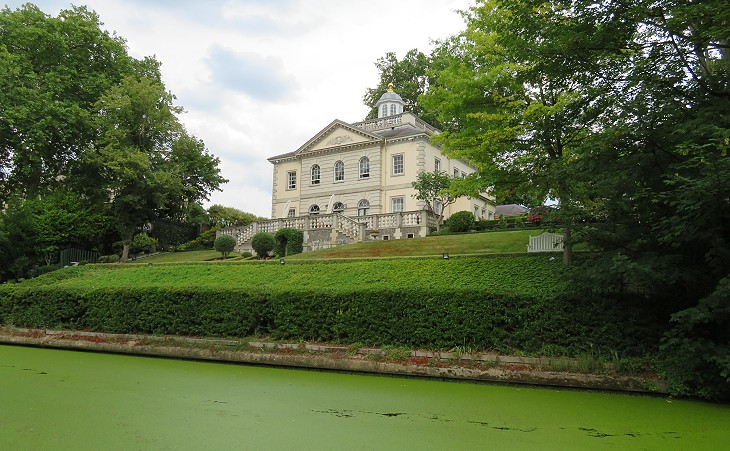 In late 1983 I returned to Rome and settled in San Saba. The sight of this and other luxury mansions came as a surprise to me when after many years I walked again along the canal towpath. They are a very new addition to the local landscape; today the view over the canal is a sought after amenity, but in the early XIXth century it is unlikely that a rich landlord would have been proud of it, because of the noise of the steam engines, the smell of the animals and the sight of the labourers who worked on the barges. 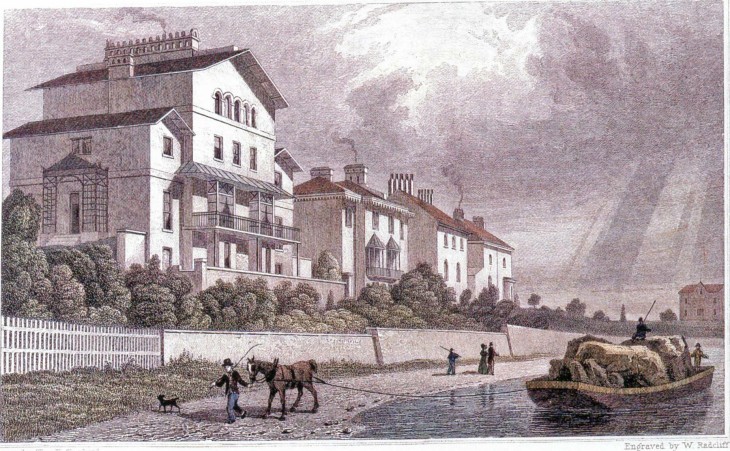 Park Village was created in the 1820s by John Nash as part of his master plan for Regent's Park. Nash combined stuccoed villas and terraces of sharply differing proportions and styles, on either side of an arm of the Regent's Canal that was later filled in. 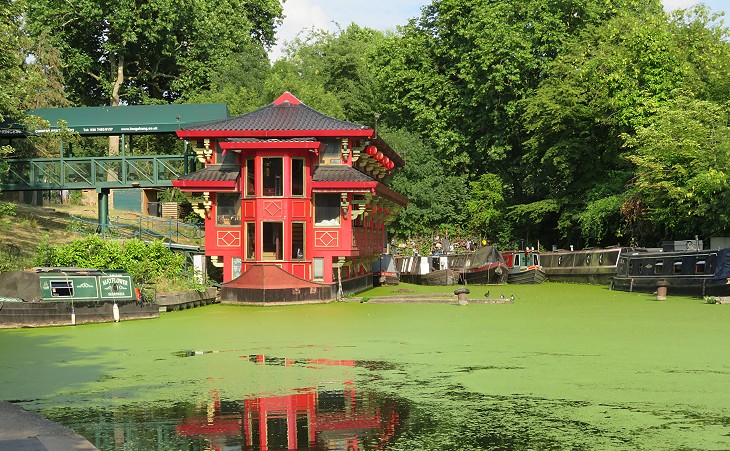 The dead end arm of the canal of Park Village; the canal turns left towards Camden Town

The arm was filled in to make room for the London and Birmingham Railway ending at Euston Station which was inaugurated in 1837. 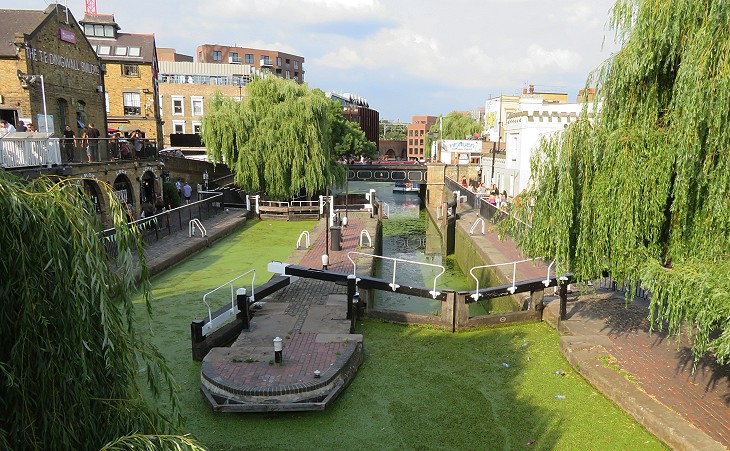 Islington Lock and Tunnel in 1828 and today

At Islington a long and narrow tunnel (960 yards - 878 m) cuts through the hill and from this point the canal goes down towards the River Thames. As there is no towpath a steam tug attached to a continuous chain on the canal bed hove barges through until the 1930s.

The Regent's Canal meets the Thames at Limehouse Basin. The old print shows the full vigour of the British Empire, built more on the strength of its manufacturing and trading skills than on the power of its armies. It is a pity that such an interesting area has been turned into a second rate Marbella-like marina. 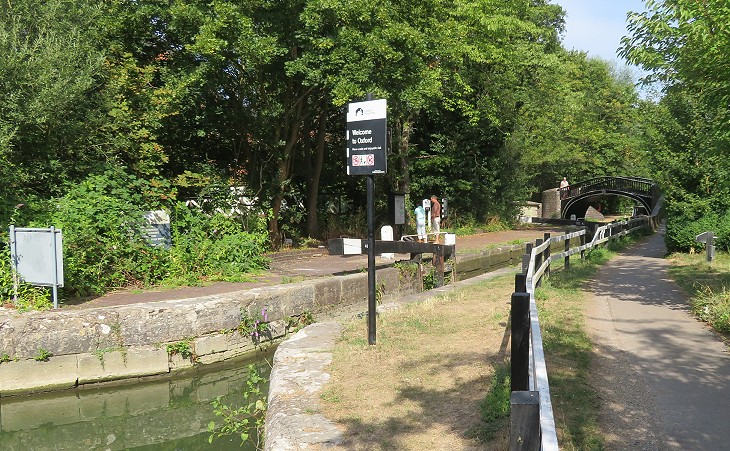 There are about 2,200 miles (3,500 km) of navigable canals and rivers throughout the United Kingdom.