Thuburbo Majus - page two
(detail of the theatre at Thugga)

This page describes the development of the town after Emperor Hadrian granted it the status of municipium. 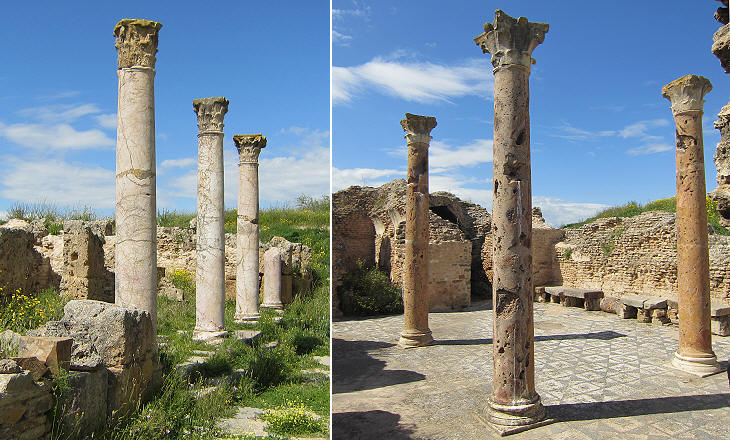 Winter Baths: two halls, that on the right with columns from Simitthus

Probably at the same time as they were rebuilding their Forum, the citizens of Thuburbo felt that the town needed public baths in line with its new status. They did not hesitate to decorate them with mosaics and with very expensive reddish columns from Simitthus, a location in the interior of the country near today's border with Algeria (see some samples of this marble - it opens in a separate page). 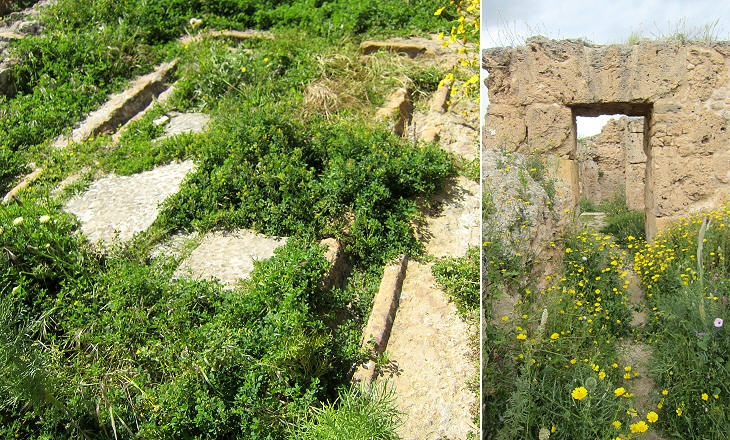 There is evidence that the baths were functioning in the early Vth century because inscriptions found on the site mention a restoration carried out between 395 and 408. When the town returned to being a village of peasants olive presses were installed in the baths. At the time of my visit in April 2012, Tunisian spring was in the process of covering the ruins with its yellow wild flowers. 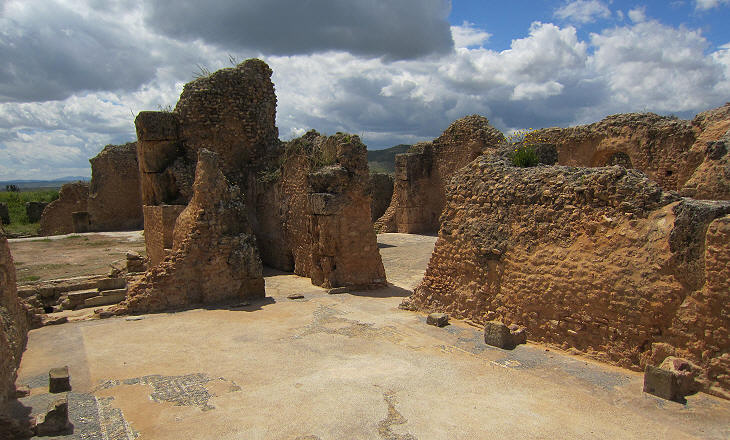 Main halls of the Summer Baths

Shortly after having completed the Winter Baths, the municipal authorities of Thuburbo built other baths at a very short distance from the first ones. Archaeologists think that during the hot season the springs which supplied the Winter Baths dried out, whereas the new baths, which were built at a slightly lower level, were supplied with water from a great cistern which can be seen in the introductory page of this section. This explains the names given by archaeologists to the baths. 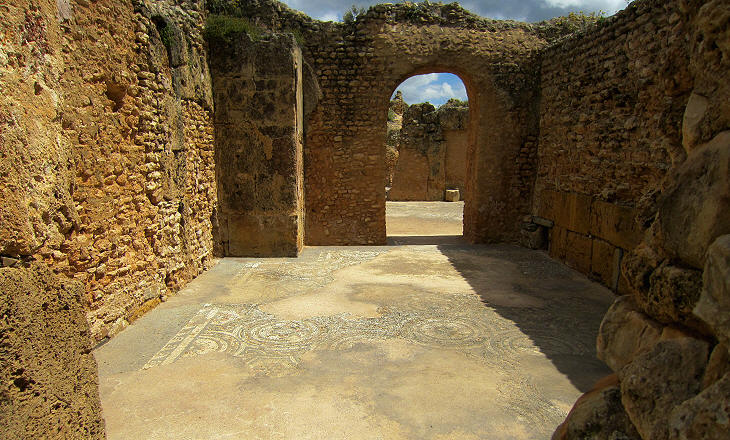 The Summer Baths were much larger than the Winter Baths and they were restored in 361 at the time of Emperor Constantius II who tried to revive the town.
During the excavations carried out in the early XIXth century some statues were found and they were moved to the Museum of Bardo at Tunis. A couple of altars were left in situ and a relief on one of them can be seen in the image used as background for this page. 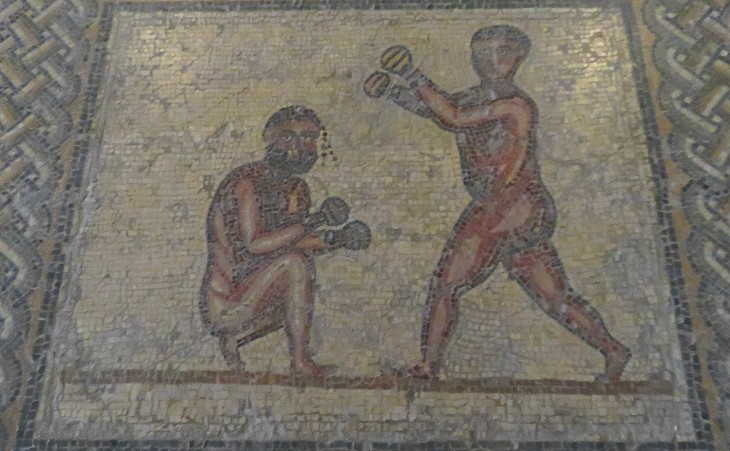 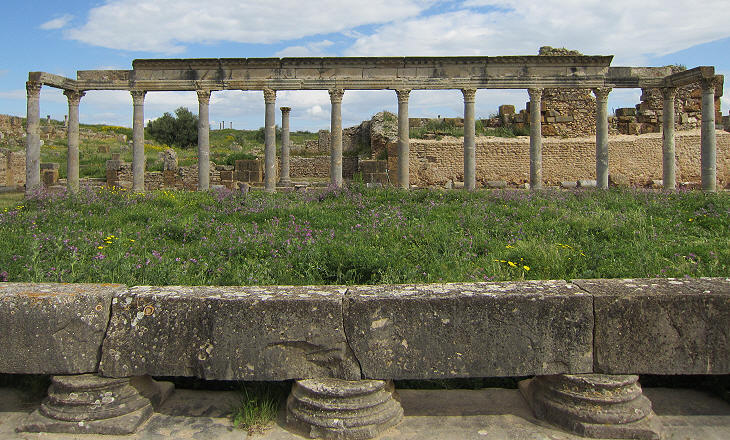 In 225 Petronius Felix and his sons built a palaestra, a large rectangular space where the inhabitants of Thuburbo could exercise or just walk in the shade of its porticoes. The palaestra is located between the two baths and with them it constituted the leisure area of Thuburbo. Archaeologists have reconstructed the southern colonnade with materials found on the site. 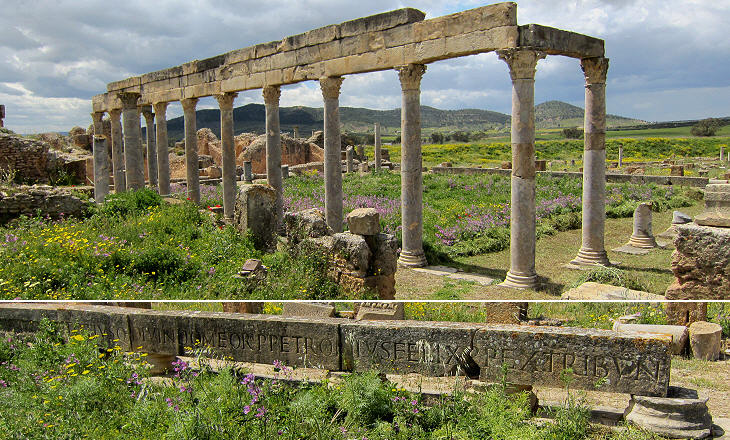 (above) Palaestra of Petronii and Summer Baths; (below) part of the inscription Wandering in the palaestra: (left-above) decoration of a lintel; (left-below) board for the "game of the 12 letters; (centre/right) reliefs portraying maenads, female followers of Dionysus/Bacchus

The portico was built with a particular type of marble which had yellow veins beneath a blackish surface; these were used to achieve a contrast effect.
In a corner of the portico a stone was incised with six words of six letters each; they were aligned on three rows with a symbol between the letters. The stone was the tabula lusoria (board) of duodecim scripta (twelve markings), a dice game similar to backgammon. 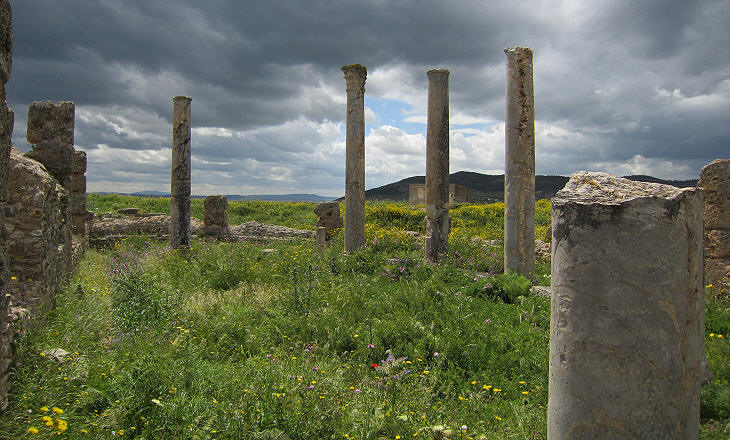 Byzantine church on the site of the Temple to Caelestis

The area of the baths/palaestra where the citizens of Thuburbo spent their leisure time was located near that where they celebrated their religious ceremonies. The temples in the Forum were meant to show the town belonged to the Roman Empire, but the deities to which they were dedicated were not those rooted in the local tradition.
Thuburbo was not a Phoenician colony, but its inhabitants were influenced by the deities which were worshipped at Carthage and in particular by Baal (male) and Tanit (female). The cult of the latter was Romanized as that of Juno Caelestis (Heavenly Juno), or more briefly of Caelestis because in some dedicatory inscriptions Juno was omitted. 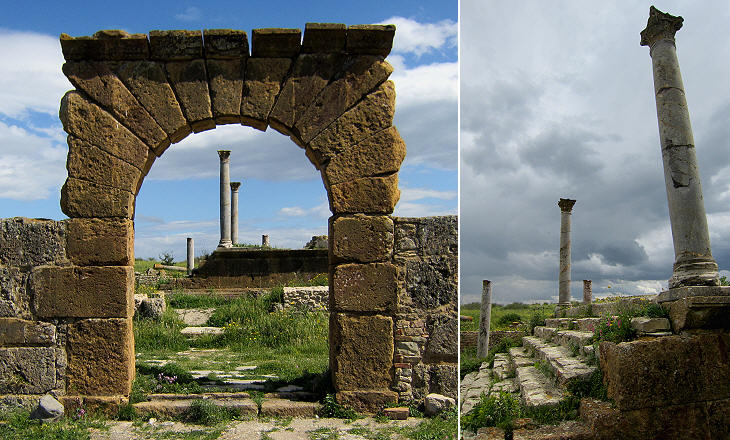 The Temple to Caelestis was turned into a church and its ruins do not say much about its appearance. Archaeologists however were able to identify the enclosure which surrounded the building and to reconstruct its portal. The presence of a large enclosure appears to be a feature of the cult of Caelestis as it can be observed at Thugga too.
According to some sources Baalat was the female side of Baal who instead was Romanized as Saturn. The design of the temple, because of its very high podium resembles that of the Capitolium and it was most likely built at the same time. 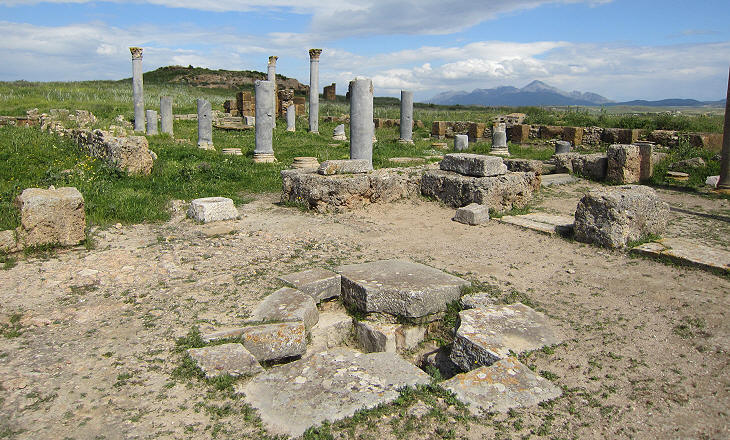 The deity to which was dedicated a third large temple near the previous ones has not been identified yet. The temple was surrounded by an enclosure and it was turned into a Christian basilica having a separate baptistery.
The temple is located at the edge of the part of the archaeological area which is subject to regular maintenance. 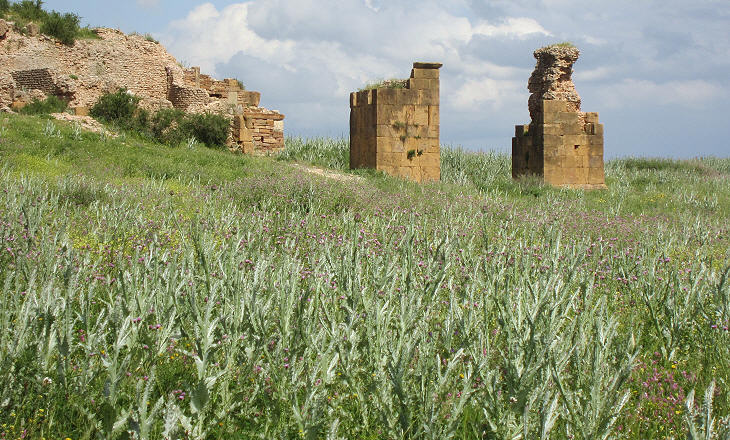 Visitors wishing to visit the Eastern Gate and the nearby Temple to Saturn need to carefully navigate their way through thorny weeds. There is no evidence of walls surrounding Thuburbo, which unlike other locations was not fortified on the eve of the Arab invasion; the entrance to the town was marked by celebratory arches, one of which still stands on a hill to the east of Thuburbo. 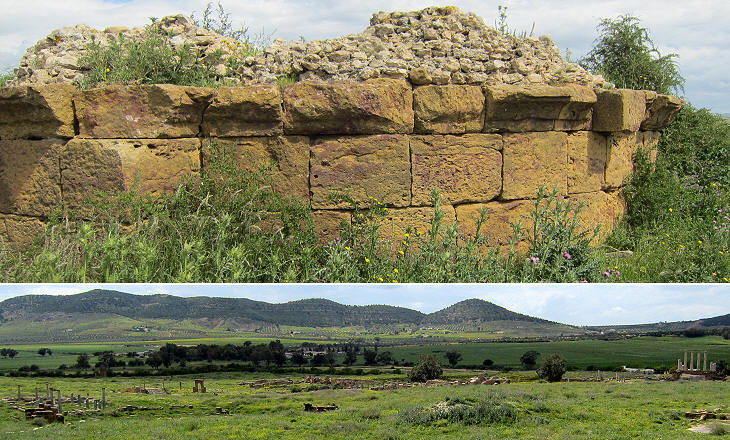 (above) Apse of the church built on the site of a Temple to Saturn; (below) view of the archaeological area from the Temple to Saturn: (left to right) Temple turned into a church, Temple to Balaat, Enclosure of the Temple to Caelestis, Baths and Palaestra of Petronii, Forum and Capitolium