Germany is a large country of Europe divided into several states and principalities which are united under one head distinguished by the title of Emperor. (..) The most received division of Germany is that which was made by the Emperor Maximilian I in 1512 into ten circles. (..) The circle of the Lower Rhine contains: 1) the palatinate of the Rhine (..) subject to the elector Palatine (..) 2) The archbishopric and electorate of Cologne (..) 3) The archbishopric and electorate of Mainz (..) 4) The archbishopric and electorate of Triers (..) 5) The bishopric of Worms (..) 6) The duchy of Simmeren subject to its own duke (..) 7) The counties of Falckenstein, Leiningen, Oberstein, Spanheim, Reiffenscheid, and Rovenau subject to their own counts and the county of Meurs subject to Prussia.
Thomas Nugent - The Grand Tour: A Journey Through the Netherlands, Germany, Italy and France 1756.
This excerpt shows what a mosaic of states made up Germany in the XVIIIth century. In total there were some 300 states in the ten circles.

Koblenz: coat of arms of Johann von Schönenberg, Archbishop-Elector of Trier in 1581-1599, in a Jesuit college, now the Town Hall; the helmet signifying nobility has on top a mitre indicating the ecclesiastical rank

The nine electors are three ecclesiastical, viz the archbishops of Mainz, Triers and Cologne and six secular. (..) Every elector is sovereign in his own dominions. They make laws, establish courts of justice, coin money, levy taxes, conclude alliances with other princes of the empire or foreigners, raise fortifications and make war or peace under some restrictions. But they cannot (..) enter into such confederacies as tend to the prejudice of the empire or are contrary to the allegiance they have sworn to the emperor. When the empire becomes vacant (..) the elector of Mainz as high chancellor of the empire and dean of the electoral college gives notice to the other electors that they appear at Frankfurt within the space of a month to elect a new Emperor who is generally agreed on before they come to the place of election. (..) Though the imperial dignity was rendered elective, yet the house of Austria found means to continue it in their family near three hundred years. Nugent
Since 1440 the Electors always chose the Habsburg Archduke of Austria as the new Holy Roman Emperor, with just one exception in 1742, during the Austrian Succession War, when the Prince-Elector of Bavaria managed to be elected Emperor Charles VII. 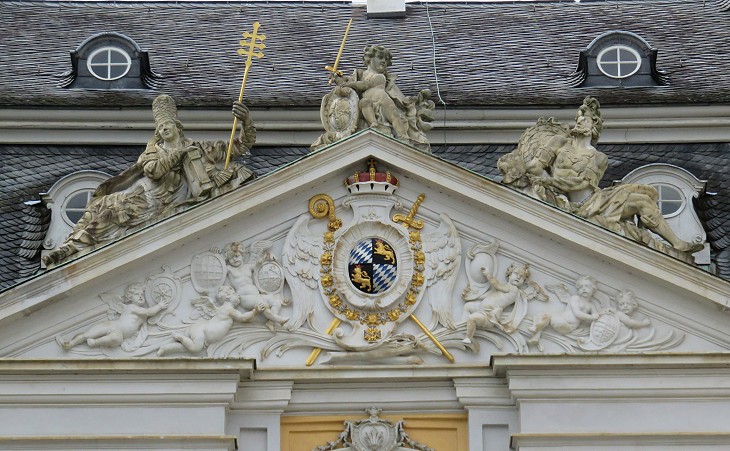 Schloss Augustusburg: eastern façade with the coat of arms of Clement Augustus, Archbishop-Elector of Cologne and statues which are allegories of the Church and of the Empire

The present elector of Cologne is prince Clement Augustus of Bavaria, brother to the late emperor Charles VII. He was born 16 August 1700, chosen archbishop and elector of Cologne 12 Nov 1723, bishop of Hildesheim 1724, bishop of Osnabruck 1728, bishop of Munster and Paderborn 1729 and grand master of the Teutonic order 1732. In most of these bishoprics he is absolute and is by far the most powerful of all the spiritual electors. The electorate of Cologne extends upwards of 70 miles along the western bank of the lower Rhine, but is not above seven or eight broad. Nugent
Cologne itself was a Free Imperial City and the archbishops were usually not allowed to enter it.

The elector of Cologn has a palace at Bonne the antient Bonna, in which he usually resides, and an unfinished palace near the town.
Richard Pococke - A Description of the East and Some Other Countries - 1745 (travels in 1737-1741)
Bonn is a small town of the electorate of Cologne situated on the west side of the Rhine and the ordinary residence of the elector of Cologne. It suffered much in the beginning of the present century but (..) it improves every day while Cologne is decaying. It is now a well built town pretty populous and strongly fortified. (..) The palace begun by the late elector makes a very grand appearance and would have been one of the most considerable structures in Germany if it had been brought to perfection. Notwithstanding all this magnificence at Bonn the elector spends most of his time at Bruhl, a house (i.e. Schloss Augustusburg) he built about nine miles out of town which though not very large has very fine apartments completely furnished. The gardens are exceeding pleasant and laid out in taste. Nugent 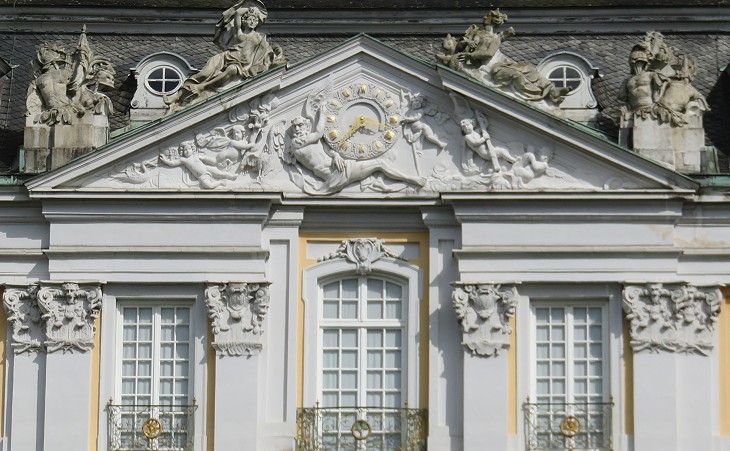 Schloss Augustusburg: western façade with an allegory of Time

The construction of Clement Augustus' countryside palace near Bruhl began in 1725, based on plans by Johann Conrad Schlaun who was soon replaced by François de Cuvilliés, court architect of the Prince-Elector of Bavaria at Munich. 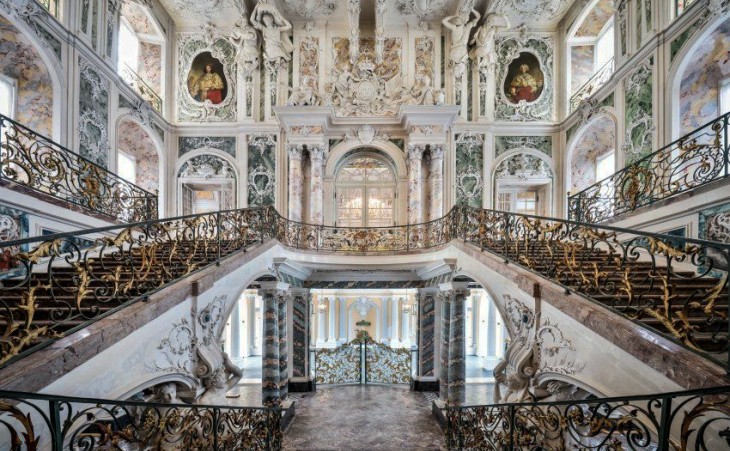 Grand staircase at Schloss Augustusburg (image based on a photograph found in the web; the interior can be visited, but they do not allow to take photographs)

At Augustusburg, the staircase of Balthasar Neumann - considered a work of creative genius - is a rapturous structure which unites a lively movement of marble and stucco, jasper columns and caryatids, and culminates in the astonishing frescoed ceiling of Carlo Carlone.
From the 1984 UNESCO Brief Synthesis of the Universal Value of the palace.
The staircase is a 1743 addition by Balthasar Neumann, an architect best known for having designed the palace of the Prince-Bishops of Würzburg. You may wish to see the grand staircase designed by Luigi Vanvitelli at Caserta a few years later. 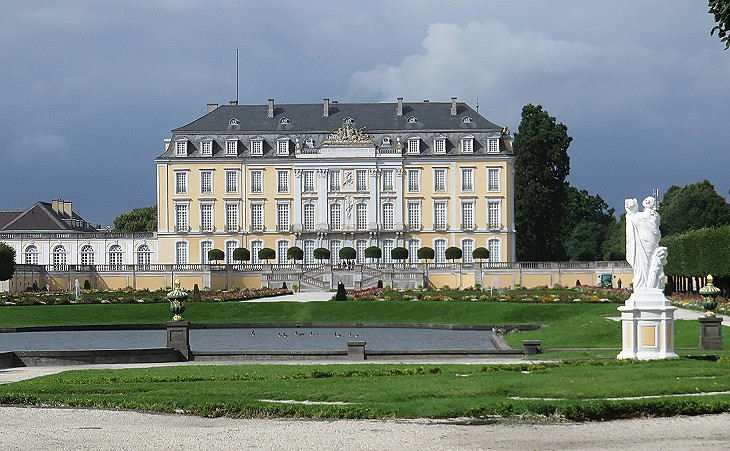 Schloss Augustusburg: view of the southern façade from the pond

The formal gardens were designed by Dominique Girard, a pupil of André Le Nôtre, who created those at Versailles. Because the ground surrounding the palace is flat Girard could not add the waterfalls which he designed at Nymphenburg and at Belvedere Palace in Vienna and which characterize other similar mansions (see those at Caserta and La Granja di San Ildefonso near Segovia). 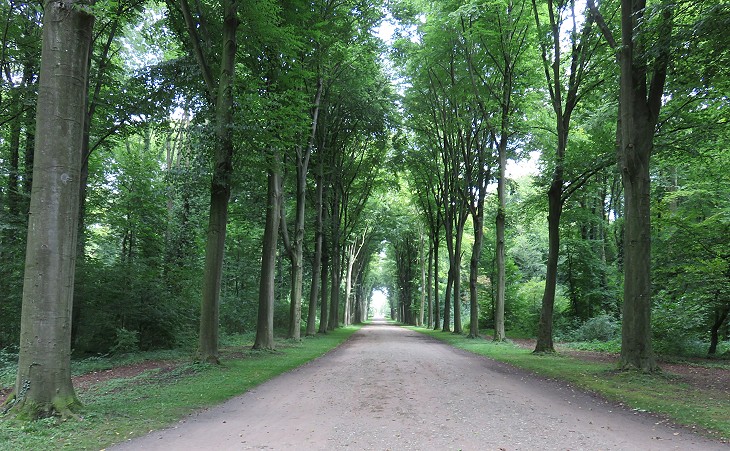 William V, Duke of Bavaria fought on the Catholic side during the religious wars which tore apart Germany in the XVIth century. By doing this in 1583 he secured the Archbishopric of Cologne for his brother Ernest and more in general for a member of his family (Wittelsbach). For this reason Clement Augustus did not need to become highly proficient in theology or to conduct a particularly pious lifestyle. He belonged to one of the noblest family of Germany and he enjoyed hunting, the preferred pastime of his class. He could not marry, but he did not need to hide having a mistress and his daughter married Franz Ludwig von Holnstein, the illegitimate son of Charles VII, his brother. Access to Schloss Falkenlust; the image used as background for this page shows one of the lions

The Bruhl estate included a woodland which was within easy reach from the palace, but Clement Augustus chose to entrust François de Cuvilliés with the construction of a hunting lodge, where he and his fellow hunters could rest. The site was selected taking into account the flight path of the herons, the favourite prey in falconry. 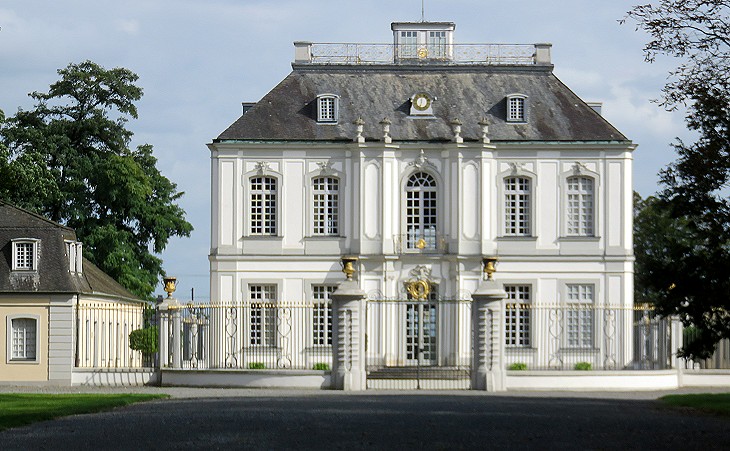 Caserta, Wednesday, March 14, 1787. The new palace appears to me, however, particularly gloomy; and no one of us could bring himself to think the vast and empty rooms comfortable. The King probably is of the same opinion, for he has caused a house to be built on the mountains, which, smaller and more proportioned to man's littleness, is intended for a hunting-box and country-seat.
Johann Wolfgang von Goethe - Italian Journey - translation by Charles Nisbet
The comment made by Goethe could apply to Clement Augustus too.

There is a fine piece of shell work, in which birds and other animals are represented in a curious manner; it is the work of Mons. Poitrieh (..) at Falcouse two leagues from Bonne, which is said to be a most beautiful performance. Pococke
In 1794 French troops occupied Bonn and Cologne which were formally annexed to France in 1801. In 1815 at the Congress of Vienna, the states of the Archbishop-Electors of Cologne, Trier and Mainz were assigned to the Kingdom of Prussia.
Schloss Augustusburg was badly damaged during the final phase of WWII. Efforts to restore it to its previous splendour had already begun by 1946. From 1949 to 1996 it was used as an official representative palace. Ceremonies and banquets were held by the President of West Germany to greet foreign dignitaries. 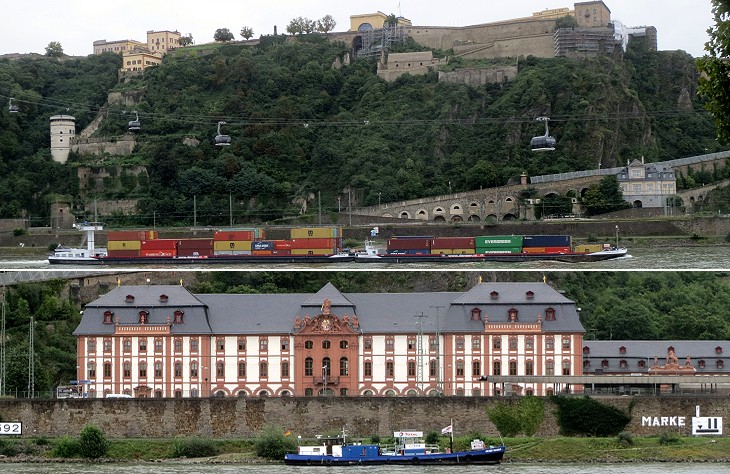 On the other side of the Rhine just over against this city stands the castle of Ehrenbreitstein which they reckon impregnable. It is situated on a steep rock twice as high as Windsor castle which commands the city and the two rivers. The ascent to it is a winding road cut out of the rock through no less than four gates. In the middle of it there is a square on one side of which is the governor's house and the other three are occupied by magazines and barracks. (..) The present elector of Triers is Francis George de Schoenborn. (..) He is the second elector of the empire and sovereign of a country extending 80 miles in length and from 20 to 50 in breadth. (..) His ordinary residence is at Ehrenbreitstein. Nugent
The lofty mountain opposite the town is covered with the ruins of Ehrenbreitstein, which was at one time considered as the strongest fortress on the Rhine.
Richard Boyle Bernard - A tour through some parts of France, Switzerland, Germany, etc. - 1814
In the XVIIth century Archbishop-Elector Philip von Soetern built a series of palaces at the foot of the castle. They were improved and redesigned by Balthasar Neumann in 1739-1749, but in 1801 the French blew up the castle and most of the palaces.

Trier, the ancient Augusta Treverorum was the capital of Gallia Belgica, a Roman province along the left bank of the Rhine. In the early IVth century and before becoming the sole ruler of the Empire, Constantine set his residence at Trier and built a palace which included a large basilica which was used as an audience hall. In the following centuries the palace was abandoned and eventually parts of it were turned into the residence of the Archbishop-Elector. In 1756 Archbishop-Elector Johann Philipp von Walderdorff decided to improve his residence at Trier. He assigned the task to Johannes Seiz, a pupil of Balthasar Neumann. 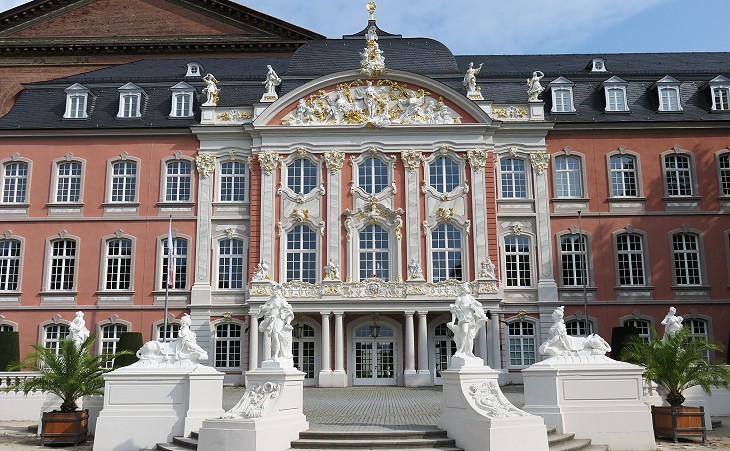 The Palace of the Electors and Bishops, a very handsome and extensive building, is now turned into a barrack.
John Murray - A Hand-Book for Travellers on the Continent - 1838
In 1794 the new very elaborate palace was turned into a barracks by the French and it continued to be used for the same purpose by the Prussians after 1815. Its gardens became a training ground for the troops. It was bombed during WWII. The reconstruction of the palace and the design of new gardens were completed in 1955. 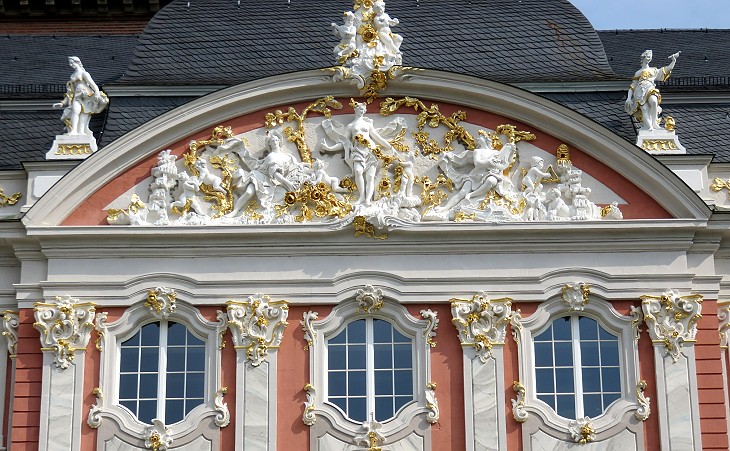