You may wish to see an introductory page to this section or a page on the Roman town first.
In this page: St. Maria in Kapitol, Gereonkirche, Pantaleonkirche and Cecilienkirche (Schnutgen Museum)

This city was destroyed by the Normans in 881, and afterwards it was repaired by the emperor Otho the Great, who subjected it to its bishops; but his grandson Otho III made it an imperial city about the year 993. The city was made an archbishopric ten years after that dignity was conferred on Mentz and the archbishop was honoured with the electoral office in 1021. Its privileges were considerably enlarged by Frederic I in 1180, after which it encreased prodigiously in power and grandeur especially in 1260, when it entered into the league of the Hans towns, and was made the capital of the fourth of their provinces. They had afterwards many disputes with their archbishops about the jurisdiction over them, refusing to submit to any thing inconsistent with their dignity of an imperial city. In this dignity it still continues though under some limitations settled by the emperor Maximilian I, for on a dispute between the archbishop and the burghers, it was decreed that the city and magistrates should have the determination of all civil causes, but in criminal none should be executed or pardoned, but with the archbishop's concurrence.
Thomas Nugent - The Grand Tour - 1749

Cathedral: (left) southern side; (right) western side; it was built very near a Roman gate

The Cathedral Church remains in a very imperfect State; it is Pity so fine a Beginning was never compleated. In the year 1162, the three pretended Kings who came to adore our Saviour, were brought from Milan into this Church; where Fame attributes many Miracles to them. They sell for a penny a Dozen little Billets or Notes, which have touched them, and communicate their Virtue.
Maximilien Misson - A new voyage to Italy: with curious observations on several other countries - First published in French 1691; English translation first published 1695
The cathedral dedicated to St. Peter is a large and magnificent structure, but not finished. Nugent
The object which first claims attention here is The Cathedral, which, though begun in 1248 (..) has remained up to the present time in a condition of a fragment and a ruin. (..) The King of Prussia, whose taste for the arts, and zeal for the preservation of ancient edifices, is equal to his liberality, has for many years past expended a considerable sum upon it.
John Murray - A Hand-Book for Travellers on the Continent - 1838
The completion of the Cathedral was in part based on some medieval drawings, but, when taking into account that modern construction techniques and materials were employed, the Cathedral can be considered more as a XIXth century Gothic Revival building, than as a medieval monument. 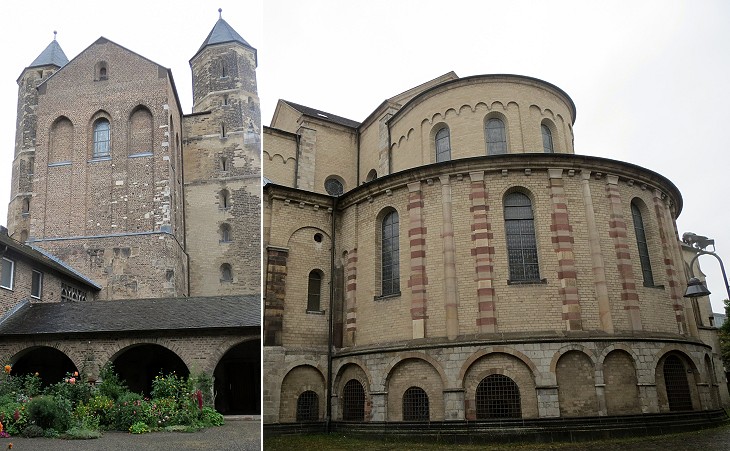 St. Maria in Kapitol: (left) front with entrance through the porch; (right) apse (you may wish to see that of St. Sernin at Toulouse)

It is in Rhenish Germany that the Romanesque assumes the most decided and individual character. (..) In this part of Germany we see a class of buildings having a certain link of connexion with each other and differing in their general description from any to be found elsewhere. (..) In the churches of The Apostles, St Cunibert, St Mary Capitoline and St Martin at Cologne, we meet with a simplicity of design and a classical correctness of proportion which is not often equalled. (..) These it may be observed, are not to be looked upon as rude relics of antiquity, but as rich and finished structures, among the latest of their style.
Rev. John Louis Petit - Remarks on Church Architecture - 1841
It is in the great towns on the Rhine which were in readiest communication with Italy, and rapidly grew into important trading communities, that we find the most brilliant examples of early German Romanesque.
Thomas Graham Jackson - Byzantine and Romanesque Architecture - 1913
Twelve historical churches of Cologne retain interesting Romanesque features, notwithstanding Gothic Revival additions and the destructive impact of WWII. 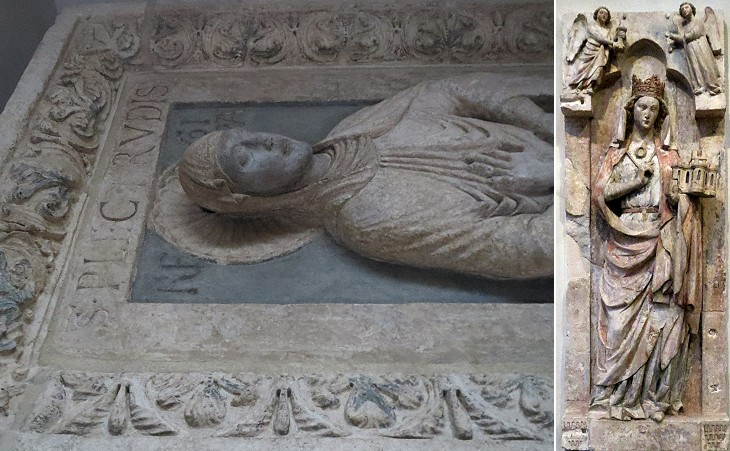 Santa Maria in Capitolio, so called because it occupies the very site of the capitol of the Roman city, is one of the oldest churches in Cologne, and stands on a height surmounted by a flight of steps: it dates from about the year 1000. An older church was founded on the spot, in 700, by Plectrude, the wife of Pepin (The Fat, a powerful Mayor of the Palace of the Merovingian kings and an ancestor of Charlemagne), whose tomb and effigy, both works of a very early period, are let into the wall, outside of the choir. Murray
In ca 50 AD, Emperor Claudius granted city status to Cologne and a Capitolium (a Roman temple - see that at Thugga) was built on this site. Some of its foundations lie under the church. 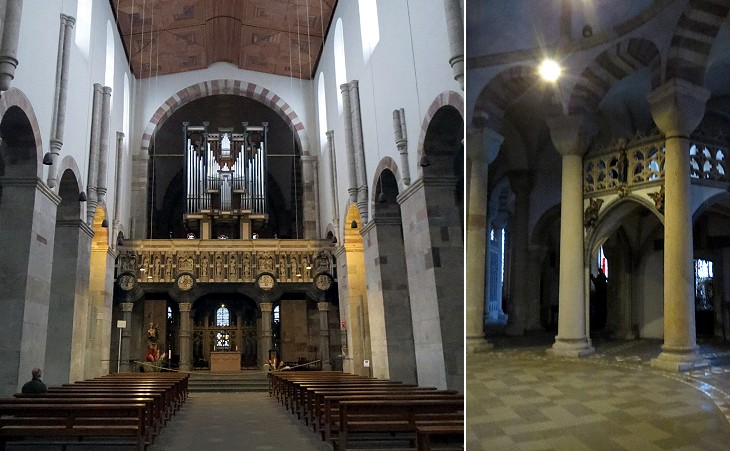 St. Maria in Kapitol: (left) interior; (right) one of the three apses

S. Maria in Capitolio, Great S. Martin, and the Apostles church are trilobate, the two transepts being apsidal, as well as the choir. S. Maria which was re-built and consecrated in 1047 has an ambulatory aisle round all three, which has a fine effect inside. (..) The details are very plain, there is no carving, there are cushion capitals everywhere; the columns of the apses are cylindrical, and have stilted Attic bases: the nave piers are plain rectangles with an impost moulding instead of a capital: there is no triforium, but a blank wall with round-headed clerestory windows above. The nave has later Gothic vaulting on shafts that have been added and are corbelled out above the nave piers. Jackson
The view to the apse is interrupted by a large Renaissance choir screen. The vault of the nave is modern because the Gothic one collapsed during WWII. St. Maria in Kapitol: (left) cloister of the monastery, the only surviving part of the building; (right) Romanesque-style medieval lion which supported a column

In 965 AD Archbishop Bruno I of Cologne, brother of Emperor Otto the Great, bequeathed in his will 100 pounds of silver and other gifts to the Church of St. Mary for the completion of the monastery and cloisters. A Benedictine monastery was added to the church at an unknown date. 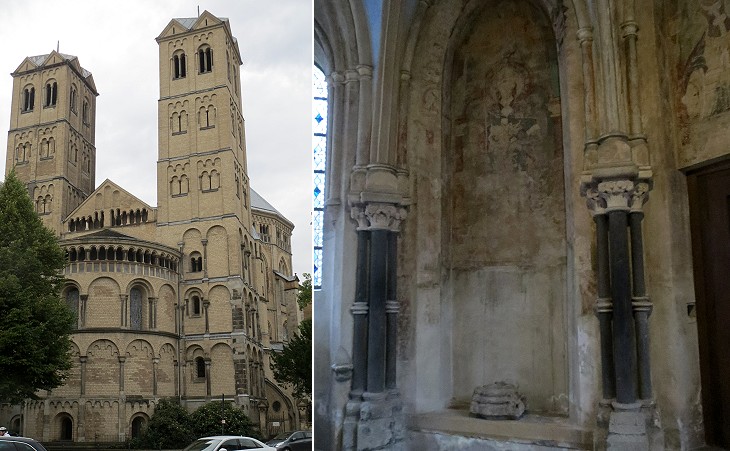 Gereonkirche: (left) view from the rear; (right) detail of the XIIIth century porch with later paintings

In the church of St Gereon they shew the heads of 1000 martyrs who are said to have suffered here in the reign of Maximianus. Tis generally believed that this church was built by the empress Helena and it has some resemblance with the Greek architecture of that age. In the choir there are several paintings with Latin inscriptions representing the history of that saint. Nugent
St. Gereon's Kirche, another ossuary, (..) is one of the finest as well as the most ancient churches in Cologne; the circular portion, or rather the decagon, was not finished till 1227, but the crypt between it and the towers, and the walls of the choir above it, date from the X. century. Murray
Ancient foundations have been found in the ground west to the church. 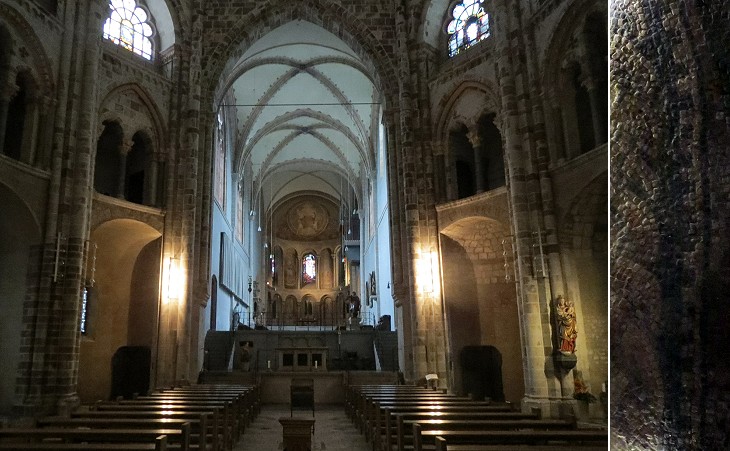 The layout of the church consists of two elements: a decagon with galleries and a nave ending with a large apse. The design of the decagon was inspired by that of the Palatine Chapel at Aachen and of S. Vitale at Ravenna. 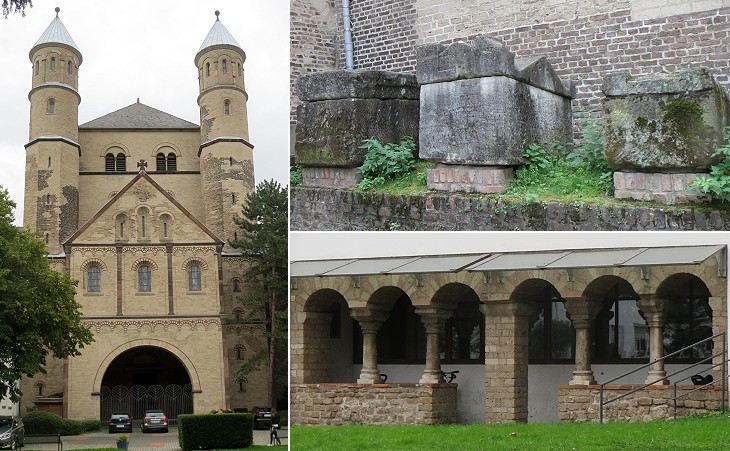 Pantaleonkirche: (left) façade; (right-above) sarcophagi with gabled lids on display on the northern side of the church; (right-below) remaining part of the cloister of a lost Benedictine abbey

The traveller who takes any interest in the study of Gothic architecture will feel much gratification in having his attention drawn to the numerous specimens of early Gothic which are to be found in Cologne. (..) The churches of St. Pantaleon, of St. Martin, and St. Cunibert, though they may be past over by the ordinary traveller, will highly interest the antiquary and student of Gothic architecture. (..) St. Pantaleon is, perhaps, the oldest Christian structure in Cologne, since the lower part of the great tower, and the walls connected with it, are probably not later than 980. It was built by Archbishop Bruno, with the materials of the Roman bridge, and Castle of Deutz. Murray 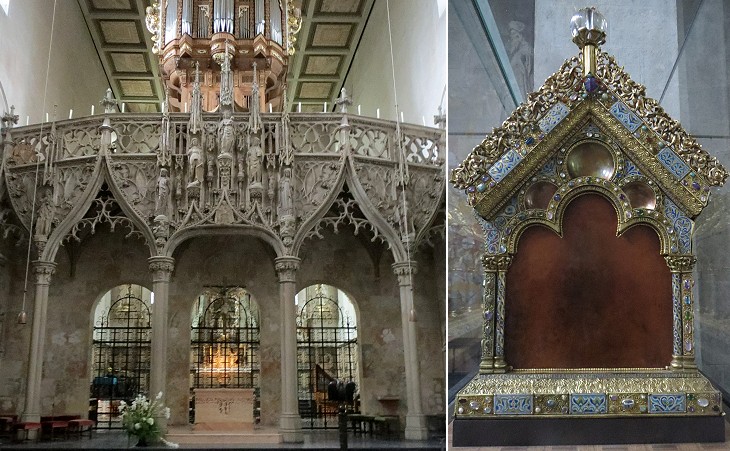 Around 870 AD, a church dedicated to the Greek martyr St. Pantaleon was built over the ruins of a Roman house. Theophanu, a Byzantine princess and the wife of German Emperor Otto II enlarged and renovated the church in ca 996, but other changes were made in the XIIth century. The building was severely damaged by bombings; the interior does not retain a medieval aspect, although restorers were able to reconstruct a Gothic choir screen; some XIIth century reliquaries, studded with jewels and enamels, escaped destruction. 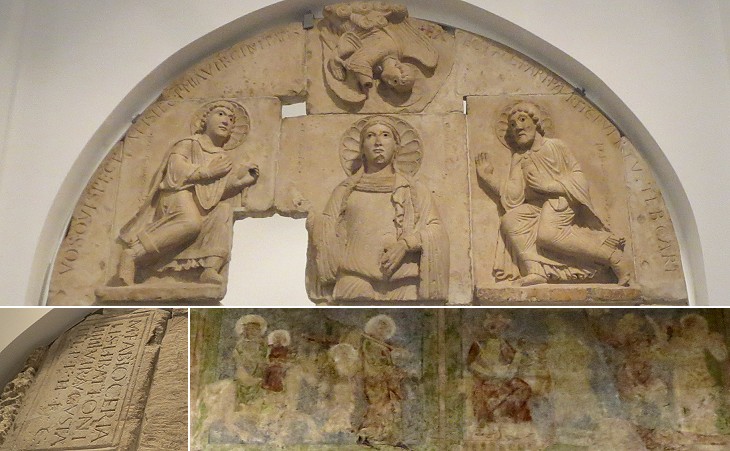 Cecilienkirche (see images of the church in the introductory page): (above) XIIth century relief from the portal of the northern side aisle; (below-left) a Roman gravestone with the name of M. Fabio Cerialis, a freedman, which was utilized in the construction of the church; (below-right) traces of frescoes

The church was built in the XIIth century and during its long history it was often modified. In 1956 it became the home of the Schnutgen Museum which originates from the collection of medieval artifacts gathered by Alexander Schnutgen (1843-1918), a member of the board of trustees of the Diocesan Museum. In 1906 he donated his collection to the City of Cologne and in 1910 a museum was inaugurated to house it. In 1945 the museum building was entirely destroyed, but its collections had been stored elsewhere. The image used as background for this page shows a detail of one of its exhibits, a baptismal font from St. Kolumba's, a lost Romanesque church. 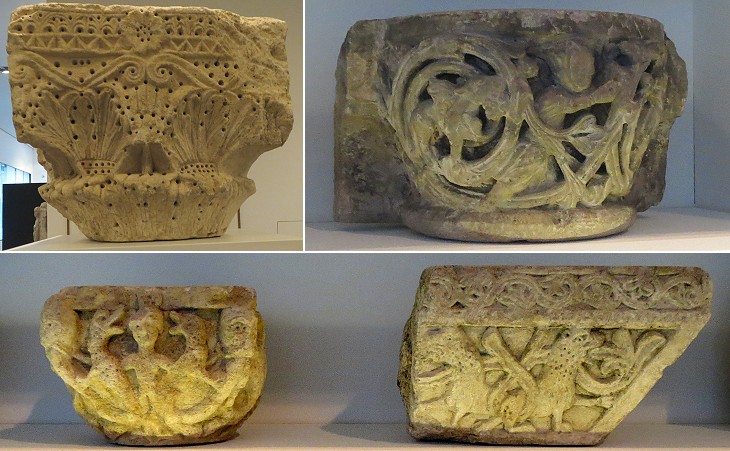 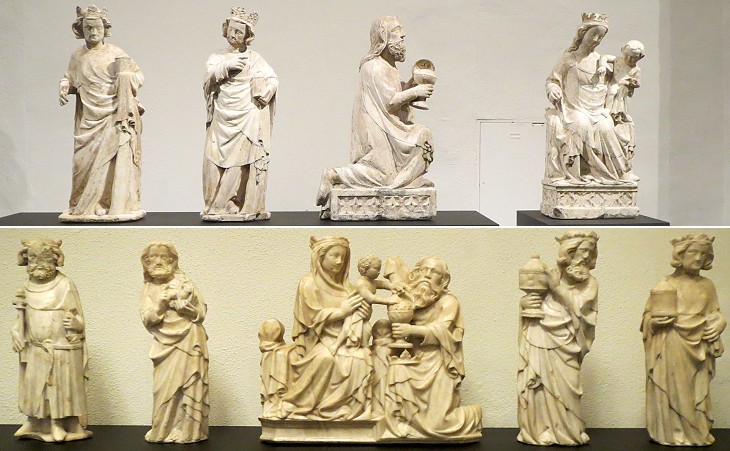 Schnutgen Museum: altars with statues of Magi from S. Maria in Kapitol (above) and the Cathedral (below); according to tradition the bones of the Magi are contained in a reliquary at the Cathedral 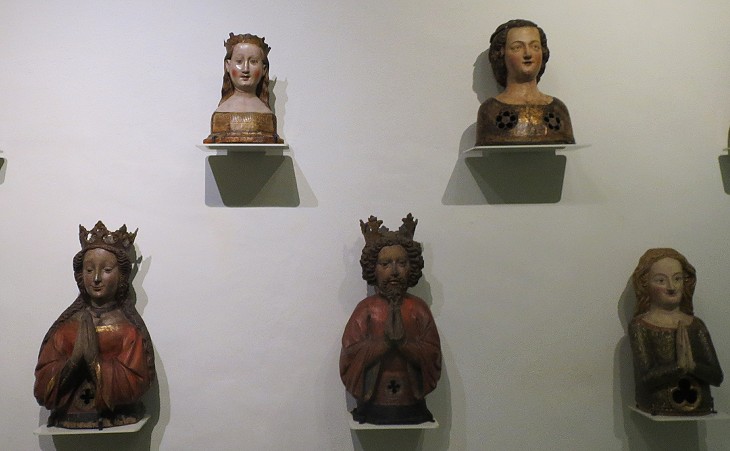 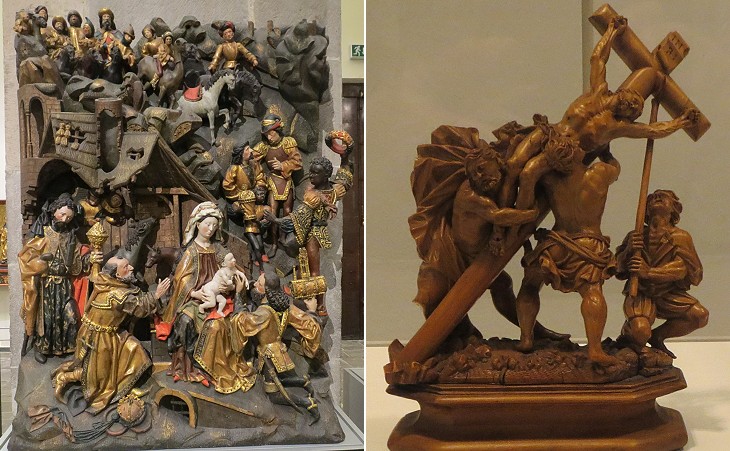