- Ahrweiler and its Roman Villa
(Bell tower of St. Gangolf's at Trier seen from Porta Nigra) 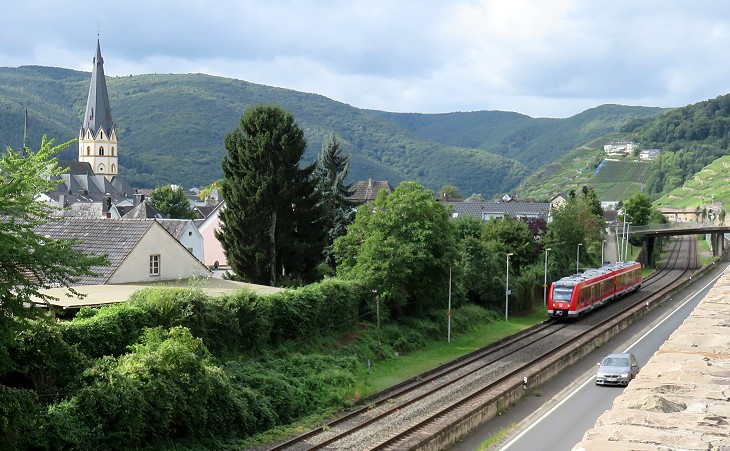 The most interesting points in the valley of the Ahr, esteemed by many as equal to the scenery of the Rhine, may be seen in one day and a half from Bonn, by setting out early; but it would be better to devote two days to the excursion.
John Murray - A Hand-Book for Travellers on the Continent - 1838
The Ahr River is a left tributary of the Rhine. It originates in the Eifel Mountains. Its 55mi / 90 km valley is rather isolated from the surrounding region and it was scarcely populated until the XIXth century. 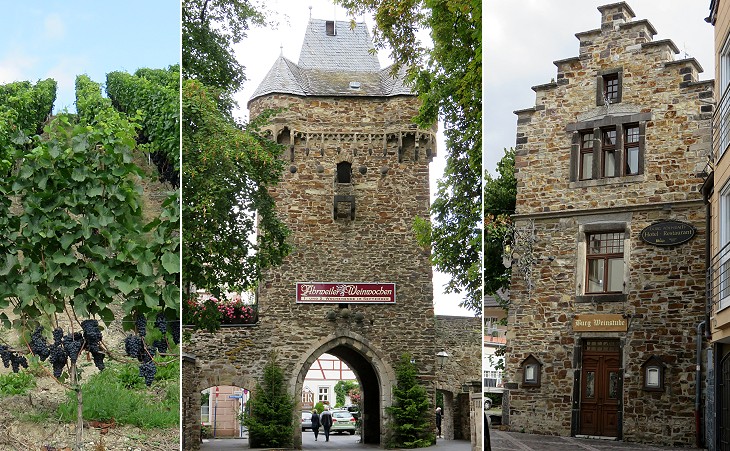 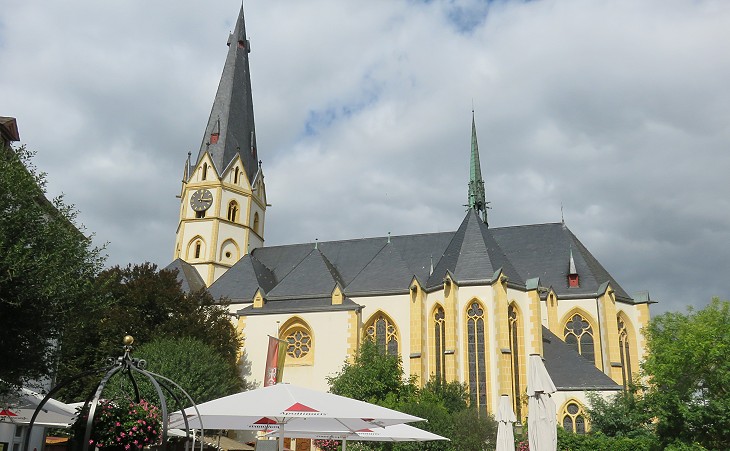 The church, a beautiful Gothic edifice, with a treble choir, was erected between 1245 and 1274. The town was burnt by the soldiers of Turenne, 1646, and suffered again from the French in 1688. Murray
The church was built when Ahrweiler and a part of the valley were annexed to the territories of the Archbishop-Elector of Cologne. 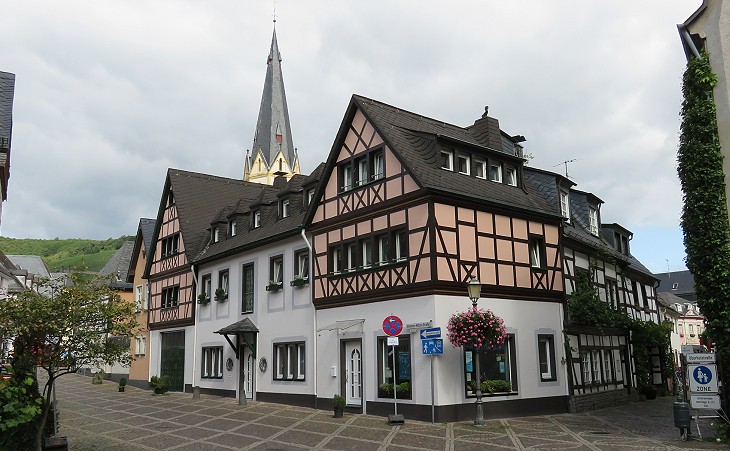 The town was greatly damaged during WWII. Today it has the aspect of a postcard medieval town, with pedestrianised lanes and half-timbered houses. In 1969 it was administratively joined with Bad Neuenahr, a nearby spa resort. Holidaymakers can spend the morning drinking mineral water and the evening getting drunk at a wine hall. 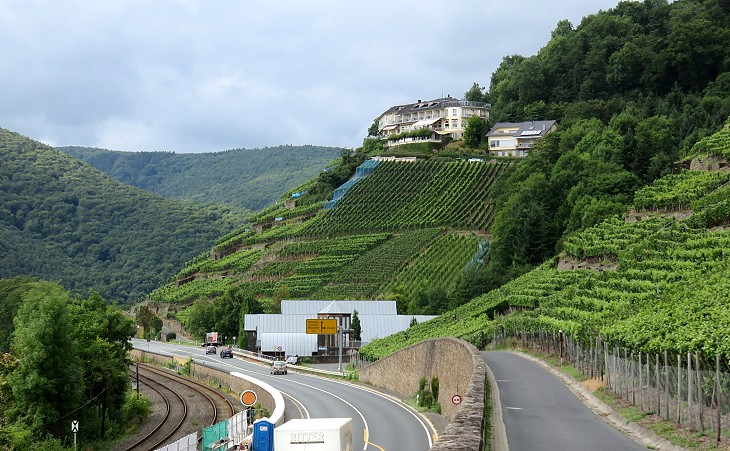 The Ahr valley was conquered by the Romans under Julius Caesar. In the following century a fortress was built at the mouth of the Ahr into the Rhine. It was called Rigomagus, hence today's Remagen which is best known for the bridge that the Allies crossed in March 1945. The valley was situated immediately north of the border between the Roman provinces of Germania Superior and Germania inferior. The suffix "weiler" derives from Latin villa, but it was not until March 1980 that chance excavations led to unearthing the site of a Roman villa. 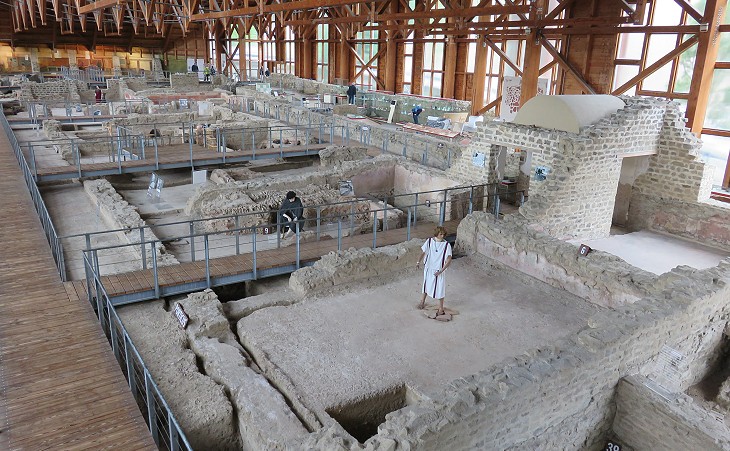 Overall view of the ancient buildings

Archaeologists found evidence of a house built in the middle of the Ist century AD which was replaced by a larger one at the end of the century. This was used as a residence for some two centuries, after which it was turned into an inn and later on into a smelting plant. In the Vth century it was entirely covered by a landslide. Archaeologists chose to partially reconstruct the residential building and to retain some elements of the previous and later constructions. 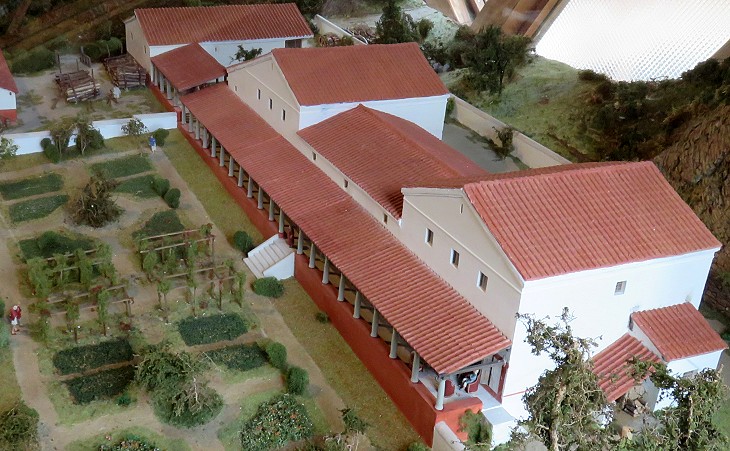 Model of the building when it was used as a residence

The building was preceded by a long portico which faced south-east and therefore enjoyed much sunlight. An eastern and a western wing were united by a smaller building. Small baths were situated at the end of the structure beyond a small courtyard. The reception halls in the smaller building were turned into facilities for the inn. The access to the villa was preceded by a kitchen garden in a first phase, while later on the portico stood directly on a road. 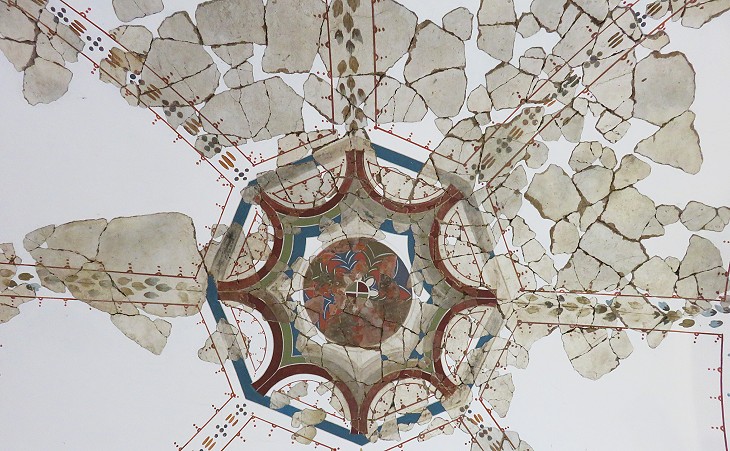 Barrel vaulted ceiling with fragments of paintings in a small room on the northern side of the building; the image used as background for this page shows a decorative pattern of the ceiling

Unlike other Roman monuments which greatly suffered from being used as a quarry, the villa of Ahrweiler was somewhat preserved by the landslide and many walls were found standing almost to the ceiling. A tiny hall still contained the painted fragments of plaster of its barrel vaulted ceiling. They suggest that the room was decorated with a fake garden, a very popular subject in Roman houses, both in Rome, e.g. at Villa di Livia and in the provinces, e.g. at Vichten in Luxembourg. 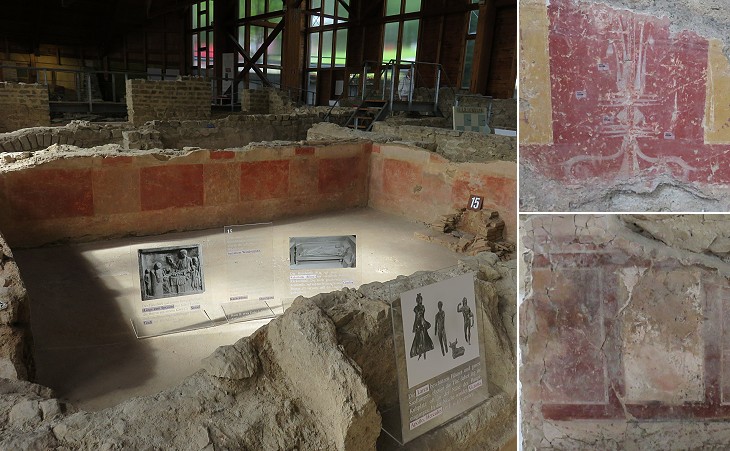 (left) Painted walls and original floor of Room 15; (right-above) detail of a decorative painting in the eastern corridor; (right-below) marble-like fresco in Room 1

It is very unusual not to find floor mosaics in a Roman villa. Their use was widespread and it was not limited to luxury residences (see the Tavern of Alexander and Helix at Ostia). Because in some rooms the floors were found in good condition with a layer of plaster and the walls were finely painted, it is possible that marble inlays (see those at Villa dei Quintili near Rome) were used to decorate them and that the marble tiles were sold when the building was turned into an inn. 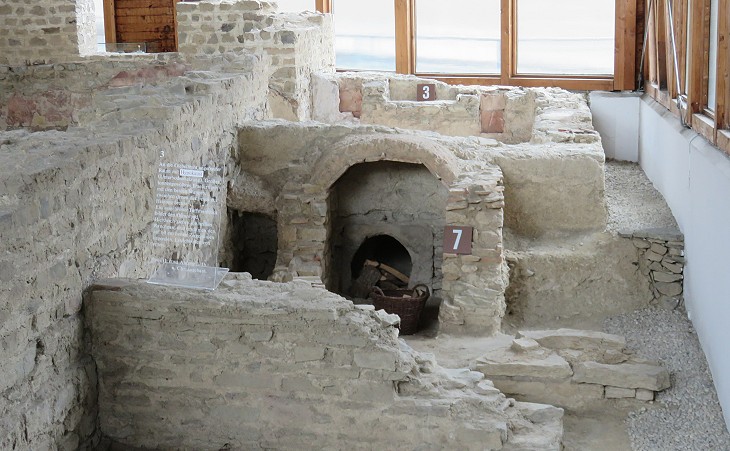 Furnace for heating a room

Room 3 was added to the building and it had a northern exposure, thus it was provided with hypocaust (under floor) heating via a furnace in an adjoining small space which had openings at the top of its walls to allow ventilation. The rooms had glass windows, so those who lived inside them enjoyed comforts we associate with modern life. 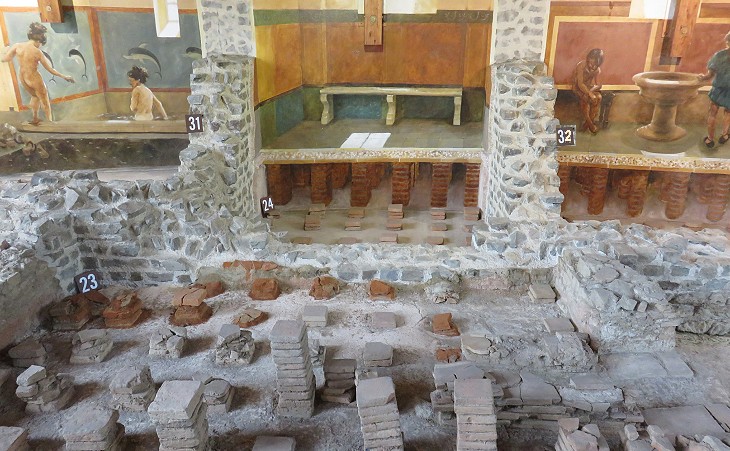 In the separate building which housed the baths a heated dressing room (23, apodyterium) gave access to a warm room (24, tepidarium) which was adjoined by a hot room (32, calidarium) and perhaps by a cold room (31, frigidarium) with a small pool (natatio). You may wish to see a page with a description of a day at a bath establishment by Seneca and with images of the Baths of Caracalla in Rome. 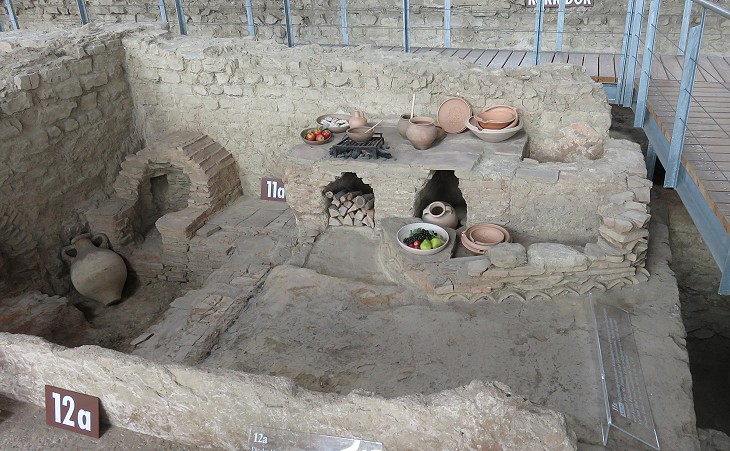 Kitchen of the inn

When the villa was turned into an inn (caupona) with some rooms for lodging, the reception halls near the entrance to the building were modified to allow for the preparation of food (11a, cocina) which in part was sold in an adjoining vending booth (12a, thermopolium) which could be directly accessed from the portico. You may wish to see some thermopolia at Pompeii and Ostia. 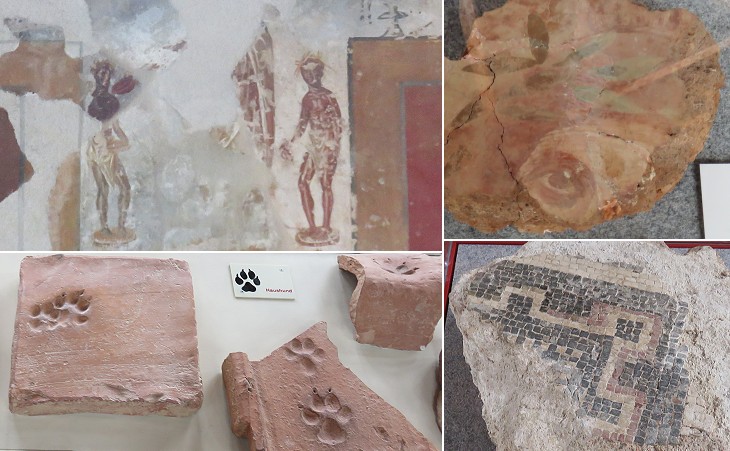 Small museum of the Roman villa: (above) fragments of frescoes; (below-left) brick tiles with footprints of a domestic dog; (below-right) fragment of a floor mosaic found in town