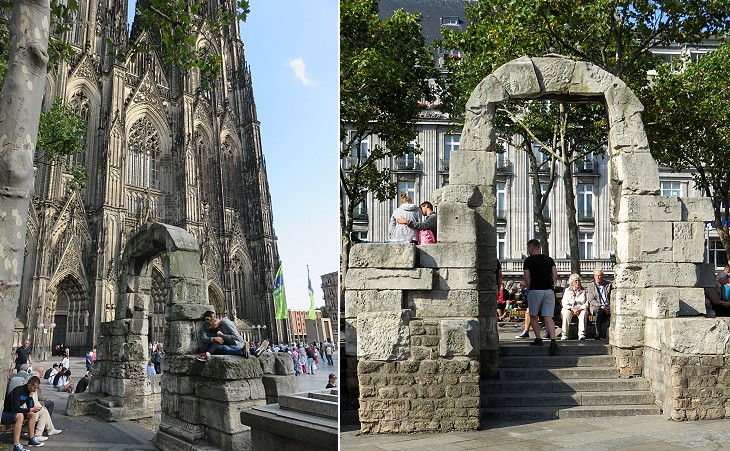 Julia Agrippina the GrandDaughter of that Agrippa and the Mother of Nero, (see a dedicatory inscription to the Emperor which was found at Cologne) having been born at Colen and being desirous to show the Power which she had by virtue of her second Marriage, which was with Claudius the Emperor, caused the Compass of the City to be enlarged, and, towards the Year of our Lord 48, she sent hither a Colony of Veterans to settle here. (..) The City of Colen is situate on the left Bank of the Rhine as it descends in a large open Valley and is encompass'd with a Country plentiful in Corn and Wine, and all things needful for humane Life. It lies something like a half Moon, has a modern Fortification about it, with a strong Wall that has Eighty three Towers in it, and a triple Ditch to defend it besides some necessary Out works.
Theophilus Dorrington - Some reflections made in a journey through Germany in the year 1698 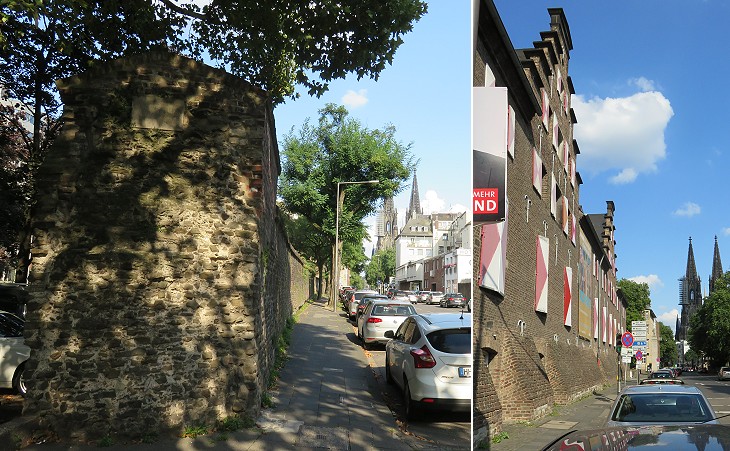 (left) Northern section of the Roman walls at Zeughass-Strasse; (right) Kölnisches Stadtmuseum (Museum of the City of Cologne) in a former artillery warehouse which was built in 1595 upon the Roman walls

The Ubians are ashamed of their German origin; though they have a particular honour to boast, that of having merited an establishment as a Roman Colony, and still delight to be called Agrippinensians, after the name of their founder: they indeed formerly came from beyond the Rhine, and, for the many proofs of their fidelity, were settled upon the very bank of the river; not to be there confined or guarded themselves, but to guard and defend that boundary against the rest of the Germans.
Tacitus - Germany - Translation by Thomas Gordon
Cologne is the capital of the archbishopric of Cologne and of the circle of the Lower Rhine in Germany. (..) By the ancients it was called Colonia Agrippina (actually "Colonia Claudia Ara Agrippinensium). (..) It had likewise the name of Colonia Ubiorum, because it was founded by the Ubii who removed to this country from the opposite side of the Rhine. During the Roman government it was the metropolis of Germania Secunda (or Inferior) and seems to have obtained the name of Colonia by way of eminence as being the most considerable Roman colony in those parts. (..) There are still some families remaining who pretend to be descended from the Romans and produce their genealogies from the first time this city was made a colony of the empire. (..) This city is governed by senators who have a great resemblance with the ancient senate of Rome. The government consists of six burgomasters (..) two of the burgomasters are regents annually by turns. (..) The archbishop claims the command of the militia and the defence of the city, so that it appears to be a sort of a mixt government. This prelate has two palaces in the city, but the inhabitants do not allow him to stay here above three days at a time, so that his usual residence is Bonn.
Thomas Nugent - The Grand Tour - 1749 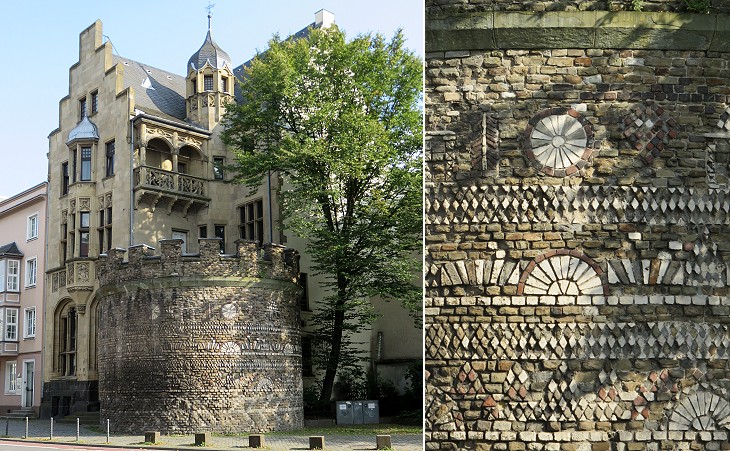 Cologne is the largest and wealthiest city on the Rhine, and has recently been made a free port, so that the navigation of the Rhine to its mouth being no longer impeded by the Dutch, this city is enabled to despatch vessels of its own to the German Ocean, or to foreign ports beyond. (..) Agrippina gave to it her own name, calling it Colonia Agrippina. A part only of its ancient appellation is retained in the modern name of Cologne. (..) In a large town like Cologne, where the objects of interest are spread over a wide space of ground, the following plan is suggested. (..) Begin with the Cathedral; (..) from St. Ursula to St. Gereon, past the Roman Tower, to the Apostles' Chapel.
John Murray - A Hand-Book for Travellers on the Continent - 1838
Authors of guidebooks and travel accounts had a lot to write about the history of Roman Cologne, but visitors to the city had little to see, apart from Romerturm. The tower was most likely built towards the end of the IIIrd century, but its battlements are the result of an inaccurate restoration. Its decoration dates from the period it was incorporated into a (lost) medieval nunnery. 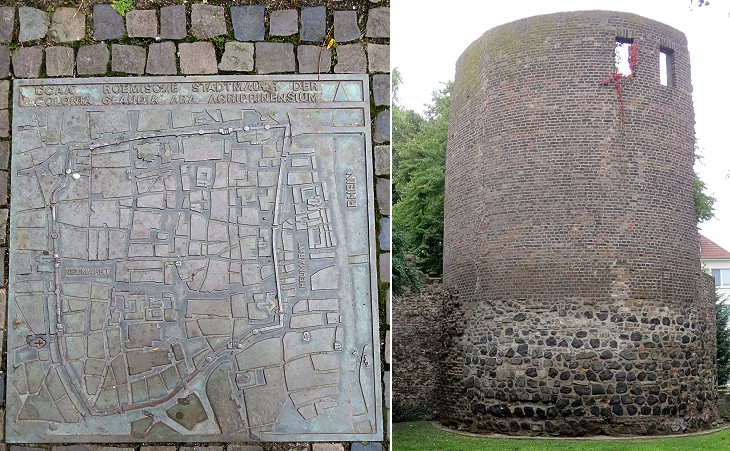 (left) Plan of the Roman walls; (right) Helena Tower in St-Apern-Strasse (dot in the plan)

The Roman city wall was almost four kilometres long and had at least nine gates and 19 round towers. Remains of this wall can still be seen in many parts of the city, although only the lower portion and the foundations are original. Recent excavations have proved that the city wall was erected at the end of the Ist century AD and was partially strengthened in the following centuries. As usual in Roman towns, the layout was a square one, with a minor irregularity on the southern side, because the walls followed the course of a small tributary to the Rhine (a number of tombs were found outside this section of the walls). 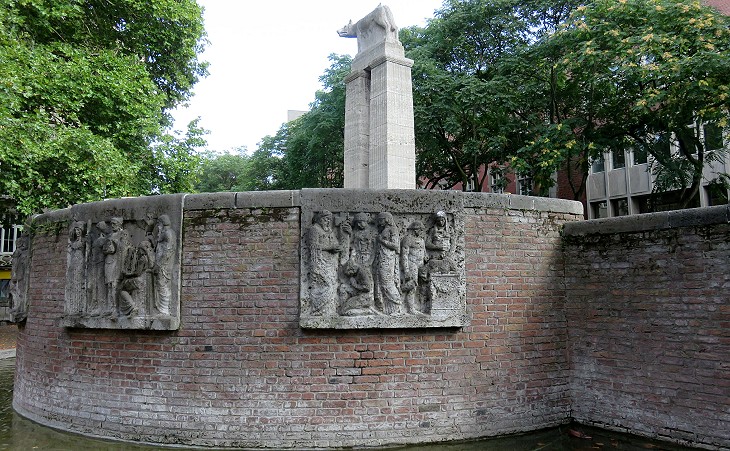 The fountain was erected in 1910-1915 to celebrate the foundation of Roman Cologne after the design and with sculptures by Franz Brantzky. It was decorated with a double column supporting a statue of the She-wolf of Rome and with reliefs portraying emperors or depicting scenes of the history of the ancient town. The monument was almost completely destroyed during World War II. In 1955 it was reconstructed in a different way by Karl Band, making use of the surviving elements. The remaining reliefs were placed on a brick wall resembling a tower of the Roman walls. 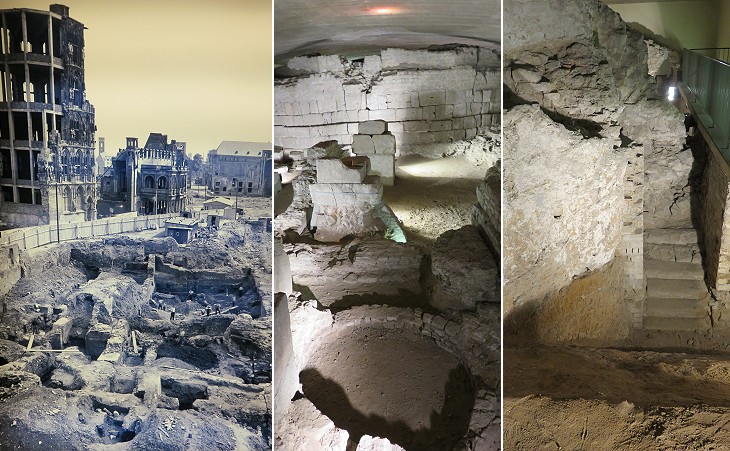 Cologne was heavily bombed during WWII. During its reconstruction a number of archaeological findings were made which shed light on the location of the main buildings of the Roman town. Because not all the findings were duly reported to the local authorities, in 1980 the Federal State of North Rhine-Westphalia passed a law requiring that formal archaeological investigations were to be carried out in historical areas before new construction projects were implemented. 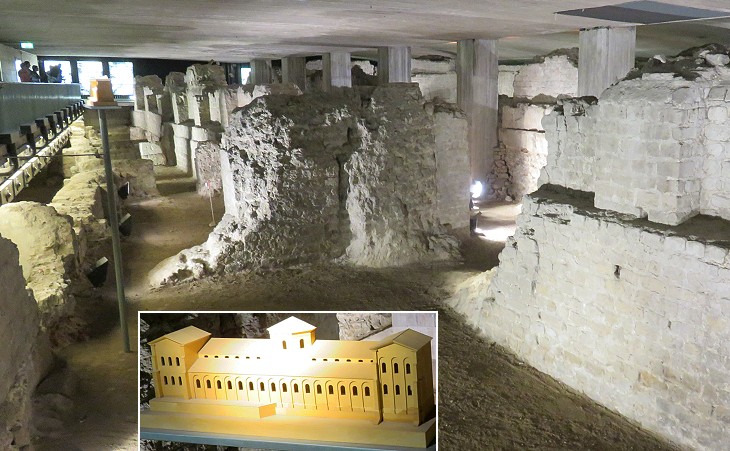 Archaeological Zone under Rathausplatz: walls of the Praetorium; (inset) model of the building

The Praetorium was erected at the beginning of the IVth century on the site of a previous one. It consisted of a long building with a central octagonal space and two high rectangular halls at its ends. It housed the administrative offices of the province in addition to the official residence of the governor, e.g. at Tarragona in Spain. Praetor was an important Roman magistrate, but praetorium meant also the headquarters of a military commander and by extension of a governor. Porta Praetoria was the main gate of a military town e.g. at Albano. 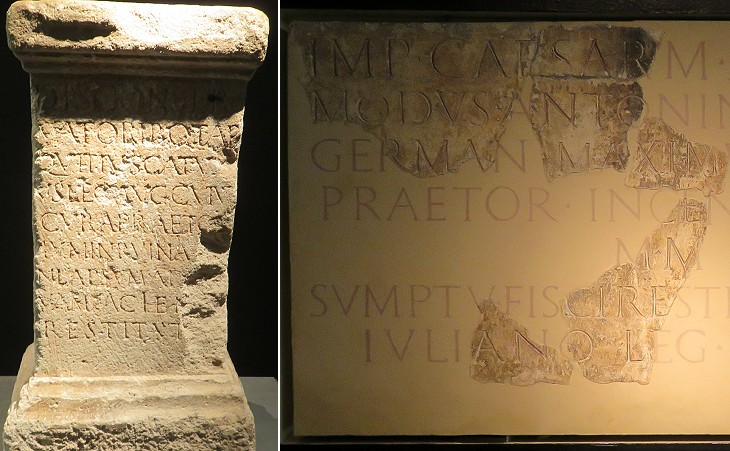 Inscriptions related to restorations of the Praetorium

That Cologne had a Praetorium was already known in 1630 when an inscription was found which indicated that "Q[uintus] TARQUITIUS CATULUS LEG[atus] AUG[usti] CUIU[s] CURA PRAETO[r]IUM IN RUINA[m] [co]LAPSUM AD [no]VAM FACIE[m] [est] RESTITUT[um]", i.e. that the governor had rebuilt the Praetorium which was in ruin. Although the inscription is not exactly dated it is thought it was made before another inscription celebrating the reconstruction of a porch of the building by Didius Julianus who was governor of the province in ca 180-185 and emperor for nine weeks in 193. 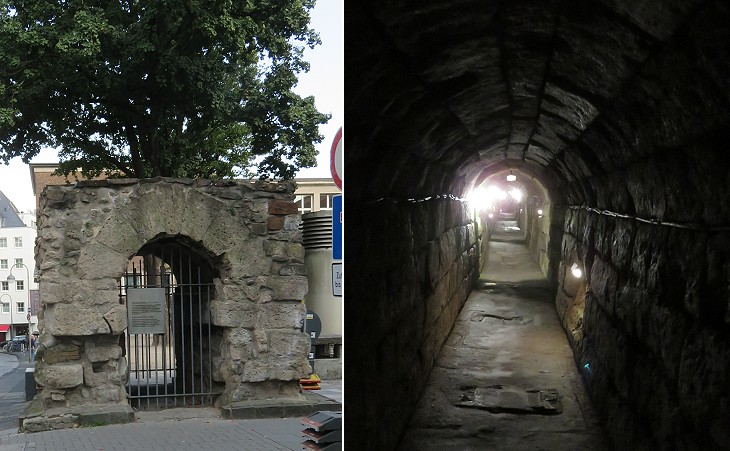 Roman sewers: (left) a reconstructed section at Theo-Burauen-Platz near Grosse Budengasse; (right) a section which can be reached from the Archaeological Zone

One of the main sewers ran under Grosse Budengasse, most likely the Decumanus Maximus, the main east-west street of the Roman town from the city wall to the Rhine. A part of it is reconstructed above ground. An underground section can be accessed from the Archaeological Zone. It had a width of 1.2 metres and its height varied from 2 to 2.5 metres; it had entrance shafts for conducting cleaning and repair works. The culverts partly served as cellars in the Middle Ages and they were used as air-raid shelters in WWII. 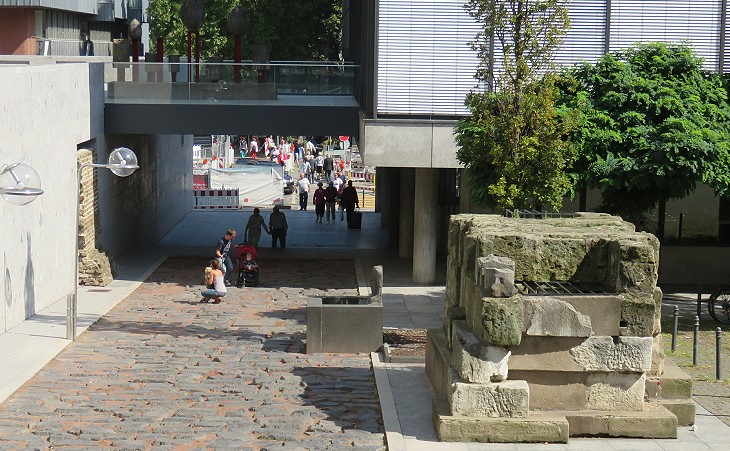 Section of a Roman road near the Römisch-Germanischen Museums

The basalt-paved harbour road, which led from the city to the harbour gate, now runs between the Romano-Germanic Museum and its administrative building. The road was excavated in 1970 and moved 6 metres to the south. Next to the harbour road is a reconstructed section of another sewer.
The image used as background for this page shows a head of Agrippina at the Museum.
Move to the Römisch-Germanischen Museum.