June 1812. Naszera is one of the principal towns of the Pashalik of Akka: its inhabitants are industrious, because they are treated with less severity than those of the country towns in general; two-thirds of them are Turks, and one-third Christians; there are about ninety Latin families; together with a congregation of Greek Catholics and another of Maronites.
Johann Ludwig Burckhardt - Travels in Syria and the Holy Land - 1822
Christ did few miracles in Nazareth, and staid but a little while. The people said, "This the Son of God! Why, his father is nothing but a carpenter. We know the family. We see them every day. Are not his brothers named so and so, and his sisters so and so, and is not his mother the person they call Mary? This is absurd." He did not curse his home, but he shook its dust from his feet and went away.
Mark Twain - The Pilgrims Abroad - 1869 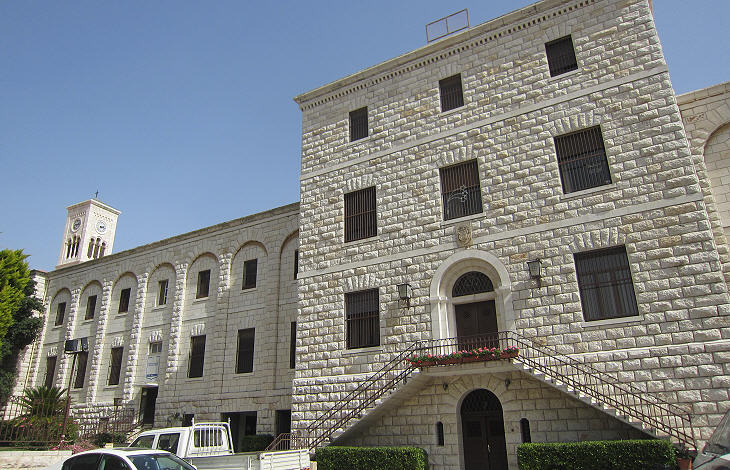 We went down a rocky hill to Nazareth, which is situated on the east side of a low ridge of hills that run to the south; there being another to the east of it in the same direction, and a very narrow valley between them; all the hills are of a soft white stone. The Latin fathers of the Holy Sepulchre have a large well built convent and church here, where I abode during my stay in this place.
Richard Pococke - A Description of the East and Some Other Countries - 1745
The principal curiosity of Nazareth is the convent of the Latin friars, a very spacious and commodious building, which was thoroughly repaired, and considerably enlarged in 1730. (..) The walls are very thick, and serve occasionally as a fortress to all the Christians of the town. Burckhardt
At half past four I alighted at the Roman Catholick convent, the finest in the Holy Land. It is indeed a very handsome building and has accommodation for twenty five monks though now there are only eleven. It was built originally by Helena. I was received by the monks with the greatest hospitality and I am very comfortably lodged in the room which is occupied by the superior of Jerusalem when he visits Nazareth.
William Turner - Journal of a Tour in the Levant - 1820 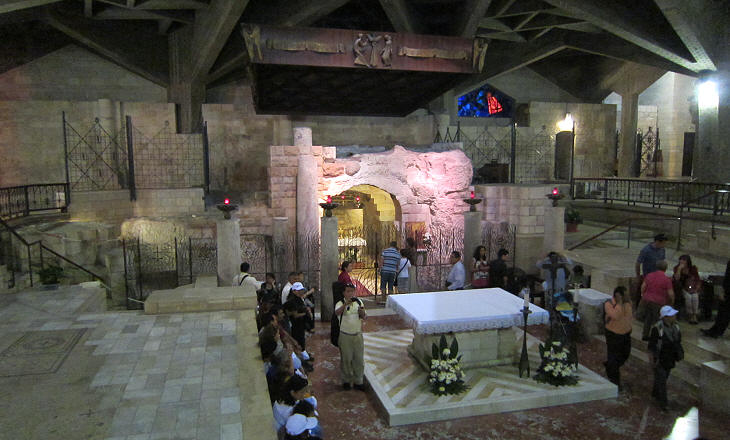 Church of the Annunciation: Lower Church with the grotto

Within it is the church of the Annunciation, in which the spot is shewn where the angel stood, when he announced to the Virgin Mary the tidings of the Messiah; behind the altar is a subterraneous cavern divided into small grottos, where the Virgin is said to have lived: her kitchen, parlour, and bedroom, are shewn. (..) The pilgrims who visit these holy spots are in the habit of knocking off small pieces of stone from the walls of the grottos, which are thus continually enlarging. Burckhardt
We entered the great Latin Convent which is built over the traditional dwelling-place of the Holy Family. We went down a flight of fifteen steps below the ground level, and stood in a small chapel tricked out with tapestry hangings, silver lamps, and oil paintings. A spot marked by a cross, in the marble floor, under the altar, was exhibited as the place made forever holy by the feet of the Virgin when she stood up to receive the message of the angel. So simple, so unpretending a locality, to be the scene of so mighty an event! Twain

The very scene of the Annunciation - an event which has been commemorated by splendid shrines and august temples all over the civilized world, and one which the princes of art have made it their loftiest ambition to picture worthily on their canvas; a spot whose history is familiar to the very children of every house, and city, and obscure hamlet of the furthest lands of Christendom; a spot which myriads of men would toil across the breadth of a world to see, would consider it a priceless privilege to look upon. It was easy to think these thoughts. But it was not easy to bring myself up to the magnitude of the situation. I could sit off several thousand miles and imagine the angel appearing, with shadowy wings and lustrous countenance, and note the glory that streamed downward upon the Virgin's head while the message from the Throne of God fell upon her ears - any one can do that, beyond the ocean, but few can do it here. I saw the little recess from which the angel stepped, but could not fill its void. The angels that I know are creatures of unstable fancy - they will not fit in niches of substantial stone. Imagination labors best in distant fields. I doubt if any man can stand in the Grotto of the Annunciation and people with the phantom images of his mind its too tangible walls of stone. Twain 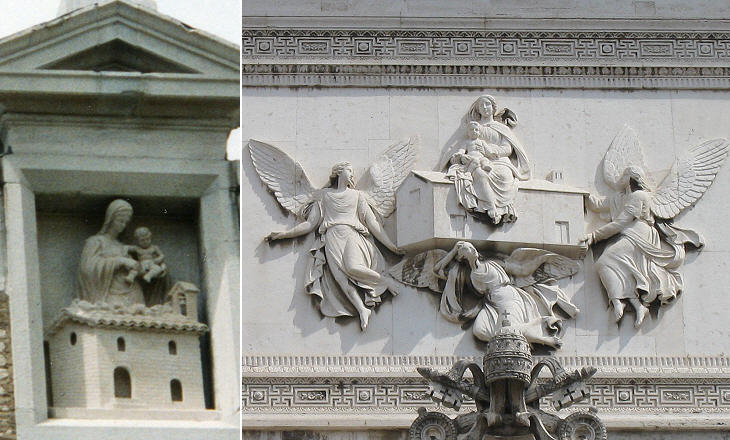 (left) Relief on a gate of Loreto; (right) relief at S. Salvatore in Lauro in Rome

The church is mentioned by the writers of the seventh and twelfth century. It is said to be built over the place where the house of Joseph and Mary stood, and they shew the spot, from which, they say, the holy house of Loretto was removed; there is a descent to it by steps, and within it there is a grot cut out of the soft rock, to which, it is said, the house adjoyned, so that the grotto was part of their habitation. Pococke
The house of our lady of Loretto is fabled to have been carried from this grotto, which the Padre assured me it exactly fitted before it was enlarged. Turner 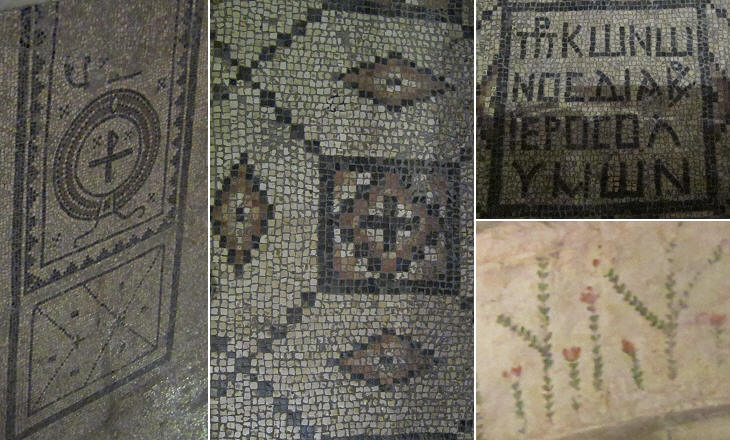 (left) Mosaic of the Wreath, a VIth century mosaic which according to Father Emmanuele Testa is a complex depiction of Heaven; the wreath surrounding the monogram of Christ represents the Trinity. A break in the wreath is the passage through which the faithful acquires knowledge of God. The lower rectangle has other meanings; (centre) another ancient mosaic; (right) inscription and decorative fresco of Konon's Cave, a small cave near the main one. Konon was a deacon from Jerusalem who is mentioned in the inscription

It is an imposture - this grotto stuff - but it is one that all men ought to thank the Catholics for. Wherever they ferret out a lost locality made holy by some Scriptural event, they straightway build a massive - almost imperishable - church there, and preserve the memory of that locality for the gratification of future generations. If it had been left to Protestants to do this most worthy work, we would not even know where Jerusalem is today, and the man who could go and put his finger on Nazareth would be too wise for this world. The world owes the Catholics its good will even for the happy rascality of hewing out these bogus grottoes in the rock; for it is infinitely more satisfactory to look at a grotto, where people have faithfully believed for centuries that the Virgin once lived, than to have to imagine a dwelling-place for her somewhere, any where, nowhere, loose and at large all over this town of Nazareth. Twain 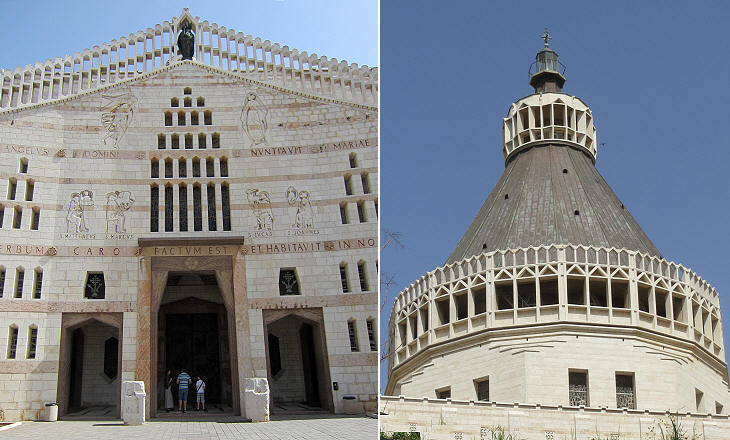 The church is the finest in Syria, next to that of the Holy Sepulchre at Jerusalem. (..) The Christians of Nazareth enjoy great liberty. The fathers go a shooting alone in their monastic habits to several hours distance from the convent, without ever being insulted by the Turks. (..) The guardian has still much influence in the town, because he is supposed, as usual, to be on, good terms with the Pasha. Burckhardt
In the 1960s Italian architect Giovanni Muzio designed a new gigantic church which replaced that built in the XVIIIth century and which was too small to accommodate the growing number of pilgrims who visited Nazareth. It is embellished with modern works of art by artists from all over the world, but their different styles convey the idea of visiting an art exhibition, rather than a shrine. 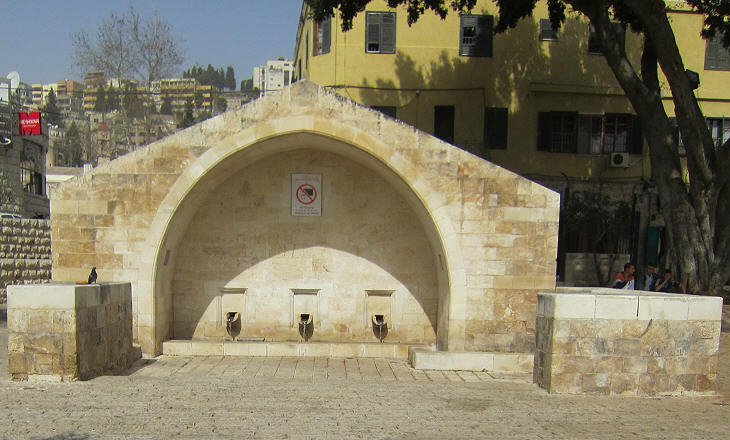 Fountain of the Virgin

At Nazareth we camped in an olive grove near the Virgin Mary's fountain. (..) This "Fountain of the Virgin" is the one which tradition says Mary used to get water from, twenty times a day, when she was a girl, and bear it away in a jar upon her head. The water streams through faucets in the face of a wall of ancient masonry which stands removed from the houses of the village. The young girls of Nazareth still collect about it by the dozen and keep up a riotous laughter and sky-larking. The Nazarene girls are homely. Some of them have large, lustrous eyes, but none of them have pretty faces. Twain 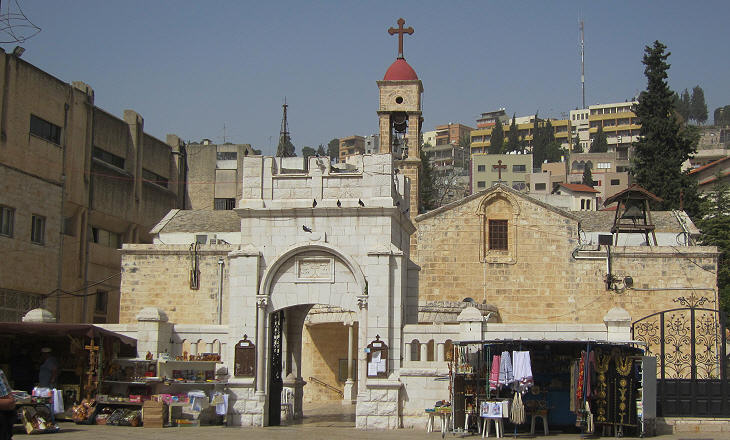 Orthodox Church of the Annunciation aka St. Gabriel's (XIXth century)

About a furlong to the north of the village is a fountain, over which there is an arch turned; it runs into a beautiful marble vase, that seems to have been a tomb. Beyond it is a Greek church under ground, where the Greeks say, the angel Gabriel first saluted the blessed virgin; there is a fountain in it, and formerly there was a church built over it. Pococke
I visited the fountain of the Panagia in the church of the Greek convent within the village. The water from being shut up in a hot church which was very dark, is nearly tepid. Outside of the church is a fountain at which were watering not fewer than 500 camels, horses, cattle, etc. Among the village women filling their pitchers I distinguished some pretty girls. The water in Nazareth is excellent. Turner 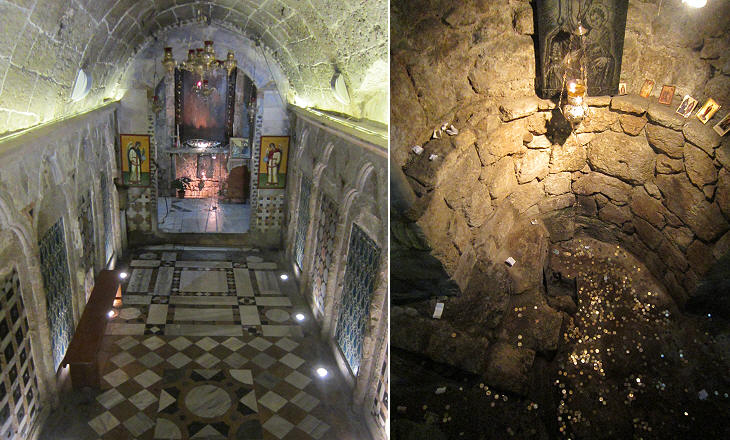