You may wish to see an introductory page to this section or the initial page on the Forbidden City first.

The Inner court, the northern section of the Forbidden City, was reserved to the imperial family; eunuchs were at the head of the imperial court staff. Similar to what occurred in the Ottoman Empire, very often eunuchs acquired great power and held key military positions. 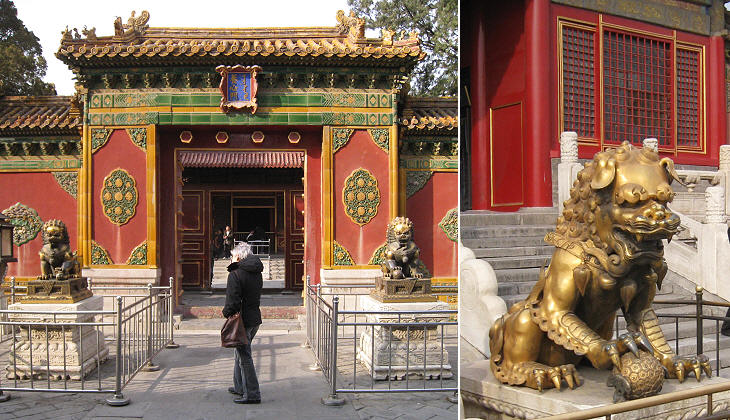 The private residences of the members of the imperial family consisted of low buildings surrounding a central courtyard; the entrance was protected by pairs of guarding lions; those of the Qing period have definitely no resemblance to the animals they should portray.

(left) An alley in the Inner Court; (right) a screen in a courtyard

The prevalent colour of the walls is red, which in Chinese culture had a positive connotation: it represented fire, one of the five elements of the universe, and the south, the most favourable cardinal point. The association of Communism with red was emphasized by the Chinese government: red book of President Mao Zedong, red guards and The East is Red, a very popular song during the Cultural Revolution.
Doors were located in the southern wall of the courtyards in order to facilitate the entrance of positive energy, whereas screens were placed immediately after them to stop evil spirits. 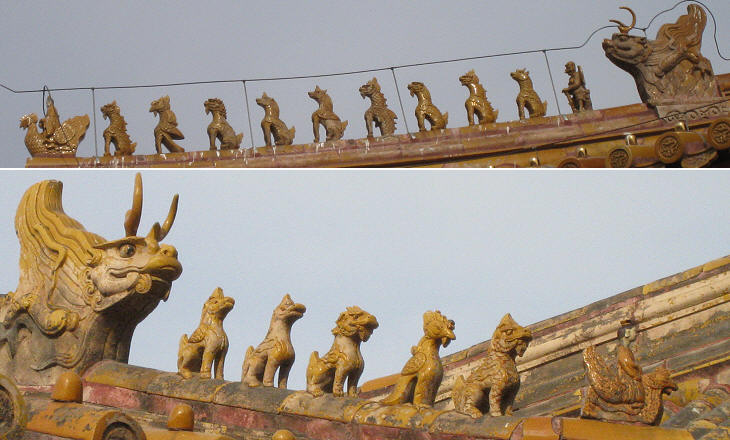 Each corner of each roof of the Forbidden City is decorated with rows of small glazed ceramic figures; the procession is opened by a man riding a phoenix; then there is a series of five or nine mythical beasts: these are watched by another figure (similar to a monkey) holding a cane. Finally a gigantic dragon representing the power of the emperor closes the procession. 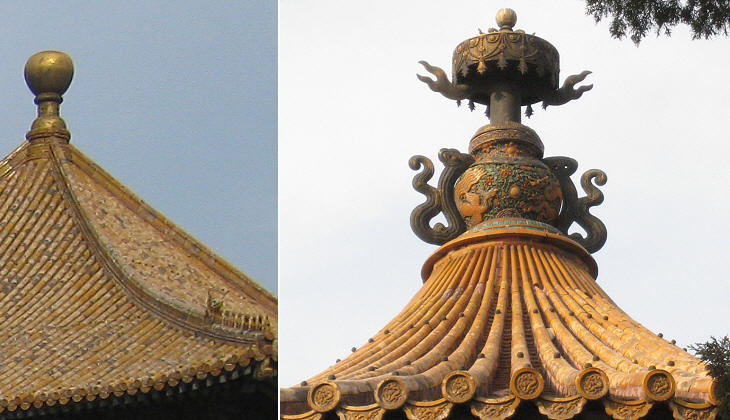 The symmetry which characterized the design of the Forbidden City led to the construction of wide rectangular buildings which were placed one behind the other along three parallel north-south axis; this layout signified intellectual and spiritual balance. Circular roofs meant Heaven; they characterized temples and they were usually covered with dark blue/black tiles; so it is very unusual to see a circular roof with yellow tiles. 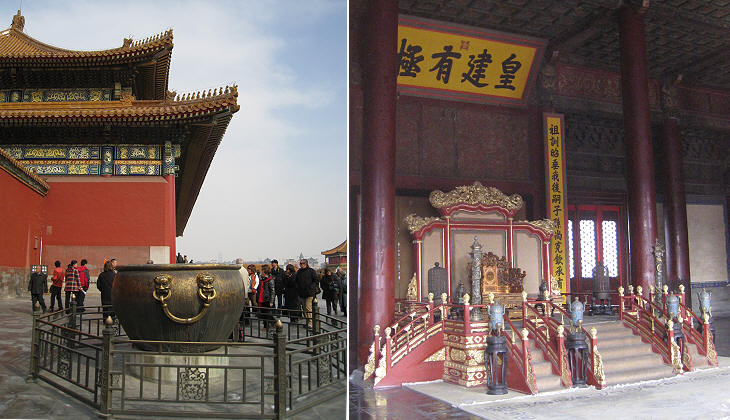 (left) Water tank to be used in case of fire; (right) throne in the Hall of Preserving Harmony

The ceilings of the halls were supported by gigantic wooden structures; the Chinese developed an elaborate system of joints to link the supporting columns to the beams and to the roof; they did not use nails. After a series of fires, large bowls filled with water were placed near the main halls. 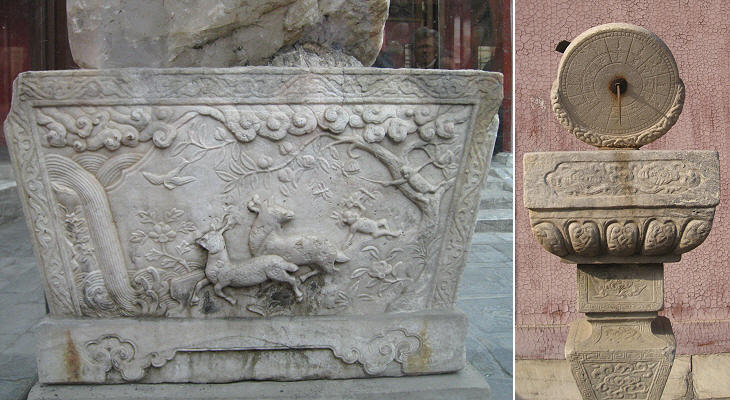 (left) A relief without dragons; (right) a sundial

In the middle of the steps leading to the terraces of the ceremonial halls, there is always a relief portraying a dragon on a background of clouds and mountains. Dragons, sometimes with phoenixes, appear on the decoration of balustrades and in other parts of the Forbidden City; it is possible however to see some more original examples of reliefs. 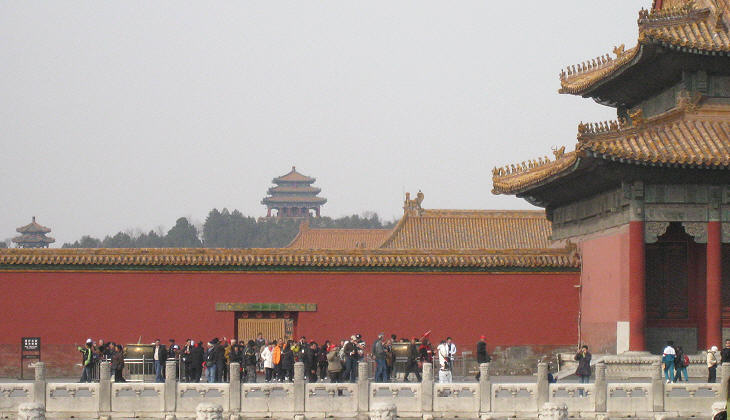 Jingshan (or Feng Shui/Coal) Hill seen from the Forbidden City

According to Feng shui rules a town or a palace should be built at the southern foot of a hill/mountain. Because Beijing is located in a flat area of the country, Emperor Yongle, the founder of the Forbidden City, ordered an artificial hill to be built immediately to the north of his residence; its official name is Jingshan (Prospect Hill), but it is not the only one.

The name of the hill is fully justified by the view over the Forbidden City, which is particularly impressive in the evening when the sun lights the yellow tiles. The view makes it easy to understand the overall design of the buildings. The north-south axis which characterized the Forbidden City continued beyond Jingshan Hill with a road leading to two towers where drums and bells gave the time to the inhabitants of Beijing.