Links to this page can be found in Book 9, Day 5, View C9, Rione Campitelli and Rione Ripa. 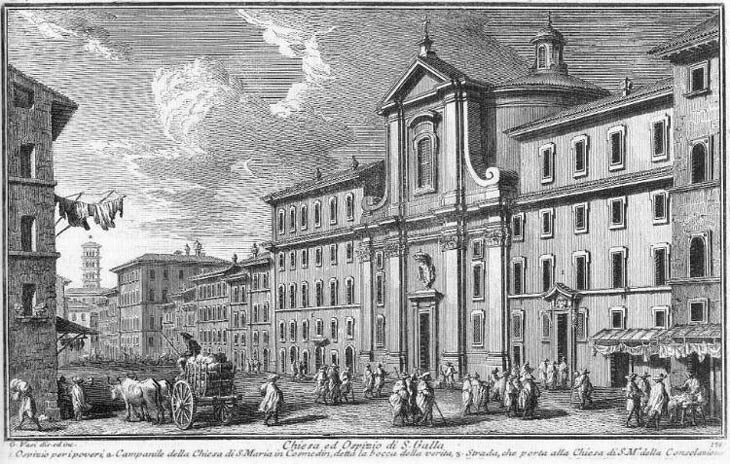 This 1759 etching by Giuseppe Vasi shows a very busy corner of Rome near Piazza Montanara where peasants gathered on market days for their shopping, or for having a letter written by a scribe or for having an aching tooth removed by a barber. Some of them called at the hospice adjoining the church of S. Galla to spend a night in town. The church housed a miraculous image of the Virgin Mary which halted a pestilence in 1656. After Pope Alexander VII relocated the image to S. Maria in Campitelli, the old church and the adjoining buildings were bought by members of the Odescalchi family (relatives of Pope Innocent XI). They founded a hospice for the poor which was part of Ospedale della Consolazione. The church was renamed and in 1683-1692 it was redesigned by Mattia De Rossi and Carlo Buratti.
The view is taken from the green dot in the 1748 map below. In the description below the plate Vasi made reference to: 1) Ospizio di S. Galla; 2) Bell tower of S. Maria in Cosmedin; 3) Street leading to S. Maria della Consolazione. The small map shows also 4) Portico di Monte Caprino. The dotted line in the small map delineates the border between Rione Campitelli (upper left corner) and Rione Ripa. 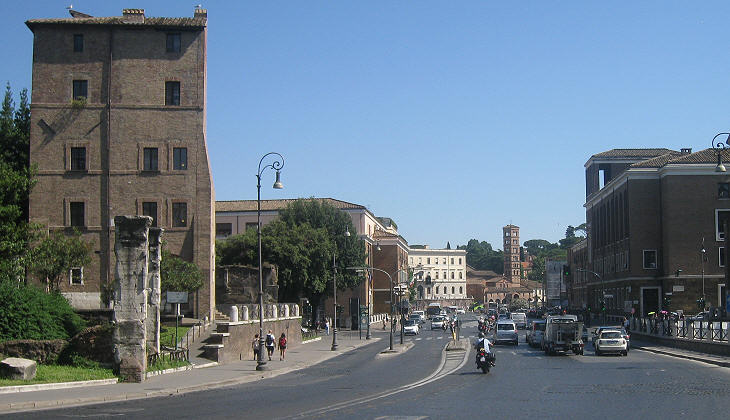 In 1926-1930 the lively neighbourhood shown in the plate was almost entirely demolished to open Via del Mare, a new road linking the city centre with the southern part of Rome and eventually with Lido di Ostia, its modern beach. 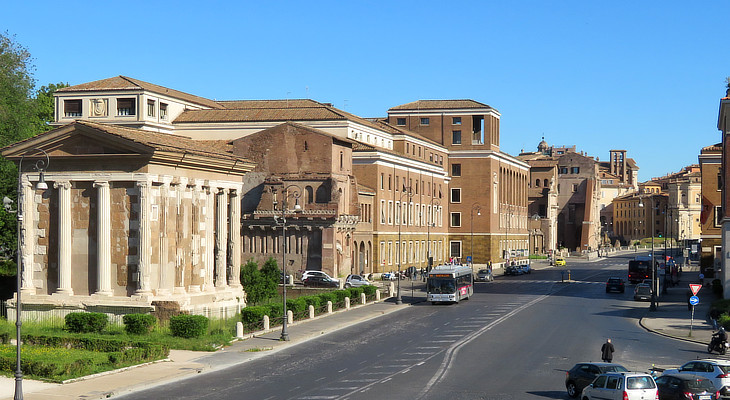 Via del Mare seen from near S. Maria in Cosmedin with on the left side Tempio di Portuno, Palazzo di Pilato, Palazzo dell'Anagrafe, S. Niccolò in Carcere and Teatro di Marcello

Several buildings on the southern side of the new road were deemed of artistic and historical value and were not affected by changes and some were given more visibility, but S. Galla was considered one of many uninteresting baroque churches and with its hostel it was pulled down to make room for Palazzo dell'Anagrafe, a large building housing offices of the City of Rome. 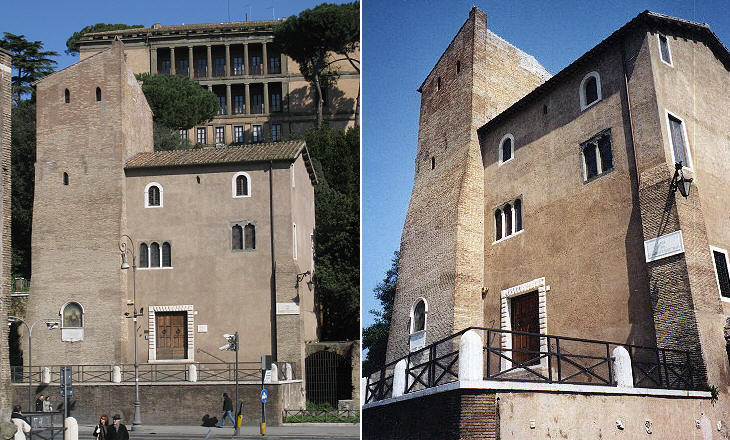 On the northern side of the road only the tall house with the hung washing shown on the left side of the plate was spared; its medieval appearance was enhanced by an imaginative restoration. The tower might have belonged to the Pierleoni who had other properties in the area. 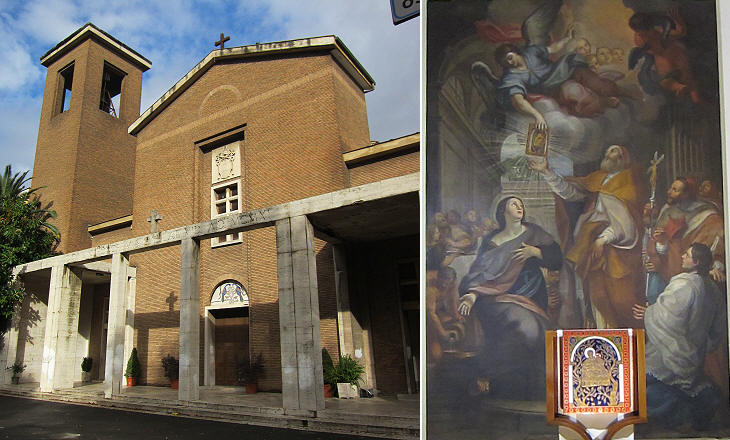 St. Galla was a Roman matron who in the VIth century housed the poor in her house, which became eventually a church with an attached hospice.
In 1940 a new church dedicated to her was built near la Garbatella, a new development outside the walls, where many of the inhabitants of demolished quarters of Rome were transferred. The church was designed by Tullio Rossi and it houses a late XVIIth century painting which was in old S. Galla. 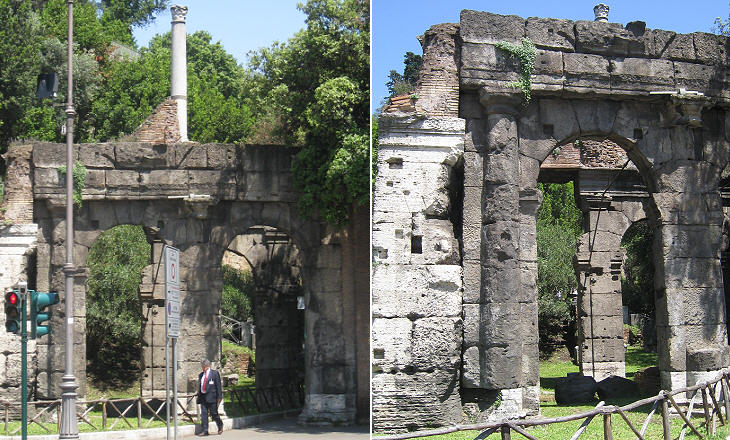 Views of the portico

The pulling down of some medieval houses led to discovering that they had been built making use of a very old Roman portico; it is located at the foot of Monte Caprino, the southern peak of the Capitoline Hill, which after the fall of the ancient buildings became a pasture for goats (It. capra). Some archaeologists believe the portico to be Porticus Triumphalis, a sort of arch of the Ist century BC on the path followed by triumphal processions. 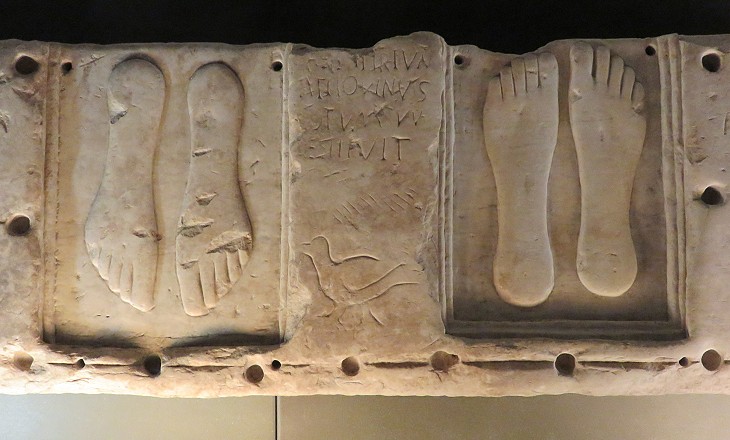 Musei Capitolini: ex-voto to (Juno) Caelestis, a goddess of Carthaginian origin, which was found in 1939 near Portico di Monte Caprino. It was made to thank the goddess for a safe journey. It is similar to the relief at Domine Quo Vadis and to one found at Italica in Spain. You may wish to see the temples dedicated to Caelestis at Thugga and Thuburbo Majus in today's Tunisia 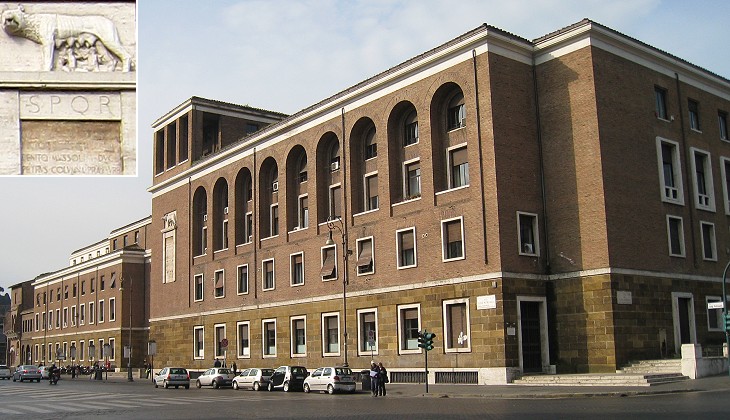 Main façade; (inset) the She-wolf of Rome and a poorly erased inscription

This imposing building designed by Cesare Valle on the site of the old hospice has a rather lacklustre name: anagrafe means registry office. The inscription celebrating its completion still bears the name of Mussolini and his title Duce (leader); a second name is mentioned: that of Piero Colonna, a member of a noble family very strictly linked with the Holy See, who was Governor of Rome between 1936 and 1939.