According to the traditional account St. Dominic brought the first orange trees to Rome; they were a gift for Pope Honorius III (born Cencio Savelli) who had granted him authority for the foundation of Ordo Praedicatorum (Order of the Preachers or the Dominican Order). The Pope, also for security reasons, preferred to live in Rocca Savella, a fortified site near S. Sabina and the first trees were planted in the cloister of that monastery.

The apse of S. Sabina

Over the years Rocca Savella was abandoned and eventually it became the kitchen garden of the Dominican monks of S. Sabina.

In 1932 the area was acquired by the Italian government and turned into a public garden. In memory of St. Dominic's gift to the pope it was planted with orange (and pine) trees. The fruits are not edible, but in winter their bright colours are heart warming. The image used as background for this page shows an orange tree.

The terrace on Easter Monday 2008

The terrace offers striking views over Trastevere, the Vatican, Campo Marzio and Campidoglio. In summer Giardino degli Aranci is one of the venues of Estate Romana. 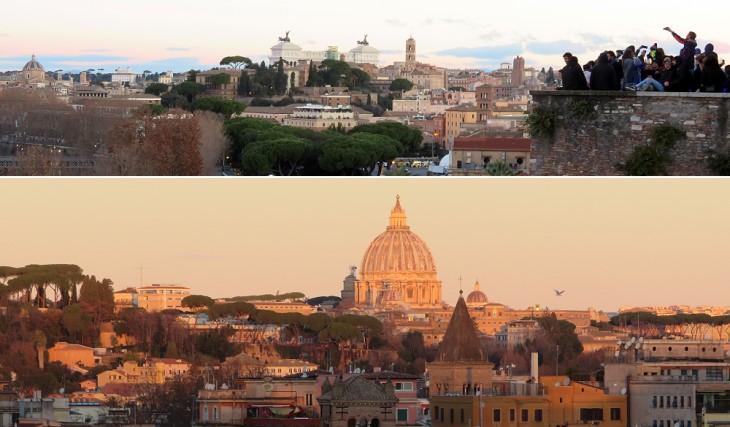 You can see this view in a 9,912x568 image (1.7MB). The image is accompanied by a second one of the same size which highlights the main monuments and has links to pages showing them.