Now in the place where Herod beat them (Jewish allies of the Parthians), and killed a great number of them, there he afterward built a citadel, in memory of the great actions he did there, and adorned it with the most costly palaces, and erected very strong fortifications, and called it, from his own name, Herodium.
Flavius Josephus - The Wars of the Jews - Chapter 13:7 - Translation by William Whiston
Josephus was the leader of the First Jewish Revolt in Galilee and in 67 AD he was captured by Roman general Vespasian who became emperor two years later. Josephus, who had prohesied the event, became an adviser to Titus, Vespasian's son, during the rest of the campaign. He was eventually freed and became a Roman citizen. Consistent with the Roman practice he added to his name that of the gens Flavia, the family of Vespasian and Titus. He then wrote several books on the history of the Jews which are the main source of information for historians and archaeologists on many events which occurred during the First Jewish Revolt and in the century which preceded it. 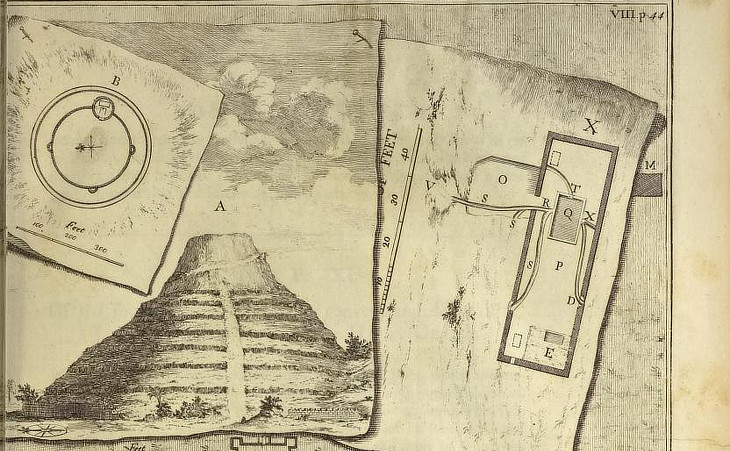 We went along a plain ground, to the foot of what they call the mountain of the Franks. (..) There is a tradition, that the knights of Jerusalem, during the holy war, held this place forty years after Jerusalem was taken, which was the reason of its being called the mountain of the Franks; and it is probable, that they might have kept this place some time after they lost Jerusalem, as it was a fortress very strong by nature. (..) It is a single hill, and very high, and the top of it appears like a large mount formed by art. Pococke
Herodium is identified with the present Jebel Fureidis, the description of Josephus agreeing with the existing ruins. The distance is 7 English miles from Jerusalem. Here Herod was buried. The place is mentioned, in 1483 a.d., by Felix Fabri as a garrison of the Franks, whence the modern Christian name - the Frank Mountain.
Claude Reignier Conder - The survey of western Palestine - 1883

The hill is laid out in terraces, the first rising about ten yards above the foot of the hill, above this the hill is very steep; and on one side there is a gentle ascent made by art. (..) The foot of the hill was encompassed with a wall. Pococke
Jebel Fureidis - The mountain is a truncated cone 400 feet high, 290 feet diameter at the top, with sides artificially scarped at an angle of about 35°. (..) The greater part of the cone is artificially constructed. Conder
The hill chosen by Herod the Great, King of Judea in 37-4 BC, to build his palace/fortress is a landmark for its unmistakable conic shape, similar to a volcano, which to some extent is man-made. It stands eight miles south of Jerusalem in the West Bank. 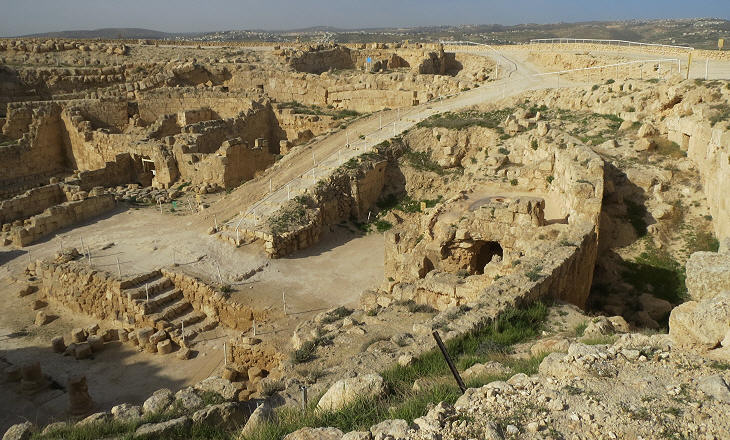 View of the "crater" at the top of the hill

These reasons greatly moved the Senate; at which juncture Antony came in, and told them that it was for their advantage in the Parthian war that Herod should be king; so they all gave their votes for it. And when the Senate was separated, Antony and Caesar (Octavian) went out, with Herod between them; while the consul and the rest of the magistrates went before them, in order to offer sacrifices, and to lay the decree in the Capitol. Antony also made a feast for Herod on the first day of his reign. Flavius Josephus
Herod owed his kingdom to the way he managed to be supported by the key Roman political leaders of his time. His early career was due to the patronage of Cassius, one of the leaders of the conspiracy against Caesar; he was made King of Judea mainly thanks to Antony and he retained his kingdom by becoming a close friend of Agrippa, Augustus' son-in-law.
There was a double circular fortification at the top, the inner wall was defended by one round tower, and three semicircular ones at equal distances, the first being to the east. Pococke
The top of the hill is surrounded by a circular wall, 5 feet thick. Inside this is a second of similar thickness, 18 feet from the first. Conder

Reconstructions of the palace/fortress (left) and of the mausoleum (right)

The inner wall has towers pointing (roughly speaking) to the four cardinal points. Those on the north, south, and west were semicircular and 38 feet interior diameter. That on the east is larger and higher, being circular, 60 feet exterior diameter, with a wall 6 feet thick. The foundations of these walls and towers are traceable throughout with little difficulty. Conder
The first excavations were carried out in 1962 and they gradually revealed the structure of the palace/fortress. It was protected by four round towers one of which had a greater size; the circular shape of the complex housed a rectangular courtyard which was in the shade almost all day, thus leading archaeologists to think that the palace was used as a summer residence. The model of the palace/fortress is very much based on the actual evidence of the ruins.
In May 2007 Professor Ehud Netzer reported the discovery of the base of a mausoleum. Its model is therefore hypothetical and is based on other ancient mausoleums such as the tombs in the Kidron Valley outside Jerusalem. 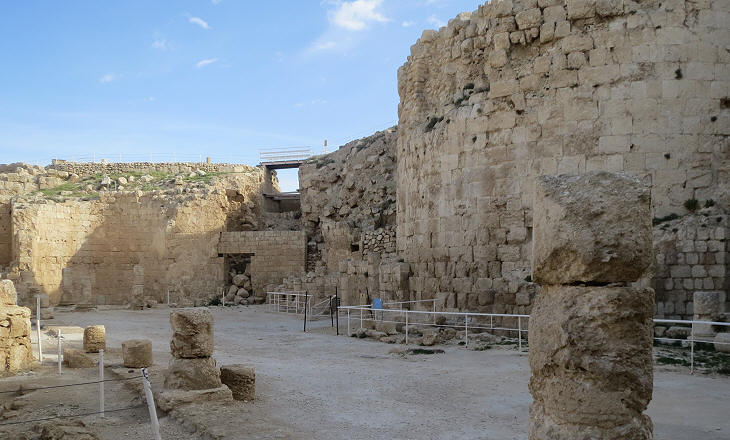 Courtyard of the palace

The interior of the fortress is considerably lower than the walls, and as far as could be ascertained without excavation, there was an interior esplanade 36 feet broad, supported on vaults. This agrees with the account given by Josephus that Herod increased the height of the hill artificially. Conder
The main building was structured around a long courtyard. Its columns were made up of limestone and then they were plastered and painted, similar to what can be noticed at Masada. The capitals were of the Corinthian order, but because the limestone is less workable than marble their decoration did not project much, as you can see in the image used as background for this page. 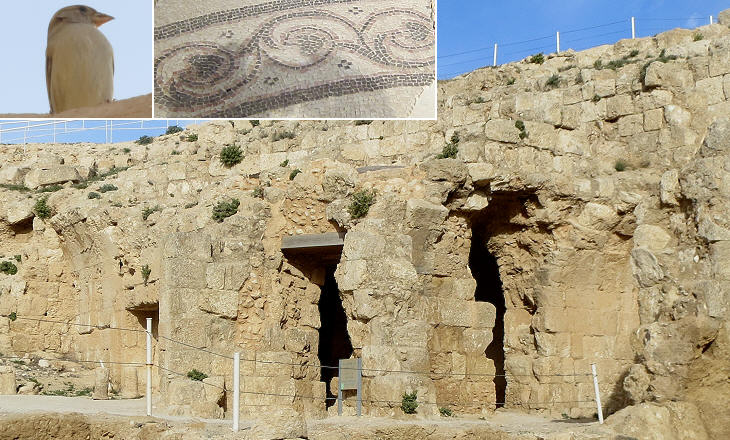 Baths; (insets) a current inhabitant of the main hall and a fragment of a mosaic

The work throughout is very well finished; the stones not of any great size. (..) The masonry of the fortress walls is well dressed. (..) Tesserae large and small were picked up. Conder
During his stay in Rome Herod was most likely the guest of Antony or of one of his wealthy friends. He therefore provided his residence at Herodion with some of the facilities he had seen in Rome. 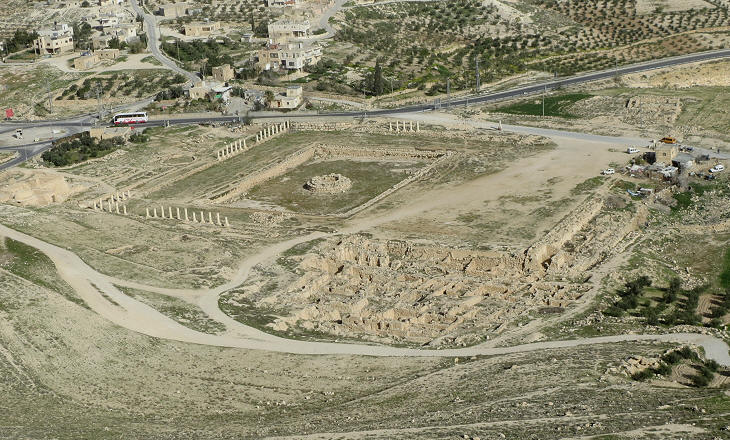 At the foot of the hill to the north there are great ruins of a church, and other buildings. On a hanging ground to the west of them there is a cistern, and the basin of a square pond, which appears to have had an island in the middle of it, and probably there was some building on it. These improvements were also encompassed with a double wall, and they say, that there are remains of two aqueducts to it. Pococke
The building at the foot of the hill is called by the natives Istabl ('Stables') and seems to answer to the lower palace mentioned by Josephus. It stands on a platform artificially levelled, and presents a series of very long narrow vaults, parallel to one another, with a cross vault at the east end. (..) North-west of these buildings are remains of a reservoir called Birketel Hummam, standing on a broad platform, (..) and in the middle is a round structure, perhaps originally a fountain, 30 feet diameter. A broad platform extends eastwards from the birkeh for 150 yards, and is supported by a wall running north and south. East of this platform, and north of the supposed lower palace, is a great sunk rectangular area, apparently a garden. Conder
In 1972 preliminary excavations at the base of the hill unearthed a lower town which included a very large courtyard surrounding a pool/reservoir having at its centre a sort of island, perhaps the site of a temple. Other buildings including baths were found in the following years.

The influence of Greece and of Rome penetrated into Palestine about the time of Christ. The great works of Herod at Caesarea, Samaria, Ascalon, Antipatris, Jerusalem, and Herodium, described by Josephus, were conceived in imitation of Roman art. Conder
King Herod the Great is not a popular hero in Israel. Apart from the many crimes he committed, including the killing of some of his sons, he is charged with having been a puppet in the hands of the Romans and an unenthusiastic supporter of Jewish traditions. In addition he belonged to an Edomit family, Idumea being a territory to the south of Judea whose inhabitants were not considered fully Jewish. 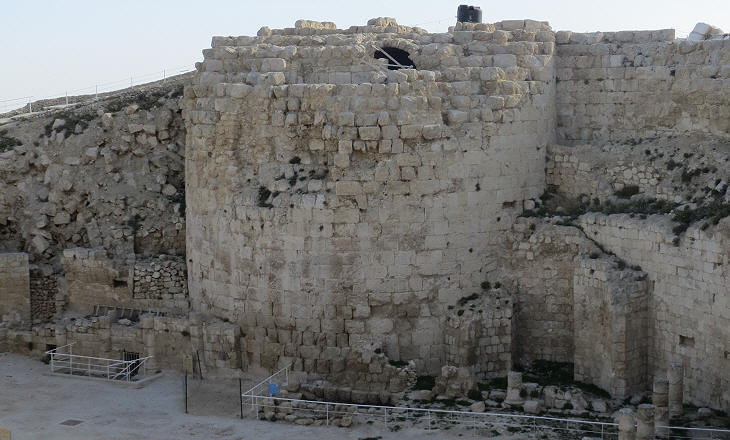 Main tower at the top of the hill

Herodion became a stronghold of the Zealots, the members of a sect who had a leading role in the First Jewish Revolt (66-73 AD). According to Josephus Flavius the defenders surrendered after the Romans captured by surprise one of their leaders and threatened to crucify him. Herodion was again occupied by the rebels during the Second Jewish Revolt (132-136) and some tunnels were recently found which were used for surprise sallies. The site was eventually abandoned for centuries. Evidence of small churches indicates that perhaps some monks lived there in the VIth century. 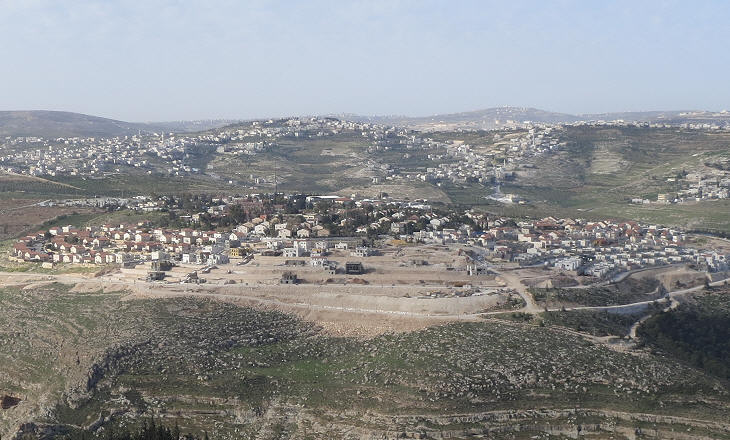 View from Herodion: an Israeli settlement (with tiled roofs) in the foreground and Arab villages in the background

The traditional account explaining the Jewish revolts makes reference to offences against the Jewish religion made by the Romans such as imposing the worship of the emperors, using pigs for sacrifices and banning circumcision. There were perhaps some other causes which gained the rebels the support of the population, such as the level of taxation, the behaviour of the local Roman officers and the privileges granted to non-Jewish ethnic groups.