He (Herod the Great, King of Judea in 37-4 BC) had gotten a great many of them (fortresses) already, and among them the strongest of them all, Masada.
Flavius Josephus - The Wars of the Jews - Chapter 12:1 - Translation by William Whiston
Josephus was the leader of the First Jewish Revolt in Galilee and in 67 AD he was captured by Roman general Vespasian who became emperor two years later. Josephus, who had prophesied the event, became an adviser to Titus, Vespasian's son, during the rest of the campaign. He was eventually freed and, consistent with Roman usage, he added the "surname" of his patrons (gens Flavia) to his name. He then wrote several books (in Greek) on the history of the Jews which were meant for a Roman audience, but nonetheless are the main source of information for historians on many events which occurred during the First Jewish Revolt and in the century which preceded it. 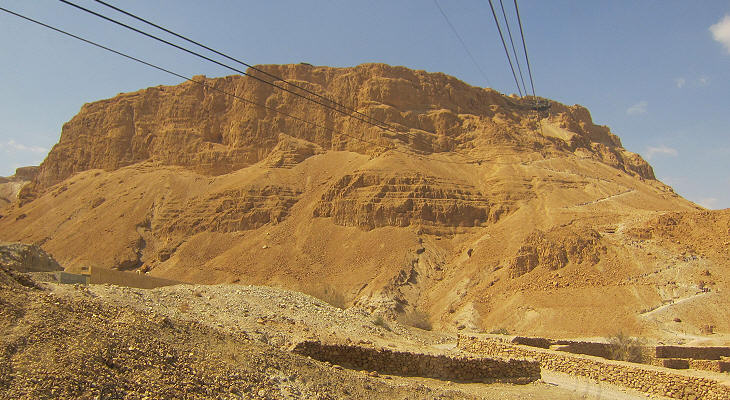 View from the Dead Sea side

Most likely the landscape surrounding the rock of Masada at Herod's time was not as rugged and barren as it is today and yet the fortress was regarded as impregnable because of its natural defences and because Herod built a wall round about the entire top of the hill, seven furlongs long; it was composed of white stone; its height was twelve, and its breadth eight cubits; there were also erected upon that wall thirty-eight towers, each of them fifty cubits high. Flavius Josephus 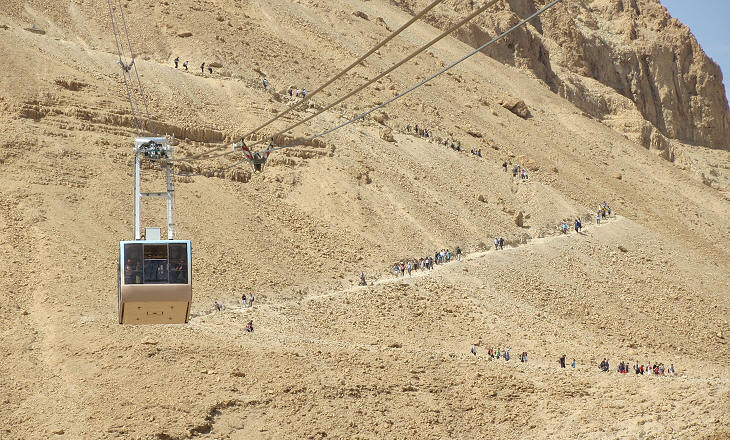 "The Snake Path", today the main access to the fortress (I took it in 1970, but age takes its toll!)

Masada was located at the south-eastern border of the Kingdom of Judea near Idumea (aka Edom), a region where Herod himself was born. Idumea was a sort of very small buffer state between Judea and the Nabatean Kingdom which controlled most of today's Jordan and Negev, a desert south of Judea. The Nabatean town of Mamfis in that desert was only thirty miles to the south-west of Masada. 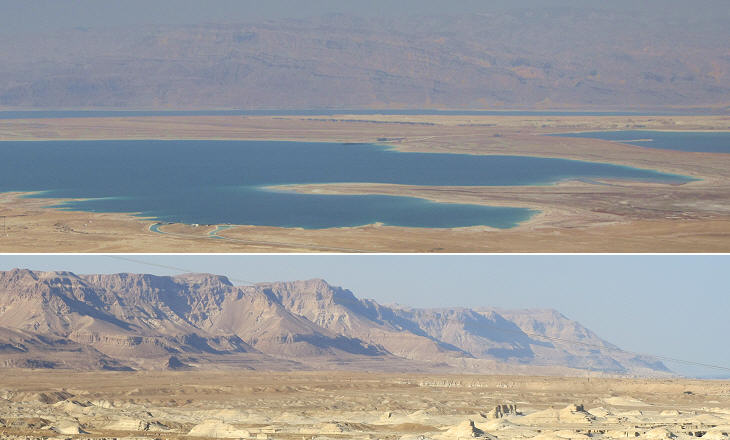 Views: (above) towards the Dead Sea and Jordan (you might wish to see some images of the Dead Sea from Jordan); (below) towards Ein Gedi

Today the level of the Dead Sea is dramatically lower than it was in 1970 (and in antiquity). The image above was taken in early March, when the sea level was relatively high.
Masada controlled a trade route along the western shore of the Dead Sea which was an alternative to the Nabatean one on the eastern shore. It was not the only Jewish settlement in the area. At Ein Gedi, fifteen miles to the north, archaeologists have found evidence of a small town with a decorated synagogue. 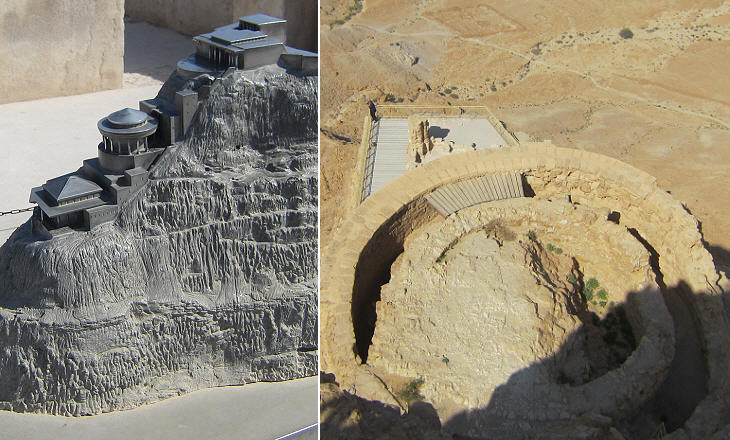 Northern palace: (left) model; (right) view of the lower and middle terraces from the upper one

As reported by Suetonius, Emperor Augustus claimed: I found Rome a city of bricks and left it a city of marble. Herod owed his kingdom to the protection of Rome and chiefly of Augustus. He tried to imitate him by founding new towns (e.g. Caesarea), by completing/redesigning the Temple at Jerusalem, by building a palace/fortress at Herodion and by providing Masada with two luxury residential palaces in addition to the fortifications quoted by Flavius Josephus. 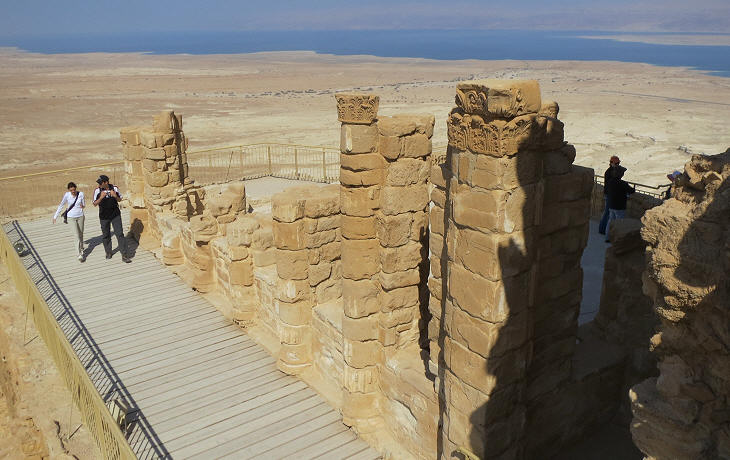 The northern palace is a relatively small complex, but the engineers and workers who built it deserve admiration for the three terraces they built at the northern edge of the hill. They are in part cut into the rock and in part supported by walls. 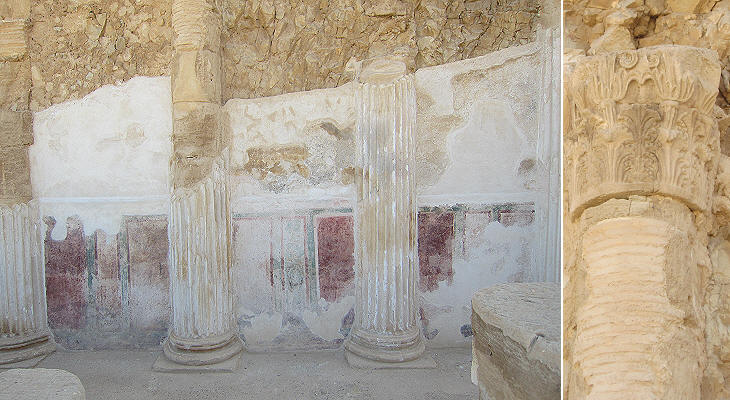 The furniture also of the edifices, and of the cloisters, and of the baths, was of great variety, and very costly; and these buildings were supported by pillars of single stones on every side; the walls and also the floors of the edifices were paved with stones of several colours. Flavius Josephus
As a matter of fact walls and columns were made of local limestone and then plastered and painted to resemble coloured marbles. 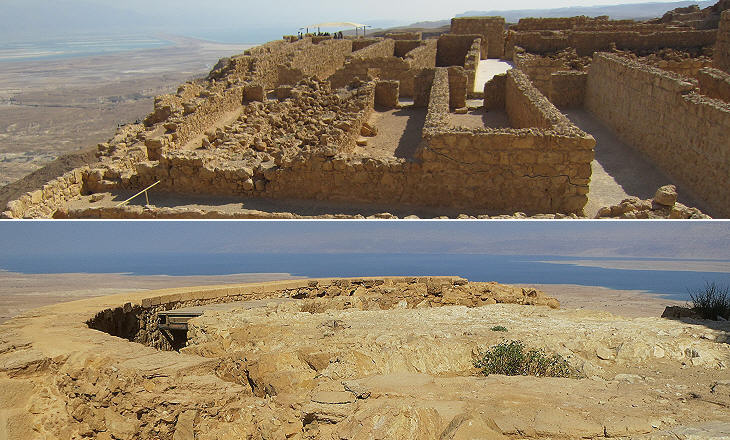 Lesser edifices were built on the inside, round the entire wall; for the king reserved the top of the hill, which was of a fat soil, and better mould than any valley for agriculture, that (those who) committed themselves to this fortress for their preservation might not even there be quite destitute of food, in case they should ever be in want of it from abroad. Flavius Josephus
Today it is hard to believe that farming could occur inside the fortress and yet Flavius Josephus is very precise about it. 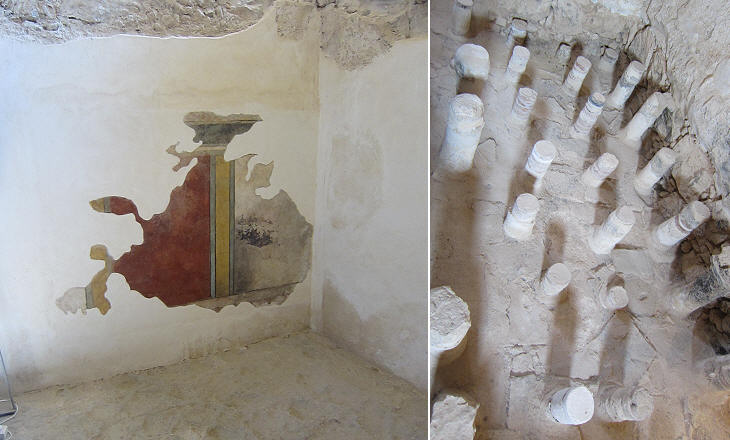 Northern palace: baths: (left) one of the halls; (right) evidence of the hypocaust, the Roman system of underfloor heating

In 19 BC Marcus Vipsanius Agrippa, son-in-law of Emperor Augustus, was appointed governor of Syria and given special powers over the whole of the Roman territories in the Levant. It is known that he visited or was expected to visit Judea and King Herod wanted to offer him hospitality adequate to his rank. During his stay in Rome in 37 BC he had seen that wealthy families had private baths (such as those at Villa di Livia, Augustus' third wife) and he provided his residences with similar facilities which perhaps were built by Roman engineers. The image used as background for this page shows a black and white mosaic found at these baths. 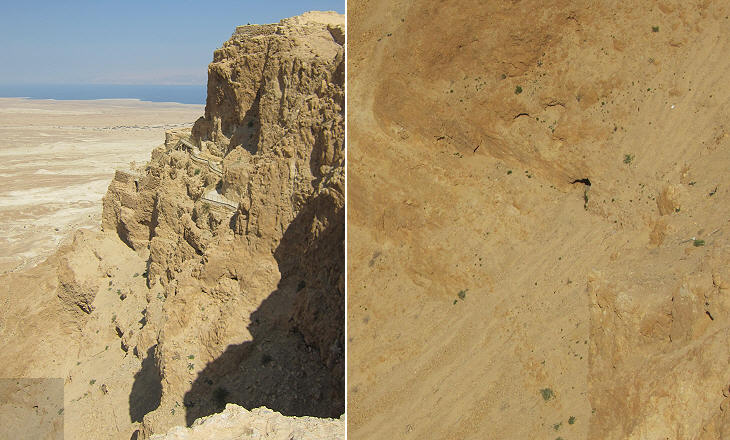 Archaeologists have identified several cisterns at Masada; the large ones were probably used to store rainwater, but those of the northern palace were replenished by a complex supply system. A net of canals/small aqueducts conveyed water to a conduit excavated in the rock at the foot of the hill which was accessible by a trail or steps from the northern palace. Today this seems quite impossible, but perhaps at the time of Herod the cliff was not as precipitous as it is today. 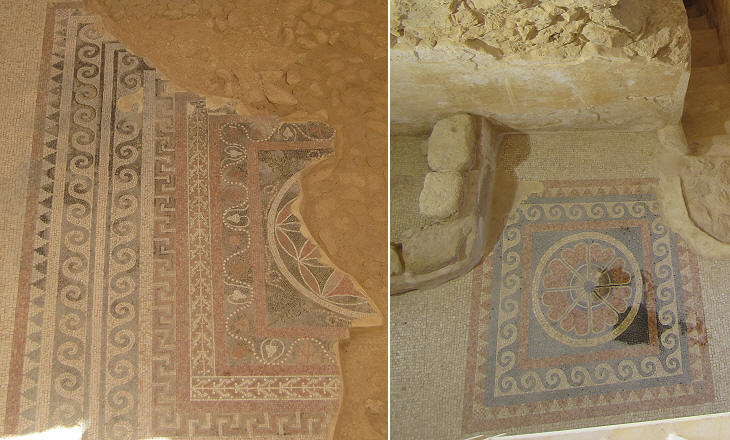 A second palace was built in the southern part of the fortress; it did not enjoy the commanding view of the northern one, but it was larger in size and more comfortable to live in. It retains some small elaborate mosaics which perhaps were made after the death of Herod. 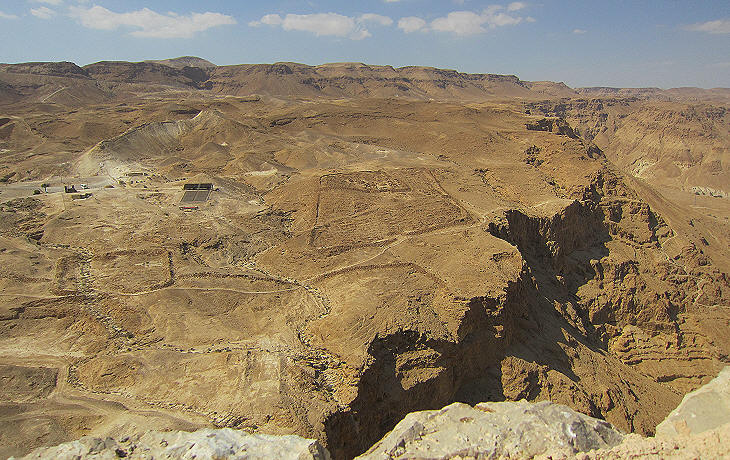 The crowds who visit Masada do not come because of the remains of Herod's palaces, but because the fortress was the site of the last resistance of the rebels in 73 AD.
In particular the tragic epilogue of the Roman siege is a symbol of Jewish national identity and heroism.
In the morning (the Romans) put on their armour, and laid bridges of planks upon their ladders from their banks, to make an assault upon the fortress, which they did; but saw nobody as an enemy, but a terrible solitude on every side, with a fire within the place, as well as a perfect silence. So they were at a loss to guess at what had happened. At length they made a shout, as if it had been at a blow given by the battering ram, to try whether they could bring any one out that was within; the women heard this noise, and came out of their under-ground cavern, and informed the Romans what had been done, as it was done; and the second of them clearly described all both what was said and what was done, and this manner of it; yet did they not easily give their attention to such a desperate undertaking, and did not believe it could be as they said; they also attempted to put the fire out, and quickly cutting themselves a way through it, they came within the palace, and so met with the multitude of the slain, but could take no pleasure in the fact, though it were done to their enemies. Nor could they do other than wonder at the courage of their resolution, and the immovable contempt of death which so great a number of them had shown, when they went through with such an action as that was.
Flavius Josephus 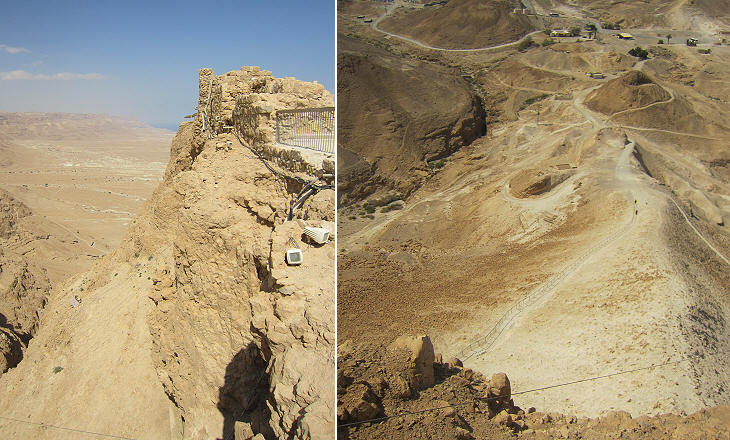 The Roman commander Silva had now built a wall on the outside, round about this whole place, as we have said already, and had thereby made a most accurate provision to prevent any one of the besieged running away, he undertook the siege itself. (..) There was also a tower made of the height of sixty cubits, and all over plated with iron, out of which the Romans threw darts and stones from the engines, and soon made those that fought from the walls of the place to retire, and would not let them lift up their heads above the works. At the same time Silva ordered that great battering ram which he had made to be brought thither, and to be set against the wall, and to make frequent batteries against it, which with some difficulty broke down a part of the wall, and quite overthrew it. Flavius Josephus
The seizure of Masada was largely due to the engineering skills of the Romans. 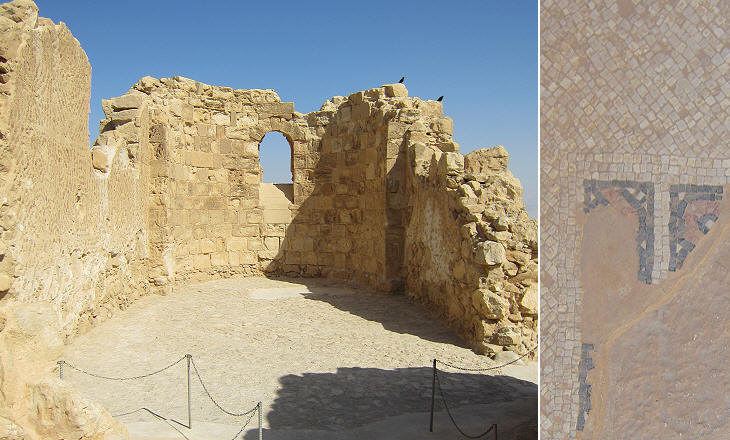 Ubi solitudinem faciunt, pacem appellant. Where they (the Romans) make a desert, they call it peace.
Tacitus - Agricola.
After Emperor Hadrian quelled the Second Jewish Revolt (132-36), Judea was almost depopulated. Religious Jewish centres flourished in Galilee, but Jews were not allowed to return to Jerusalem. In the Vth or VIth century some monks built a church in Masada, but after the Arab invasion of the VIIth century the site was visited only by goats. 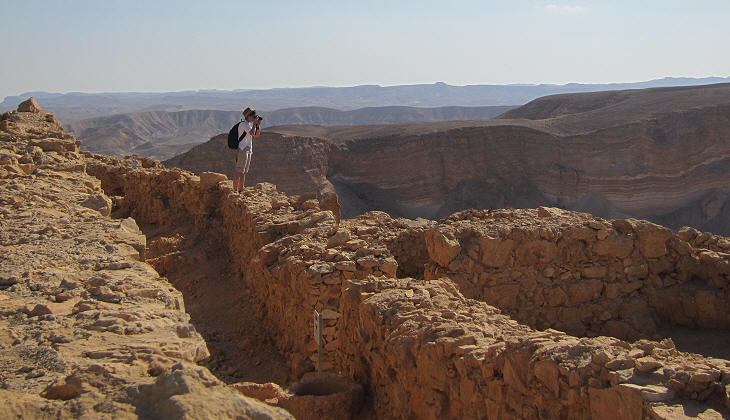