Larnaca is a port situated on the south-eastern coast of Cyprus. It acquired importance in the XVth century when it became an alternative to Famagusta, because the latter was in Genoese hands. According to tradition Larnaca derives its name from a Greek word meaning terracotta coffin because the territory surrounding the town was full of tombs of ancient Kition. 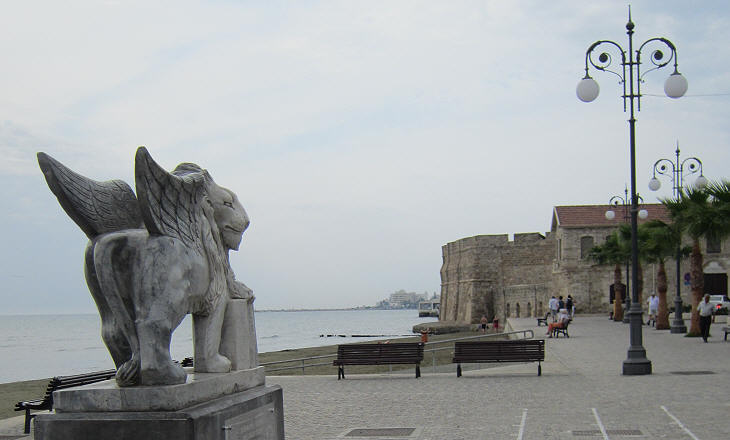 During the Venetian occupation of Cyprus Larnaca was important for its salt works: This port (..) is near a very extensive lake, or rather a cluster of lakes, where an immense quantity of salt was annually made, before and after the Venetians were in possession of the island. So sensible were they of the value of this commodity that notwithstanding the vast extent of the lake, they or their predecessors surrounded it with a stone or mud wall, the remains of which are still to be seen in some few places. And well they might bestow such pains upon it; for according to accounts of the best authority, it yielded 1,000,000 Piastres, amounting to about £ 125,000 per annum; whereas now it is farmed at the yearly rental of 1,600 P. or about £ 200.
Alexander Drummond, Esquire, His Majesty's Consul at Aleppo, published in London, in folio, in 1754, under the title of Travel through different cities of Germany, Italy, Greece and several parts of Asia, a series of familiar letters addressed to his brother and other friends. He started from London May 11, 1744, and reached Larnaca March 6, 1745.
Claude Delaval Cobham - Excerpta Cypria - 1908 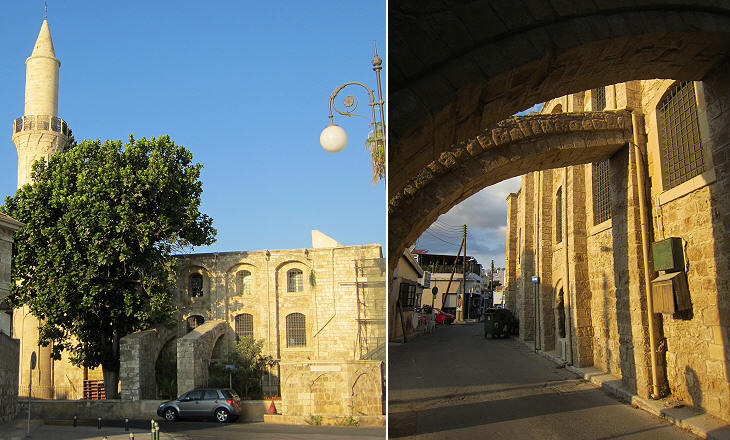 According to Giovanni Filippo Mariti, an Italian who travelled extensively in the Levant in 1760-1768, at Larnaca there was a church of the Holy Cross, with many marble columns, and outside a Venetian lion standing on a column of granite. This until the 1570 Ottoman occupation of the town when it was modified and turned into a mosque (and still is). 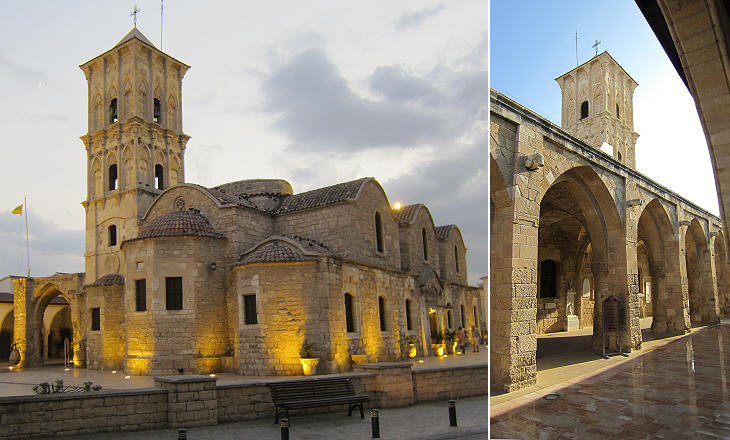 There too is a small church dedicated to S. Lazarus. The saint's tomb is shown underground, but the sepulchre itself has been long since broken up by visitors who wished to carry away some relic. The monks on the spot say that after S. Lazarus was delivered from the hands of the Jews he came to Cyprus, where he was made a bishop by the apostles who came there later, and that after the zealous labours of thirty years, he died and was buried here, but that his body was transported later to Constantinople and then to Marseille, where it is said still to rest.
In 1683 Cornelis de Bruijn, a Dutch painter and traveller best known for his views of Persepolis, visited Cyprus and described it in A Voyage to the Levant.
Agios Lazarus was largely modified in the XVIIIth century and provided with an imposing bell tower. 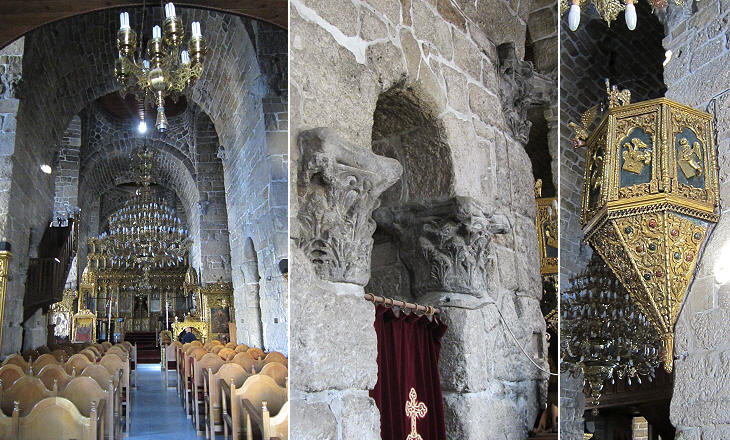 Agios Lazarus: details of the interior including some ancient capitals

According to Pietro della Valle, a Roman noble who visited Cyprus in 1625, originally the church belonged to the Armenians. During the XIVth century there were close links between the Kingdom of Cyprus and the Kingdom of Lesser Armenia. You may wish to see an Armenian church at Famagusta. 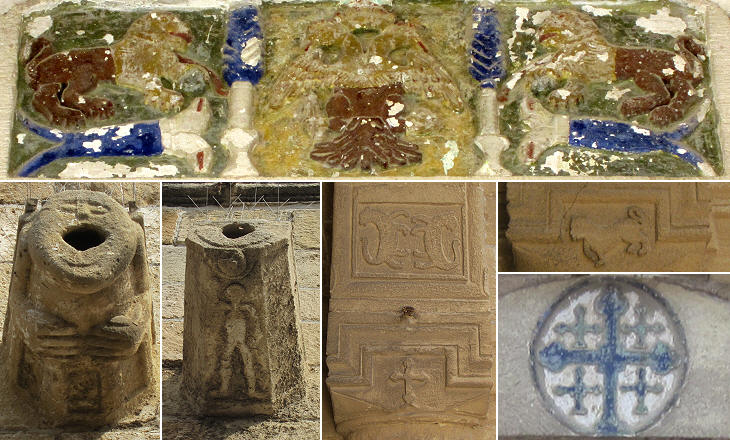 Agios Lazarus: a series of medieval details including (lower right corner) the Cross of the Holy Sepulchre or of the Kingdom of Jerusalem

Notwithstanding the changes made in the XVIIIth century the church retains some medieval gargoyles and reliefs. The lions could be a reference to the Lusignans, who ruled Cyprus between 1192 and 1489, whose heraldic symbol was a rampant lion. 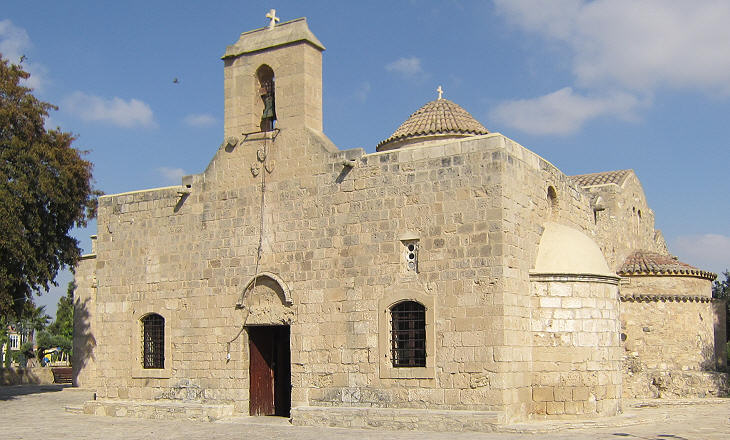 This small Byzantine church near the village of Kimi, south-west of Larnaca, could be called "Our Lady of Loreto of Cyprus" because according to tradition it was built by angels. The church was modified in the late XIXth century when a small bell tower was added. 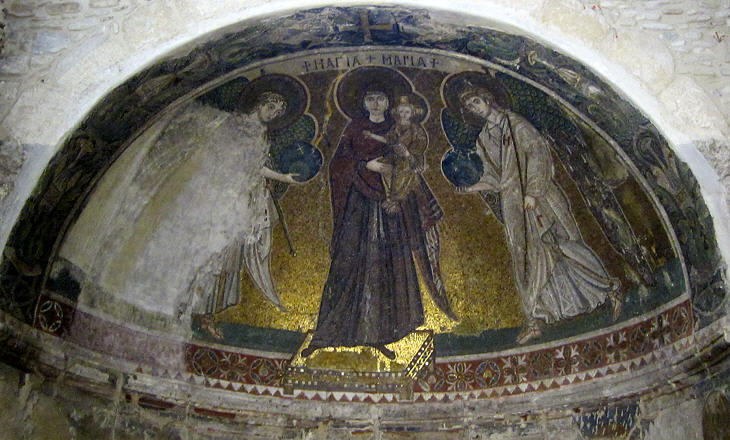 Panagia Angeloktisti: mosaic of the apse

The church was built in the XIth century, but it includes parts of an earlier basilica. The apse of the latter houses a mosaic representing life-size figures of the Madonna and Child standing with an angel on either side holding a globe. The angels have unusual peacock feather wings. It is dated VIth century and it is the finest Byzantine mosaic of Cyprus. The interior is decorated with a few frescoes, one of which can be seen in the image used as background for this page. 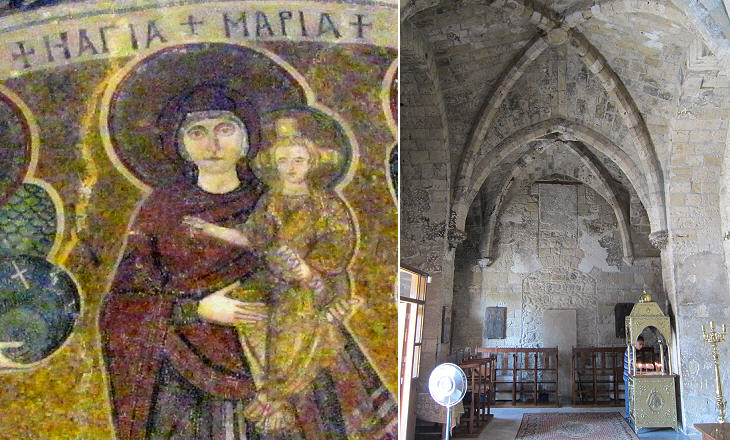 Hagia Maria (St. Mary) is not the official Greek Orthodox name of Mary who was declared Theotokos (God-bearer) at the 431 Council of Ephesus. In Byzantine paintings she is usually indicated by the letters MPOY meaning Mother of God (see a mosaic at Hagia Sophia in Constantinople). For this reason art historians believe the church belonged to a Christian community, such as the Nestorian one, which did not accept the outcome of the council.
In the XIVth century a chapel for the Latin rite was added on the southern side of the church by the Gibelet family. 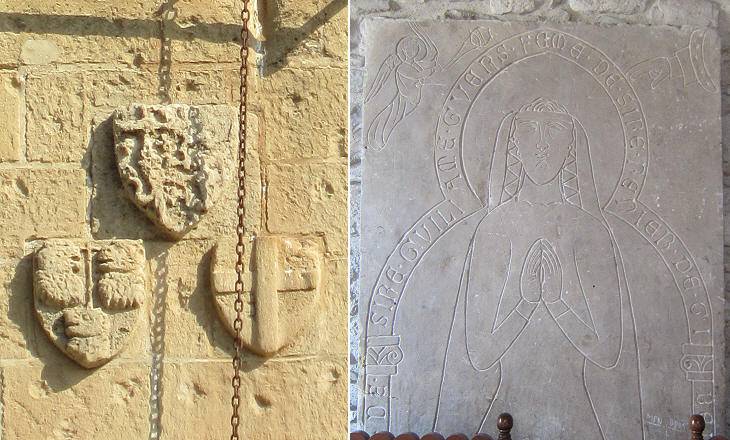 Panagia Angeloktisti: (left) coats of arms of the Gibelet family (left), of the Kingdom of Cyprus (centre) and of a Christian order (right); (right) gravestone of Simone Guers, wife of Renier de Gibelet who died in 1302. The inscription is in French

The Gibelet were actually the Embriaco, a family of Genoese origin who ruled the town of Giblet (today's Byblos in southern Lebanon) for two centuries. They moved to Cyprus after they lost their fiefdom and became known as Gibelet. They became one of the most prominent families of the island. 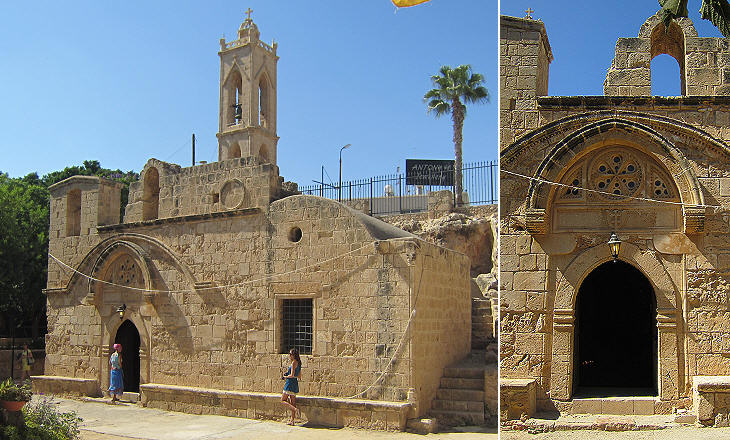 Agianappa, or S. Nappa, is near Cape della Greca: there is nothing to see but a church made in a grotto, and dedicated to the Virgin Mary. (Van Brujn)
This convent is remarkable for having a large church cut out of a grotto in the rock but as I have seen several of these grotto churches and it was two hours out of my road I did not turn off to visit it.
William Turner - Journal of a Tour in the Levant - 1815.
The monastery was located in a remote area at the south-eastern tip of the island and not many travellers ventured to visit it. Today the walls which protected it from pirates are a defence against the noise of the surrounding sea resort named after the monastery and which is known for "clubbing" (gathering socially at nightclubs). 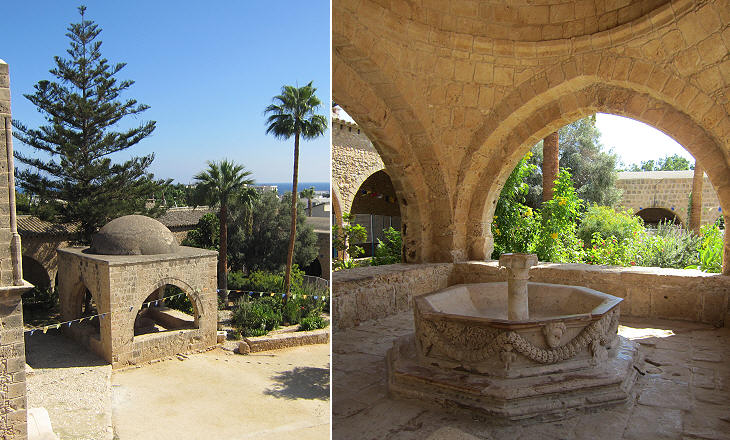 Sancta Nappa is much admired by the people of the country, though for what I do not know: the convent is rendered agreeable within, by a fountain of water, round which the people can sit and solace themselves under a large cupola; but there is nothing beautiful in or about the place. Here I found a Latin inscription on a marble stone: by which it plainly appears to have been a Roman convent: and I found a place called the Latin chapel, under the same roof with the Greek church, part of which is dug out of a rock. Drummond 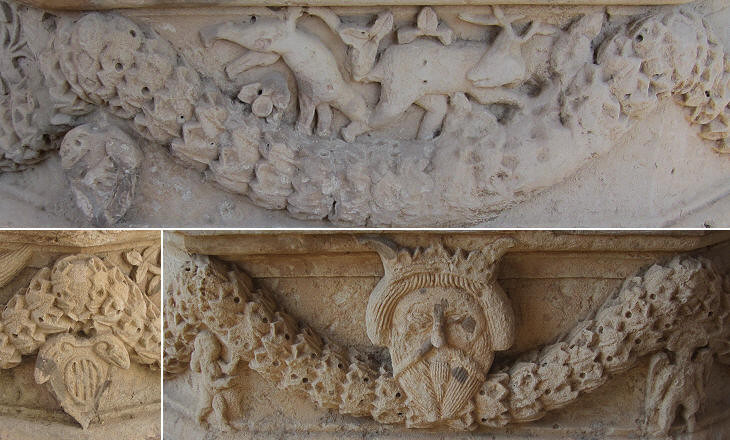 Agia Napa monastery: details of the well: (above) perhaps The Myth of Actaeon, a hunter who was turned into a stag by Artemis and torn apart by his own hounds; (below) medieval additions

According to tradition the well was built in the XVIth century; its decoration is made up of ancient reliefs which were modified by adding coats of arms and heads of kings. In the late XIXth century the remains of a Roman/medieval aqueduct were found near the monastery. 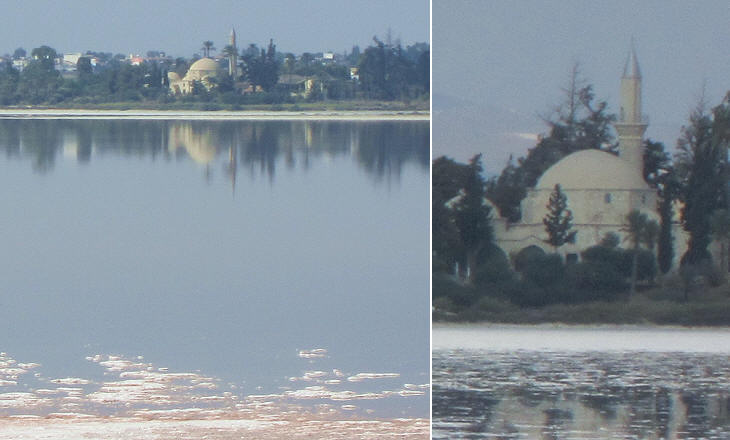 The mosques built by the Ottomans at Larnaca are of limited interest including the XIXth century complex near the salt works (which were closed in 1986). Visitors of the past were told different stories about the shrine it houses.
Near the Salines is a mosque which the Turks state to be the grave of Mina, mother of their prophet Mahomet. The sepulchre is enclosed by three huge stones, two of them upright, and the third resting on them above. The first two are thirteen palms broad, and at least as high again. But the stone is covered with lime, and can no longer be seen. Van Brujn
A little further than this salt lake is a mosque called Hala Sultan Tekiye, whither the Moslem repair with great devotion, to offer up their prayers at the grave of Mohammad's grandmother, who, they believe, is here interred: though in what manner the good old lady was transported hither from Arabia, I have not yet been able to learn. Drummond
On the other side (of the salted lake) stands the sepulchre of a certain canonized Turkish princess, to which the Mahometans perform pilgrimages. John Heyman, a Dutch traveller in 1759.
To the west of these lakes there is a small Turkish convent, in which there is only one Dervish; they have a sepulchre there, which is held in great veneration by the Mahometans, it being, as they say, the place where the foster sister of Fatimah, the sister of Mahomet was buried. Richard Pococke, an English traveller in 1738.
The shrine is dedicated to Umm Haram (Turkish: Lala Sultan), the wife of an Arab commander who accompanied her husband on an expedition on Cyprus in 649. According to tradition Umm Haram was an aunt or close friend of the Prophet. Umm Haram fell from the donkey she was riding and died on the spot. 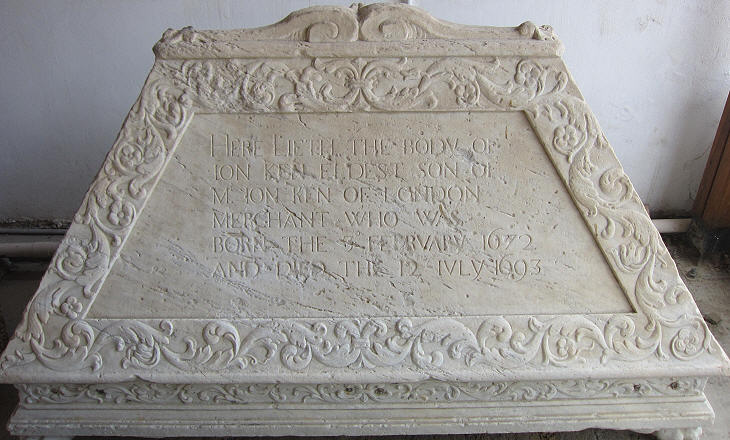 The English burying-ground where are interred many Englishmen, some of whom have handsome tombstones over them, dated the beginning of the last century when the English factory here consisted of fifteen or sixteen houses. The burying-ground is now however falling to decay as the Greeks also are interred there and many masons have been working on the tombs by which they have quite effaced the inscriptions of the flat ones. Turner 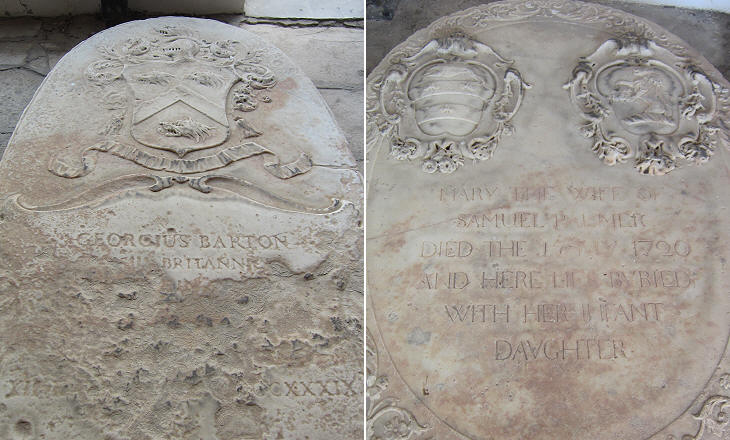 The English consul's house here is the best on the whole island, though the outside of it is only of clay, but nothing can be more neat, or elegantly ornamented than the inside. It has also the largest hall I saw in any part of the Levant; but, what is of much more importance, the English consul is highly respected all over the island, as jointly with his company he advances money to the inhabitants, for getting in their several harvests, in which otherwise they would be at a great loss.
In this both parties find their advantage, for the English do not advance their money under twenty per cent, and receive the interest in silk, wine, cotton, corn and other products of the country, on all which they set their own price; whence, without wronging those gentlemen, it may be supposed that thirty per cent, is the least they make of their money, and on failure of payment at the time appointed, they may immediately seize on the debtor's effects. Heyman

Move to other pages of this section:
Famagusta - The Walls
Famagusta - Main Churches
Famagusta - Other Monuments
Nicosia - Walls and Houses
Nicosia - Churches and Mosques
Cirenes (Kyrenia)
An Excursion to Bellapais
or see some castles of the Crusaders in the southern part of Cyprus.