- Fortresses on Cyprus
(Castle of Marqab)

You may wish to see an introductory page with a map first. The main ancient and medieval towns of Cyprus are covered in other sections.

(November 1738) We came to two delightful villages which are contiguous; they are called Episcopi and Colossé. These villages are finely watered, and most beautifully improved with mulberry trees for the silk worms, and also with a great number of orange and lemmon gardens. At the south end of Colossé there is an antient preceptory of the knights of St. John of Jerusalem, which is now in ruins; there are likewise the remains of a very high aqueduct that conveyed water to it, and I saw an epitaph of one of the priors of this place, who died in one thousand four hundred and fifty three. It is the opinion of some that the antient city of Curium was here, but I could not see the least sign of any ruins.
Richard Pococke - A Description of the East and Some Other Countries - 1745
At Colos are some ruins of the age it is said of the French kings of Cyprus and there is one large square tower built it is reported by our "Coeur de Lion". (King Richard I the Lionheart)
William Turner - Journal of a Tour in the Levant - 1815 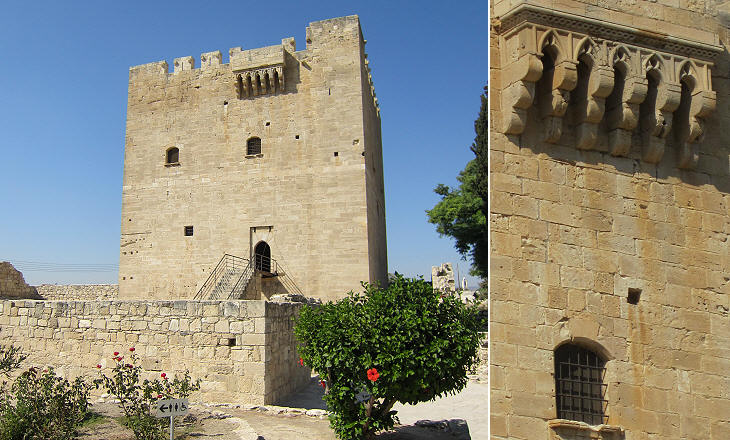 (left) The tower; (right) machicolations (openings from which stones or burning objects were dropped on attackers)

By the end of the XIIIth century the Knights Hospitallers were ousted from all their bases in the Holy Land and in other Crusader States and took refuge on Cyprus. King Henry II assigned them some fiefdoms, but he welcomed their decision to leave the island and to move to Rhodes, which they conquered in 1306-1308.
The Knights retained a Commanderia (i.e. a fiefdom) in the southern part of the island, between the port of Limassol and the ruins of ancient Kourion. The revenue of the fiefdom helped the Order in achieving its objectives and the Commanderia of Cyprus was very well managed.
The Knights built a large tower at the centre of an enclosure which included a sugar cane factory and cellars. The tower, albeit smaller, resembles that of Safita in Syria. 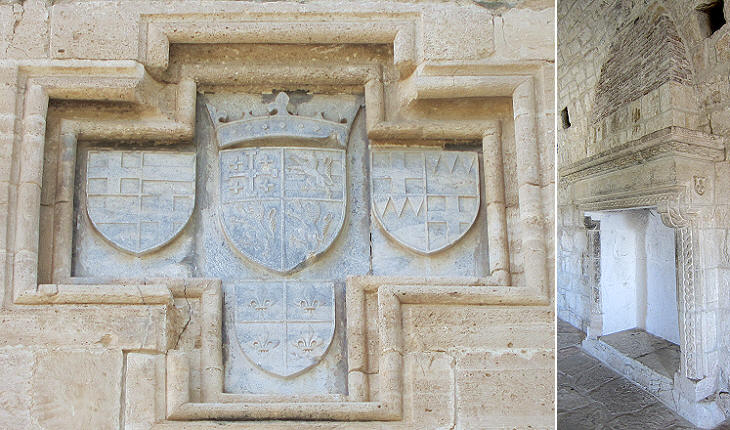 (left) Coats of arms of the Kingdom of Cyprus (centre), of Grand Masters Jean de Lastic (1437-1454) (left) and Jacques de Milly (1454-1461) (right) and of Louis de Magnac (below), commander of Kolossi; (right) mantelpiece with the heraldic symbol of de Magnac. A detail of the mantelpiece decoration can be seen in the image used as background for this page. This "plait" motif is typical of many buildings on Rhodes and in particular at Lindos. You may wish to see a catalogue of the coats of arms of the Grand Masters at Rhodes

From hence the country is open and pleasant to Colos, which is a fine village, where there was formerly a commanderie of the Knights Hospitallers. Lewis de Magnac, grand commander in Cyprus, built, in this place, a plain, square, and strong tower, which still remains; the front exhibiting this appearance. It is about seventy feet high, and fifty-four feet broad, adorned with coats of arms; but the great gate is buried in some vile house, so that I could not see it: yet part of the convent, which has been large, is still to be seen.
Alexander Drummond, Esquire, His Majesty's Consul at Aleppo, published in London, in folio, in 1754, under the title of Travel through different cities of Germany, Italy, Greece and several parts of Asia, a series of familiar letters addressed to his brother and other friends. He started from London May 11, 1744, and reached Larnaca March 6, 1745.
Claude Delaval Cobham - Excerpta Cypria - 1908 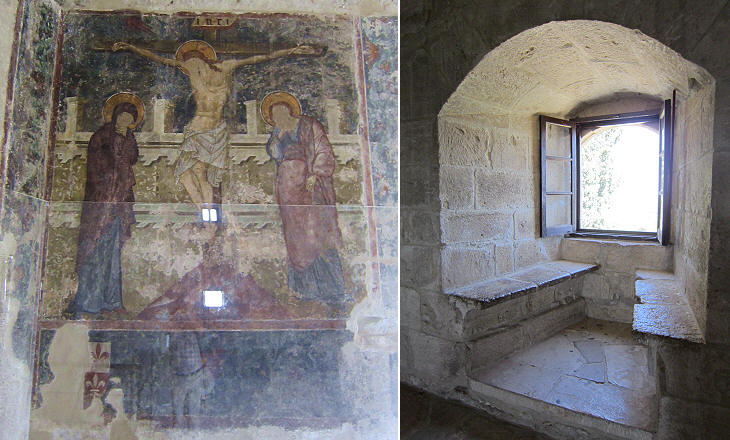 (left) Fresco in the main hall; (right) window and benches

Constantius, Greek Orthodox Archbishop of Sinai, visited Cyprus in the late XVIIIth century and so described the wines of Commanderia (which still enjoy a good reputation):
One product of the island has been up to this time fostered with great zeal and care, and is still one of the chief articles of export  but even this, like the rest, has felt the presence of tyranny  this is its delicious wine. This fragrant nectar of Zeus, expressed and flowing from the vines which abound in this shrine of his beloved son Bacchus, is drawn from a part of the island called Comanderia, for here was the lot and inheritance of the Comandery, the order of the Templars and Knights of Malta, which lies between Mount Olympus and the towns of Lemesos and Paphos. This excellent wine is one of the things greatly in request in Europe. Delaval Cobham 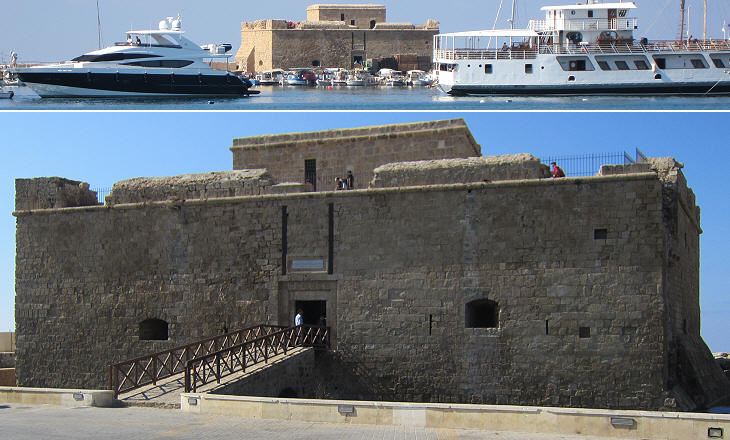 Views of the Ottoman fortress

I arrived at Baffa, which is situated near the place where new Paphos stood. (..) The town of Baffa, where the governor resides, is inhabited only by a few Christians, and by a small garrison in a castle at the port. (..) There is an aga and some janizaries who live at the castle. Pococke
The bay is large but the port very unsafe as the mole remains only in part to the east and west and not at all to the south which is thus left quite open. To this port, bad as it is, vessels frequently resort for the advantage of smuggling corn. There were two small Idriote (of Hydra, a Greek island near Aegina) vessels anchored in it while we were there. The port is commanded by an insignificant castle built on its banks by the Turks. Turner
The small fortress built by the Kings of Cyprus or perhaps before them by the Byzantine rulers of the island was dismantled by the Venetians before the 1570 Ottoman invasion, as they preferred to concentrate on the defence of Nicosia, Famagusta and Cirenes which were better protected. The fortress was rebuilt by the Ottomans. 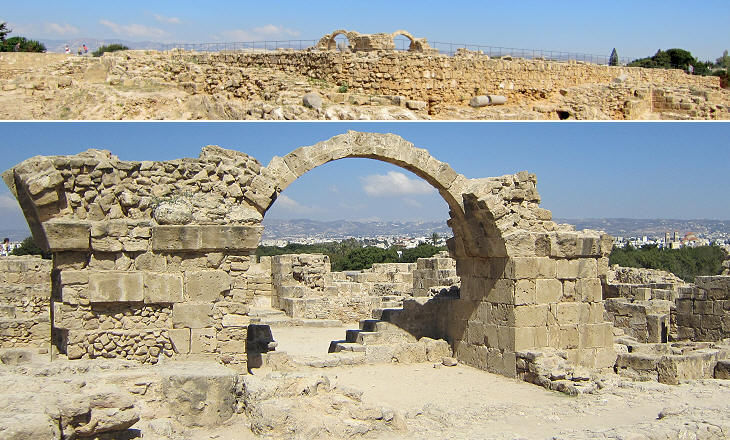 A larger fortress was built by the Kings of Cyprus by utilizing materials of ancient Paphos. The ruins of the fortress are known as Saranda Kolones (Forty Columns) for the many granite columns which are scattered around the place. They made William Turner believe he had found a Temple to Venus. 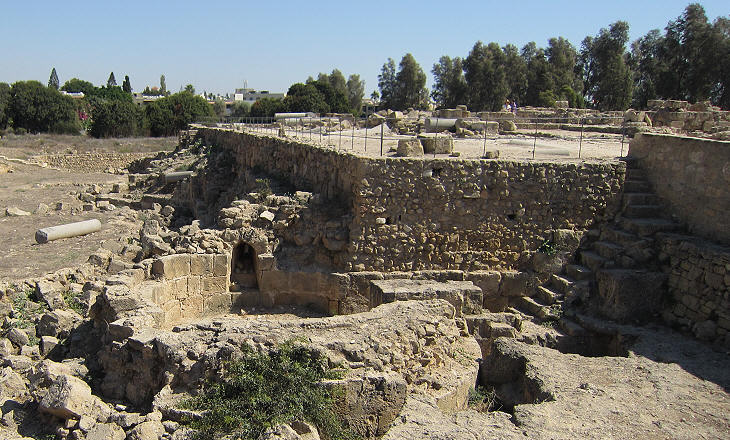 Recent excavations have highlighted the presence of a square fortress having a round tower at each corner. It was surrounded by a moat and was accessed via a drawbridge. An earthquake which struck the region in 1223 presumably caused extensive damage to the fortress, which was not rebuilt because the port of Paphos did not warrant an additional fortress. 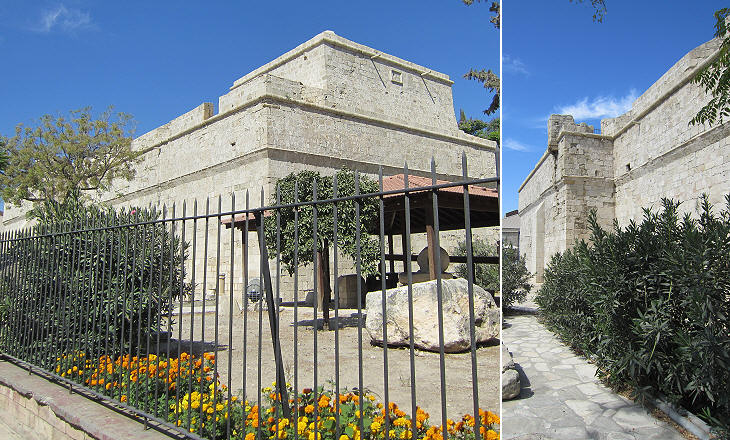 Limesol, where we landed, is a small town, built of unburnt brick; there are a great number of mulberry gardens about it, with houses in them, which makes the place appear very beautiful at a distance; the country also abounds in vineyards, and the rich Cyprus wine is made only about this place; the ordinary wine of the country being exceedingly bad. It is one of the cheapest places in the island, which is the reason why ships bound to Egypt, and other parts put in here to victual. (..) They have built a castle and platform here, to defend themselves against the Maltese. Pococke
At half past eight we entered Limesole. It is a miserable town consisting of 150 mud houses of which 100 are Greeks and 50 Turks. Yet of the fifty ship loads of wine which Cyprus exports annually twenty are on an average despatched from Limesole. Turner
Today Limassol (or Lemesos) is a booming sea resort with a periphery which has incorporated the ruins of ancient Amathous. The old harbour has been largely modified to make room for modern buildings and the fortress which protected it is now surrounded by them. Similar to that of Paphos it was dismantled by the Venetians and rebuilt by the Ottomans. 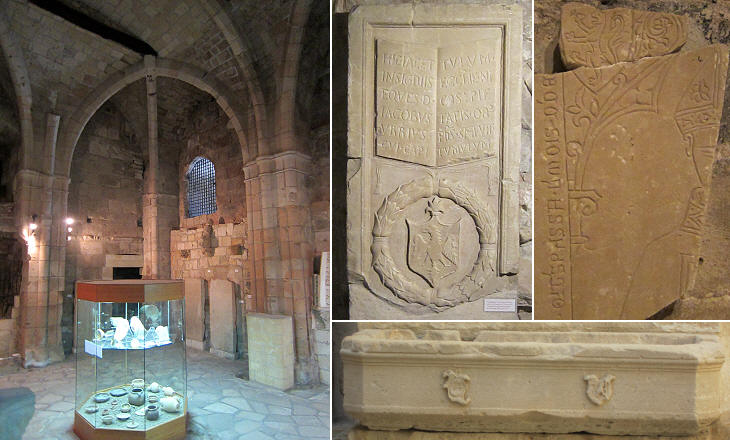 The underground hall retains the structure it had at the time of the Kingdom of Cyprus. Today the whole building houses a museum with several exhibits from lost churches. The town is of particular interest to English historians because King Richard I landed here when he started the conquest of the island and because at the end of his campaign he returned to Limassol to marry Berengaria of Navarra. 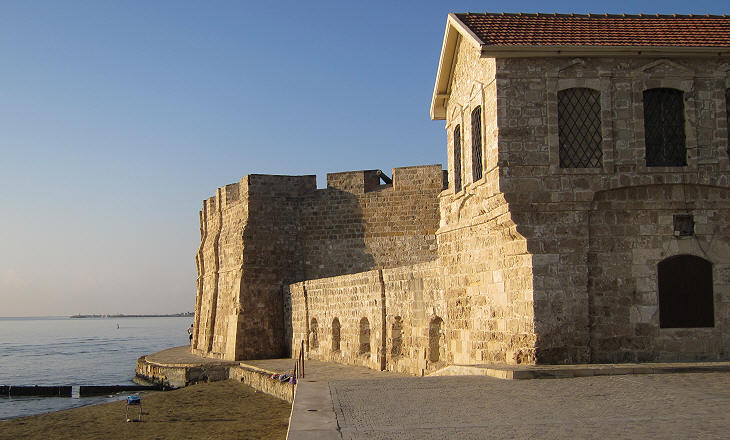 Larnica is situated a small mile from the sea: At the port which belongs to it there is a little town called the Marine; the harbour is naturally well sheltered, but the ships lie off at some distance, and the boats come ashoar on an open beach, and are drawn up to land. Pococke
Larnaca was the port from which the Venetians shipped the salt which was made at a nearby coastal lake. The large plain which surrounds the town was chosen by the Ottomans to land their army in 1570. The landing was unopposed by the Venetians who chose to retrench themselves in the main towns. The small fortress which protected the harbour was modified by the Ottomans.