The County of Tripoli was the last Crusader State to be established and in a way it never grew out of its minor status, as the first Counts of Tripoli were vassals of the Kings of Jerusalem and later on the County fell under the influence of the Principality of Antioch. 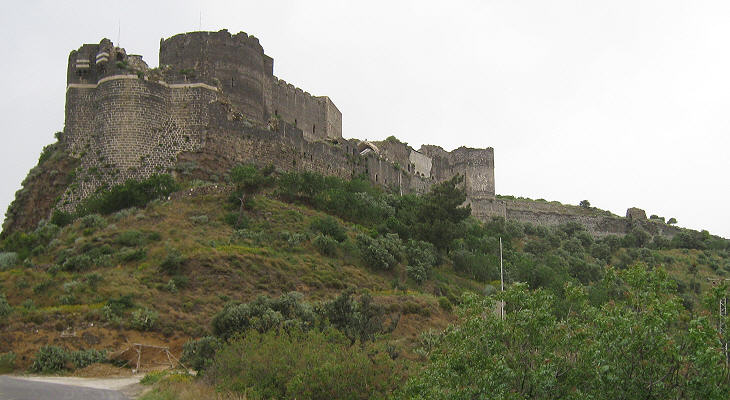 The castle of Marqab was located very near the coast and the border with the Principality of Antioch. It was initially built by vassals of the Count of Tripoli, but in 1186 it was assigned to the Knights Hospitallers who already controlled Krak des Chevaliers, another fortress at the eastern border of the country. The two castles could exchange messages by smoke or mirrors via Chastel-Blanc (Safita), a smaller castle which was located in-between, which however was held by the Knights Templars, another Christian military order.
The Order of the Knights Hospitallers still exists today with the name of Sovereign Military Order of Malta (see some pages on Rhodes which was ruled for two centuries by the knights, on Malta and on the Priory of the Order in Rome). 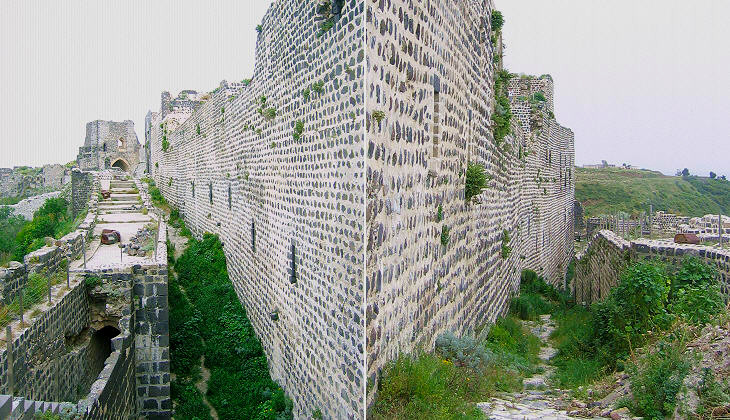 Views of the double curtain of walls

They told me that the governors of these countries took up their residence at the castle of Merkab, to which we went by a steep ascent of an hour and a half. The castle is about half a mile in circumference, taking the whole summit of this mountain; it is of a triangular figure, and exceedingly strong, the inner walls are fifteen feet thick, and there is another wall on the outside, which encompasses it almost all round; for in one part, where its natural situation is very strong, there is only a single wall.
Richard Pococke - A Description of the East and Some Other Countries - 1745
The defensive layout of Marqab was rather simple; the castle had a triangular shape: one side was protected by a deep ravine; the other two were fortified with a double curtain of walls which converged on a circular tower; a massive donjon (keep) was located behind the circular tower. 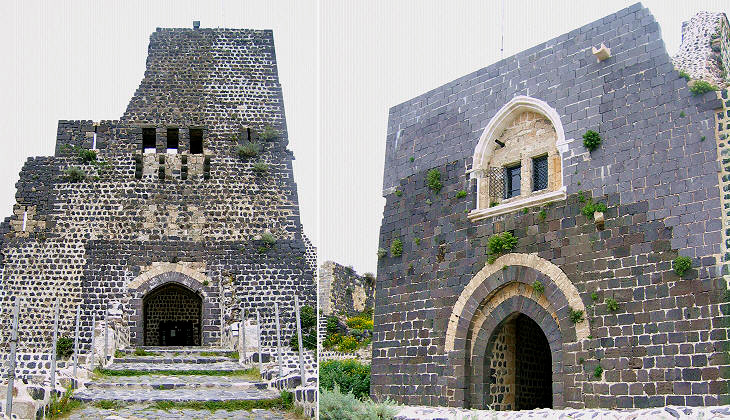 Under the buildings there are great vaults, or cisterns, cut out of the rock to preserve the rain water, and out of these that black stone was hewn, with which the greatest part of the castle is built. Pococke
This impressive castle is entirely built with black basalt stone; some nice decorative effects were obtained by using limestone; this practice was common throughout the region although in general limestone prevailed over basalt (as at Aleppo and Hama, but not at Diyarbakir which is as black as Marqab). 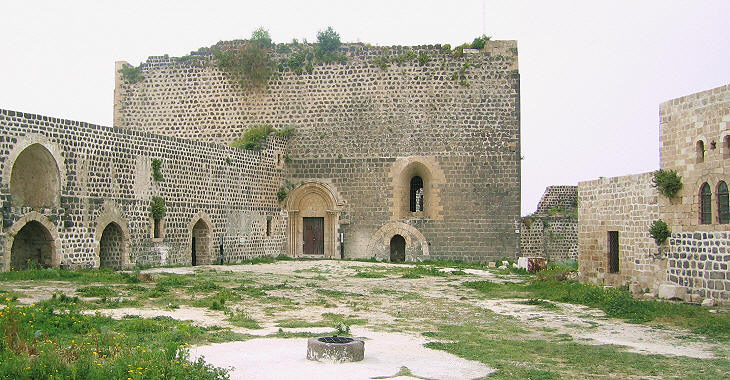 The number of knights residing at Marqab was rather limited; they lived in the upper part of the castle, which resembled a French one, with a courtyard surrounded by a church, a hall for meetings, barracks and offices; this somewhat palatial set up is justified by the fact that for a period the Grand Master of the Order resided at Marqab. 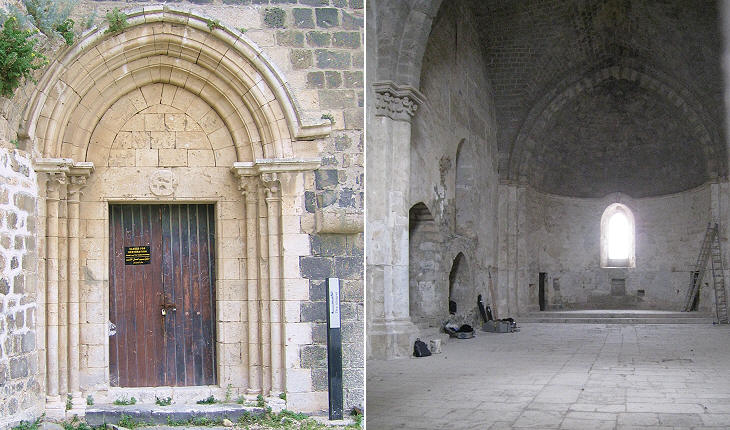 Church: (left) side portal in the main courtyard; (right) interior

The church which is towards the east end of the castle is well built, mostly of a black stone; it is adorned with semicircular pilasters of the Corinthian order, which are tolerably well executed;(..) Adjoining to the church on the east are some large rooms. Pococke
The Hospitallers did not forget they were a religious order and they built a church which retains in part an elegant decoration. 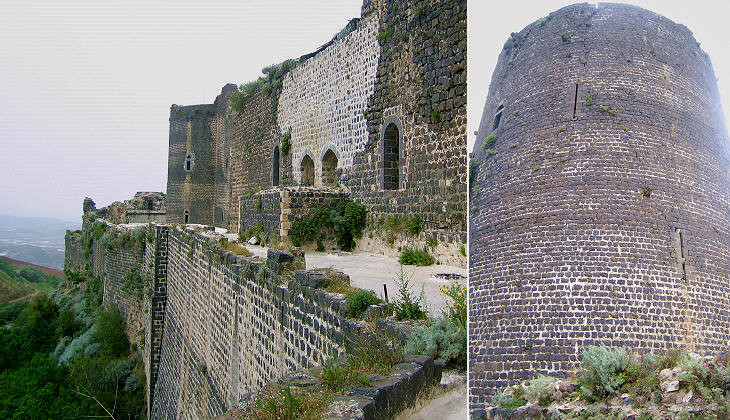 At the east and west end there are two very large round towers, each of which encompasses a small court. They have a tradition, that this castle was a work of the Franks, and it was certainly held by the knights of Jerusalem. The governor said to us, "This fabric was raised by your fathers, and we took it by the sword". Pococke
In 1188 Saladin, the conqueror of Jerusalem, made an attempt to seize Marqab and Krak des Chevaliers, but the Knights Hospitallers managed to defend both castles; the great Muslim commander consoled himself by seizing Saone. In 1271 Mameluke Sultan Baibars conquered Krak des Chevaliers, but admitted defeat in front of the walls of Marqab.
In 1285 Sultan Qulawan at the head of a large army and with specially built war engines laid siege to Marqab; the first assault on the tower where the walls converged was repelled; Qulawan then invited a delegation of knights to come and see the damage his sappers had done to the fortifications; they understood they had no real hope to keep the place and in return of safe conduct to Tortosa they surrendered it. Qulawan established a Mameluke garrison in Marqab which he used as a basis for the final attack on Tripoli, which fell in 1289.