- En Route to Antioch
(detail of a sarcophagus)

This page deals with some cities and monuments located in the north-eastern corner of the Mediterranean Sea, belonging to the historical regions of Cilicia (today Cukurova) and Syria, as shown in the maps here below. Part two is dedicated to some Roman Mosaics found near Antioch.

Map of the region covered in this page

This region was strategically important as it allowed access to Asia Minor and Europe (through the Cilician Gates in the Taurus range), to Mesopotamia and Asia (through the River Euphrates) and to Egypt (through the River Orontes) and Africa. Sumerians and Hittites, Assyrians and Persians fought to control the region until in 333 BC Alexander the Great defeated the Persian army at Issus and ensured this land to the Hellenized world for more than a thousand years. At the death of Alexander the region became a key part of the empire founded by Seleucus, one of Alexander's generals.
The Romans conquered the region in the IInd century BC at the end of the three Macedonian Wars. The Arab expansion reached this area in the VIIth century AD, but in the Xth century the Byzantines re-established their rule. In 1097 the First Crusade created a feudal state (Principate of Antioch), which lasted until the XIIIth century. From this time on Seljuks, Armenians, Egyptians, Venetians and the Kings of Cyprus all competed for control of this area; eventually in 1517 Sultan Selim I conquered it and expanded the Ottoman Empire to Syria and Egypt. After World War I part of this area was included in the French Mandate of Syria. It became part of Turkey in 1938.

Tas Kopru (stone bridge) and in the background Sabanci Camii; (left inset) Hittite relief in the Museum of Adana; (right inset) detail of Ulu Cami, a mosque built in the XVIth century which shows the influence of Arab architecture in the use of black and white stripes

Adana is located at the centre of the coastal plain of Cilicia and today it is the fourth city of Turkey with nearly 2,000,000 inhabitants. Its landmark is the modern mosque erected by Mr. Haci Homer Sabanci, owner of a large corporation. The building is a sort of compilation of different styles, but it is clearly inspired by the mosques of Istanbul. Adana has some other interesting monuments which you can see in a page dedicated to this city. 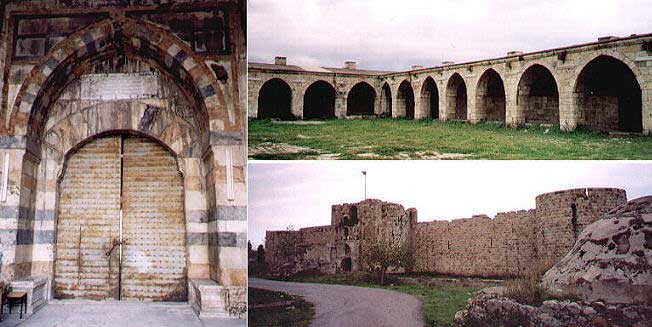 Near the town of Payas there is a very interesting complex of XVIth century buildings aimed at supporting trade between Constantinople and Syria. The Ottomans had a very well organized land trade system, based on regularly planned caravans and on a series of hans where caravans could safely rest and buy provisions. The han (caravanserai) near Payas is named after Grand Vizier Sokullu Mehmet Pacha and it consists of stables for horses and camels, of a bedesten (a covered bazaar), several hammam (baths) and mederse (theological schools) and a mosque; the caravanserai was protected by walls and by a small fortress.

Less than a mile away another very small fortress shows a different origin. The design is clearly Italian and most likely the fortress was initially built by the Crusader Principate of Antioch and then upgraded to respond to the needs of artillery warfare by the Venetians to protect their trade in the area (Cyprus which is not far away from the Asian coast, was a Venetian possession until 1571).

(left) Views of the sea promenade (in the background of the lower photo: the Rock of Gibraltar at the opposite end of the Mediterranean Sea - photo taken on April 1, 2002); (right) monument to Ataturk

Alexandretta (in Turkish Iskenderun) was founded by Alexander the Great in 333 BC, after the victory at Issus. It is the first of many towns named after him. The development of Alexandretta was relatively limited as a few years later Seleucus founded another port in the area (Seleucia Pieria) which became the most important of the region. Today Alexandretta has a busy industrial harbour (oil, steel, cement) and a very fine sea promenade, but almost no evidence of its ancient past. 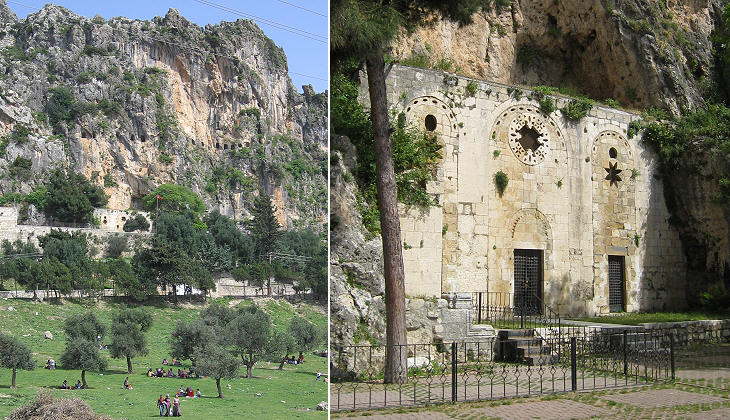 (left) The rock where St. Peter's cave is located (near the red flag); the rock has many other caves which appear to have been modified by man; (right) XIXth century façade of St. Peter's cave

Antioch (today called Hatay or more often Antakya) is named after the wife of Seleucus, who enlarged a town founded in 307 BC by Antigonus, another of Alexander's generals. It was called by the Romans Antiochia ad Orontes with reference to the river which crossed it (see pages on other ancient towns on the Orontes: Apamea and Hama). Antioch soon became the most important city of the area. In the IInd century AD it had 500,000 inhabitants and with Alexandria it was for several centuries the main centre of this part of the Eastern Roman Empire. Antioch played a great role in the early development of Christianity and St. Peter and St. Paul are said to have lived there for many years. A cave in the outskirts of the ancient city is considered the most ancient church and it was visited by Pope Paul VI in 1962. Minarets: (left) Habib Neccar Camii (the mosque is located near the assumed centre of the ancient city); (centre) a mosque in the bazaar; (right) Ulu Cami

Because of earthquakes in the VIth century and because of the effects of Arab expansion, Antioch declined. It eventually became the capital of a Crusader state, but this only contributed to reducing its importance as a trading centre; in 1268 it was conquered by the Egyptian Mamelukes who destroyed it.
Excavation campaigns in the 1930s have failed to identify significant ruins of the ancient city; in particular archaeologists looked vainly for a great church built at the time of Emperor Constantine. 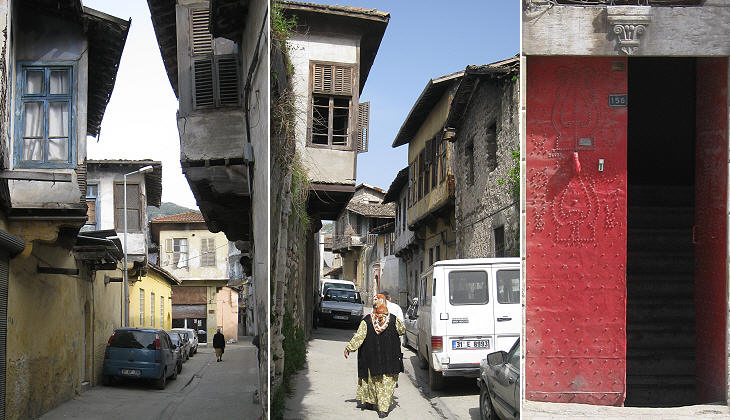 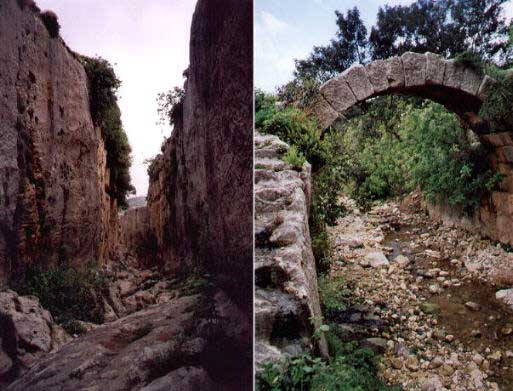 (left) The canal; (right) arch of the aqueduct

Seleucia Pieria was founded by Seleucus to provide Antioch with a port. Its importance was such that at the time of Emperor Vespasian, the Romans cut a canal into a hill to divert a stream which threatened to flood the town. The walk along the (now dried) canal, which includes several tunnels, is very evocative; only a few sections of the fortifications and arches of an aqueduct can be detected in the vegetation which covers the hill where the ancient acropolis was located.

According to Greek mythology, Apollo (struck by Eros with a golden arrow) fell in love with Daphne, a priestess of Mother Earth and he pursued her. Eros however struck Daphne with a lead arrow, which made her afraid of love. When Apollo overtook Daphne, she cried out to Mother Earth, who, in the nick of time, spirited her away and left a laurel tree in her place. Apollo made a wreath from the leaves of the laurel tree to console himself. The background of this page is based on Bernini's masterpiece Apollo and Daphne in Galleria Borghese in Rome and it shows Daphne being turned into a laurel tree.
The site of the event was identified in a laurel wood near Antioch. Louvre Museum in Paris: Mosaic of the Four Seasons found at Daphne

With the development of Antioch many villas were built on this site during the IInd - Vth centuries AD and the location became so famous that Antioch was named after it ad Daphne rather than ad Orontes. 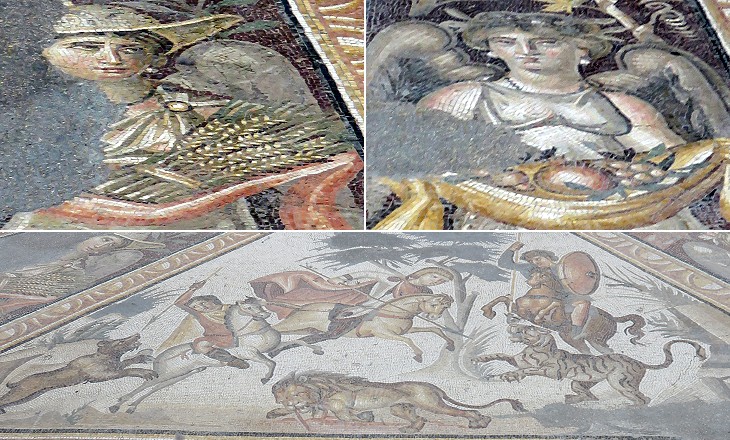 Louvre Museum in Paris: Mosaic of the Four Seasons - details

Daphne (in Turkish Harbiye) is today a holiday resort where the citizens of Antioch go to seek some breeze and have a picnic in the woods which surround it. There is very little evidence of the temples built in honour of Apollo and other gods, but walking in the woods is very pleasant.

Move to page two: The Mosaics of Antioch.