- The Roman mosaics
(detail of a sarcophagus)

The Museum of Antioch was initially built during the French Administration in the 1930s. It was enlarged in the 1970s. It contains interesting statues and jewellery of the Hittite, Assyrian and Roman periods, but it is known worldwide for its large Roman mosaics. The mosaics span from the IInd to the Vth centuries AD and they were mainly found in the villas built near Daphne. A few of them were moved to Paris. 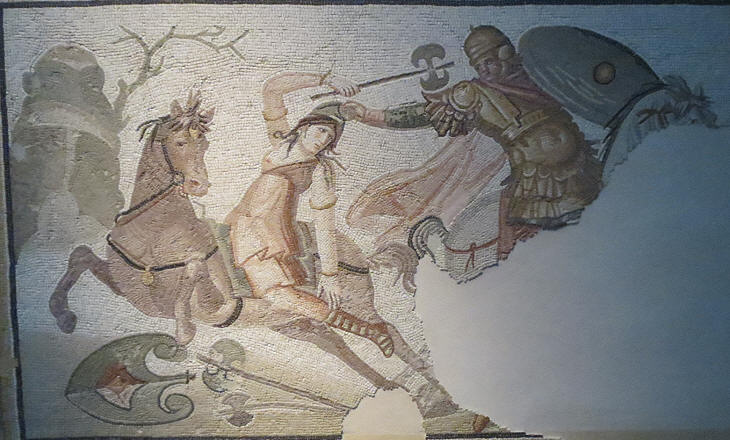 The University of Princeton had a major role in the research, restoration and classification of the mosaics.
The photos shown in this page were taken with a basic digital camera and without using flash, thus they do not include some very large mosaics, but only details of them. 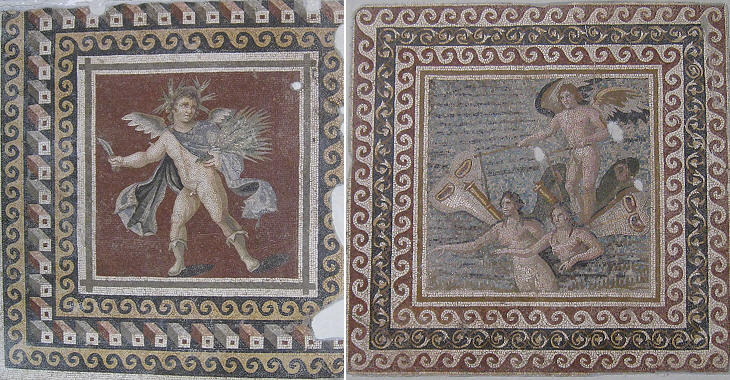 The warmth of the climate disposed the natives (of Antioch) to the most intemperate enjoyment of tranquillity and opulence; and the lively licentiousness of the Greeks was blended with the hereditary softness of the Syrians. Fashion was the only law, pleasure the only pursuit, and the splendour of dress and furniture was the only distinction of the citizens of Antioch. Today this quotation by Edward Gibbon's Decline and Fall of the Roman Empire may not be regarded as being scientifically accurate, but it explains the attention paid by the wealthiest inhabitants of Antioch to the decoration of their homes.
The mosaics from Daphne show the maturity reached by the artists who designed them and by the patrons who commissioned them. 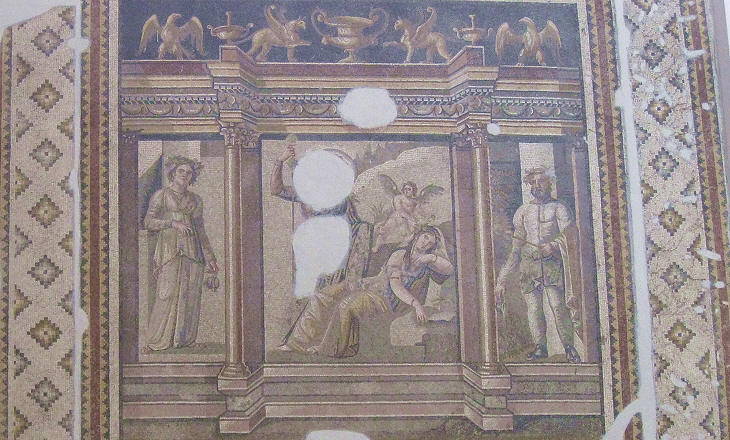 Dionysus and Ariadne (see a mosaic depicting the same subject which was found at Philippopolis) and two seasons; the upper section is decorated with a pattern which is often seen in Rome

The development of a modern theory of perspective laws in painting is generally associated with Renaissance (e.g. Baldassarre Peruzzi) and Baroque (e.g. Andrea Pozzo) artists, but finely executed fake architectures decorated the walls of Casa di Augusto and of villas of Pompeii. They are less often seen in mosaics which usually were used for the decoration of floors. 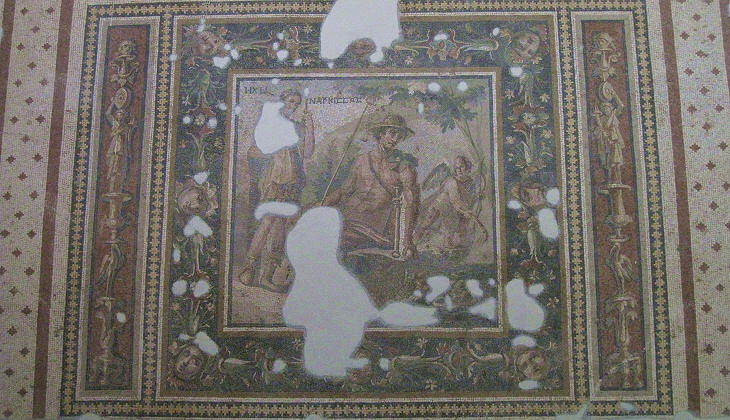 Baroque sculptors and architects had a predilection for decorating their works with small human heads (see a page on the Laughing Masks of Rome). The mosaic above shows that also the ancient mosaicists did the same: they portrayed eight human heads in different attitude along the decorative band; some of the heads are trying to look upwards towards the central scene. 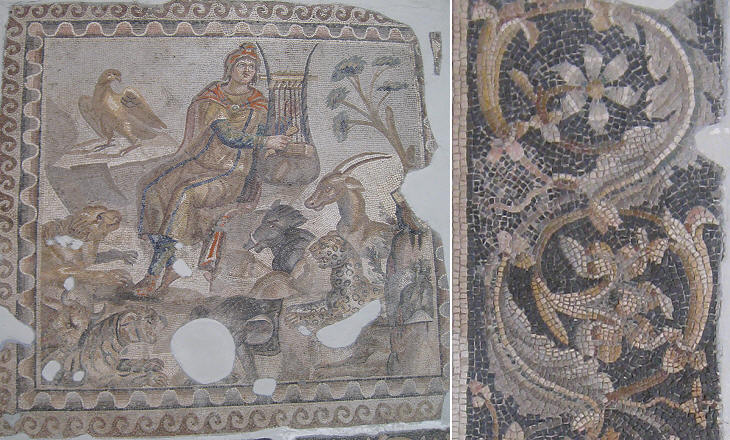 (left) Orpheus appeasing the wild animals from Tarsus; see the same subject in Philippopolis and in a marble table support from Sabratha; (right) detail of the decorative band surrounding the central scene

When we were young we all have enjoyed receiving a book with pictures of wild animals; the choice of some subjects of the mosaics was driven by the fact that they offered the opportunity to portray many animals; in this mosaic we can notice that the animals are placed in the space in a rather haphazard way, the focus being on each of them, rather than on the overall scene; the mosaicist made use of a high variety of colour nuances as the detail of the decorative band shows. 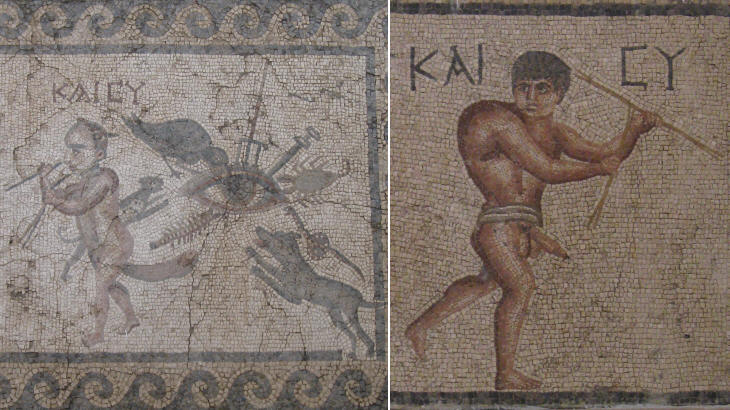 In a scene of Journey to Italy, a 1954 movie starring George Sanders and Ingrid Bergman, a British couple visits the city of Pompeii; while visiting Casa dei Vettii Bergman is dismayed at learning that she cannot see a painting representing a man weighing his enormous penis; classic artists by general convention portrayed small penises (hypo phallus), but there were some exceptions. 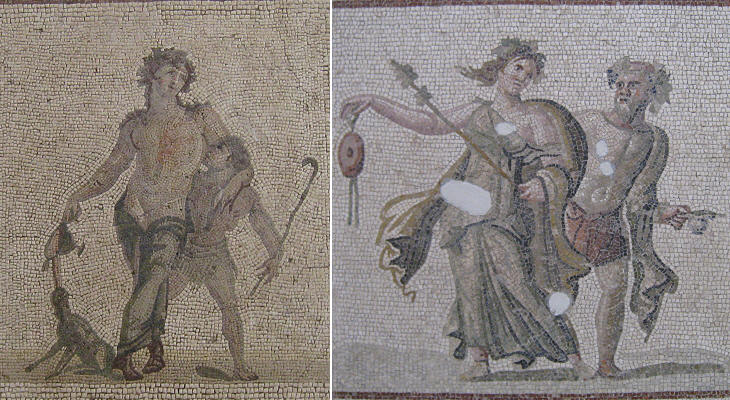 These mosaics are actually depictions of statues, in particular that of Dionysus is almost identical to Dionysus Ludovisi which was found in Rome in 1594 and to another statue which was found recently at Sagalassos. Satyrs and maenads were very often portrayed in sarcophagi, e.g. at Perge. 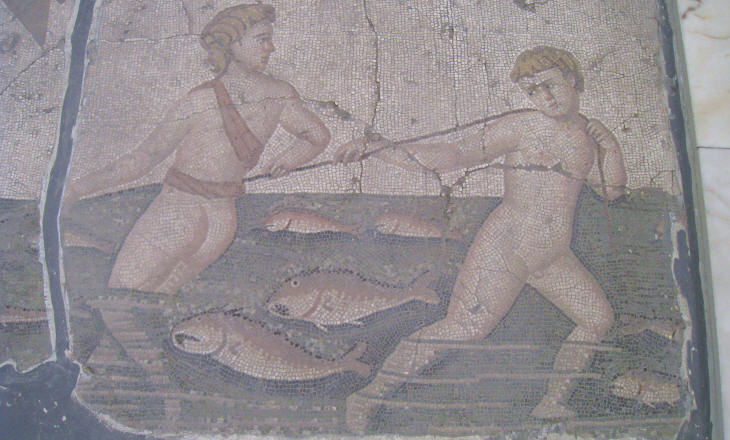 The two most striking mosaics of the Museum of Antioch are based on marine subjects: such subjects were very popular throughout the ancient world; in Rome they often decorated baths (e.g. at Ostia), but while the mosaics of Rome were black and white those of Antioch show the talented use of very many colours. See coloured mosaics portraying fishermen in Tunisia and Libya. 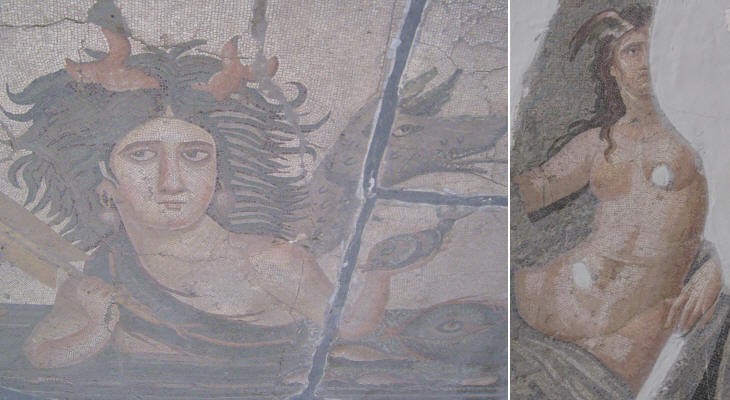 By comparing the portraits of two sea goddesses one can notice that while Thetys is portrayed in a very naturalistic way, the eyes of Thalassa anticipate those of the Byzantine icons. Thalassa continued to be portrayed in Christian floor mosaics, even in churches, as at Madaba in Jordan. 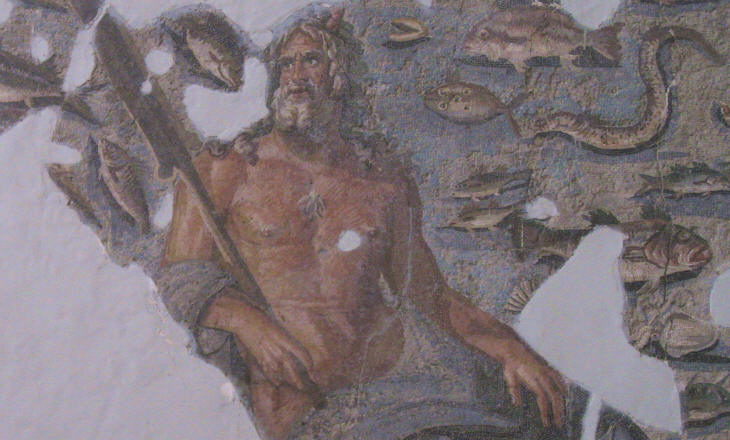 Oceanus surrounded by sea creatures was a very popular subject which has been found also in Tunisia, Spain, France and Germany. Gradually the subjects of the mosaics departed from the canons of classic art and in particular by the representation of naked personages; even before the Christian faith prevailed, the portrayal of the ancient gods was replaced by that of personified virtues; these mosaics tell us something about the fashion during the Late Roman Empire and about the jewels the richest matrons wore. You may wish to see mosaics portraying Ktisis in Lebanon and Cyprus. 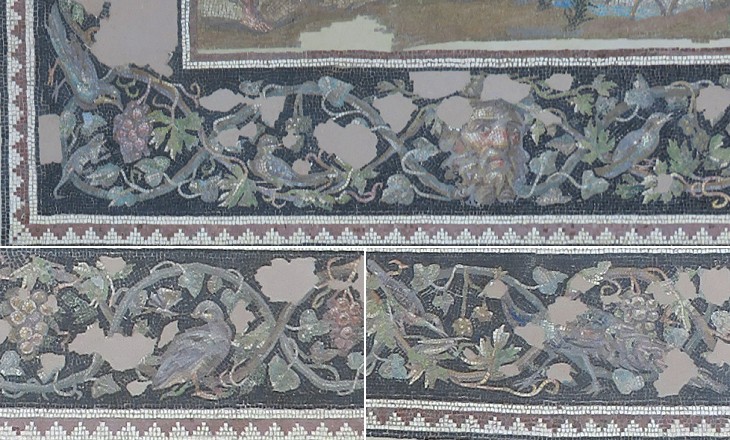 Louvre Museum in Paris: details of the decorative band of a mosaic found near Antioch

You may wish to see the mosaics in the museums of Gaziantep, Tunis and Sousse. 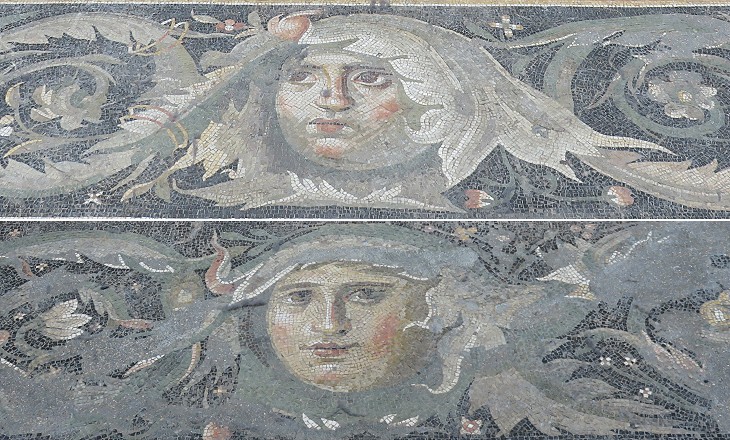 Louvre Museum in Paris: other details of mosaics found near Antioch 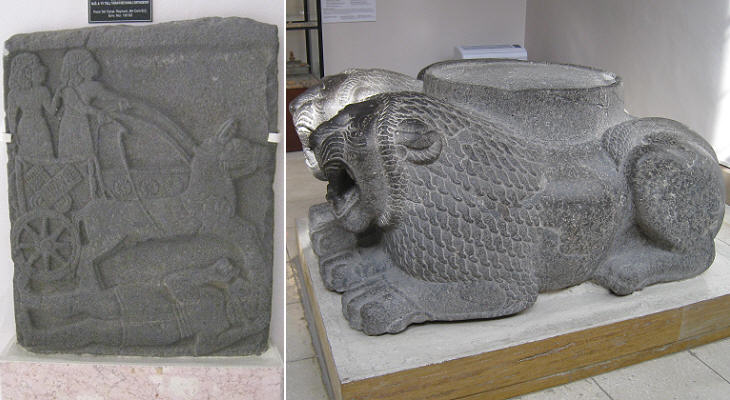 Tell Tainat (8th century BC): relief portraying charioteers running over the body of an enemy; (right) base of a temple column

The museum houses also some reliefs, statues and sarcophagi; for other Neo-Hittite works of art see pages on Karatepe and Ain Dara and for Roman sarcophagi a page on Roman funerary rites. 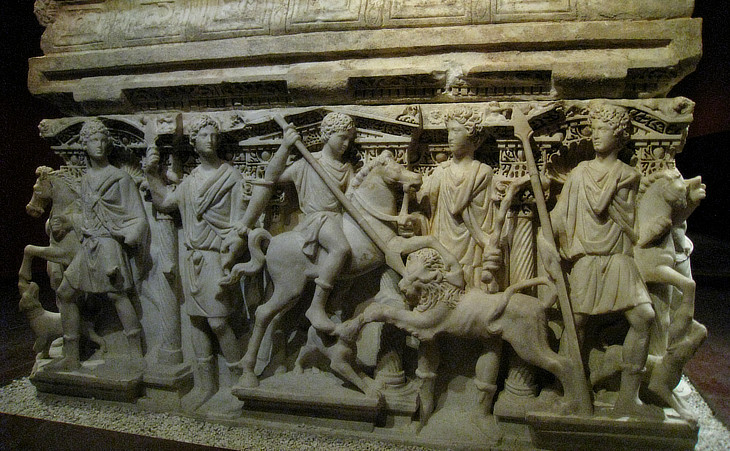 Return to page one: En Route to Antioch.