- Karatepe
(Detail of a relief at Karatepe)

Kizzuwatna is not exactly the best known kingdom of antiquity; it can be regarded as a Hittite Kingdom of Cilicia, because for some time it was a vassal state of the Hittite Empire centered on Hattusa. The main town of Kizzuwatna was Kummanni, which is thought to be the Roman town of Comana Cappadociae in the mountains north of Cilicia.

View of the southern walls

The kings of Kizzuwatna had a summer residence on a hill in the eastern part of the country; today the hill is surrounded by the branches of an artificial lake which adds to the beauty of the landscape. Karatepe, the Turkish name of the site, means "black hill", because of the dark forest which covers it. Excavations started in the 1940s and they led to the discovery of a bilingual inscription dictated by King Azatiwadda; this inscription in Phoenician and Luwian helped in deciphering the latter alphabet and by consequence many inscriptions found here and at Hattusa. 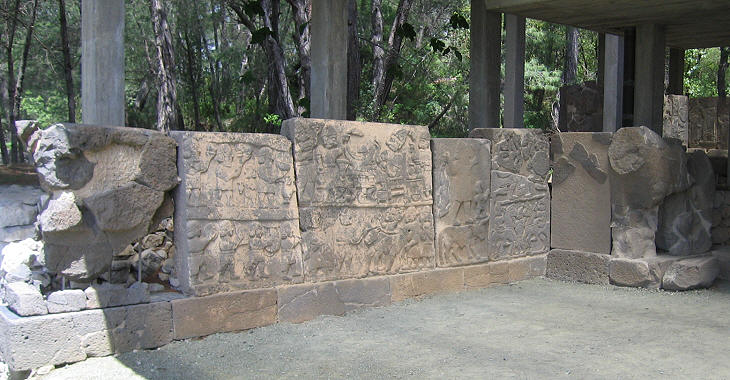 The royal residence was surrounded by walls and it had two entrances having a T shape, i.e. a corridor followed by a hall; they were flanked by towers which no longer exist. The efforts made to fortify the site were minor when compared to those made to decorate it, so probably the kings of Kizzuwatna did not expect to be attacked at Karatepe, where they went to escape the heat of the Cilician plain. King Azatiwadda described himself as the lord of Adana where summers are very hot. 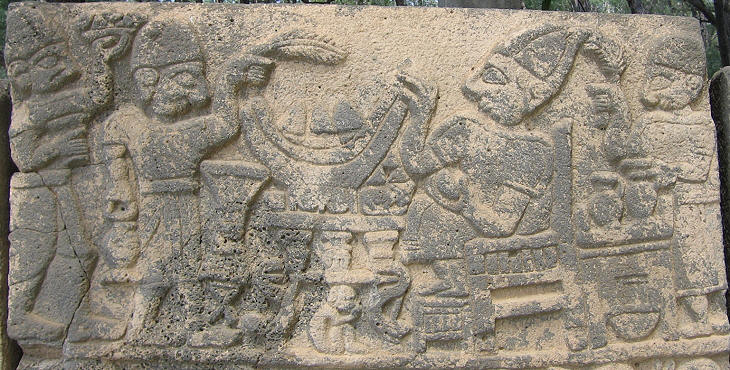 Southern gate: banquet of the king

While the Hittite reliefs at Yazilikaya decorated funerary monuments and they depicted processions of kings, priests and warriors, those at Karatepe have much lighter subjects and they portray people in a very informal way. The banquet of the king is a very joyful scene, with even a small monkey under the table. 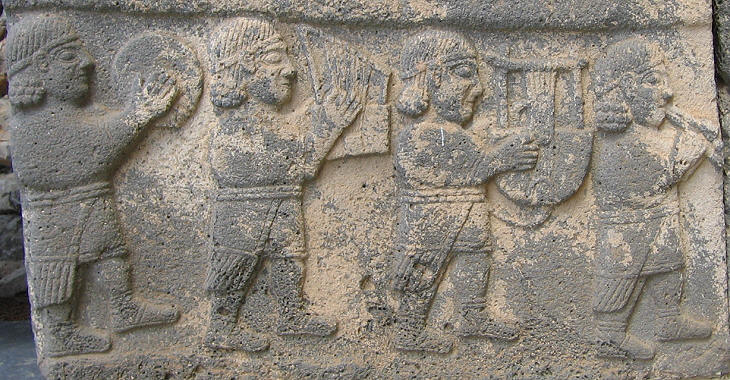 The king was entertained by musicians; the relief is full of life; the musician at the end of the group seems to be keeping time. The reliefs at Karatepe give an insight into many aspects of the life of a complex society. 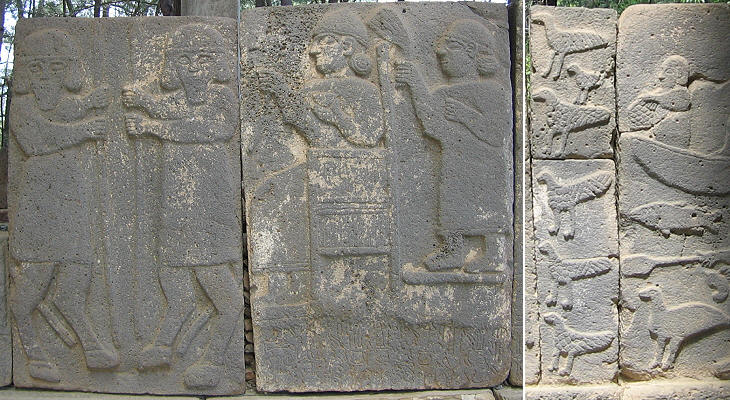 The reliefs and the whole residence date back to the VIIIth century BC; the kings of Kizzuwatna did not enjoy the pleasure of this place for long because in 720 or in 680 BC their country was invaded by the Assyrians and Karatepe was looted and burnt down. Similar to Hattusa stones and masonry were used only for the lower parts of buildings, walls and monuments; these were completed with mud and timber structures.

The northern gate is similar to the southern one but more fragments of it have been found so its reconstruction is more complete. There is no evidence of a gate which supports the idea that the location was felt to be secure.
King Azatiwadda claimed in his inscription:
(33) In my days I extended the Adanawean frontiers on the one hand towards the west and on the other hand towards the east
(34) and even in those places which were formerly feared
(35) where a man fears to walk the road
(36) so in my days a woman walks alone with spindles.
Translation by Prof. J. D. Hawkins. 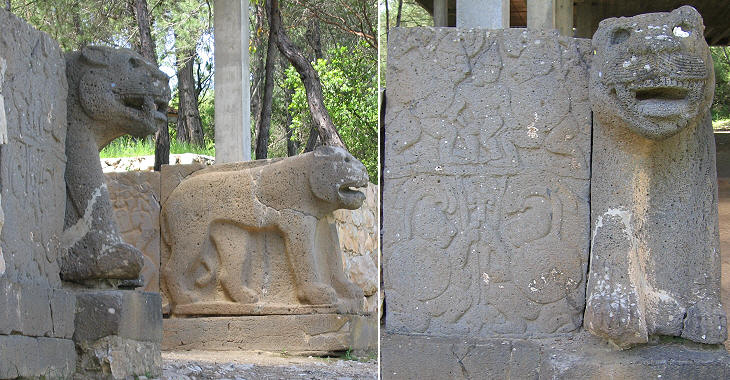 In line with tradition the gate was guarded by lions; in this case however the unknown artist chose a very elaborate solution: the head projects from the wall line and is a sculpture while the body is a relief. 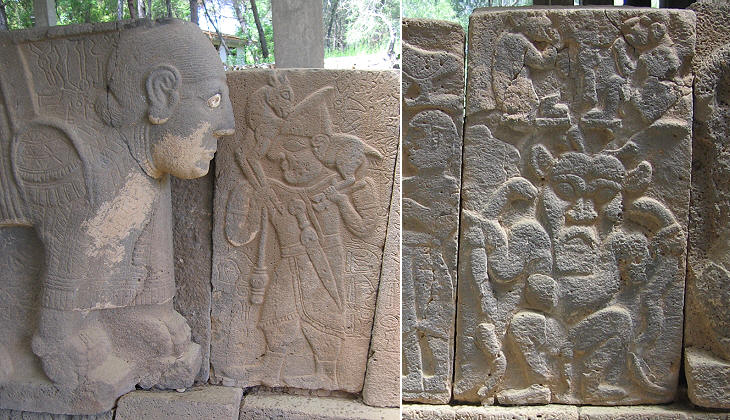 Some of the panels and the statues are covered by Luwian hieroglyphics; unlike the Egyptian ones, these apparently do not seem to be arranged in a precise order; some of the reliefs bring to mind deities of other civilizations, i.e. Hermes Kriophoros and Bes. 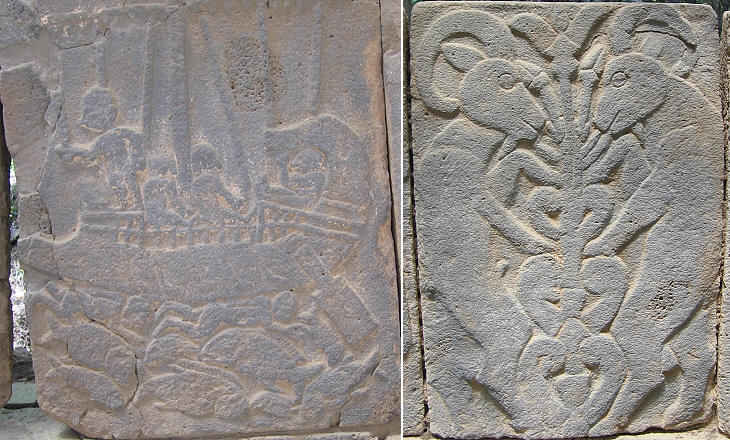 One of the most interesting reliefs depicts a ship; it has many points in common with those of Egypt and in particular the stern having the shape of a lotus flower; a large paddle was used to steer the ship; three men on the deck seem very relaxed while a fourth man watches the bodies of dead enemies. The reliefs do not seem to be placed according to a logical sequence; there are panels portraying warriors next to others which are similar to medieval coats of arms such as that showing two rampant goats at the sides of a tree of life. The image used as background for this page shows a statue portraying a god. 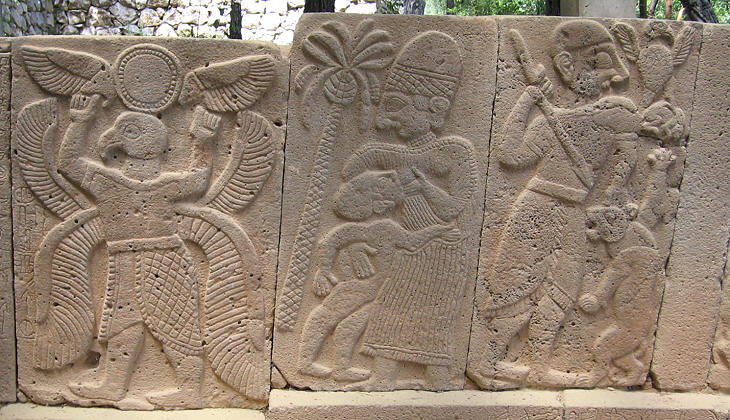 Maybe not because of his military conquests, but the wish of King Azatiwadda is fulfilled:
(76) Hereafter may Azatiwadda's name continue to stand for all ages
(77) as the Moon's and the Sun's name stand. 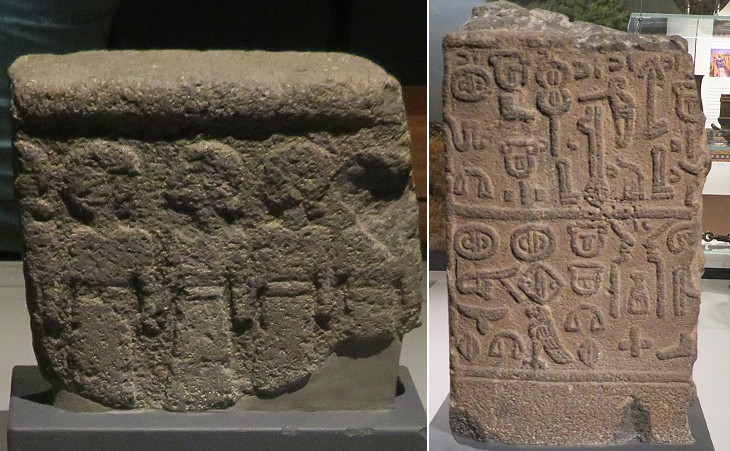 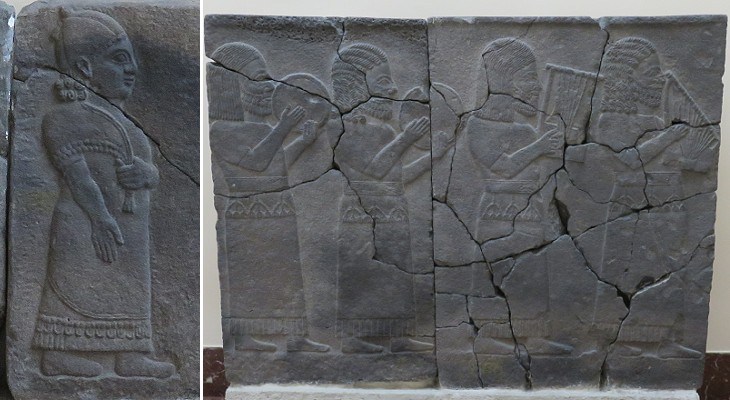 Museum of Ancient Orient of Istanbul: reliefs found at Zincirli, another Hittite archaeological site in the region near Gaziantep 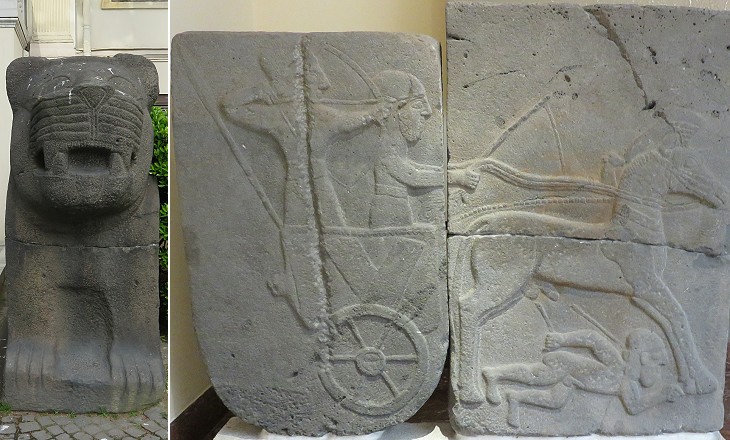 Museum of Ancient Orient of Istanbul: (left) Hittite Lion at the entrance to the Museum; (right) another relief found at Zincirli