If you came to this page directly, you might wish to read a page on Roman Rieti first. 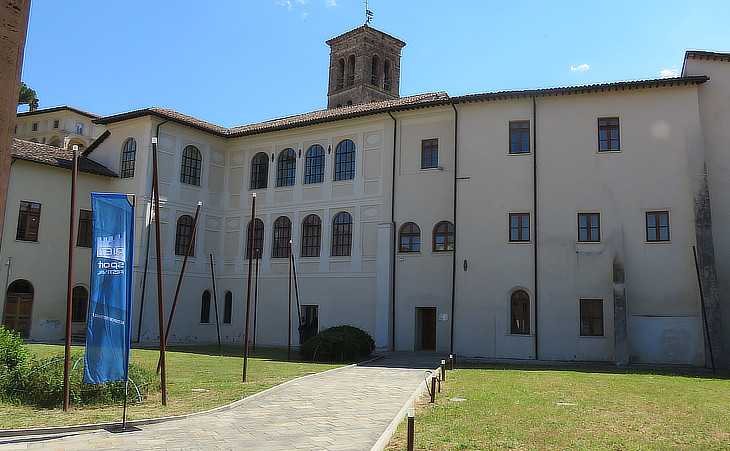 Former nunnery of St. Lucia which houses the Archaeological Museum of Rieti

In the late XVIth century a series of Roman inscriptions were sheltered in the portico of the Town Hall. In 1911 these inscriptions and other ancient items which were found in town and its environs were moved to a wing of the Town Hall, together with paintings and statues from deconsecrated churches. In 2001 the ancient exhibits were moved to a former nunnery at the foot of the Cathedral very near some Roman walls. 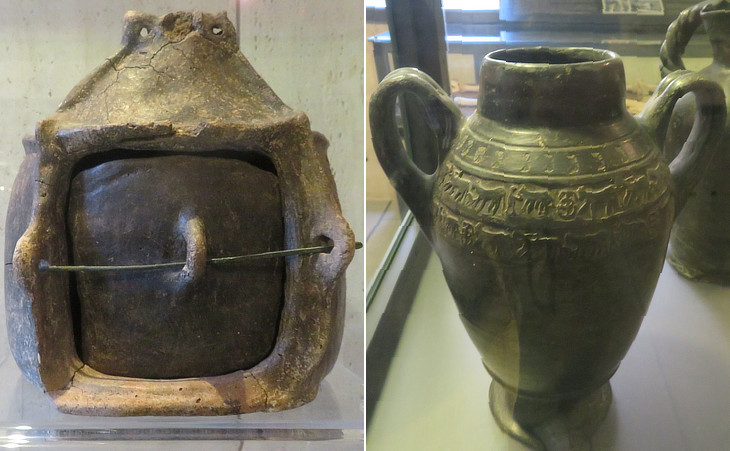 The Latin writers were evidently acquainted with no people of Italy more ancient than the Umbri. (..) The Umbri were already settled in Italy long before the arrival of the Etruscans. (..) Dionysius of Halicarnassus appears to have considered the Umbri as an indigenous race, whose primary seat was the country around Rieti, a district which, according to Dionysius, was formerly occupied by the Aborigines. He was also of opinion, that the Sabines were descended from the Umbri; the Umbri having extended themselves into various parts of Italy, and in particular into the Sabine country, this last colony, upon becoming numerous and powerful, detached itself from the parent race, and subsequently drove them from their possessions near Rieti and the adjacent district.
John Anthony Cramer - A Geographical and Historical Description of Ancient Italy - 1826
The bucchero vase indicates that the inhabitants of Rieti were in touch with the Etruscans who created this type of vases resembling bronze. Pottery (Vth-IVth centuries BC): (left) oinochoe or "wine pourer", the jug in which the wine was transferred from the crater to the goblets of the guests; but the term is used generically in reference to any pitcher or ewer; (right) kylixes, wine-drinking cups, with a decoration depicting the Rape of Europa and a satyr

The Etruscans imported red-figure pottery from Greece or from Greek colonies in Italy, e.g. Tarentum (see a kylix from that town). Over time local workshops were able to replace the Greek ones, but they did not change the subjects of the decoration. 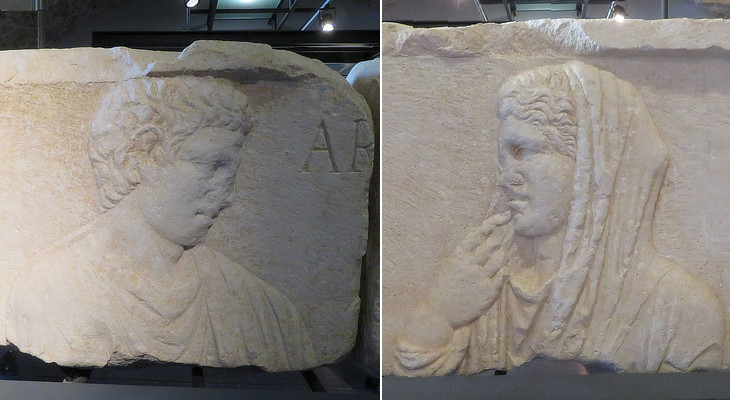 The reliefs portray a couple facing each other. It was customary for couples to be portrayed in funerary monuments while re-enacting their wedding ceremony by shaking their right hands (see a sarcophagus at S. Saba and another one at S. Lorenzo). In this monument perhaps another moment of the ceremony was depicted: the bride slightly removes the flammeum, the red veil which covered her head, so that the groom can see her for the first time. The act of marriage for women was called nubere which meant "to take the (flammeum) veil" (hence nuptial). The Nozze Aldobrandini is a famous Roman fresco depicting various scenes of a wedding ceremony. 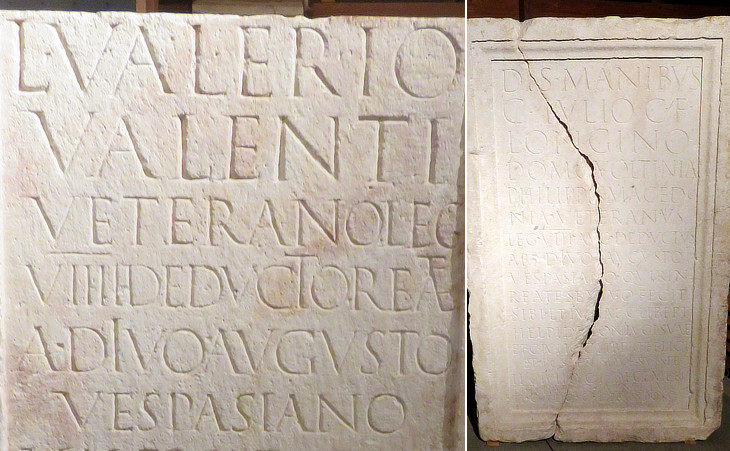 The inscriptions are related to two veterans whom Emperor Vespasian assigned land in the countryside of Rieti, his hometown. Valerius Valens is recorded as a veteran of the IXth legion, which is rather puzzling because this legion is thought to have been nearly destroyed at Camulodunum in Britain. Iulius Longinus, from Philippi in Macedonia, was a veteran of the VIIIth legion. The legion was stationed in Pannonia and it supported Vespasian after the death of Otho. 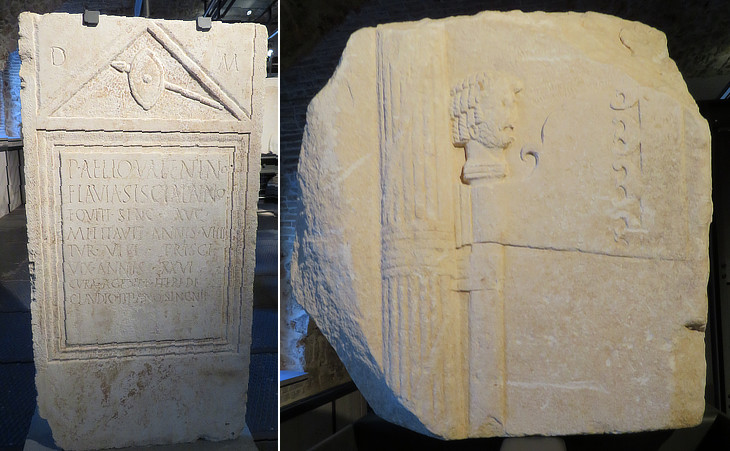 The decoration of the tombstone of P. Aelius Valentinus depicts a hasta (spear) and an oval shield; the shape of the latter and the inscription indicate that he fought in a turma as a cavalryman. He was stationed at Flavia Siscia, a Roman colony in Pannonia. He died age 26 and the stela was erected by Claudio Titiano, a signifer (standard bearer) of the same unit; see tombstones of other auxiliary cavalrymen in Britain and Germany.
The inscription of a tombstone which was decorated with an elaborate bundle of rods with a projecting axe-blade was most likely that of a magistrate of the town. The small head with curled hair probably indicates that the magistrate held some offices in Africa or had been the commander of troops from that province (see the curled hair of the Moor cavalrymen who fought for Trajan). 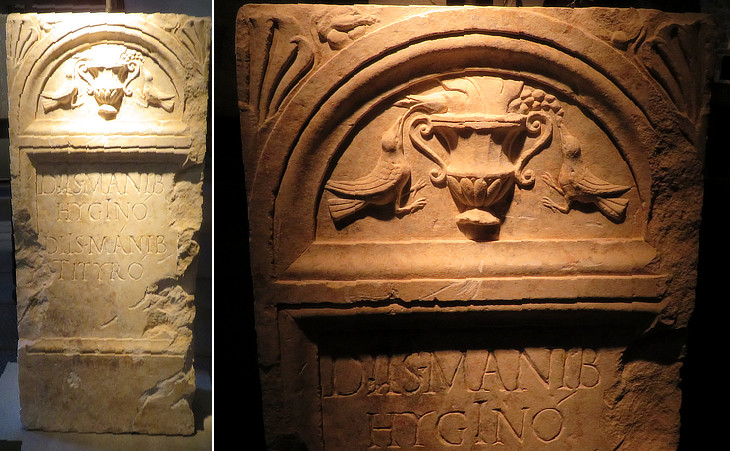 The living conditions of slaves in Roman society could greatly vary. This interesting tombstone suggests that Hyginus and Tityrus were well treated by their master, perhaps they were vernae (slaves born in the household) or they assisted him in his activities or were tutors of his children. See a tombstone of a verna at Avignon and another one for two young slaves at Cologne.
The depiction of two doves picking up a pomegranate and a bunch of grapes coming out of a krater hints to some sort of afterlife and with minor changes it will become a Christian symbol of Divine Grace. The broken relief was found in 1863 along Via Salaria, south of Rieti. It depicts a venatio, a combat between men (known as bestiarii or venatores), and beasts (see a mosaic from Leptis Magna). The animals, a lion, a big cat and a bear are overpowering the bestiarii who have only a limited protection against their assaults. It is possible that the funerary monument was erected to a personage who had offered these fights as an entertainment or that the venatio was part of the ceremonies for his funeral (see a funerary monument depicting gladiatorial combats at Lucus Feroniae).
The fragment of the sarcophagus depicts three erotes performing a ceremony: that to the right wears a cloak and holds a pedum, a shepherd's stick and a patera, a round saucer with the raised knob in the centre which was often placed in a hand of the statue of a dead man (see a sarcophagus at Tarquinia). (left) Fragment of relief depicting a "camillus" which was found in the site of the Roman forum of Rieti; (right) head of a statue

CAMILLI, CAMILLAE, boys or girls employed in the religious rites and ceremonies of the Romans. They were required to be perfect in form, and sound in health, free born, and with both their parents alive; or, in other words, according to the expression of the Romans, "pueri seu puellae ingenui, felicissimi, patrimi matrimique". The origin of these words gave rise to various opinions among the ancients. But we know nothing certain on the matter.
CALAMISTRUM, an instrument made of iron, and hollow like a reed (calamus) used for curling the hair. For this purpose it was heated, the person who performed the office of heating it in wood-ashes (cinis) being called ciniflo, or cinerarius. (Hor. Sat, I 2. 98; Heindorf ad loc.) This use of heated irons was adopted very early among the Romans (Plaut. Asin. III, 3, 37), and became as common among them as it has been in modern times. (Virg. Aen. xii 100.) In the age of Cicero, who frequently alludes to it, the Roman youths, as well as the matrons, often appeared with their hair curled in this manner (calamistrati). We see the result in many antique statues and busts.
William Smith - A dictionary of Greek and Roman antiquities - 1859
The fragment was most likely part of a relief dedicated to a local personage or event. The camillus most likely held a patera or a vase for libations. His curled front hair suggests that the relief was made at the time of Emperor Nero.
A fine broken sculpture of a woman is assumed to portray a maenad, a follower of Dionysus/Bacchus because of the ivy flowers on the head, although it does not fit with the traditional iconography of maenads who were portrayed while dancing and playing a tambourine, e.g. at Sousse and Italica.

Terracotta decoration of the roof of a Roman villa at Cottanello, west of Rieti

Evidence of a Roman building emerged in 1944 when the Germans blew out an ammunition depot. Proper excavations began in 1969 and were often interrupted because of lack of funds. It was a rural villa of the Augustan age, which belonged to the Aurelii Cottae, perhaps to Marcus Aurelius Cotta Maximus Messalinus, a friend of Emperors Augustus and Tiberius and a patron of Ovid. The roof was decorated with terracotta panels, similar to those which were used by the Etruscans, with gargoyles depicting Gorgons. 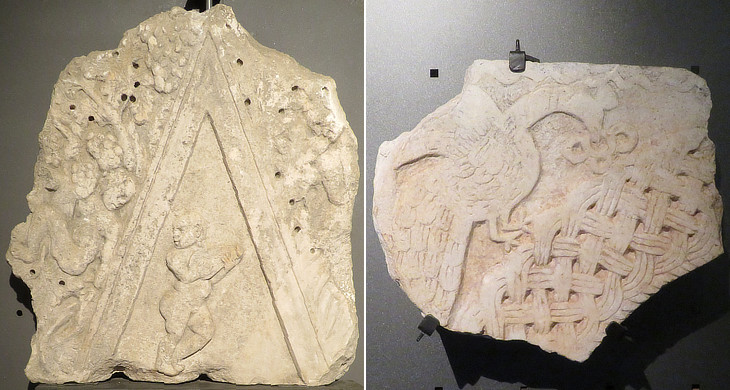 Reliefs which were donated by the chapter of the Cathedral: (left) IInd century AD; (right) VIIIth/IXth century

Putti working in a vineyard became a popular early Christian subject, but in this relief a satyr is portrayed while picking up a bunch of grapes, whereas the putto plays an instrument which greatly resembles a violin, but actually was a lute.
The relief depicting a peacock, another popular Christian symbol, was most likely part of a transennae, a parapet separating the altar from the nave which was typical of the design of early churches, e.g. S. Clemente in Rome. See a finer similar relief of the same period at Brescia.
The image used as background for this page shows a decorative motif of a Ist century AD marble lintel.