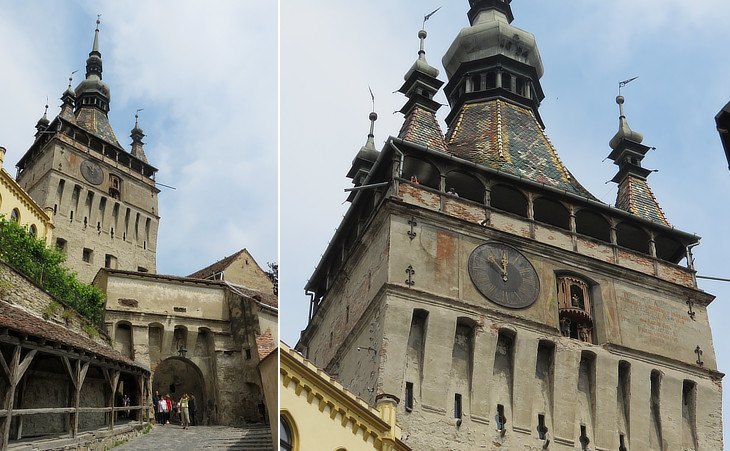 Sighisoara, Hung. Segesvar, Ger. Schassburg, a royal free town, was founded by the Saxons. The town contains 11,550 Saxon, Hungarian, and Roumanian inhabitants. It is picturesquely situated at the entrance to the Schaas valley, at the foot of the Burg, the wall of which is partly preserved. The "Stunden-Turm", contains the municipal museum of antiquities, art-industrial objects, weapons, etc.
1911 Baedeker's Guide Book of Austria - Hungary, with excursions to Cetinje, Belgrade and Bucharest.
The imposing Clock Tower plays a special role as the symbol of the town, for it was placed under the responsibility of the city council, which held its assemblies there until 1556. Situated in the middle of the southern fortification wall, it dominates the three squares of the historic centre and protects the stairway connecting the upper town and the lower town. It now houses a museum.
UNESCO documentation supporting the inclusion of the Historic Centre of Sighisoara in the World Heritage List in 1999.
The four small turrets around the main one indicate that the magistrates of the town had the right of sentencing to death. They can be noticed also in other monuments of Transylvania, e.g. Katharinen-Tor at Brasov and Evangelical Church at Sibiu. 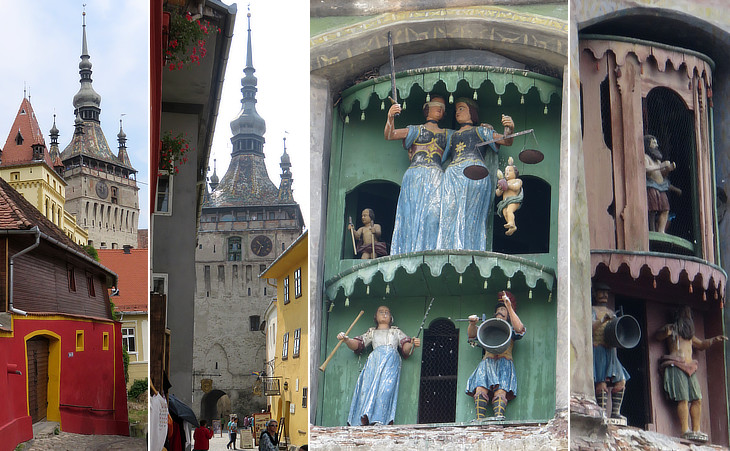 Houses near the Clock Tower and its two automated clocks

Archaeological excavations carried out in the Citadel have disclosed remains of wooden houses dating to the 13th-14th centuries. Their foundations were incorporated in the stone houses of the 15th-16th centuries, most of which were rebuilt after the 1676 fire. The houses, most of them the simple homes of craftsmen of two or three storeys, were built in stone or brick, covered in a coloured roughcast, and topped by a high tiled roof. They have a distinctive plan, with a narrow facade along the street, an L- or U-shaped layout, dwelling tower, linked rooms, etc. Many of the houses still have a barrel-vaulted basement, workshops on the ground floor with a wooden ceiling or brick vault, and the living rooms on the upper floors. A group of houses between Citadel Lane and Hermann Oberth Square stand out because of the way the storeys have been arranged to fit the configuration of the sloping ground. UNESCO
The clock mechanism, originally made of wood, was replaced by a metal one after the great fire of 1676. The tower was renovated, and groups of wooden statuettes also appeared. The figurines, towards the lower town, represent symbols of the days of the week, and towards the fortress, peace and justice. A drummer beats the quarters of an hour. 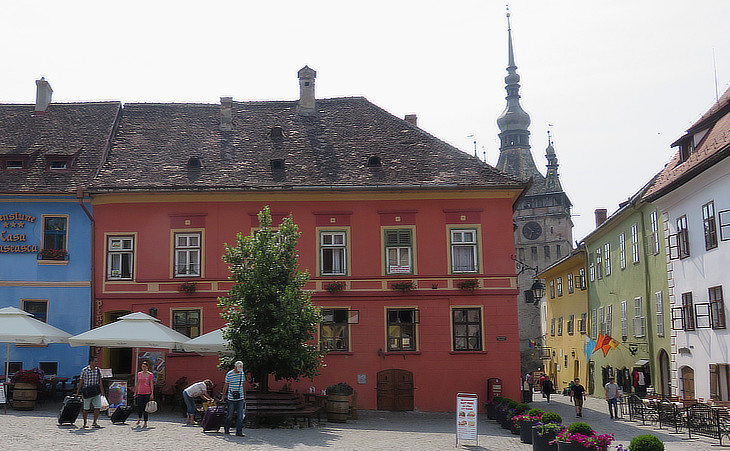 A few facades (Citadel Square, for instance) have a more aristocratic architectural style of Baroque inspiration (17th-18th centuries). (..) Sighisoara is an outstanding testimony to the culture of the Transylvanian Saxons, a culture that is coming to a close after 850 years and will continue to exist only through its architectural and urban monuments. UNESCO
The square housed markets, craft fairs and public executions. It forms an armonious ensemble, notwithstanding the different architectural styles. 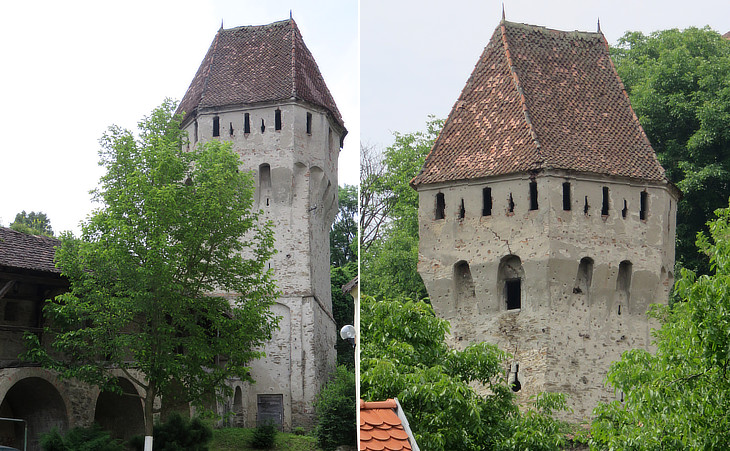 The Tinsmiths' Tower (Romanian: Turnul Cositorarilor, German: Zinngiesserturm), also in the image used as background for this page

In the 13th century, German craftsmen and merchants, known as Saxons, were ordered by the Hungarian sovereigns to colonize Transylvania and protect the border of the Carpathians against the steppe peoples. (..) Sighisoara is a fine example of a small, fortified medieval Saxon town which played an important strategic and commercial role on the fringes of central Europe for several centuries. (..) The importance of the town was recognized in 1367 when it obtained the title of Civitas and became the second national political entity of Transylvania. Under pressure from the Turks between 1421 and 1526, the fortified city raised its walls. UNESCO
The Tinsmiths' Tower, together with the Clock Tower, dominates the lower part of the city. It was built along the wall, and suffered a lot from earthquakes and fires, but it was always rebuilt. In 1583 the most important reconstruction took place. It now has a height of 25 m and a very varied shape, i.e. a rectangular base, a pentagonal trunk, followed by the last octagonal floor, and a hexagonal roof with unequal sides. 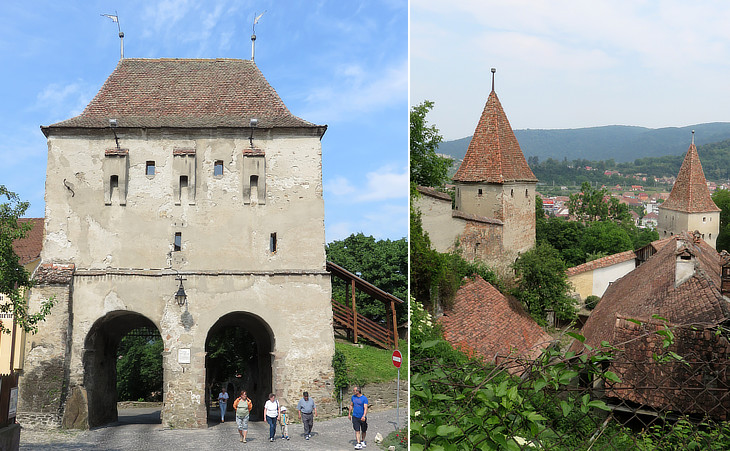 They settled on a hill, called the City Hill. Following incursions by the Tatars in 1241, the fortified settlement on City Hill was reinforced with walls, guarded by towers, which were extended to surround the entire plateau at the end of the 14th century. The town developed commercial activities thanks to the powerful guilds of craftsmen. Each guild was responsible for the construction of a tower and its defence. (..) In 1840, the merchant guilds lost the monopoly granted to them in the 13th century, and they disappeared. UNESCO
The guilds' role in the defence of the town can be noticed also at Kronstadt (Brasov). 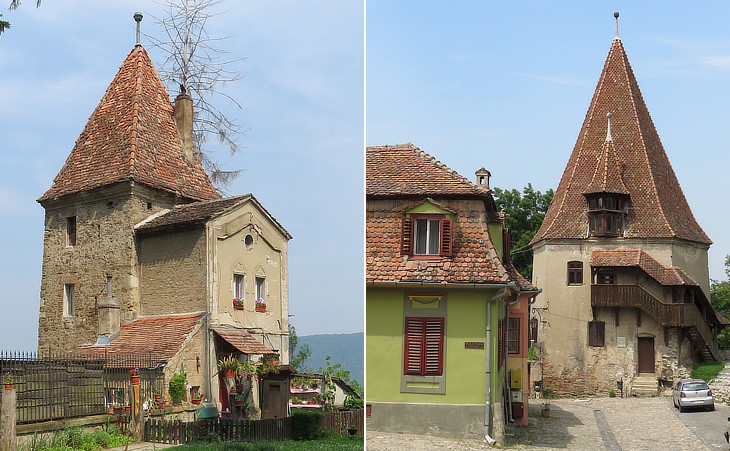 A wall with interval towers, encloses the Citadel plateau. The different phases of construction from the 12th century to the 16th century can be clearly identified. It rises to a height of 8-10m between the Ropemakers' Tower and the Butchers' Tower, the best preserved section. Nine towers out of the original fourteen still stand and can be distinguished by their shapes. (..) The Lower Town lost its fortifications in a subsequent expansion phase. UNESCO 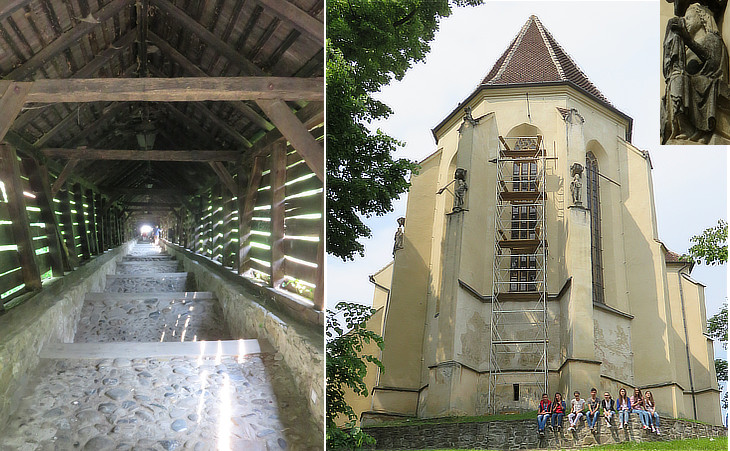 (left) Scala Scolii (Staircase of the Schoolchildren); (right) Biserica Din Deal (Berg-Kirche, Church on the Hill aka St. Nicholas'); (inset) one of the statues

On the top of the Burg (to the S.) are the Berg-Kirche, of the 15th cent, and a Gymnasium containing a good collection of antiquities (view from the turret). Baedeker
Among the monuments in the historic centre of Sighisoara, it is worth mentioning the Church of Saint Nicholas, an edifice typical of the Gothic architecture of Transylvania. It is perched on the hill, and can be reached by a ramp staircase of 175 steps, called the Staircase of the Schoolchildren. It has been protected by a wooden roof since 1642. The Church was constructed in different stages between the 14th and 15th centuries over the remains of a Roman building. It has a hall-type plan with a polygonal apse. The decorative sculpture on the facade reflects Central European influences. UNESCO 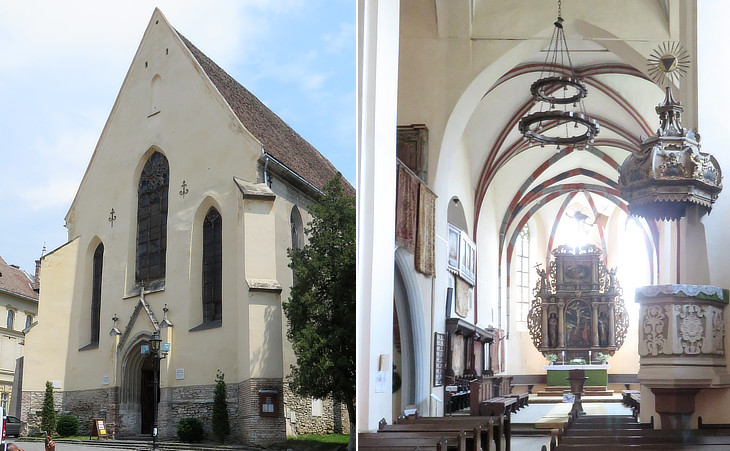 In 1866, when Hungary transferred the constitution of the Komitat (district) to Transylvania, Sighisoara became the capital of the Targu Mures/Neumarkt district, and the Dominican monastery was pulled down to make way for the new town hall. The Church of the monastery is a 13th century Gothic monument of the hall type with bare facades. Inside is a Baroque altar dating to 1680. UNESCO 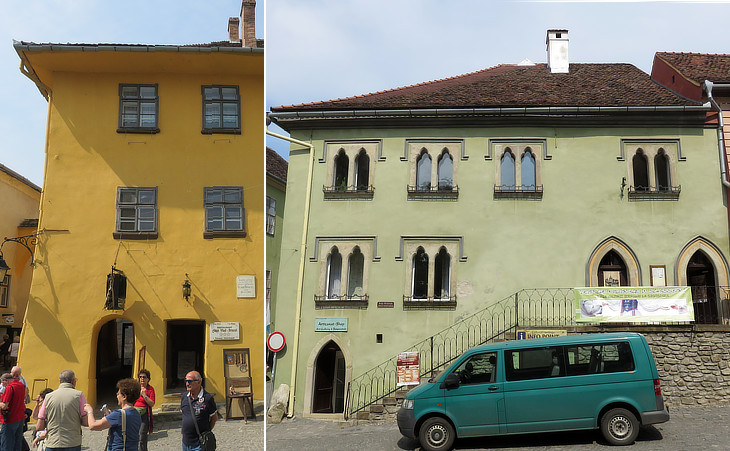 During the XVIIth century, the town of Sighisoara suffered from a succession of tragic events. The population was reduced by almost half as a result of two plague epidemics. In 1676, a fire destroyed three-quarters of the town (..) and the entire town was shaken by an earthquake in 1838. (..) Sighisoara remained somewhat on the fringe of economic development in the 19th century and it was able to safeguard its historic centre from extensive transformations. UNESCO
Dracula House is the supposed birthplace (1431) of Vlad III Dracul. The son of the voivode of Wallachia, Vlad aka the Impaler, became famous for the cruel punishment of his enemies.
The Venetian house, named after the exterior appearance of its windows, was probably built at the beginning of the XVIIth century. Its current aspect is due to a XIXth century modernization. 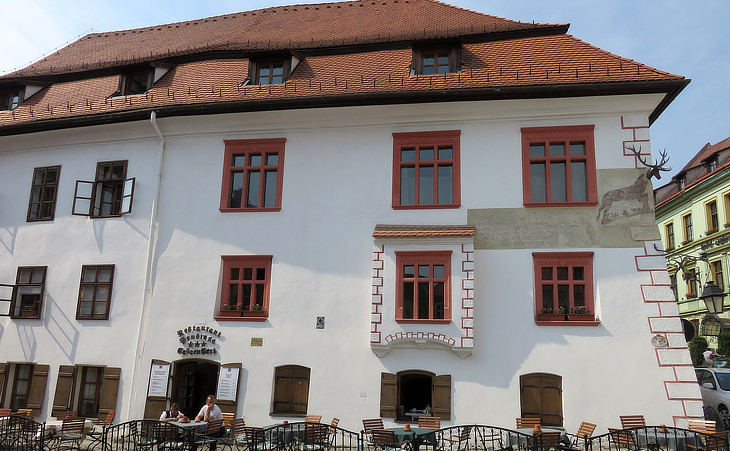 The original Deer House was probably built in the XVIIth century, and it was named after the hunt trophy fixed on the corner of the building. It was largely restored in 1988-2001. 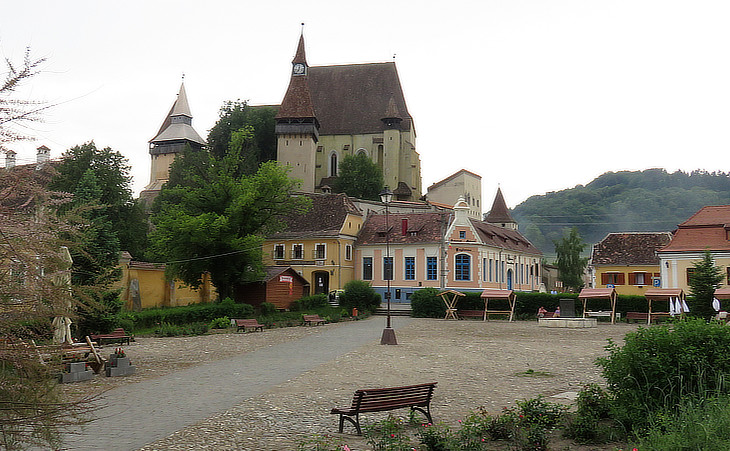 Overall view of the fortified church

Almost every village churchyard is surrounded by a strong wall, with battlements and port-holes, and they are often strengthened by towers and other means of defence. The history of Transylvania gives but too clear an explanation of the causes of these precautions, and their frequent occurrence brought the picture of former times very forcibly before us. It requires little imagination to conceive the wild Moslem hordes pouring down the passes of the Carpathians perhaps sent to enforce the tribute which some bold, but luckless prince had ventured to refuse.
John Paget - Hungary and Transylvania - 1839
South of Sighisoara, Biertan, which yields excellent wine, has a fine fortified church of the 16th cent.; it was the seat of a Prot. bishop from 1572 to 1867. Baedeker
Biertan has retained its medieval layout and structure almost complete. (..) There are no later structures that disturb the harmonious relationship between the defensive ensemble, the town, and the surrounding natural environment.
UNESCO documentation supporting the inclusion of Biertan in the World Heritage List in 1993. 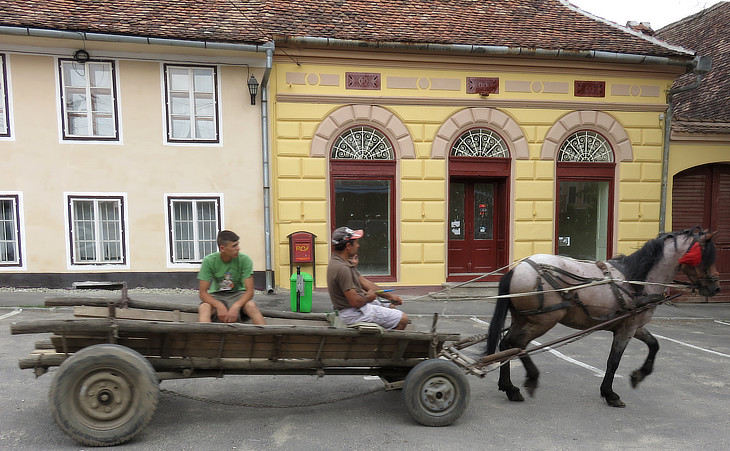 Biertan is still a countryside village

The Saxon settlers introduced into Transylvania a type of colony adapted to the position of the villages, most of which stood on hills that were easy to reach and protect. The arable land was divided according to a Flemish system and the compact villages, with a church in the centre, were composed of houses with gardens closely aligned in rows along the streets. Defending this type of village, which had certain advantages, was a constant preoccupation of the communities, and they were supported by the Hungarian sovereigns and the Church from the second half of the 13th century. UNESCO 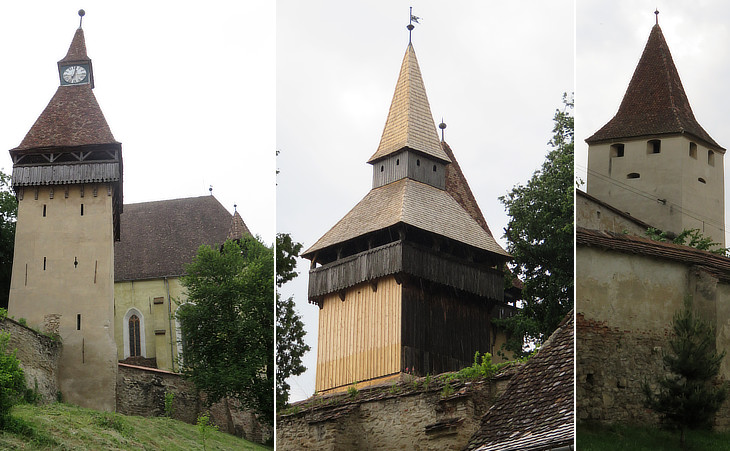 Towers on the hill

Up to the recent past, the church-fortresses as place of worship were the centre of life for village communities. The buildings set against the defensive walls housed the school and village hall. (..) The exceptional value of the Biertan ensemble is attributable to the fact that it is the best surviving and most representative example of a fortified church, of which there were once many in medieval Europe. (..) The first documentary reference to Biertan dates from 1283. In 1397 it was raised to the status of Oppidum (fortified town) and twenty years later the Hungarian King granted it the right to bear arms. (..) The church stands on a low hill, within the first circuit of defensive walls, equipped with four towers, which antedates the existing building. UNESCO 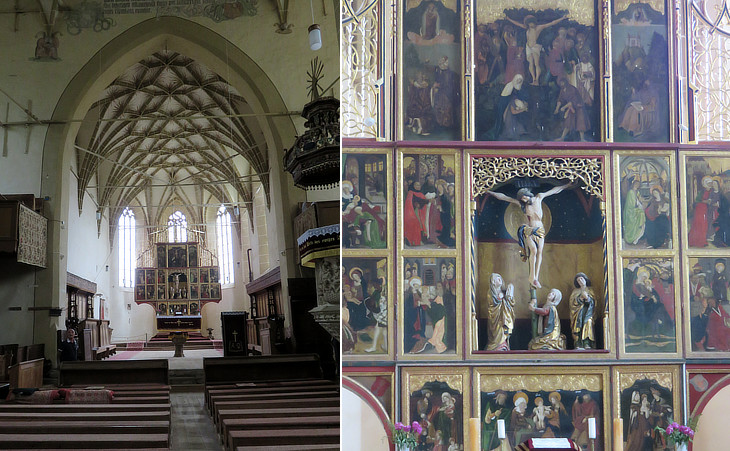 (left) Interior of the Church; (right) detail of the altarpiece

The church of Biertan first appears in documentary records in 1412, referring to a structure that antedates the existing Late Gothic hall-type building, which appears to have been completed around 1522/23. Despite some later modifications such as the Baroque north and south doors, the organ loft, and the baldachin over the pulpit, the interior retains most of its original appearance. Elements such as the pulpit itself (in transitional style), the altar table, the inlaid choir stalls, and the fonts are all contemporaneous with the building itself. Other notable features are the retablo (a 24-element polyptych) and three important works of sculpture. The building itself is largely built of brick, with door and window frames and some parts of the vaulting in stone. UNESCO